Amber Heard smirks, rolls her eyes and nibbles on cookies as she’s forced to listen to herself admitting on tape that she ‘clocked’ Johnny Depp in the face.

The 33-year-old actress was confronted with the bombshell recording as she sat down for a deposition during their bitter 2016 divorce.

As DailyMail.com revealed on Tuesday, it captures the then-husband and wife discussing a violent incident in which Depp claims he was struck by a bathroom door and punched in the jaw.

Heard denies slamming the door into him intentionally but apologizes on tape for deliberately hitting the Pirates of the Caribbean actor, pleading: ‘I just reacted and I’m sorry. It’s below me.’

Today, DailyMail.com can reveal the dramatic moment Depp’s attorneys confronted Heard with the recording and challenged her to come clean about attacking her Oscar-nominated ex.

In video footage obtained by this website, Heard looks increasingly uncomfortable – fidgeting, smirking and chewing on snacks – as her ‘confession’ is played back to a room full of lawyers. 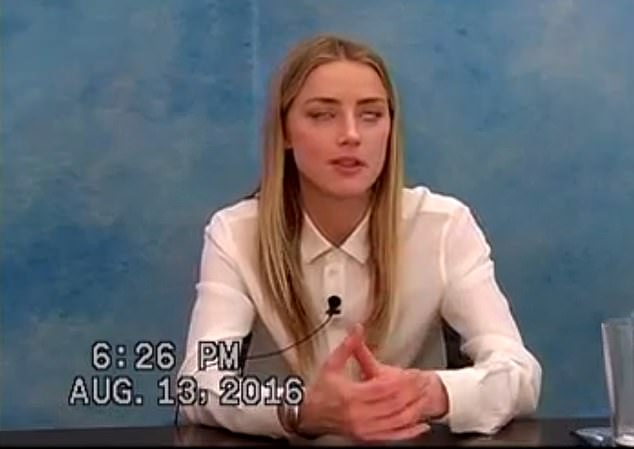 Amber Heard rolls her eyes as she listens to herself admitting she ‘clocked’ Johnny Depp in the face, in tape obtained exclusively by DailyMail.com 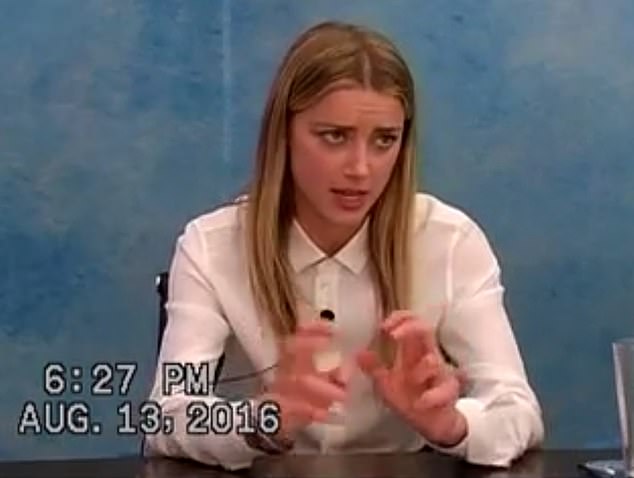 Today, DailyMail.com can reveal the dramatic moment Depp’s attorneys confronted Heard with the recording and challenged her to come clean about attacking her Oscar-nominated ex 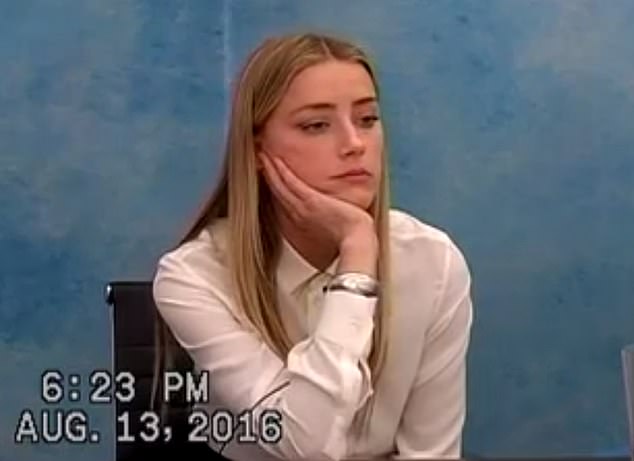 In video footage obtained by this website, Heard looks increasingly uncomfortable – fidgeting, smirking and chewing on snacks – as her ‘confession’ is played back to a room full of lawyers 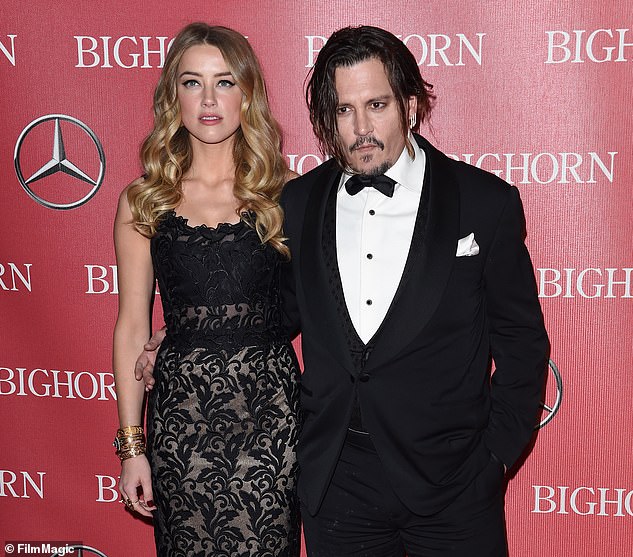 The 33-year-old actress was confronted with the bombshell recording as she sat down for a deposition during their bitter 2016 divorce. The then-husband and wife were discussing an incident in which Depp claims he was struck by a bathroom door and punched in the jaw

She shakes her head and rolls her eyes as Depp, 56, says on the tape: ‘I’d just been hit in the head with a f**king corner of the door. And then I stood up and then you f**king clock me.’

‘I was trying to escape from a room where Johnny was attacking me,’ Heard protests as the recording is paused.

Attorney Blair Berk, representing Depp, asks Heard repeatedly if she ever hit the father-of-two – and if she didn’t, why apologize?

But Heard denies being the aggressor during their toxic 18-month marriage and says the tape ‘misrepresents what actually happened’.

‘I’m trying to keep him out of, and then he runs the door over my toes trying to get into the room,’ she goes on. ‘I tried to push him out of it, which is what the hit is that is referred to.

‘And Johnny, whenever he was hit or touched at all, referred to it in these ways of punching or clocked or whatever.

‘And whether you discussed it with him or not, the last thing you do in talking to him afterwards or trying to reconcile with him is to get into what the definition of those words mean to him.’ 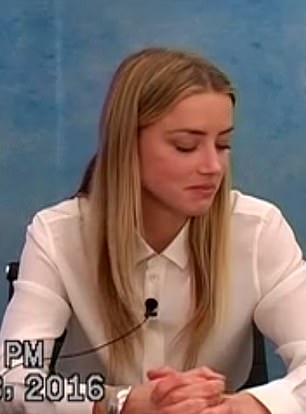 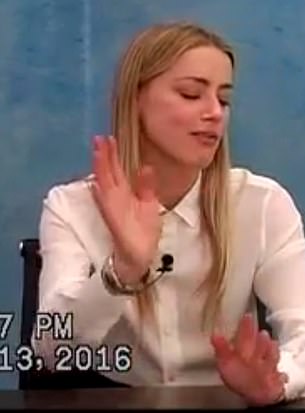 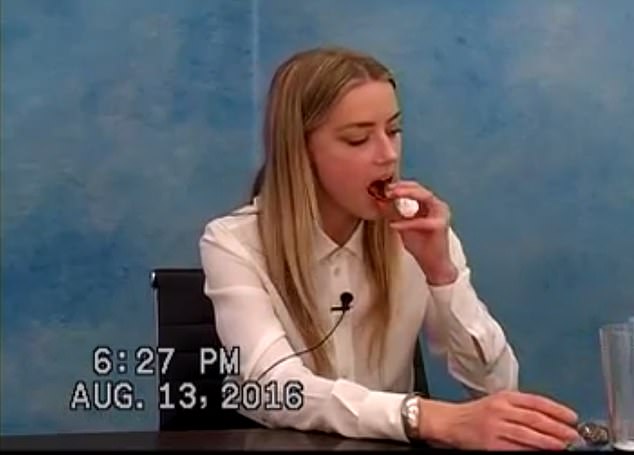 Despite her denials, Depp’s supporters say the audio is just one of several taped ‘confessions’ that proves Heard was the domestic abuser throughout the doomed union, contrary to her claims. Pictured: Heard nibbling on a cookie during the deposition 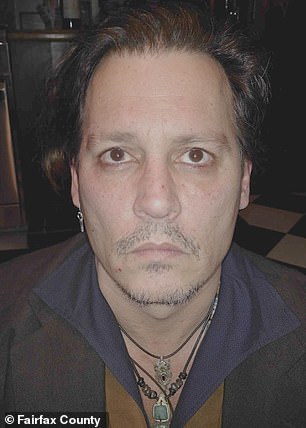 The bombshell tape suggests the Pirates of the Caribbean actor, 56, was hit so hard by the bathroom door that it knocked him off his feet. ‘I then stood up, I don’t even know if I said, I mean, I might’ve said like, what the f**k, you know, whatever. Cause I’d just been hit in the head with a f**king corner of the door,’ Depp protests. ‘And then I stood up and then you f**king clock me.’ As part of Depp’s $50m defamation case against Heard, he included images of his own bruised and battered face (pictured ) following Heard’s alleged attacks

Johnny Depp and Amber Heard marry in a private civil ceremony at their LA home, four years after they met as co-stars on the set of The Rum Diary. They celebrate with a lavish reception on a private island in the Bahamas that Depp bought in 2004 for $3.6 million.

Heard breaches Australia’s biosecurity laws after she and Depp fail to declare their two Yorkshire Terriers when they arrive on a private jet for the filming of Pirates of the Caribbean: Dead Men Tell No Tales. Charges of illegally importing animals are dropped but Heard admits falsifying quarantine documents and is placed on a $1k one month good behavior bond.

Heard files for divorce after 15 months of marriage, citing irreconcilable differences. Four days later a judge issues a temporary restraining order against Depp over domestic violence allegations. Pictures of Heard’s alleged injuries hit the tabloids but the LAPD finds no evidence of a crime.

Heard retracts her allegations as she and Depp reach a $7 million divorce settlement. Their marriage was ‘intensely passionate and at times volatile, but always bound by love,’ the former actors say in a statement. ‘There was never any intent of physical or emotional harm’.

The Washington Post publishes an op-ed by Heard, an ambassador for women’s rights at for the American Civil Liberties Union, urging support for women who suffer domestic violence. ‘Two years ago, I became a public figure representing domestic abuse, and I felt the full force of our culture’s wrath for women who speak out,’ Heard writes.

Despite not being named in the article, Depp files a $50 million defamation suit in Fairfax Circuit Court, Virginia saying it insinuated he was an abuser and got him fired from the Pirates of the Caribbean franchise. Depp dismisses Heard’s allegations as a ‘hoax’ and claims he was actually the victim of her violence.

Heard files a motion to dismiss the complaint, cataloging more than a dozen instances of abuse between 2012, when she moved in with Depp, and the May 2016 bust up that preceded their divorce. She refers to him as ‘the monster’ in the 300-plus page filing.

Depp hits back against the motion to dismiss claiming Heard painted bruises on her face, scrubbed metadata and fabricated evidence against him. He denies ever abusing any woman and says of her allegations: ‘I will continue to deny them for the rest of my life.’

She adds: ‘If he was ever pushed, it was a clock – he called it a cold-clock. I mean, he was just very dramatic about everything about it.’

Despite her denials, Depp’s supporters say the audio is just one of several taped ‘confessions’ that proves Heard was the domestic abuser throughout the doomed union, contrary to her claims.

It’s not known when or where it was recorded, however the pair had a habit of recording their arguments, often consensually, as a form of DIY marriage guidance so they could play the tapes back later.

In a previous exchange, published exclusively by DailyMail.com in January, Heard admits ‘hitting’ the Oscar nominee, and pelting him with pots, pans and vases.

Weeks later we published a further clip in which Heard, an ambassador for women’s rights and an outspoken domestic violence advocate, taunts Depp for fleeing a violent confrontation, telling him: ‘You are such a baby. Grow the f**k up Johnny.’

The latest developments come as the warring A-listers prepare to square up again in two separate defamation lawsuits on either side of the Atlantic.

On March 23, Depp will take on News Group Newspapers in London over a 2018 article in The Sun newspaper that described him as ‘wife beater’ and allegedly damaged his standing as a globally famed movie star, with Heard scheduled to give testimony.

And, later this year, hostilities will switch to Virginia where Depp has filed a $50 million suit over a Washington Post op-ed in which Heard lamented her experiences as a domestic violence victim, an article that didn’t mention her ex by name but allegedly led to him losing his role of Captain Jack Sparrow.

‘Whatever Amber Heard is eating in her August 13, 2016 deposition, it is certainly not truth serum,’ Depp’s attorney Adam Waldman said of the newly-emerged video footage. ‘And she ignores the fact that bathroom doors open in, not out.’

Waldman told DailyMail.com: ‘We have assembled a giant, ever-growing body of evidence to expose her ever-growing abuse allegations as a hoax.

‘But our star witness turns out to be the serially violent Amber Heard herself, perjuring remorselessly in a sworn 2016 video deposition that we’ve just obtained, and then exposing her diabolical lies with her own friends and employees’ testimony, subsequently discovered audio recordings, text messages, CCTV footage, TV appearances, multiple frauds, attempts to suborn perjury and documented abuse of others.’

A spokesman for Heard’s legal team hit back, however, saying: ‘Ms. Heard’s testimony is clear that, in the incident described, she was attempting to escape an assault at the hands of Mr. Depp.

‘It is unfortunately common for men who have committed domestic abuse to present themselves as the ‘victim’ when nothing could be further from the truth.’

However they split less than two years later when Heard filed for divorce and obtained a temporary restraining order against Depp for allegedly beating her up, an accusation he has repeatedly denied.

Amid a torrent of headlines and blood-curdling allegations, the pair agreed to a $7 million divorce settlement in August 2016 – which Heard says she donated to charity.

However their back-and-forth feud reignited when she wrote in her December 2018 op-ed: ‘I became a public figure representing domestic abuse, and I felt the full force of our culture’s wrath for women who speak out.’

The article didn’t mention Depp by name but he sued regardless, arguing he was the victim of an ‘elaborate hoax’ instigated by Heard to generate positive publicity and advance her career.

Heard responded with a lurid 300-page filing of her own, cataloging the ‘horrific’ abuse she claimed to have suffered at Depp’s hands, describing him as ‘the monster’ and recalling many of the allegations she made during their divorce.

The case is due to be heard in August.