Just as striking on canvas as they are in the border, it’s no wonder sunflowers have featured in countless paintings over the centuries. But engraver Tirzah Garwood thought she and her husband, the renowned painter Eric Ravilious, might have been a bit over-enthusiastic when it came to planting them.

‘What with the number of earwigs they contained and the unfriendly height they grew to, we felt that perhaps we had rather overdone it,’ she admitted in her autobiography, Long Live Great Bardfield.

Garwood and Ravilious moved to the picture-postcard village of Great Bardfield in Essex in 1931, where they shared a house with fellow artist Edward Bawden and his wife Charlotte. 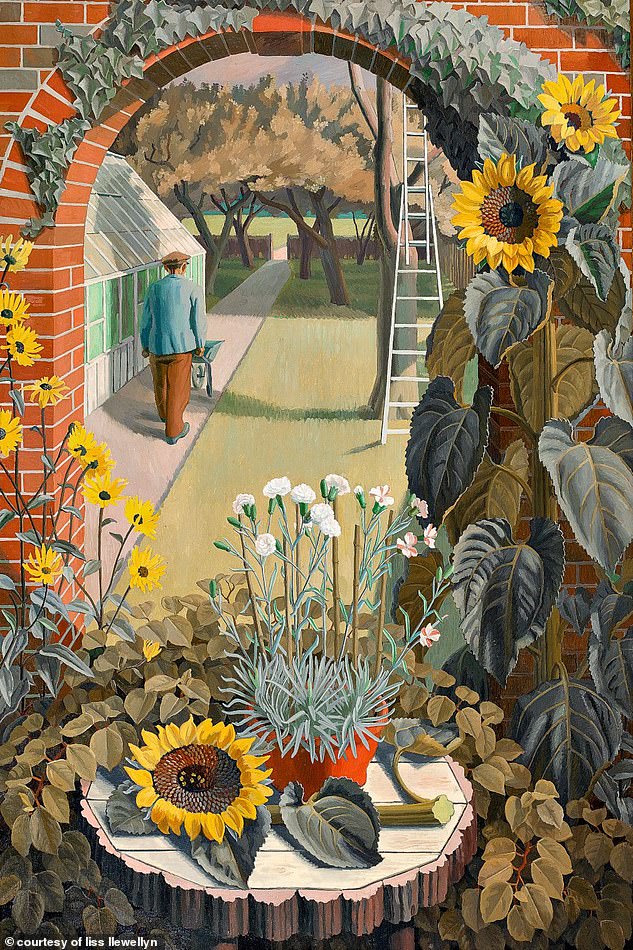 The Garden Museum in London is currently exhibiting work from the golden age of garden painting. Pictured: The Garden by Charles Mahoney

Other friends came and went for long visits and helped dig a garden where there had been a yard that was, as Garwood wrote, ‘feet deep in years of rubbish’.

One of those friends, Charles Mahoney, who had a passion for giant architectural plants, painted the sunflowers that Bawden planted. ‘There was a row along the wall by the lavatory,’ reminisced Garwood.

‘And halfway up the garden, the cream of the collection, a monstrous double sunflower grew to huge maturity. So large and so splendid was it that looking up to its vast centre I felt that I should never be satisfied with any future sunflower I might grow, this was the limit.’

In this peaceful period between the wars, gardening and art became intertwined and an exceptional number of artists were serious plantsmen.

Now an exhibition at The Garden Museum in London explores this golden age of garden painting, when artists sought sanctuary in turning back to nature after the traumas of the First World War.

Country living was cheap and, for those old enough to have been at the Front, this was the vision of England for which they had fought.

Most renowned was Cedric Morris – although he was declared medically unfit to fight – who achieved equal stature as artist and plantsman, cultivating over 90 new irises.

Paul Nash considered himself lucky to be alive after being invalided back to London with a ‘Blighty one’ (a wound serious enough to warrant being sent home, but not fatal or permanently disabling), just days before most of his unit was killed in 1917.

His younger brother John, serving in the Artists Rifles, based his most famous painting, Over The Top (now in the Imperial War Museum), on his experience of a counter-attack that same year in which 68 out of 80 men in his unit were killed or wounded in the first few minutes.

Artists featured in the exhibition include Mary Adshead and Gerald Leet who was assistant drawing master at Eton. Pictured: Gerald Leet’s Yellow And Pink Lilies On A Window Ledge Overlooking The Sea

The Nashes were both appointed official war artists, and painted their Western Front pictures in a rented seed shed at Chalfont St Peter in Buckinghamshire. John Nash later bought a farmhouse in Essex.

Stanley Spencer, after serving in the Royal Army Medical Corps, painted cottage gardens and council houses in his home village of Cookham, Berkshire, which was his idea of heaven on earth.

Ivon Hitchens, having in 1939 bought a gypsy caravan for £20 and six unkempt acres of rhododendron, silver birch and bracken in rural Sussex, moved there after he was bombed out of his London home and studio during the Blitz.

He found inspiration there for the rest of his life. (The caravan survives to this day and is used by his artist son John.)

Clare Leighton, the renowned wood engraver, was the sister of Roland Leighton, the poet who was killed in 1915 and immortalised by his fiancée Vera Brittain in her war memoir Testament Of Youth. 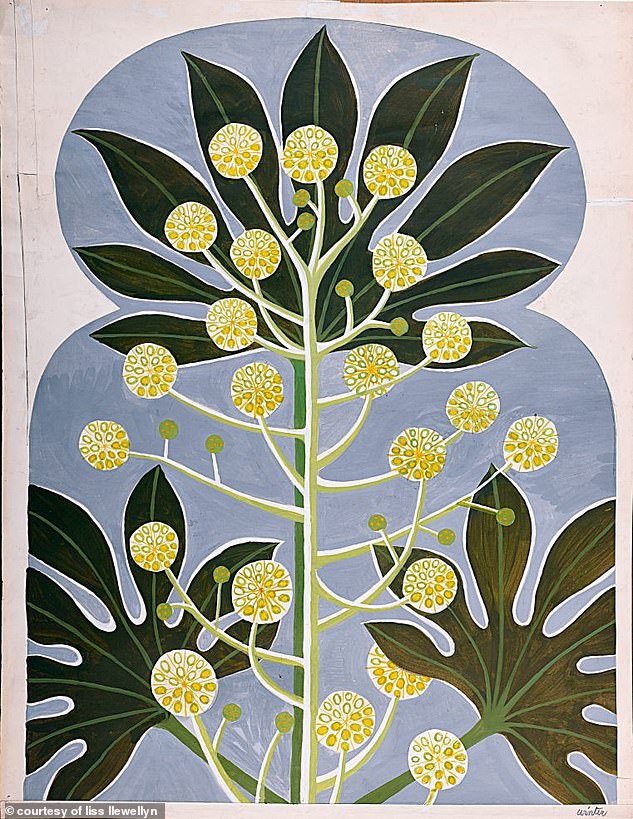 Mary Adshead’s Winter (pictured), joins the likes of Douglas Percy Bliss who had much of his work stolen during the Blitz

Clare created a flourishing garden in the 1930s out of a plot of rough meadowland ‘housing only larks and field mice’ in the Chilterns, and told the story in her classic book Four Hedges: A Gardener’s Chronicle.

‘To be able occasionally to shut our eyes to weeds is a great art,’ she wrote. ‘Let us relax in our gardens… let us “poddle” in them. We waste else the very beauty for which we have worked.’ (The Leightons’ father Robert was the first literary editor of the Daily Mail.)

Other artists featured in the exhibition, less well known today, include Mary Adshead, who also worked as a muralist; Douglas Percy Bliss, much of whose work was stolen during the Blitz; and Gerald Leet, assistant drawing master at Eton.

Some found sanctuary in suburbia, celebrating lines of washing, rickety sheds, dustbins under snow, sparrows in trees and children playing.

Harry Bush – almost forgotten today but known then as ‘the painter of the suburbs’ – painted the quiet back gardens that he saw from the upstairs window of his semi in the south-west London borough of Merton.

Sadly, when he returned to that subject to paint his best-known work A Corner Of Merton, 16 August 1940 – now in the Imperial War Museum – it was to depict a familiar tree, blasted by a bomb, shattered windows and gardens filled with rubble. Sanctuary was suspended for the duration.

Sanctuary: Artist-Gardeners 1919-1939 is at The Garden Museum, London, until 5 April, see garden museum.org.uk.

BRILLIANT RAJASTHAN TOURISM AD : You won't be able to wait...

‘Big cat’ on loose in North London after escaping from mansion...