To the very end, when he was 84 years old, battling cancer and in possession of a fortune worth upwards of £500million, Sol Kerzner was still making deals.

Not on the scale of those which gave the world Sun City, the sex and casino resort where, in the heyday of apartheid, white South Africans could safely consort with their black mistresses.

How could it? Sin City, as it universally became known, was the most outrageously vulgar pleasure palace ever conceived. 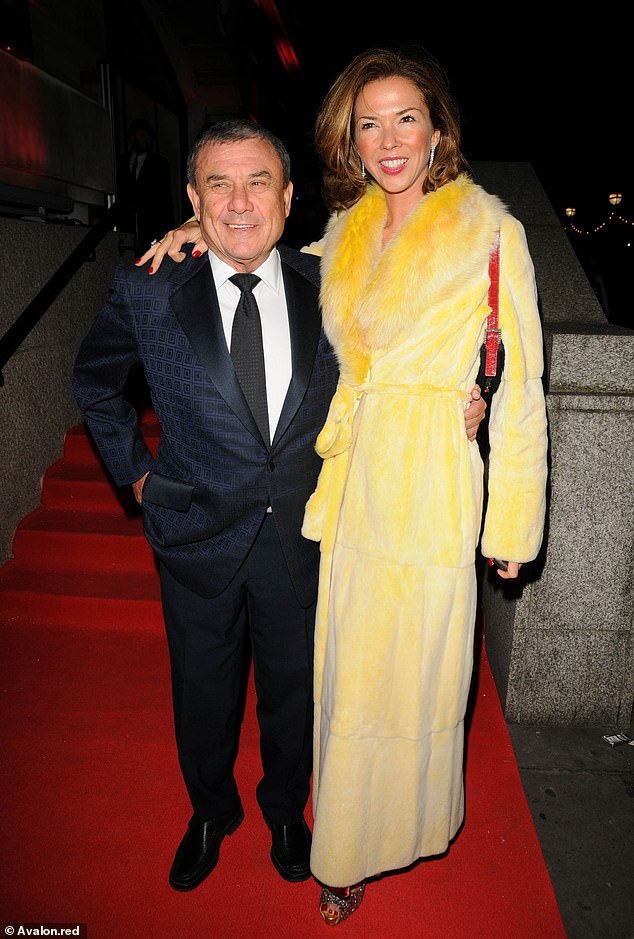 No, there was not much of a comparison to be drawn between Sin City and Leeukoppie, his 25-acre retreat near Cape Town to which he had retired — and then immediately started leveraging by building 48 luxury homes.

He was, though, still selling dreams, just as he had been when South Africa’s answer to Las Vegas was opened in 1981 — by Frank Sinatra — in a remote piece of bush a two-hour drive from Johannesburg.

His death on Saturday brings to a close a life marked almost as much by intrigue and scandal as by his achievements as a visionary whose imaginations and fantastical creations made him one of the greatest entrepreneurs the world has ever seen.

It also made him enormously wealthy with a reputation for high living, hard drinking — and rampant womanising, with four wives, including Miss World 1974.

For a short man, Sol oozed high- testosterone sex appeal. Asked once what he would have changed in his life, he answered gruffly: ‘Not much.’

He had clawed his way up from humble origins, the only son of Lithuanian immigrants who was beaten up so often as a ‘bloody Jew’ at school that he learned to box.

‘It wasn’t sport,’ he recalled. ‘It was self-defence.’

But along the way he became welterweight champion.

He was famously rude and crude, and rivals crossed him at their peril. Legends about him abounded. He was reputed to begin board meetings by asking: ‘What the f*** is going on?’

And woe betide the minions who fell short of his demands.

But this foul-mouthed persona concealed a brilliant and flamboyant business brain. 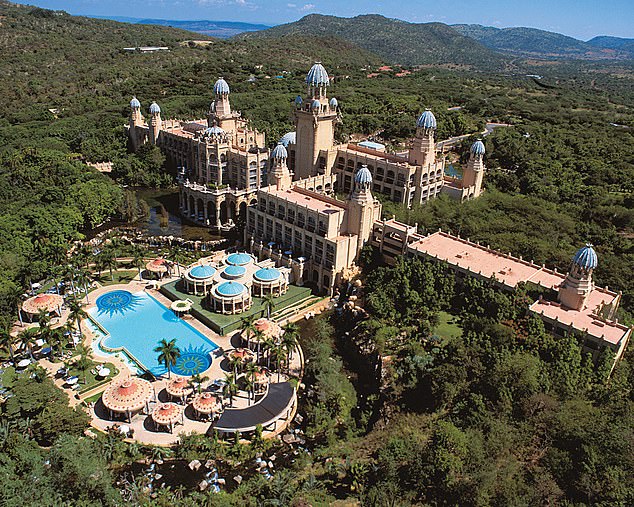 Aerial view of the Palace of​ the Lost City hotel, located near to Sun City near Pretoria, SA

The venues he developed, as fabulous in scale as they were controversial in execution, made him famous far beyond the boardroom.

His life and loves were regularly chronicled in the gossip columns, and the master of flash and brash knew how to make headlines to his own advantage.

Nowhere received more publicity than Sun City. It was the venue for world heavyweight boxing title fights and Miss World contests, and where Kerzner played host to celebrities including Elton John, Stevie Wonder, Liza Minnelli and the rock band, Queen.

But while it was a hedonist’s utopia, it was also a symbol of apartheid South Africa and was boycotted by many stars.

Those who did perform there attempted to justify it by claiming they were not performing in South Africa but in a nominally independent black homeland and so not breaking the international cultural boycott.

It was Kerzner’s vision to transform the scrubby veld in Bophuthatswana into a vast fantasy theme park with artificial volcanoes, simulated earthquakes, man-made lakes, smoke-belching statues and exotic wildlife. 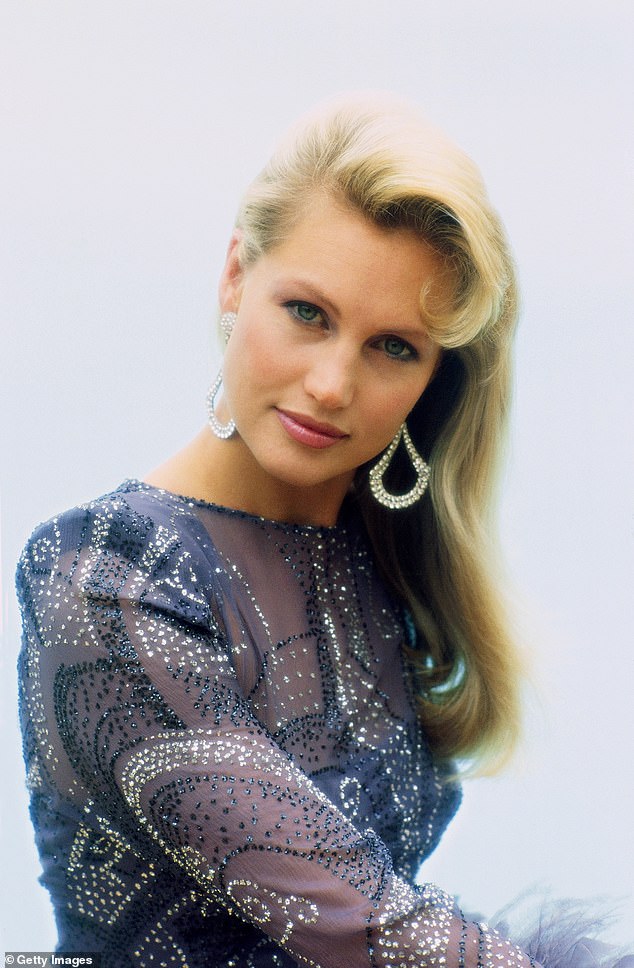 And it soon attracted a huge number of visitors drawn to the gaming tables and cinemas showing X-rated pornographic films, which were both illegal in white-ruled South Africa but permissable in this homeland.

It seems extraordinary that when South African townships were in flames, and economic and sporting sanctions threatened to isolate the country, Sun City flourished.

But it did, making Kerzner one of the richest men in Africa — but also among the most despised.

Ten years later Sun City was joined by Lost City, supposedly a lost jungle palace complete with pretend beach and wave machine, and where, to order, pythons popped out of the 18th hole on the golf course. 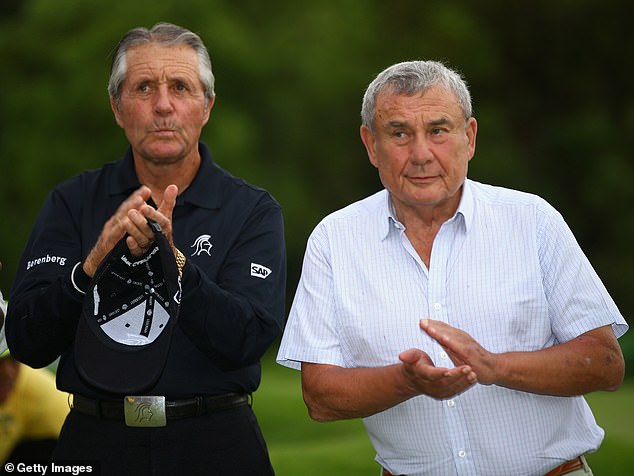 Gary Player with Sun City creator Sol Kerzner at the prize presentation after the final round of the Nedbank Golf Challenge at the Gary Player Country Club on December 7, 2014

Sol Kerzner’s private life was as colourful as his business dealings. Louche and extravagant, for his 50th birthday he chartered a jumbo jet and flew 150 friends to a four-day party in Mauritius.

During the flight, the stewardesses were replaced by strippers — something he claimed had been arranged by a friend without his knowledge.

In the same year, he purchased a £6.5million Challenger aircraft and installed gold-plated fixtures in its lavatory.

He was embroiled in bribery claims when he tried to replicate his Sun City success in another so-called independent homeland. He acknowledged that he had indeed paid over £500,000 but denied it was a bribe but rather extortion demanded by the homeland’s political leader.

Although charges were dropped, Kerzner quit South Africa for Britain, settling in a Buckinghamshire mansion where he was said to own everything he could see from his windows.

Not bad for a boy born in Bez Valley, a working-class Johannesburg suburb in 1935 where his parents ran a café and he was the youngest, with three older sisters. 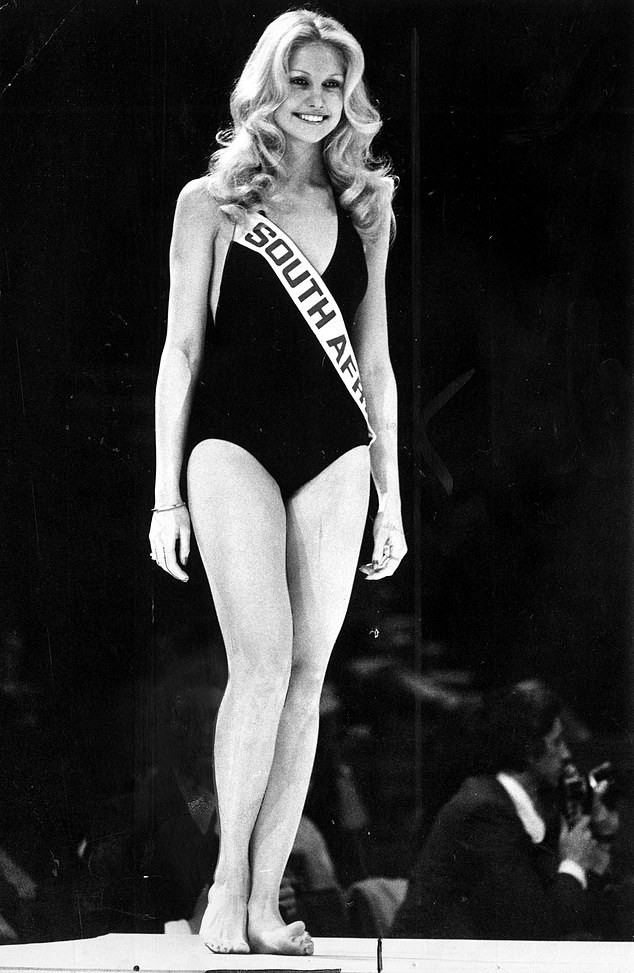 But he was bright and hard-working and graduated from university with an accountancy degree — and belts in boxing and wrestling.

While working for a firm of accountants in Durban he persuaded his parents — by then running a kosher boarding house — to take over the lease of the Palace Hotel where he worked at weekends supervising a nightclub in the hotel dining room.

It was the start of his empire. By 1968 he’d opened his first five-star hotel, unashamedly naming it after Los Angeles’s most glamorous neighbourhood, Beverly Hills.

Within a few years his Southern Sun group owned 31 hotels in South Africa and Mauritius.

His marital life was complex — but it was also marred by tragedy. With his first wife, Maureen Adler, he had three children; Andrea, Beverly and son Butch, who succeeded his father as chief executive of his father’s company in 2004 only to be killed in a helicopter crash two years later in the Dominican Republic.

That marriage was dissolved and he married Shirley Bestbier, who caught his eye as a receptionist in one of his hotels. They had two children but Shirley took her own life in 1978.

Two years later Kerzner married Anneline Kriel, who had been Miss World 1974. But that marriage too ended in divorce.

In the 1990s he began dating leggy American supermodel Christina Estrada, proposing to her on Valentine’s Day 1994 during a break in a ski resort. ‘He took out a jewellery box and handed it to me,’ she later recalled. ‘While I stared at it, he asked me to get engaged and married.’

There was no wedding. Instead, in 2000, Sol married Christina’s friend and fellow model Heather Murphy, a whippet-thin, glossy New Yorker with a mega-watt smile and 35 years his junior.

Life was good and very, very luxurious. Their neo-Georgian house, close to the Beckhams, Simon Cowell and Robbie Williams, was stuffed with expensive artworks: four enormous Warhols of the Queen dominated one room and a Chagall hung over a fireplace.

Then there was the live-in housekeeper, the chauffeur to whisk Heather to her girly lunches and a gardener who came every six weeks to change all the flowering plants for fresh ones.

For her 40th birthday party, Kerzner booked the Dorchester Hotel and hired singers Donna Summer and Natalie Cole as the entertainment.

The following year, her 41st birthday celebration at Annabel’s nightclub, was notorious for the fracas between actor Hugh Grant and PR man Matthew Freud.

It was around this time that Sol started joking that he had never gone out with a woman in her 40s before. It turned out to be prescient, and the couple separated. In 2011, Heather filed for divorce, citing unreasonable behaviour.

Throughout the marriage, Kerzner continued to accumulate riches and resorts, buying Paradise Island in the Bahamas and spending over £1billion building the Atlantis resort that boasted the world’s biggest man-made aquarium and marine park and was the Bahamas’ largest employer.

He set up the One & Only hotel group and in 2008 made his biggest splash of all, the £1.3billion Atlantis — a replica of a Mayan temple with almost 3,000 rooms — on a man-made island in Dubai.

Its £17million launch party was the most expensive ever and featured Kylie Minogue and Michael Jackson as well as the world’s biggest fireworks display which was visible from space.

Kerzner was knighted by the Queen in 2010. Not bad for a skinny kid from the wrong side of town who just wanted the world to have fun.

Trump warns America to brace for a ‘lot of deaths’ in the coming week as US virus cases pass 300,000

Trump warns America to brace for a ‘lot of deaths’ in...