Pigs CAN fly: Astonishing moment an eagle swoops down and carries off a piglet before eating the unlucky porker

Astounding photos prove that pigs can fly after a massive eagle swoops down and carries one off.

The remarkable encounter, captured by a photographer in Australia, shows a pair of huge sea eagles carrying a pig over a lake before settling down to feast on the unlucky animal.

Clarke Espie, 75, was driving back to his campsite in the Cromarty Wetlands in his native Queensland when he heard a high-pitched shriek from the skies above.

Instinctively grabbing his camera, Espie was shocked to see a piglet screaming though the air in the clutches of the bird. 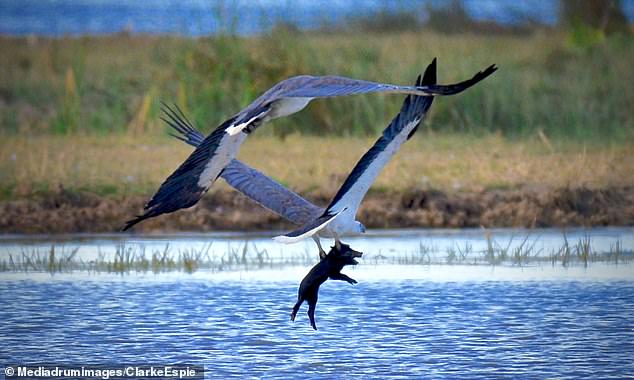 Clarke Espie, 75, took the photographs in the Cromarty Wetlands in Queensland, Australia. The piglet dangles above the water as the bird carries the animal off 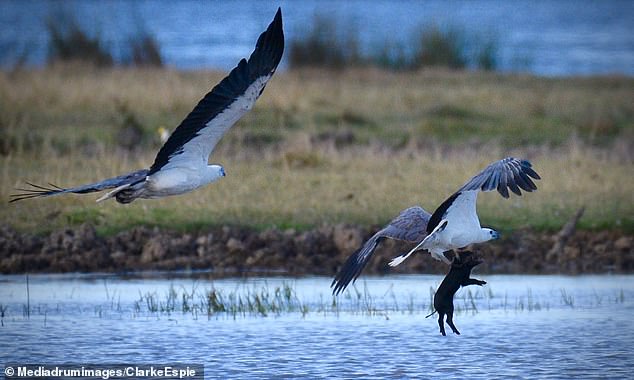 ‘I had been invited to capture the unique and diverse birdlife inhabiting these world class wetlands,’said Espie, who was a commercial diver and documentary-maker for 35 years.

‘Little did I imagine witnessing two massive sea eagles swooping low over my vehicle, one with a feral pig firmly gripped in its powerful talons.

‘Despite its powerful wings, the sea eagle struggled to gain altitude before landing its prey upon a small island within the wetlands, where together the eagles shared the prey. 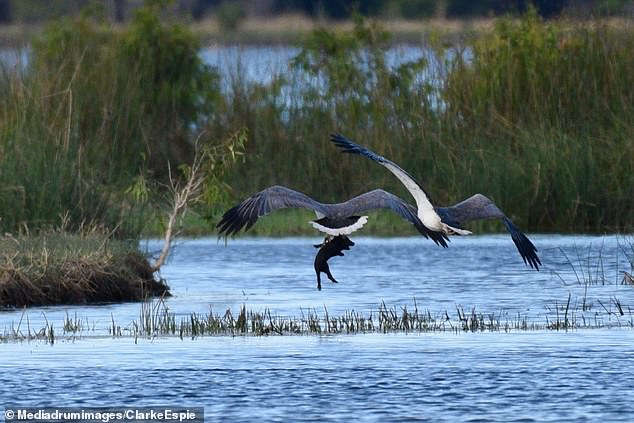 ‘I hurriedly snapped these images with a 500mm Telephoto lens as the sea eagles swept past.

‘It was one of the most unusual sights I’ve seen. I thought it must’ve been a fish at first but as soon as I focused, I could see it was a piglet. It must have weighed around five kilograms. Definitely not something I’ve witnessed before.’

The majestic white-bellied sea eagles – whose wingspan can reach over seven foot – are normally seen perched high in a tree or soaring over waterways and nearby land around the Australian coast. 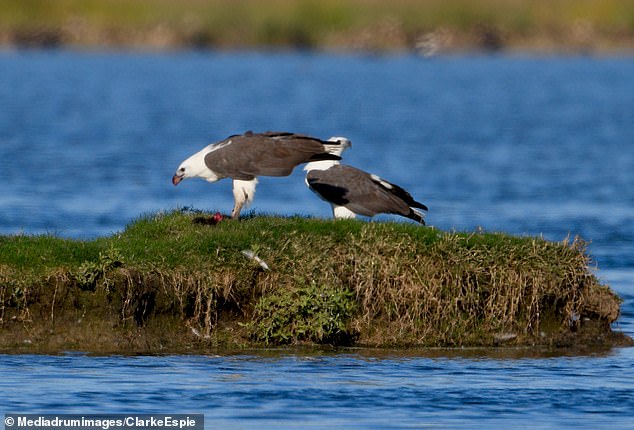 The white-bellied sea eagle feeds mainly on aquatic animals, such as fish, turtles and sea snakes, but it takes birds and mammals as well

Birds form permanent pairs that inhabit territories throughout the year. The white-bellied sea eagle feeds mainly on aquatic animals, such as fish, turtles and sea snakes, but it takes birds and mammals as well.

It is a skilled hunter and will attack prey up to the size of a swan, according to the Australian Museum.

Queensland’s feral pigs are commonly regarded as a pest as they spread weeds, degrade soil and water, and prey on native species damaging crops and stock. 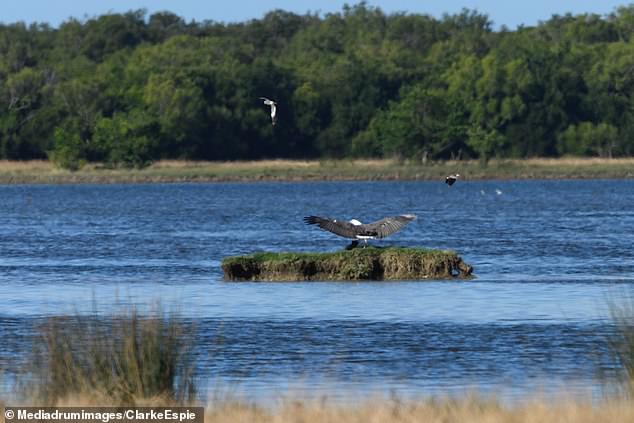 Despite its powerful wings, the sea eagle struggled to gain altitude before landing its prey upon a small island within the wetlands, where together the birds shared the prey

It is estimated that Australia has up to 24 million feral pigs.

The one-of-a-kind encounter will live long in the memory of the veteran photographer.

‘I’ve seen the imposing white-bellied sea eagle carnivore swoop in a shallow dive to snatch prey in its massive and powerful talons, taking fish, waterbirds, turtles, rabbits and flying foxes before now, but this was something very rarely seen,’ added Espie.

Doctor leading Boris Johnson’s coronavirus treatment is one of the country’s...

Vlog 1: Travelling to My Motherland (Pakistan) After SIX YEARS