Brian Wilson of the Beach Boys has disavowed a concert staged at a Donald Trump fundraiser in California on Sunday, insisting that neither he nor Al Jardine support the president in any way.

Wilson, 78, formed the band with his brothers Dennis and Carl, their cousin Mike Love, and their friend Al Jardine.

Following Carl’s death Love, now 79, was given permission to tour as the Beach Boys, and it was his band that played on Sunday for the president.

‘We have absolutely nothing to do with the Trump benefit today in Newport Beach. Zero,’ Wilson and Jardine told Variety through a spokesperson.

‘We didn’t even know about it and were very surprised to read about it in the Los Angeles Times.’ 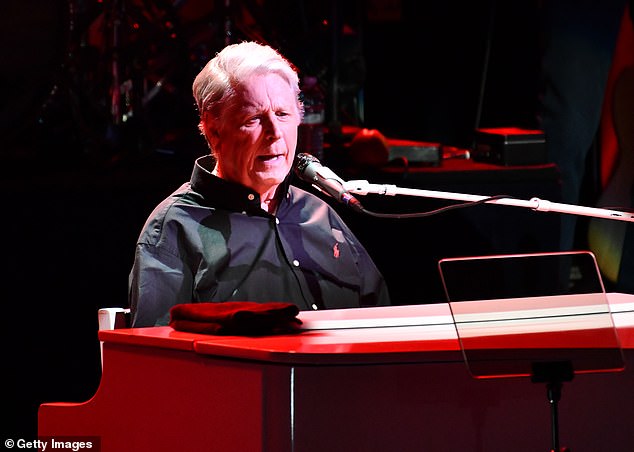 Brian Wilson, seen Sept 2019, says he had nothing to do with a Beach Boys concert for Trump 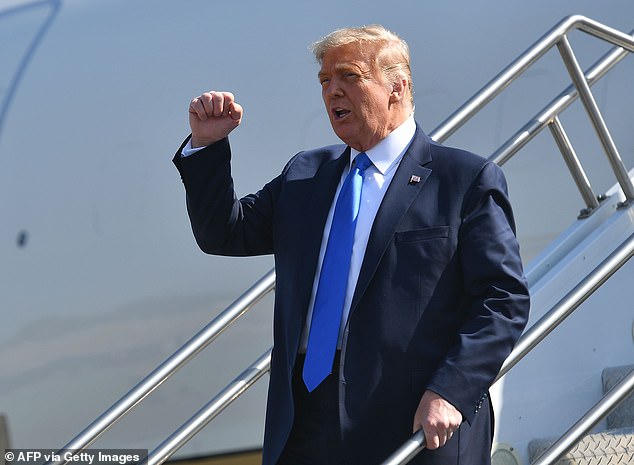 Trump, pictured arriving in California on Sunday, attended a fundraiser at a private house 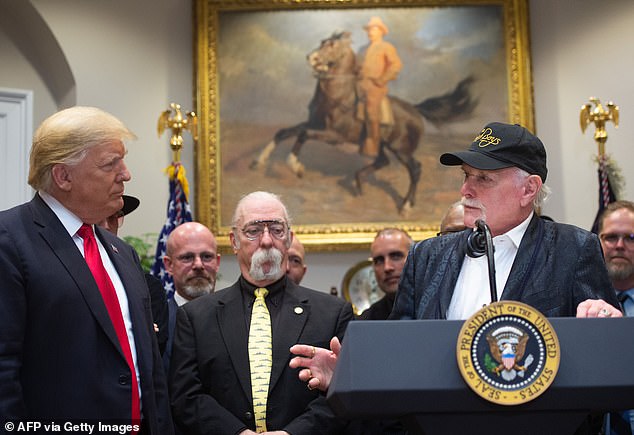 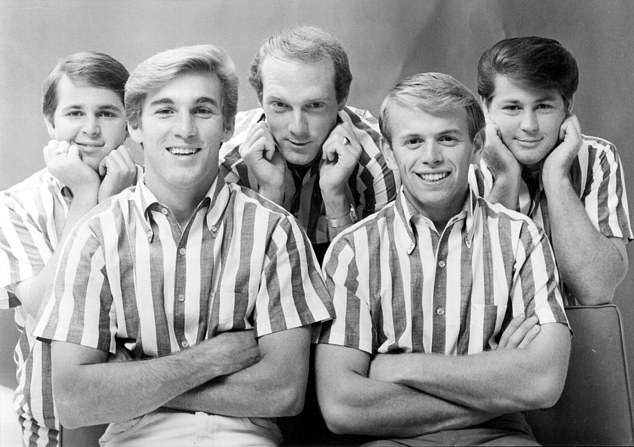 The Beach Boys are pictured in 1964. From left to right are Carl Wilson, Dennis Wilson, Mike Love, Al Jardine and Brian Wilson

The Los Angeles Times reported Sunday morning that the Beach Boys would be the main attraction performing for the president and his supporters at the Orange Country campaign event, with tickets ranging from $2,800 per donor to $150,000 a couple for co-chair status.

The last time all the surviving members performed together as the Beach Boys was for a 50th anniversary tour in 2012.

Wilson and Jardine have previously attempted to distance themselves from the Trump family.

In February the pair signed a Change.org petition after Love booked a headlining gig at the Safari Club International Convention in Reno, Nevada, where Donald Trump Jr, a hunting fan, was the keynote speaker.

‘This organization supports trophy hunting, which both Al and I are emphatically opposed to,’ Wilson said in a statement at the time.

‘There’s nothing we can do personally to stop the show, so please join us in signing the petition.’ 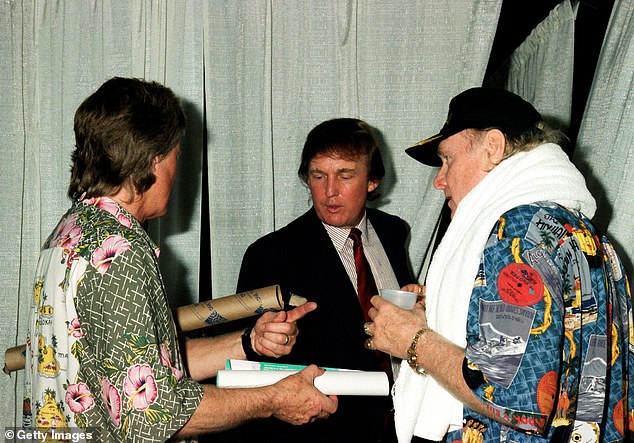 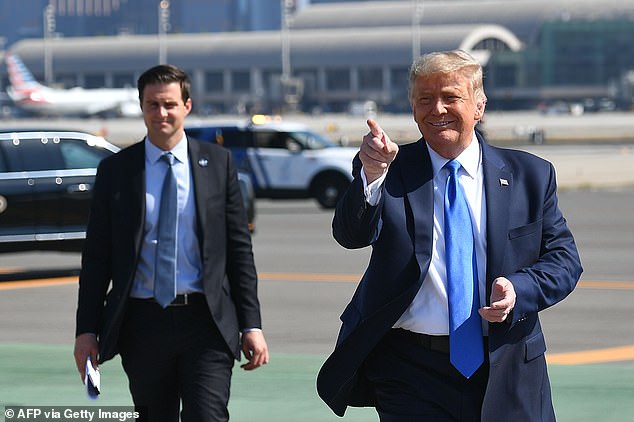 Tickets for Trump’s fundraiser in California on Sunday started at $2,800 per person

Love has been equally dogged in his defense of Trump.

‘I don’t have anything negative to say about the president of the USA,’ Love said in a 2017 interview with Uncut magazine.

‘We did attend the inauguration. That was a moving experience.

‘I understand there are so many factions and fractious things going on – the chips will fall where they may.

‘But Donald Trump has never been anything but kind to us. We have known him for many a year. We’ve performed at some of his venues at fundraisers and so on.’

Wilson and Jardine join a long list of musicians objecting to the president, and his use of their music.

In June relatives of the late Tom Petty objected to Trump playing Petty’s 1989 song ‘I Won’t Back Down’ at his first rally since March.

‘Trump was in no way authorized to use this song to further a campaign that leaves too many Americans and common sense behind,’ wrote his daughters Adria and Annakim, and his two former wives, Dana and Jane Petty.

Petty, who was a staunch guardian of his own artistic control, died in October 2017, aged 66, from an accidental overdose of prescription drugs. 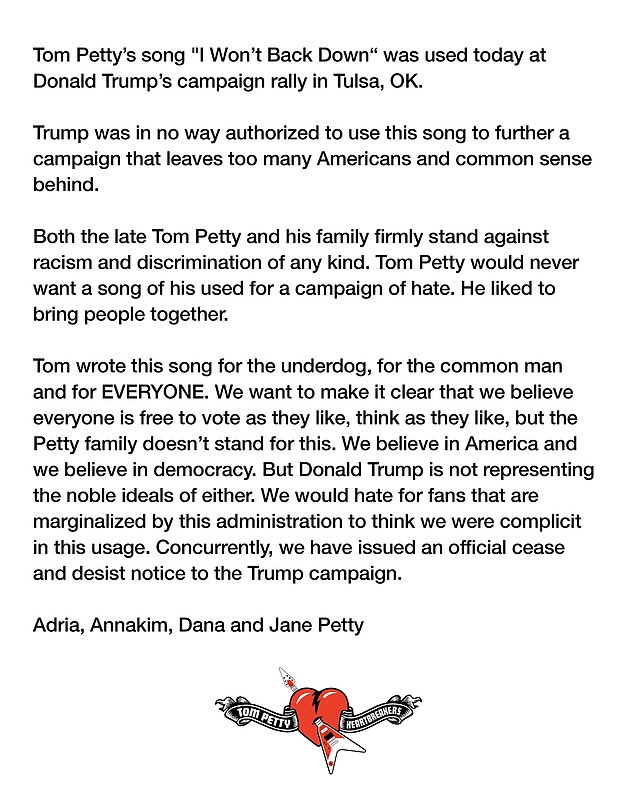 Tom Petty’s two daughters Adria and Annakim and former wives Dana and Jane disapproved of Donald Trump’s use of Petty’s song at a rally in Tulsa, Oklahoma 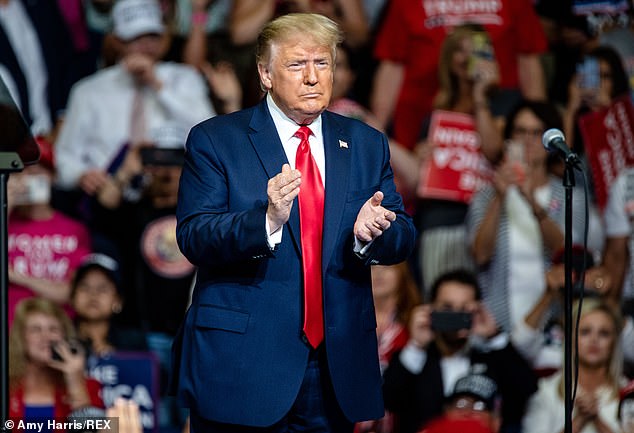 His relatives write: ‘Both the late Tom Petty and his family firmly stand against racism and discrimination of any kind.

‘Tom Petty would never want a song of his used for a campaign of hate. He liked to bring people together.’

The four women write that they would ‘hate for fans that are marginalized by this administration to think we were complicit in this usage.’ 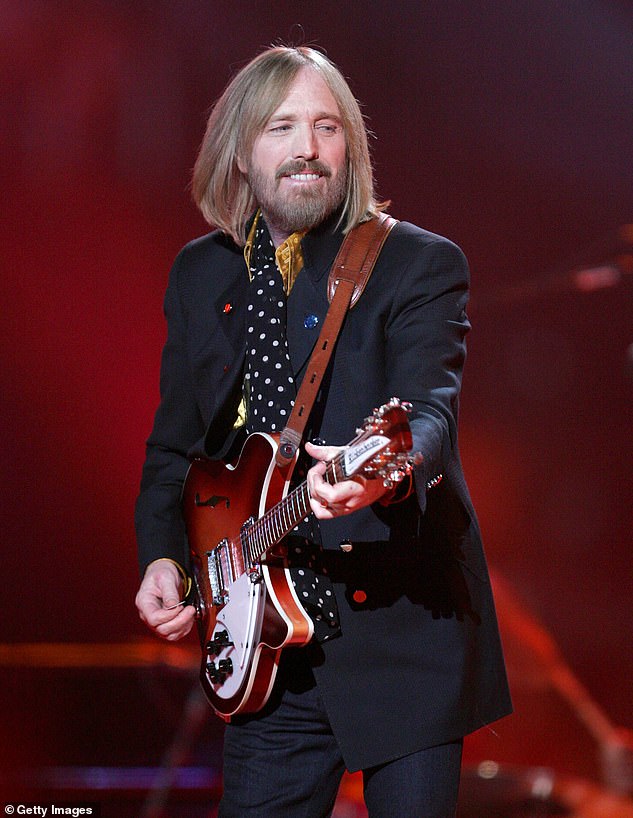 Tom Petty, who died in 2017, was a fierce defender of his own artistic rights

Top of the list of those musicians who have complained are the Rolling Stones, whose song ‘You Can’t Always Get What You Want’ was a feature of his 2016 campaign, and has now become something of an anthem for his supporters.

The Stones have tried, and failed, to make the campaign stop using it.

Others who have objected to their music being used by Trump at rallies include Pharrell Williams, R.E.M., Aerosmith, Neil Young, Adele, Rihanna and the Village People.

Harvey Weinstein is sued by former Project Runway assistant whom he...

DOCTOR APPOINTMENT AND COSTCO TRIP WITH MY FAMILY *BOUGHT MY SON...