It’s a move – referred to as ‘court-packing – that some liberals have pitched to offset the conservative tilt of the court under President Donald Trump, especially with his recent choice of Judge Amy Coney Barrett to replace the late Justice Ruth Bader Ginsburg.

‘They’ll know my opinion on court-packing when the election is over,’ Biden said Thursday as he arrived in Arizona for a campaign stop with running mate, Sen. Kamala Harris. 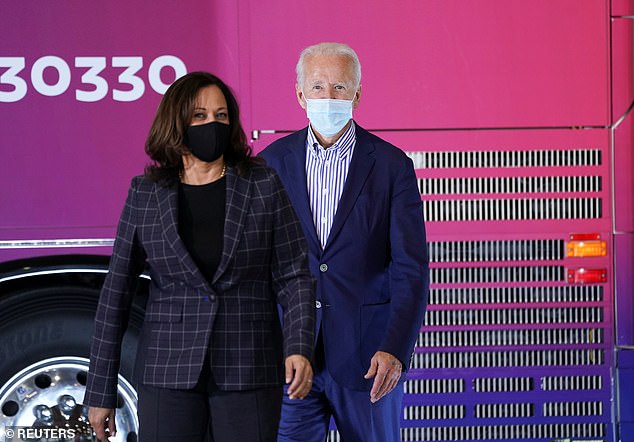 Democratic nominee Joe Biden (right) and his running mate, Sen. Kamala Harris (left), have both refused to answer questions about court-packing, which some liberals have proposed in order to offset the balance of a conservative Supreme Court under President Donald Trump 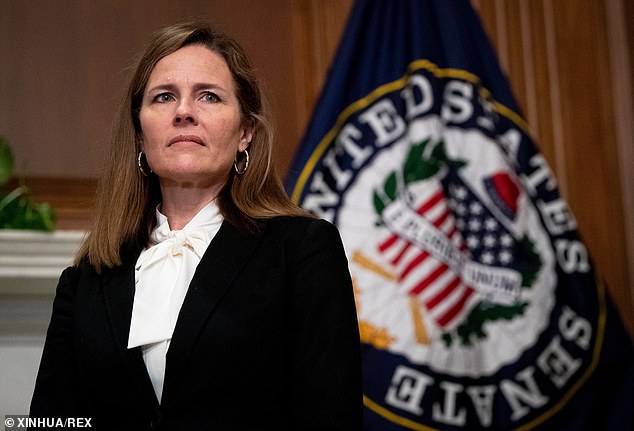 Liberals have pitched the idea of increasing the number of Supreme Court justices to dilute the conservative influence on the court, especially in light of President Donald Trump picking Judge Amy Coney Barrett (pictured) to replace the late Ruth Bader Ginsburg 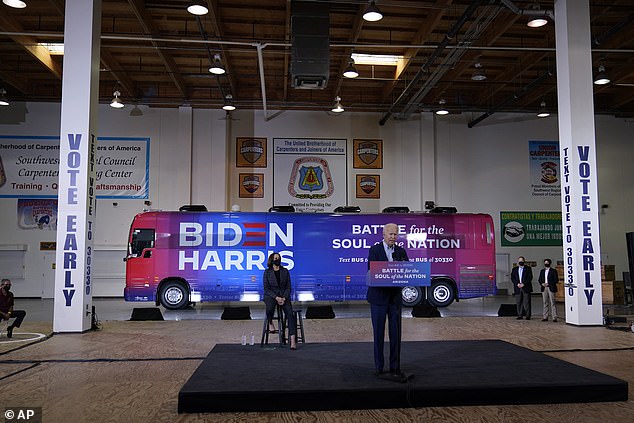 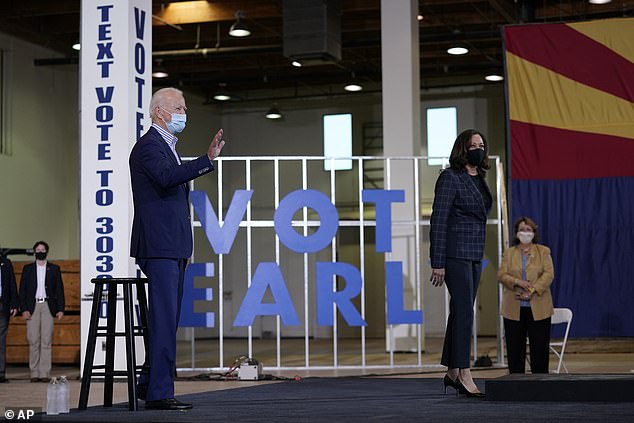 Joe Biden (left) waves to the crowd in Phoenix, as he stands alongside Kamala Harris (right) who he told the crowd was like a ‘little sister.’ ‘You gotta give me great credit for knowing how to pick ’em right,’ he said laughing

She was repeatedly asked to answer it by Pence.

‘I think the American people would really like to know if Judge Amy Coney Barrett is confirmed to the Supreme Court of the United States, are you and Joe Biden if somehow you win this election going to pack the Supreme Court to get your way?’ the vice president asked.

‘Let’s talk about packing the court,’ she told Pence.

‘Of the 50 people who president Trump appointed to the Court of Appeals, not one is black. You want to talk about packing a court? Let’s have that discussion,’ Harris said.

When Biden has previously been asked the question he’s also demurred.

‘I don’t blame you for asking it, but you know the moment I answer that question, the headline in every one of your papers will be about that, other than – other than focusing on what’s happening now,’ Biden told reporters Thursday. ‘The election has begun. There’s never been a court appointment once an election’s begun.’

Conservative activists have been enraged by Biden’s continued refusal to answer.

‘Today Joe Biden insulted voters by wimping out on the court-packing question, all but admitting that he would radically change one of the three branches of government without having the guts to actually say so,’ tweeted Judicial Crisis Network President Carrie Severino Thursday afternoon. 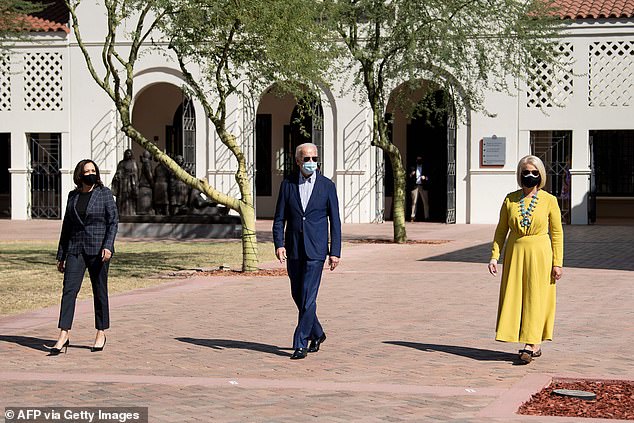 In Phoenix, Biden and Harris were accompanied by Cindy McCain, the widow of Republican Sen. John McCain. They visited the American Indian Veterans National Memorial together.

Cindy McCain filmed a tribute video about the friendship between her late husband and Biden for the Democratic National Convention and then endorsed the Democratic ticket late last month.

When living, John McCain was at odds with Trump, who insulted him for being a prisoner of war, saying McCain wasn’t a hero.

Harris, taking the stage first, gushed that McCain – who she served with in the U.S. Senate – was an ‘incredible, incredible American.’

‘He was a patriot of the highest order and Cindy is supporting our campaign,’ Harris said. ‘And she’s doing it because she knows that Joe and I will always do what she and John did, and that’s put our “Country First,”‘ the California senator added, referencing John McCain’s 2008 presidential campaign slogan.

When it was Biden’s turn, he spoke glowingly of Harris’ Wednesday night debate performance.

‘I don’t know if you caught it but the senator had a heck of a night last night,’ Biden said. ‘You gotta give me great credit for knowing how to pick ’em right,’ he said laughing.

Earlier, both Harris and Biden were asked about Trump calling Harris a ‘monster’ during his morning Fox Business Network call-in interview with Maria Bartiromo.

‘I don’t comment on his childish remarks,’ Harris told reporters.

He called Harris ‘one of the finest persons I’ve ever dealt with’ and said she was ready on ‘day one’ to be president of the United States.

Biden said he didn’t like Pence’s answer on a peaceful transfer of power, no more than what Trump had previously said.

‘It was hard to take my eye off the fly, but watching the debate I found – I shouldn’t be so sarcastic – but what I found was, I found that I don’t know whether he was afraid to take a position that he knew he shouldn’t take because it would be contrary to the president’s or whether he really believes it too,’ Biden said.

Pence answered, ‘I think we’re going to win this election.’

‘But when you talk about accepting the outcome of the election, I must tell you, Senator, your party has spent the last three and a half years trying to overturn the results of the last election. It’s amazing,’ he said aiming his comment at Harris.

Pence never said what he would do if Trump refused to leave the White House.

In Biden’s remarks Thursday, the ex-veep told the crowd that Trump and Pence are ‘setting up the argument that these votes aren’t going to matter’ – meaning mail-in ballots.

He then pivoted to the news out of Michigan – that militia members planned to kidnap the state’s Democratic Gov. Gretchen Whitmer, who’s been at odds with Trump over COVID-19 lockdown orders.

‘Remember those guys with the assault rifles standing in her driveway?’ Biden asked. ‘And the president saying things in my debate with him like, to the Proud Boys, an all-white supremacist group, stand down but stand ready?’

‘This is serious stuff, we can’t just win by a vote – we’ve got to all turn out,’ Biden said.

Cyclops baby albino shark shocks fishermen after they find it inside...