The head of the National Broadband Network says the project is ‘on track’ despite losing more than $2billion in six months.

A performance summary for the six months to December 31 revealed NBN Co recorded a total revenue of $1.81billion, which is an increase of 39 per cent on the previous result.

There were more than 907,000 residential and business premises activated during the last six months of 2019, bringing the total number of activated properties to 6.44million.

A net loss after tax of $2.8billion was also recorded but NBN Co’s half-year report says the amount is ‘is in line with expectations and reflects the current stage of business maturity’.

NBN Co chief executive Stephen Rue said the ‘outstanding results’ mean they are well positioned to complete the rollout of the network by June 30. 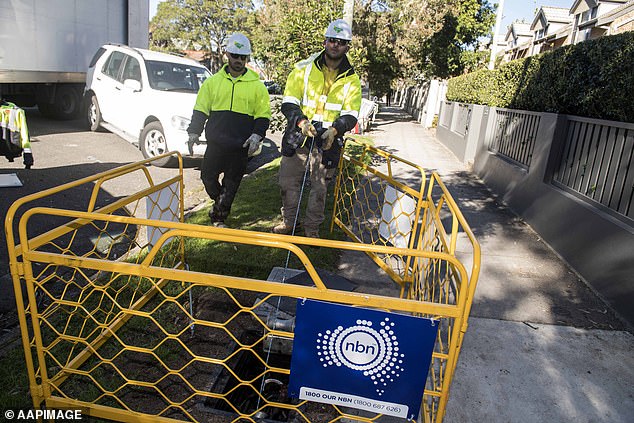 ‘The progress of the rollout during the half was particularly pleasing, given we are now at the most challenging stage of the build, which takes in more complex sites,’ he said.

‘We expect the urban rollout activity to further accelerate in the second half, particularly across our Fibre to the Curb (FTTC) deployment.

‘We are very pleased to say that the nbn is now available in most areas of Australia, and customers continue to sign up to nbn services at a rapid rate.

‘This strong momentum in the rollout puts us well on track to deliver on our commitment of making 11.5 million residential and business premises Ready to Connect and seven million premises connected to the network by 30 June 2020.’ 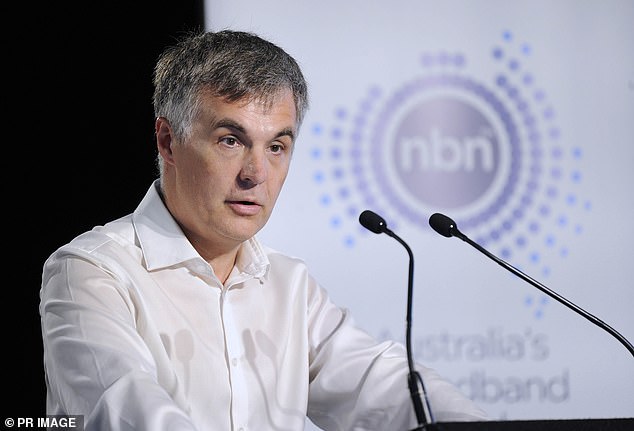 If the National Broadband Network had gone to plan, 98 per cent of Australian households would have had optical fibres connected to their homes by 2018.

The idea for a NBN was hatched 13 years ago when Labor was in Opposition, with the cost blowing out from $15billion to $51billion as of 2018.

Stephen Conroy, who held the communications portfolio, released a policy promise in March 2007.

The former Victorian senator vowed 98 per cent of Australians would be connected to high-speed broadband internet with speeds that were ’40 times faster’ than existing copper wire connections.

In Opposition, Labor promised minimum download speeds of 12 megabits per second with a more modest fibre-to-the node rollout that would be ‘so fast that household entertainment, business communication and family services will happen in real time’.

In government Labor had promised an even more ambitious NBN, with a faster fibre-to-the-premises model, would be finished by June 2018.

In their second term, Labor in 2011 became slightly less ambitious, reducing the goal to 93 per cent of Australian homes, with a delayed deadline of December 2020.

The NBN vision was also subjected to political creative differences.

After Labor prime minister Kevin Rudd lost the September 2013 election, Tony Abbott’s incoming Coalition scaled back the NBN project to speed up the rollout and reduce the cost.

The new communications minister Malcolm Turnbull replaced Labor’s plan for a fibre to the home and instead replaced it with fibre to the node, or the exchange on the street.

Its plan was for speeds of 25 to 50 megabits per second.

Cats’ VFX staff had to work 90-hour weeks and sleep at their desks to finish movie, source says

Cats’ VFX staff had to work 90-hour weeks and sleep at...