British teenager, 19, films himself climbing a 470ft-tall skyscraper in Barcelona barefoot while waving to shocked onlookers below

By Ryan Fahey For Mailonline

A British teenager has filmed himself climbing a 470ft skyscraper in Barcelona barefoot and waving to shocked crowds below.

Adam Lockwood, 19, is no stranger to vertigo-inducing free climbing, having successfully scaled buildings of up to 650ft in the UK and elsewhere in Europe for the last two years, without any equipment.

Earlier this week, for the first time, Adam took on a skyscraper building – the 472ft Torre Agbar tower in Barcelona, Spain. 19-year-old Adam Lockwood is pictured at the top of the 470ft Torre Agbar tower in Barcelona, Spain earlier this week 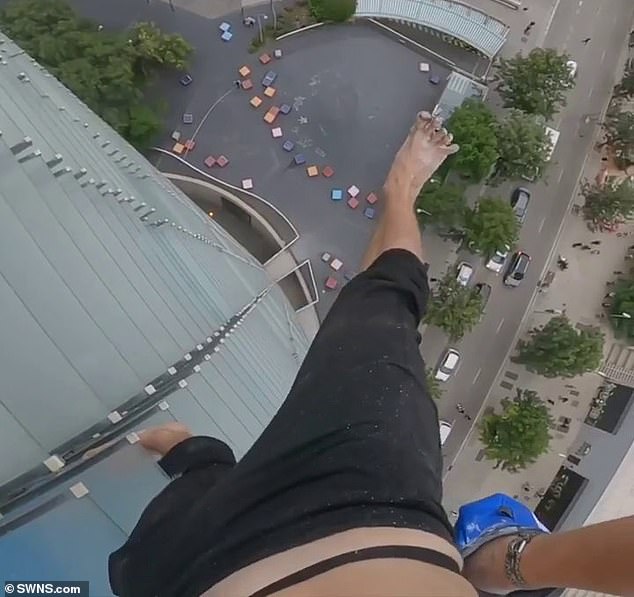 Lockwood taking the opportunity to wave at stunned crowds with his foot in Barcelona, Spain earlier this week 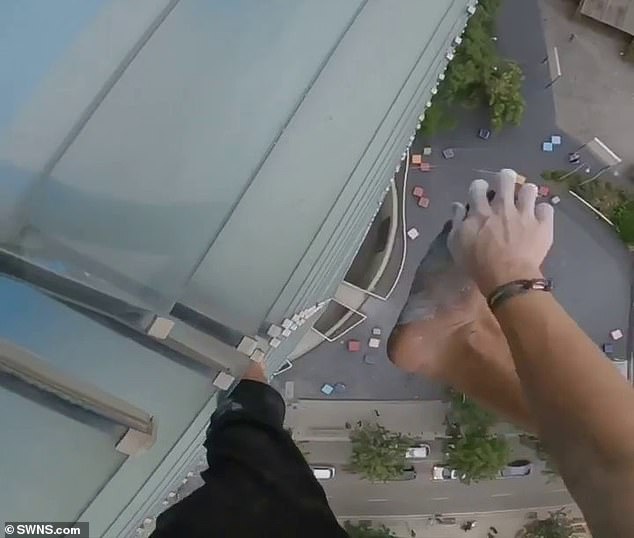 Lockwood had to stop multiple times to dust his feet with chalk for grip as he made his ascent in Barcelona, Spain earlier this week

The teen, from Manchester, had to keep stopping to rub chalk on his feet to help his grip, as he climbed the ladder-like structure on the outside of the office block.

Lockwood took the opportunity to wave at awestruck crowds below with his bare foot each time he paused.

And he can be heard chuckling to himself on camera as he came across a couple of office workers still sat at their desk – who were startled when they saw him waving through their window.

Adam said: ‘It was a really nice climb. It was a good feeling when I got to the top, I felt quite satisfied. 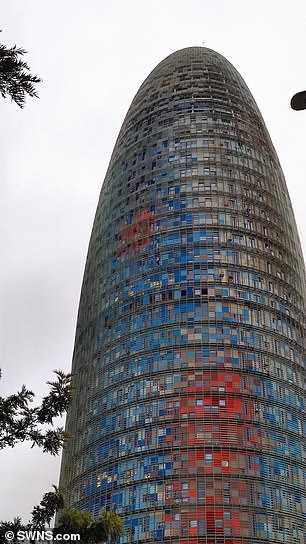 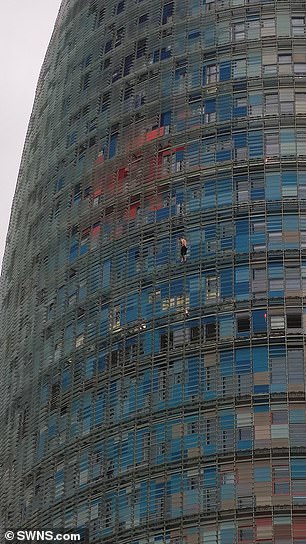 ‘I did it in just 28 minutes, which I think is a record for climbing that building – so I was chuffed with that.

‘It was a bit slippy going up – I had to keep stopping to chalk my feet.

‘I’ve never done a building barefoot before – I’ve done a few cranes, but this was new for me. It adds a new element to it, it’s a bit like taking the climb to the next level.’

And despite having to adjust to not having as much grip with his feet, Adam said he wasn’t put off taking on the climb.

He said: ‘If I was ever scared about doing something, I just wouldn’t do it..’

Adam completed the climb on Wednesday evening at 6pm – after most people in the building had finished for the day.

He added: ‘I only saw two people still sat at their desks. They jumped up when they saw me – it was quite funny.’

And Adam has one more climb to complete over this weekend in Spain – which he will also be doing barefoot.

Fantasy fallout – How to sort out Steelers receivers? Who steps...

Pubs and restaurants in many areas of Scotland can serve alcohol...