When Arsenal’s deadline day present Thomas Partey arrived at the club for the first time this week, social media was awash with huge excitement among the fanbase.

In recent times at the Emirates, only the arrivals of Mesut Ozil, Alexis Sanchez and Pierre-Emerick Aubameyang have been met with as much anticipation as Partey’s last-gasp move.

After years of chasing the Ghanaian midfielder, Arsenal finally got their man after meeting Atletico Madrid’s release clause of £45million. 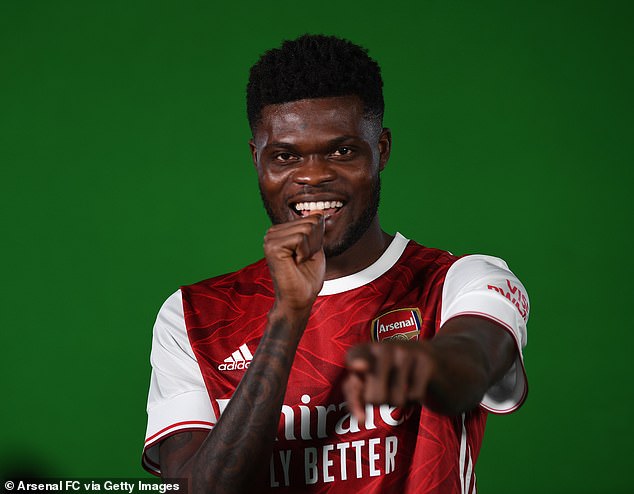 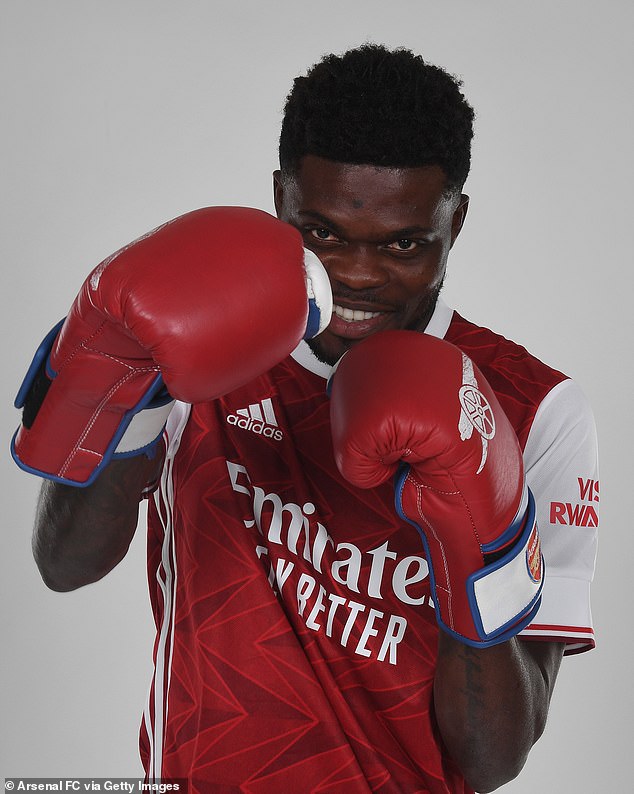 The transfer has been viewed by many as the missing piece in Mikel Arteta’s jigsaw, the man needed to help Arsenal challenge for the Champions League places after four seasons away from the top table.

And former Arsenal scout Francis Cagigao has reiterated that stance, but has gone one step further.

‘I first watched him about six years ago playing for Almeria on loan from Atletico Madrid and he was more box-to-box, attacking even’, Cagigao told Sportsmail.

‘I think we will see him with the shackles off because he did very much play in a constricted midfield unit [at Atletico].

‘He could be the final piece of the jigsaw that makes Arsenal challenge for the title.’

And Arteta, who finally has a player at his disposal that can allow him to tweak his formation in various ways, also realised just how important a coup this was. Speaking on Thursday ahead of his potential debut against Manchester City in the Premier League, the Arsenal boss admitted: ‘I’ve seen the buzz around the place I think the fans are really happy. 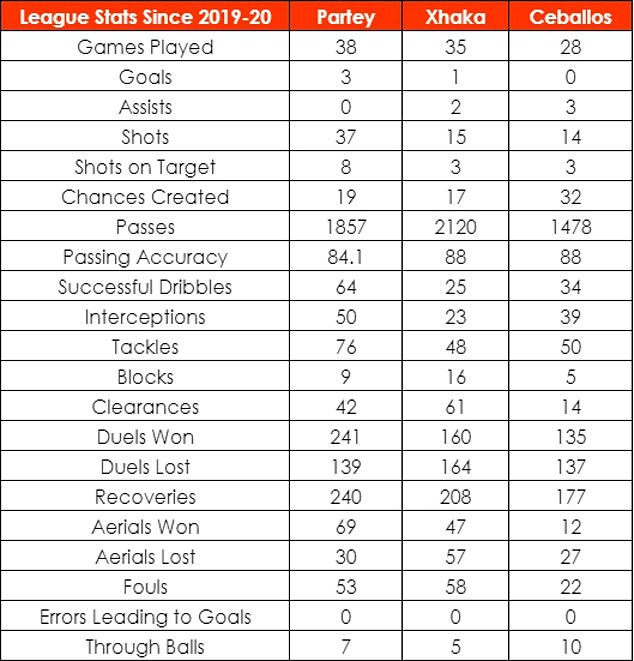 ‘I’ve seen some really positive reactions after we bought him, the same with the team, the squad and the staff.

‘He is a player we had the radar on for a long time and we have managed to bring him in and it’s going to be a really important addition to the team.’

Arsenal fans were so excited by his arrival they even started a trend on Twitter called ‘#NoThomasNoPartey’, and they will be hoping he can be the man who can guide them to a party come the end of the season.

In recent campaigns, if you watch Arsenal closely, their midfield has become way too laboured – a far-cry from the silky football played under legendary manager Arsene Wenger.

While both Granit Xhaka and Dani Ceballos have impressed under Arteta since his arrival in December last year – especially the former after his career at the Emirates appeared all but over after his bust-up with the fans – there has been something deeply missing in the heart of midfield.

The midfield is far too one-paced for Arteta’s liking and he knew he needed change with Arsenal struggling to create much for their deadly attacking threat. 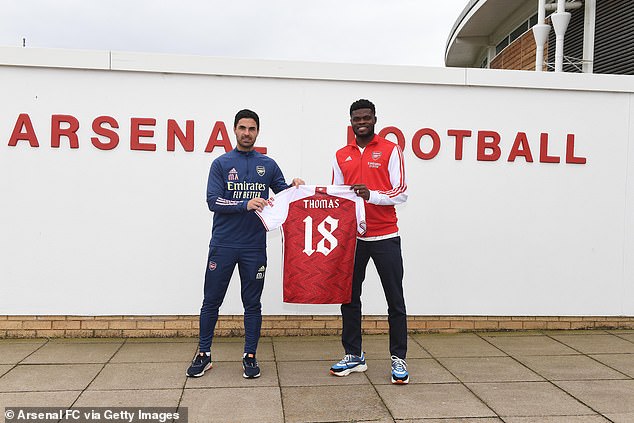 There was no bite or incisiveness but Partey was brought in to change that view and add that ruthless streak to the midfield.

And his stats compared to the usual Gunners midfield cast prove that point emphatically.

While the perception of Partey is that he will provide a robust shield in front of the defence, his all-round play will serve as a breath of fresh air for Arsenal supporters.

His box-to-box nature means he is just as effective going forward as he is defensively, and since the beginning of last season in league football, he has offloaded 37 shots in 38 matches compared to Xhaka’s 15 and Ceballos’ 14.

Partey has also scored more goals, albeit only with three, than his new team-mates during that time.

Partey’s chances created figures are down but that’s not why Arsenal were so heavily invested in bringing him to the club. The 27-year-old will offer that immediate escape route from the back, turning defence into attack in an instant.

His combative nature shines through in his stats, achieving 64 successful dribbles compared to the 25 of Xhaka and 34 of Ceballos. 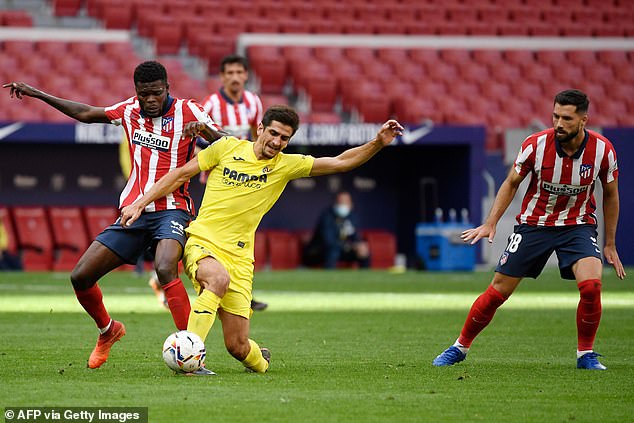 Meanwhile on the interception front, Partey has produced 50 while Xhaka and Ceballos have only made 23 and 39 respectively.

The Ghanaian star also leads the way on the tackle front, making a huge 76 – while the Arsenal duo’s stats are well down.

Partey’s strength in the 50/50 battle and aerial duels should also greatly benefit Arsenal while his never-say-die attitude has allowed him to make many more recoveries than his new midfield team-mates.

He has joined Arsenal in his peak years and the club knew tying down his signature was significant moving forward.

The ex-Atletico star will allow Arsenal to play with more freedom and give Xhaka and Ceballos the chance to flourish in their own ways, enabling the former to dictate the tempo of the game while the latter can roam further forward and provide that creativity up top.

Most importantly, Partey’s arrival will offer that balance Arsenal have needed for quite some time. For a while, the midfield have struggled to link up the attack but the Ghanaian star’s box office approach should free up Pierre-Emerick Aubameyang and Co to do what they do best.

It’s a tough awakening starting your career in England against Pep Guardiola’s City side, but don’t get it wrong, Partey’s signing is a big move forward for Arsenal. 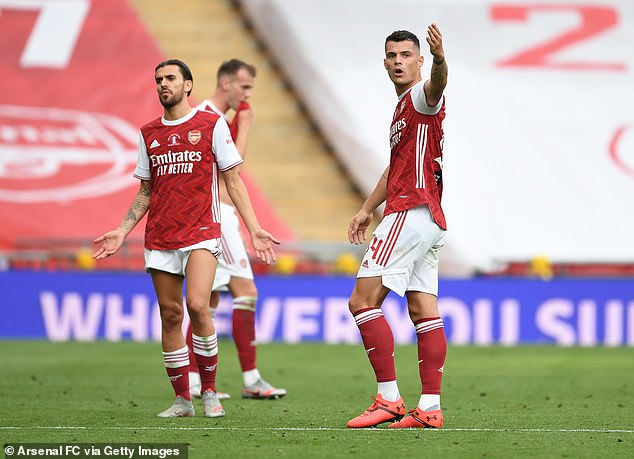 How Google’s searches have changed in the last decade

Coronavirus has cost more than 2.5 million years of potential human life in the US

How Google’s searches have changed in the last decade

Coronavirus has cost more than 2.5 million years of potential human...