Prince Charles and the Duchess of Cornwall appear to remain in self-isolation from each other in Scotland following the future king testing positive for coronavirus.

Last night the couple shared a video of them clapping our NHS heroes from separate areas of Birkhall House in the Balmoral estate.

Camilla, 72, was seen applauding from a window while Charles, 71, appeared in a hallway by the front door. 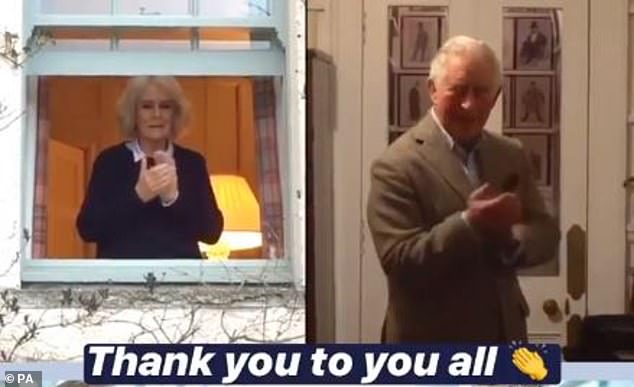 Camilla, 72, was seen applauding the NHS from a window last night while Charles, 71, appeared in a hallway by the front door

Lisa Ackerley, trustee and chair at Royal Society for Public Health, told FEMAIL: ‘If anyone in the household has symptoms of the coronavirus or has been diagnosed, it makes sense for them to be isolated as much as possible from the rest of the household.

‘For others in the household who are vulnerable, for example if they have underlying health conditions or are over 70, then advice is that they should try to arrange to stay away for 14 days.

‘So it is absolutely right that Camilla should be self-isolating from Charles to protect herself.’ 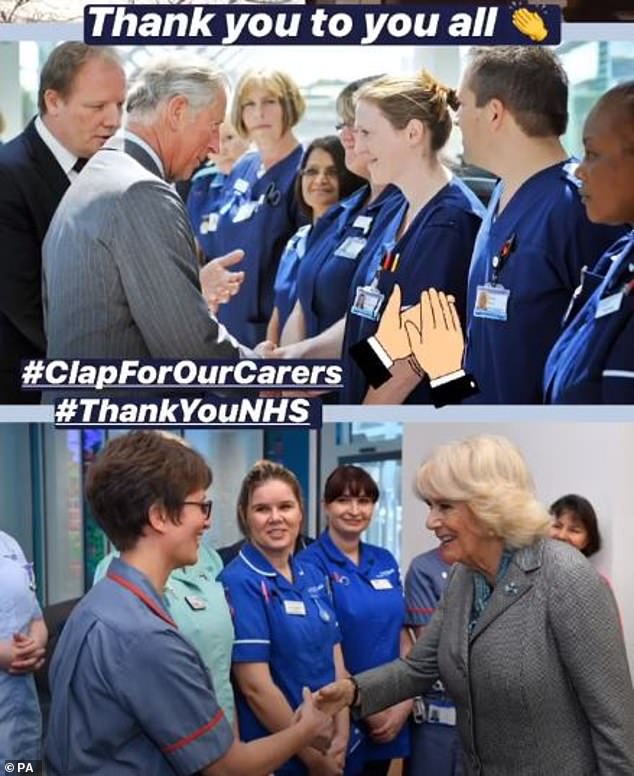 The Prince of Wales has a ‘mild’ form of the illness, while the Duchess of Cornwall has tested negative and is without any symptoms of the virus, which has killed 578 and infected 11,658 more in the UK so far.

Yesterday Charles thanked well-wishers for hundreds of ‘get well soon’ messages after he contracted coronavirus, with Clarence House saying he was ‘enormously touched’ by all the kind words he had received.

Charles’s doctor believes the royal may have been contagious from March 13 at the earliest – just 24 hours after he last saw his 93-year-old mother the Queen, who is in self-isolation at Windsor Castle with Prince Philip, 98. 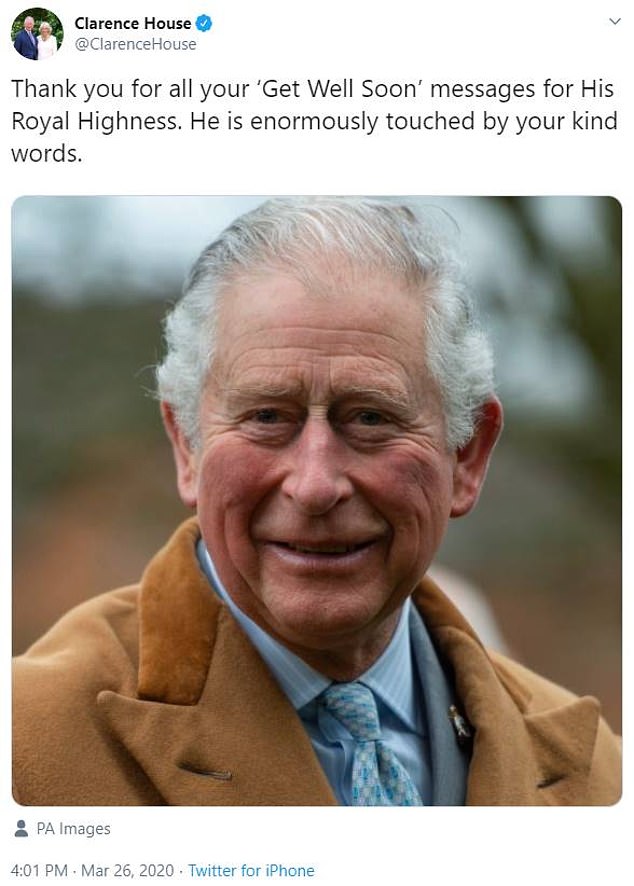 Yesterday Charles thanked well-wishers for hundreds of ‘get well soon’ messages after he contracted coronavirus, with Clarence House saying he was ‘enormously touched’ by all the kind words he had received

His team have been informing anyone who met or came close to him while he was contagious – and those people are expected to go into self-isolation if they haven’t already, according to the Telegraph.

Clarence House refused to comment on the Prince of Wales’s health after Dr Calderwood appeared to hint Charles and Camilla might have underlying medical conditions that made a coronavirus test necessary.

A source said it was still ‘business as usual’ for Charles, adding: ‘The general plan is the prince will continue maintaining a diary of work but it will be done through telephone calls and digital conferencing.

‘He is likely to focus on core areas – his Sustainable Markets Council work for the environment, his Prince’s Foundation and Prince’s Trust work.’

Meanwhile Camilla is battling self-isolation by chatting to friends and family via the social networking app called Houseparty. 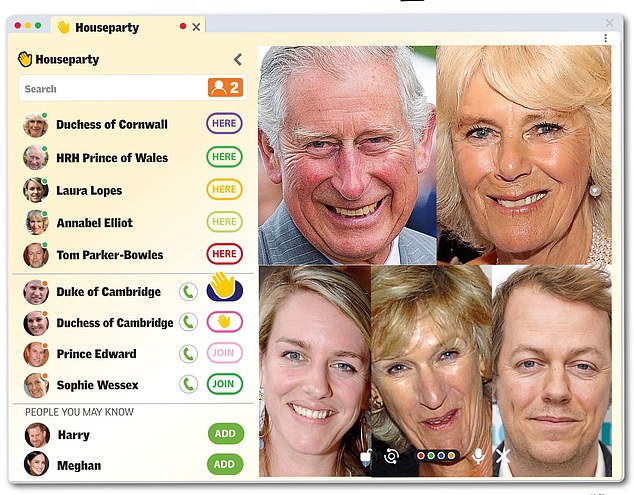 Meanwhile Camilla is battling self-isolation by chatting to friends and family via the social networking app called Houseparty. Pictured: a mocked-up version of what Camilla’s Houseparty app could look like

The Daily Mail revealed today that the duchess is an avid user of the video chat program that lets up to eight users enjoy a simultaneous catch-up.

While it was fairly popular with millennials before the Covid-19 pandemic, last week alone Houseparty was downloaded more than two million times worldwide as people are forced inside.

Everyone from celebrities to middleclass mums – and now, it seems, royalty – have started enjoying virtual hangouts, prosecco nights and even dinner parties with friends, which you can ‘host’ without having to worry about the dishes afterwards.

It is understood Camilla, who this week tested negative for the virus, is desperately missing her children, Tom Parker Bowles and Laura Lopes, who themselves have five children between them.

Camilla – or Gaga, as they call her – is very much a hands-on grandma. So she was persuaded to download the Houseparty app on her phone – and hasn’t looked back.

‘It’s amazing, I just press a button and all my family pop up!’ she told a friend. She also regularly ‘hangs out’ with her interior designer sister, Annabel Elliot, 71.

Camilla is a huge supporter of charities dealing with loneliness and isolation such as Silverline, a confidential help service for older people, and the Royal Voluntary Service – and thinks Houseparty and other apps are fantastic tools for keeping in touch.

A royal source said: ‘The duchess has found this a brilliant way of staying in touch with her own family whom she is missing terribly. From her charity work she knows how important it is for everyone to do this while we all deal with this pandemic.’