Hospital admissions for Covid-19 have surged by 50 per cent in a week in England, Government data show.

A total of 491 people were put on wards because of severe coronavirus on Wednesday this week, up from 328 on the same day last week.

During that time the average number of daily admissions has surged from 285 to 441, showing that hospitalisations are picking up now that the number of cases is hitting high levels.

The North is being hit disproportionately hard and accounted for 60 per cent of hospitalisations on that day, which is the most recent data available.

With the Midlands included, areas outside of the South account for around three quarters of admissions, again drawing a line through the North-South divide.

It comes as documents leaked by public health officials in areas including Blackburn and Manchester show council bosses fear their hospitals will be faced with numbers of coronavirus patients on par with, or higher than, what they experienced in April.

Hospitals could be saturated by the end of this month, officials fear, and it may now be too late for lockdown rules to prevent it. 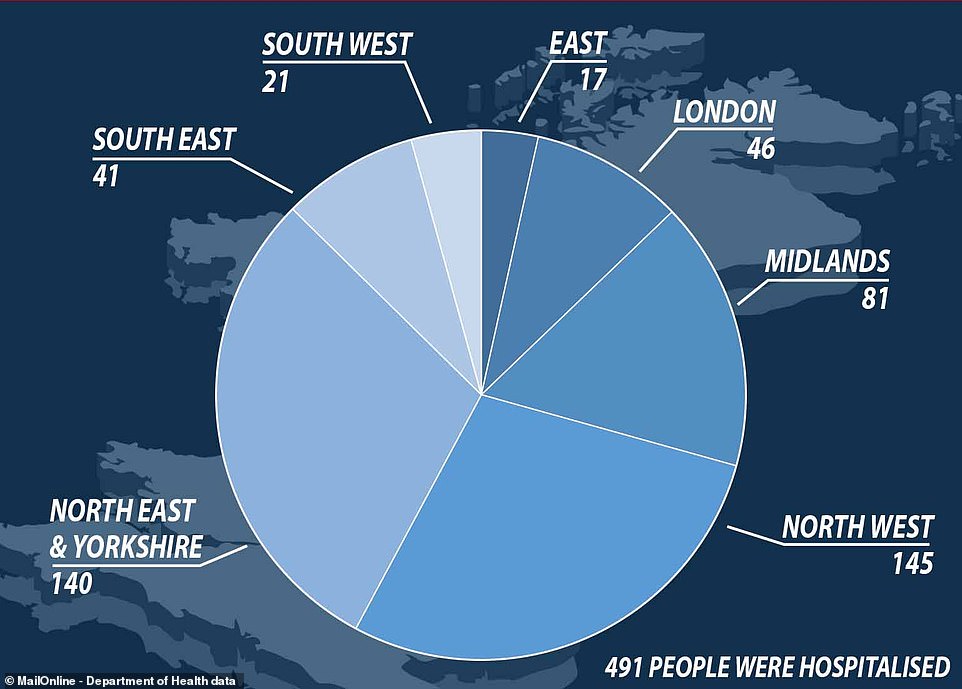 Most of the 491 people admitted to hospital with coronavirus in England on Wednesday were in hospitals in the North West and North East and Yorkshire. Including the Midlands, areas outside of the South accounted for three quarters of all the seriously ill patients 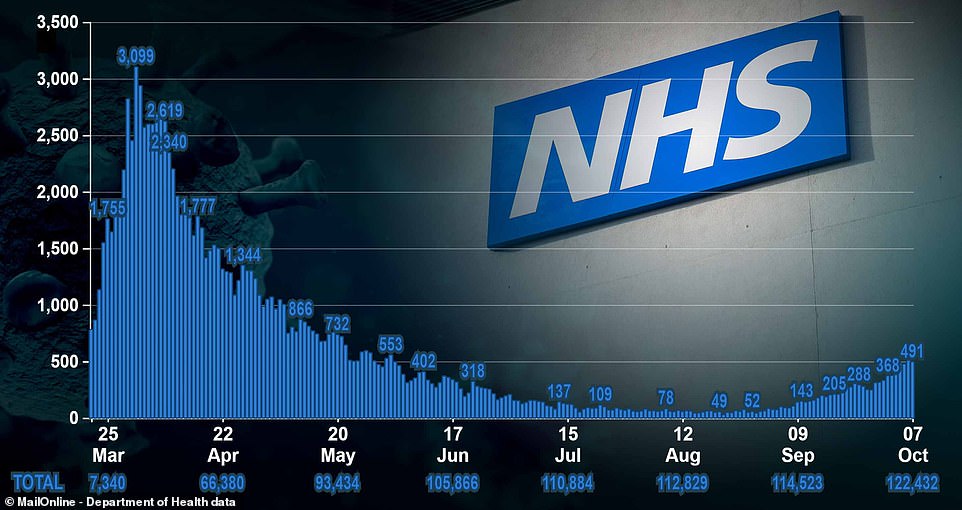 Department of Health data show a definite trend of coronavirus hospital admissions rising in England, with the 491 confirmed on Wednesday a 50 per cent rise on the 328 a week earlier

The 491 admissions confirmed for Wednesday were a slight fall from 524 a day earlier but mark a continued overall rise in recent weeks.

Almost three-quarters of all admissions are now occurring in the North West, North East, Yorkshire and the Midlands.

On Wednesday 286 of the 491 hospitalisations in the North East, North West and Yorkshire alone (58 per cent).

And another 81 were in the Midlands, along with 17 in the East of England.

Grouping the North and Midlands together shows that 75 per cent of all hospitalisations were in those regions, meaning only one in four came from the South of the country.

In the South East, South West and London, there were 168 people hospitalised with the virus on the same day (34 per cent of the total).

NHS hospitals in Blackpool are treating up to 65 per cent as many patients as they were at the peak of the outbreak in April, statistics show.

In Newcastle and Liverpool, admission rates are nudging closer to numbers not seen for six months as the second wave of Covid-19 rips through the North of England.

Cases of the disease have been rising markedly since mid-August and, as it works its way deeper into society and reaches older age groups, greater numbers of people are being admitted to hospital. Figures suggest one in four people who test positive in the UK end up in hospital.

At Blackpool Teaching Hospitals, 17 infected patients were admitted on September 28, 61 per cent of the peak level of 28 seen on May 23. 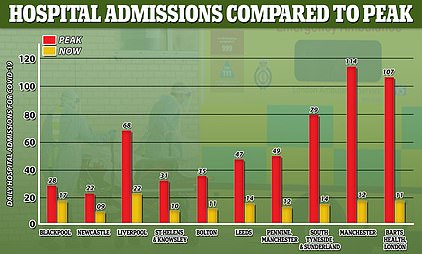 Out of hospital trusts with more than five admissions per day in the last week of September, Blackpool’s Teaching Hospitals NHS trust is nudging closest to levels seen during the peak of the outbreak with 17 people admitted on September 28 compared to 28 on May 23. (The graph compares the highest number of daily admissions in the last week of September with the highest number during the peak of the epidemic in March, April or May for each area)

The data comes from a monthly NHS report and admissions have continued to rise in the first week of October but their locations are not yet publicly available.

A vast majority of NHS trusts – 153 out of 206 – admitted an average of one or no patients per day during that period, showing that a small number of hospitals are making up almost all of the rise in patients.

It comes as leaked public health documents have warned parts of the North West could see admissions surge past their worst levels before the end of this month if more action isn’t taken.

Local officials say it is ‘extremely likely’ that the number of inpatients will rise above 3,000 in October – higher than the maximum 2,890 in April and possibly double to 6,000, according to a report seen by the Health Service Journal.

Public health staff said it may even be too late to stop this happening because so many people are already infected.

The trend fits with the one emerging in the counts of new cases, with the majority of positive tests now coming from the North of the country.

All local lockdowns are concentrated in the North and Midlands, while infection rates are thought to be up to 10 times higher than they are in the least affected regions.

A report by the Office for National Statistics today showed that, in the week up to October 1, around one per cent of people in the North East were carrying the virus – one in every 100 people – compared to 0.1 per cent in the South East – one in every 1,000.

The divide means that the North is expected to be hit with tough social distancing rules from next week when the Prime Minister is set to launch his ‘three tier’ lockdown system.

Those put into the top tier could see hospitality businesses such as pubs, restaurants and cafes closed in a bid to slow the spread of the infection.

Public health officials in the North of England fear the numbers of people getting admitted to hospital with Covid-19 could hit levels not seen since April before the end of this month.

NHS hospitals in Blackpool are already treating up to 65 per cent as many patients as they were at the peak of the outbreak in April, NHS statistics show.

At Blackpool Teaching Hospitals, 17 infected patients were admitted on September 28, 61 per cent of the peak level of 28 seen on May 23.

The data comes from a monthly NHS report and admissions have continued to rise in the first week of October but their locations are not yet publicly available.

Out of the 10 worst-affected hospital trusts that are seeing admissions rise to more than 10 per cent of peak levels, nine are in the North.

As well as Blackpool, Newcastle and Liverpool they include trusts in St Helens & Knowsley in Merseyside, Bolton, Leeds, Greater Manchester and Manchester city, and South Tyneside and Sunderland.

Local officials say it is ‘extremely likely’ that the number of inpatients will rise above 3,000 in October – higher than the maximum 2,890 in April and possibly double to 6,000, according to a report seen by the Health Service Journal.

A briefing from the council in Blackburn with Darwen in Lancashire, seen by the HSJ, said it is ‘extremely likely’ that hospital admissions will be worse than ever if tougher action isn’t taken.

The document, sent to public health staff around Greater Manchester and Lancashire said: ‘It is reasonable to assume no impact can be made in the increasing trend in bed occupancy for at least the next two weeks, as these cases have already occurred.

‘Even if a full scale lockdown was called tomorrow bed occupancy would continue to rise after the next two weeks as hospital beds fill quicker than they empty for COVID patients.

‘During the first peak in April hospital bed occupancy reached its maximum point in the North West at 2,890 on 13 April.

‘It is extremely likely that this will happen in 17 to 22 days. If nothing changes in terms of downward pressure on R [reproduction rate] in the next 10 days, hospital bed occupancy will start to approach 6,000 in 30 to 35 days.

‘This is double the number of beds occupied at the peak in the North West in April.’

Three men fleeced the National Lottery out of £10,000, court hears

Three men fleeced the National Lottery out of £10,000, court hears