Could UK coronavirus deaths be lower than feared? If Britain follows China’s trajectory, only 5,700 not 20,000 are expected to die and the peak will be a week on Sunday, experts say

By Joe Middleton For Mailonline

New research shows that if Britain follows the same trajectory as China then 5,700 people, not 20,000, are expected to die – and the peak with be a week on Sunday.

A new paper by Tom Pike, from Imperial College London, compares deaths for confirmed Covid-19 cases in China with eight other countries – all of which have implemented some form of social distancing measures.

The estimates for the UK – if it follows the same trajectory as China – shows the UK could have 5,700 deaths, and the peak would be 260 fatalities on April 5. 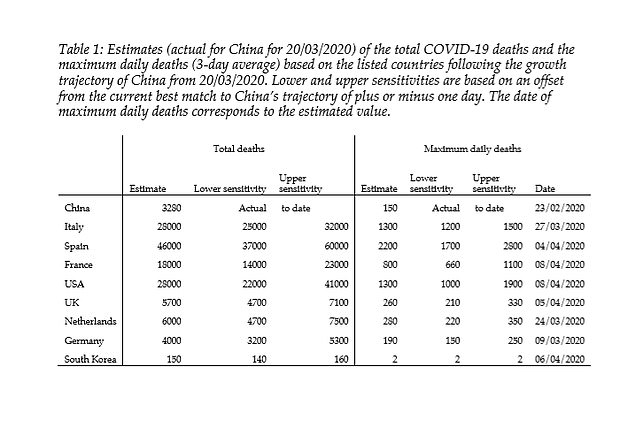 The estimates for the UK – if it follows the same trajectory as China – shows the UK could have 5,700 deaths, and the peak would be 260 fatalities on April 5

Just last week Sir Patrick Vallance, the Government’s chief scientific adviser, said that keeping the number of coronavirus deaths in the UK at ‘20,000 and below’ would be a ‘good outcome’ but still ‘horrible’.

The estimates in the paper also show that Italy would have 28,000 deaths and Spain would have 46,000 fatalities – the highest in Europe.

The analysis in the paper, co-authored by Vikas Saini, ‘suggests that early adoption of social distancing is more effective than delayed implementation, even of highly restrictive measures.’ 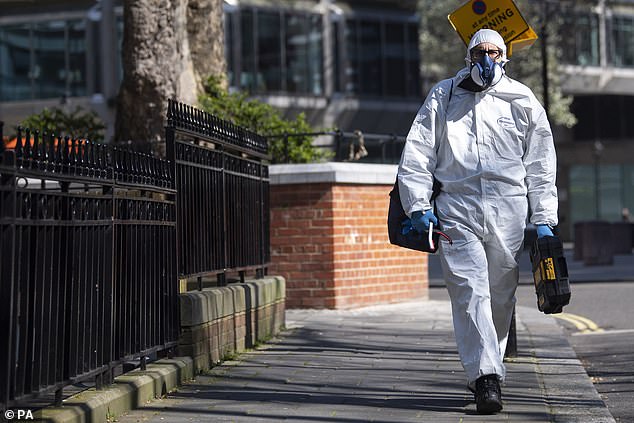 A man wearing a protective face mask and clothing in Westminster, London, on Thursday

It concludes ‘there may be a threshold of public health intervention beyond which a decline in death rates begins to occur.’

The data for the study was taken from the European Centre for Disease Control website on Tuesday March 24.

Answering questions about the new paper on Twitter, Mr Pike says the estimates are purely data driven and ‘there is no epidemiological modelling, or in fact any modelling, in our analysis.’

He also adds the projections in the paper will only be accurate if the UK continues on the same trajectory as China.