The cleaning products contained methanol, a type of alcohol that can be poisonous if it is absorbed through the skin or ingested.

Health officials say exposure to methanol-based hand sanitizer can cause side effects such as nausea, vomiting, blurred vision, permanent blindness, seizures, coma, permanent damage to the nervous system or even death. 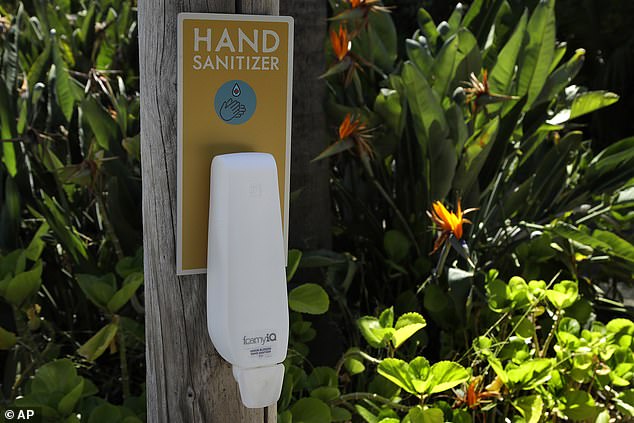 Alcohol-based hand sanitizers typically contain ethanol or isopropanol, which are disinfectants effective at killing microbes, bacteria, and other microorganisms.

The US Food and Drug Administration (FDA), which regulates hand sanitizer, does not consider methanol an ‘acceptable ingredient.’

‘Methanol is not an acceptable ingredient for hand sanitizers and should not be used due to its toxic effects,’ the FDA said in a letter published in June warning Americans not to use nine hand sanitizers containing methanol.

‘Consumers who have been exposed to hand sanitizer containing methanol should seek immediate treatment, which is critical for potential reversal of toxic effects of methanol poisoning.’

For its report, the CDC and state partners looked at 62 poison center call records from May 1 to June 30, 2020 for cases of alcohol-based hand sanitizer–associated methanol poisoning.

Researchers found 15 such cases in Arizona and New Mexico, all of whom were hospitalized. The average age was 43 and, of the 15 patients, 13 were male.

According to the report, all of the patients had swallowed alcohol-based hand sanitizer products in the past – but details of these histories remain unclear.

Normal blood alcohol levels range between 0 and 50 milligrams per deciliter (mg/dL) but, among the patients, five were below 50mg/dL and the remaining 10 were between 58mg/dL and 548mg/dL.

They also all experienced metabolic acidosis, which occurs when the body produces too much acid, or when the kidneys are not removing enough acid from the body.

Six patients developed seizures during their hospitalization. Three remained hospitalized as of July 8, while eight were discharged.

In one case, a 44-year-old man went to a health care facility after he reported visual impairment.

He then reported drinking an unknown quantity of alcohol-based hand sanitizer a few days before his symptoms occurred.

The man was hospitalized with metabolic acidosis and a blood methanol concentration of 97 mg/dL.

After six days he was discharged, but doctors say he has near-total vision loss. that will be permanent.

‘This investigation highlights the serious adverse health events, including death, that can occur after ingesting alcohol-based hand sanitizer products containing methanol,’ the CDC wrote in its report.

‘Safety messaging to avoid ingestion of any alcohol-based hand sanitizer product should continue.’

Methanol poisonings are not common, but they do occur. In 2013, more than 1,700 cases occurred in the US.

In January 2016, two Tennessee high school students died after ingesting a mixture of Mountain Dew and methanol, believed to have come from racing fuel.

Additionally, in April 2018, a Massachusetts man died after consuming alcohol that was contaminated with methanol.