By Maxine Shen For Dailymail.com

Pennsylvania police dashboard camera footage showed the shocking moment when an alleged drunk driver drove over the hood of a police cruiser while trying to escape arrest.

Pennsylvania’s Erie Police Department said on Facebook that at about 3.36am that day, officers spotted a gold-colored car traveling in the wrong lane, heading towards oncoming traffic. 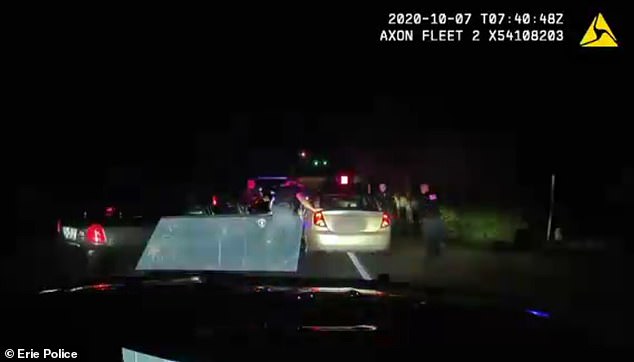 Erie Police Department officers boxed in an alleged drunk driver early Wednesday. The driver refused to get out of the car (pictured) and accelerated towards two officers 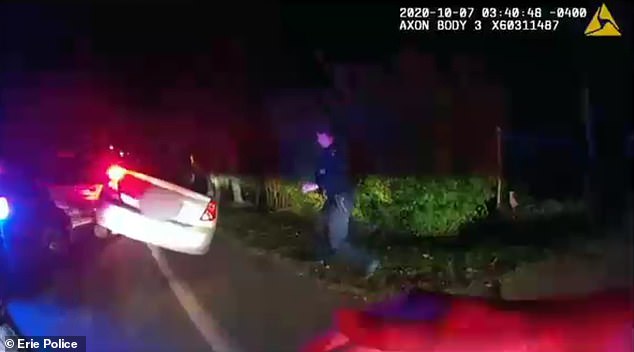 The driver’s car is seen here as it tilts on its wheels, squeezing past one of the cruisers and scraping against the guard rail it was trapped by 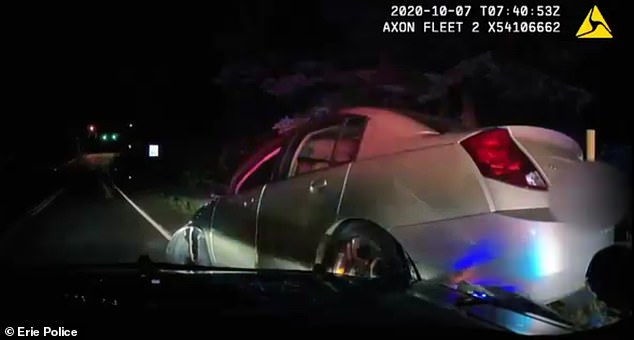 Authorities said that officers then attempted to carry out a traffic stop, but that the driver – later identified as Schubert – refused to stop his car.

Multiple officers then chased Schubert’s car, eventually managing to stop him by boxing his car in against the guard rail with their police cruisers.

Body and dashcam videos released by police showed at least five officers surrounding Schubert’s car as they tried to get him to exit his vehicle.

Police said that Schubert ‘resisted and refused to exit the vehicle.’

Video then shows the moment when Schubert hit the gas and drove towards the officers in front of him, nearly hitting two of them, police said, ‘ultimately driving over the hood of the vehicle and a guard rail.’

In dashcam footage, the sound of scraping metal and screeching tires can be heard as Schubert’s car jams itself through a small hole between the police car and guard rail.

The police car’s video jostles as Schubert’s car – at a tilt – crawls into view, runs over the cruiser’s hood and then drives off.

Authorities said the officers pursued Schubert, eventually catching up to him and carrying out his arrest.

Fear is entertaining when it provides a short deviation from a...