Public health worker, 36, reports Stansted and Ryanair to police after mask-free security staff let passengers board without covering-up – as airport is hit by wave of Covid complaints

By Katie Weston For Mailonline

A public health worker has reported Stansted and Ryanair to the police after mask-free security staff let passengers board without covering up.

Rebecca McDonald, 36, claimed ground personnel from the airline were allowing people without a face covering to board at the terminal in London.

After raising the issue, staff allegedly accused her of being rude and ‘threatened not to let her board’ the flight to Frankfurt.

The King’s College London researcher also said a worker at security was wearing a ‘loose’ visor and no mask, with people in the duty free area not wearing face coverings while ‘sat on their laptops with no food or drink nearby’.

It comes as the airport is hit by a wave of Covid-19 complaints, over a lack of social distancing and passengers not wearing face masks or not using them properly. 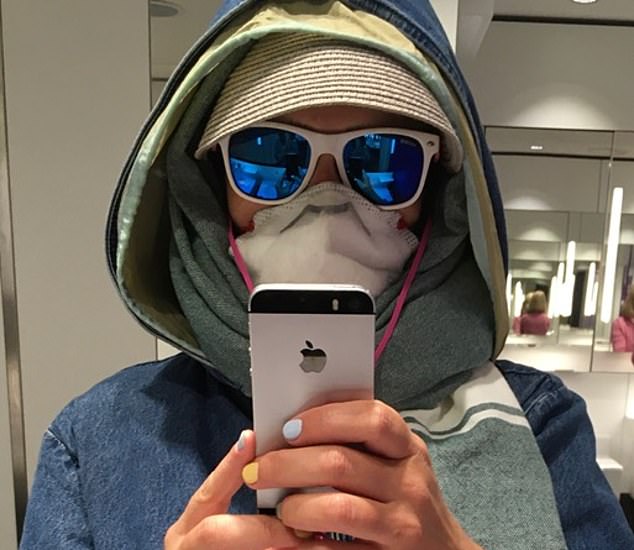 Rebecca McDonald (pictured above), 36, claimed ground personnel from Ryanair were allowing people without a face covering to board at the terminal in London

Ms McDonald told MailOnline: ‘I was quite horrified yesterday morning when walking into Stansted – on multiple occasions I saw people not wearing masks. It started with the security check.

‘One staffer was wearing a visor but it sat quite loosely and only covered half of his face, so I recommended him to wear a mask but he dismissed it and said it was fine.

‘Then walking from Stansted security through the duty free area towards the gate, many more people were not wearing masks.

‘Some were eating to be fair but then there were lots of people just on their laptops without any food or drink nearby not wearing masks and nobody seemed to care.’

Referring to boarding the Ryanair flight, she said: ‘There was no social distancing or indicated markers on the ground and no provisions, nothing in that regard, but also Ryanair staff were not asking people to stand apart.

‘People lining up for boarding weren’t wearing masks or they were hanging loosely under their chin, barely covering their mouths and certainly not their nose. 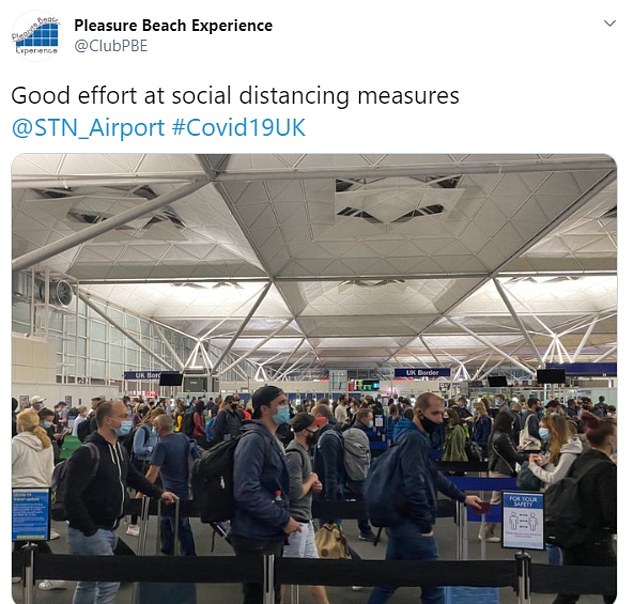 Twitter users have complained to Stansted airport, with one passenger posting a photo, above, captioning: ‘Good effort at social distancing measures’ 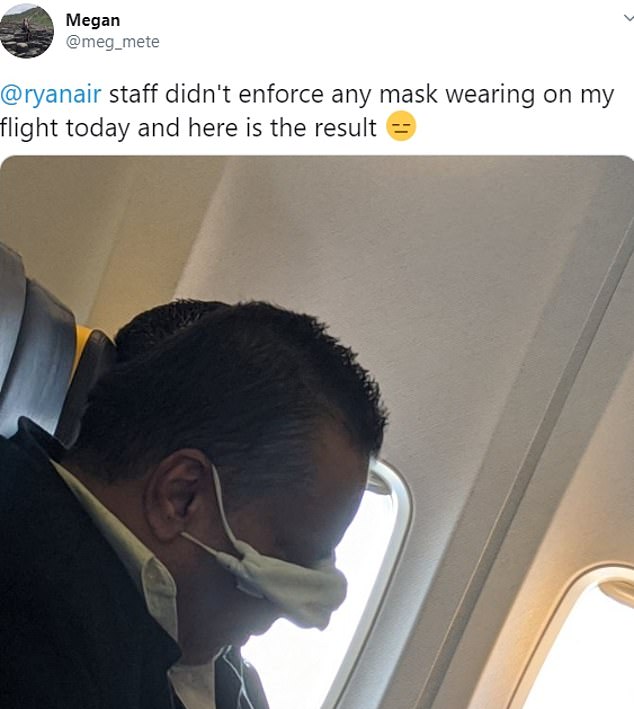 A Ryanair customer shared the above photo to Twitter, posting: ‘Ryanair staff don’t enforce any mask wearing on my flight today and here is the result’

‘There were two staffers who were in charge of boarding and one male staffer who was handling priority, then a female staffer on the non-priority lane.

‘She was in charge of handling my ticket and when it was my turn for boarding I said “I hope you don’t mind but I am concerned about people not wearing masks while boarding here.” My understanding is wearing a mask is a pre-condition of boarding a plane and I work in public health so I feel it’s my job to tell people this.

‘She dismissed this and started telling me my bag was too big and I had to pay for it, so I said yes that’s fine but this is not about the bag.

‘At that point her colleague intervened and said I was being rude, and threatened me from being able to board altogether. I told them I was just reporting what the guidelines are and then they let me board.’

A tweet from the public health worker to Stansted airport, adding that one staffer ‘only wore a loose-fitting visor’ and, after raising issue with the visor, was told to ‘mind her own business’

‘Ground personnel were allowing people without mask to board. I urged staff to remind people to wear mask. Staff claimed I was rude, threatened not to let me board.’

A spokesperson for Ryanair said: ‘In line with Ryanair’s new health measures, no passengers were allowed on board this flight from London Stansted-Frankfurt (5 Oct) without a facemask.

‘To ensure passengers comply with the mandatory use of facemasks cabin crew make a number of reminders -through the public address system- throughout our flights.

‘By failing to comply with Ryanair’s new health measures, customers can be denied boarding.’

Stansted airport told Rebecca that they will ‘look into’ the incident at security, and also pointed out that some people are exempt from wearing a face covering.