An 11-year-old boy was finally reunited with his grandmother after walking 1,700 miles to see her from Sicily.

Romeo Cox finally embraced his grandmother Rosemary, 77, last month after embarking on a three-month journey from Palermo to London on June 20.

The young boy, who was joined on his journey by his father Phil, 46, trekked through Italy, Switzerland and France and fought off feral dogs in order to reunite with his grandmother who he had not seen in more than a year. 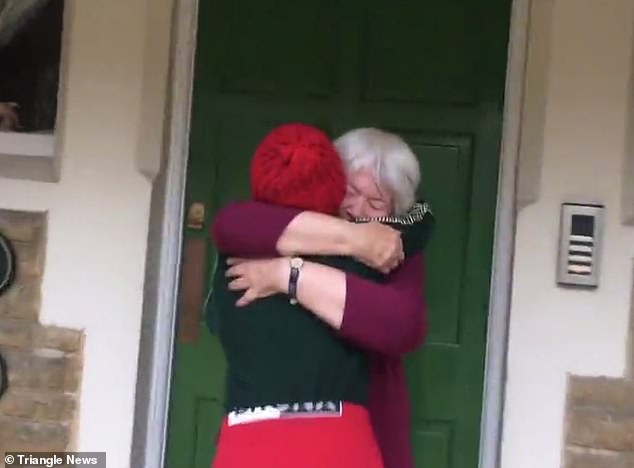 Romeo Cox, 11, finally embraces his grandmother Rosemary, 77, after more than a year away from her 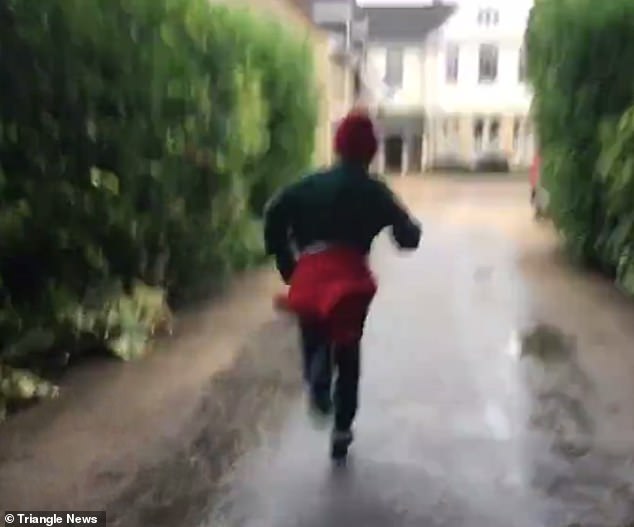 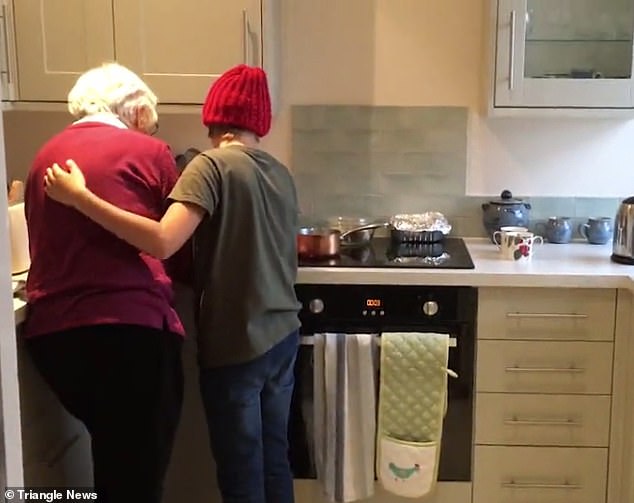 The pair were finally able to spend time together after Romeo walked 1,700 miles to see his grandmother from Sicily

Footage shows the schoolboy crossing a residential street before breaking into a run and embracing his grandmother.

Once inside the house, Rosemary tells her grandson: ‘I’m really proud of you. It’s fantastic what you’ve done it really is. Well done! I’m going to give you a special squeeze, well done.’

After thanking his grandmother for waiting for him, Rosemary tells her grandson: ‘Ah the waiting bit was tough. It was hard.’

Describing the moment he was finally able to see his grandmother Romeo said: ‘Getting closer to Granny’s house, I just started running and left my dad behind. We had the best hug ever – really the best.

‘Granny then made eggs and toast and we talked and talked. I have really missed her, I couldn’t sleep much the night before.

‘Our journey has been so far and so many people have helped my dad and I.’

Rosemary described how she was left overwhelmed by her daring grandson’s journey and gave him ‘the biggest hug ever’.

She said: ‘I didn’t believe my grandson’s incredible journey at first. But seeing Romeo after all this time, after following his journey just feels so special. I gave him the biggest hug ever.

‘Children can inspire us and lift us all up. On behalf of all the grannies in all the world, I want to thank Romeo – as well and hug him and kiss him lots.’

Romeo, whose father is English and mother Giovanna is Italian, moved from Hackney, East London, to Palermo in Sicily last year. 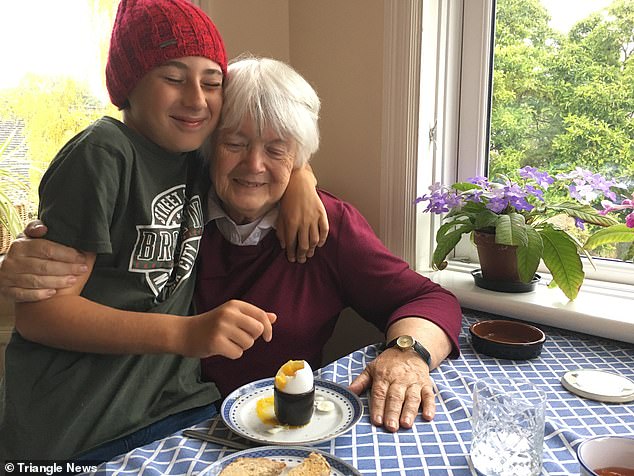 Romeo, whose father is English and mother Giovanna is Italian, said his grandmother made eggs and toast for him 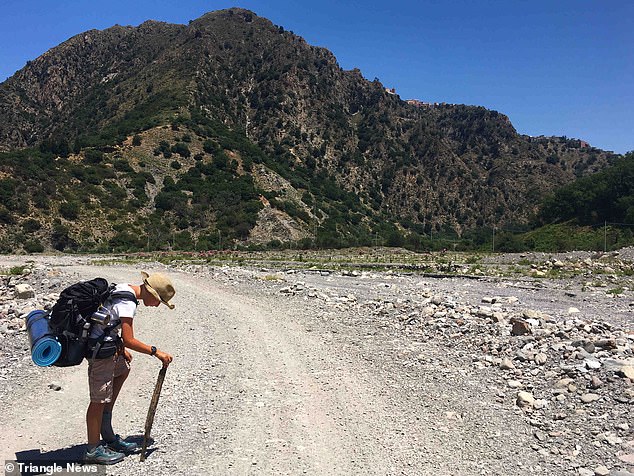 The young boy, who moved from Hackney, East London, to Palermo in Sicily last year, had been unable to see his grandmother due to the coronavirus lockdown 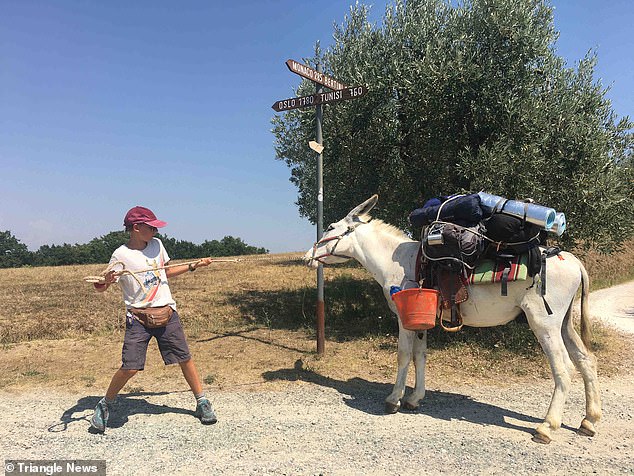 During his trek, which lasted three months,  Romeo came across a wild donkey who he named Pedro 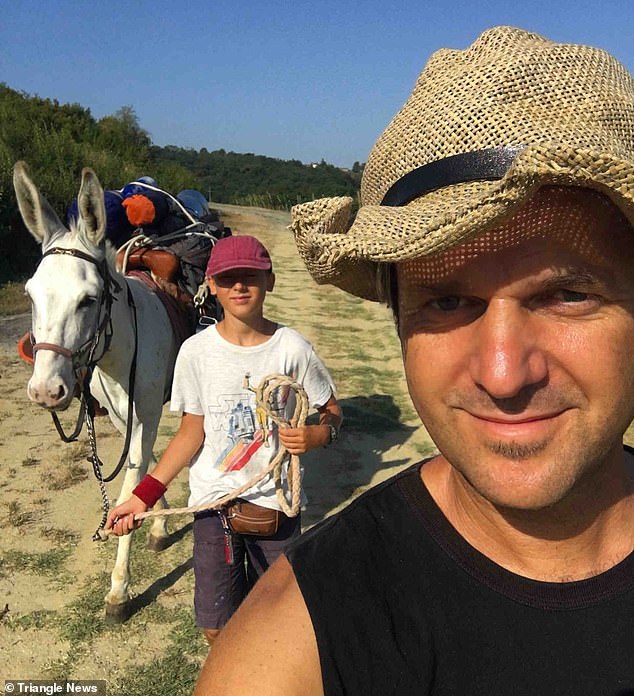 Romeo was joined on his journey by his father Phil, 46, who is a filmmaker and journalist 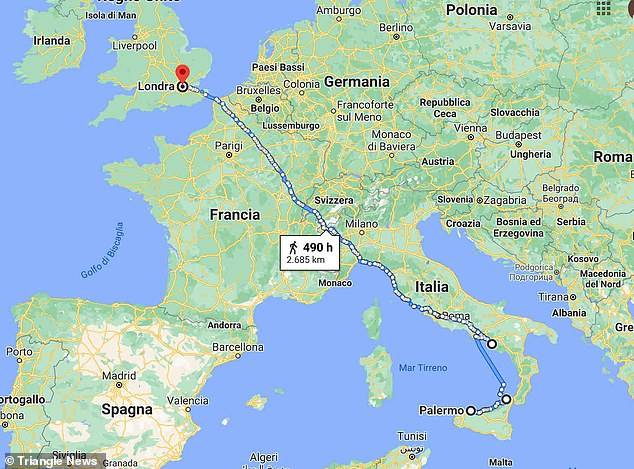 The pair crossed Italy, Switzerland and France and travelled 1,700 miles to see Rosemary

The move meant he was unable to see his grandmother for the whole of lockdown.

With no planes flying back to the UK during the national lockdown, Rome decided to walk to his grandmother instead.

He continued: ‘Even after quarantine, I thought walking might be a new experience.

‘I asked my parents and they said no more than 50 times. Eventually they agreed – provided we planned everything was Covid-safe.’

During their adventure, Romeo and his father slept under the stars with birds and crickets lulling them to sleep, came across a pack of feral dogs and also met a wild donkey who they named Pedro

Rome added: ‘I loved sleeping under the stars and swimming in the sea.

‘We got lost a few times, we slept under a wasp nest which wasn’t a good idea, got bloody feet, but we never thought about giving up.’

Eventually – after 93 days – the pair arrived in Trafalgar Square on September 21 and had to quarantine for two weeks before seeing Rosemary.

During his walk, Romeo raised £13,731  for the charity Refugee Education Across Conflicts Trust. 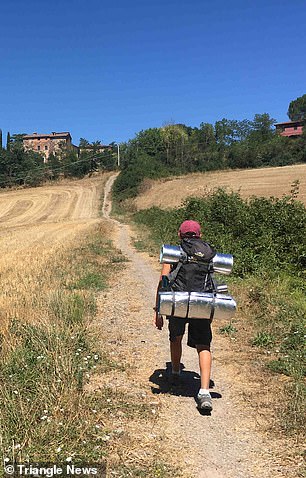 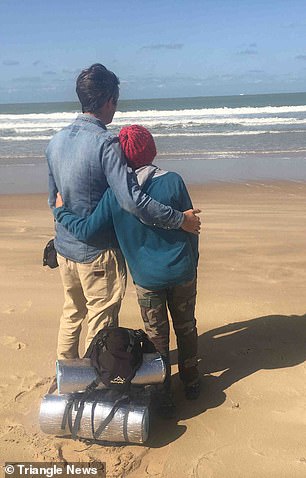 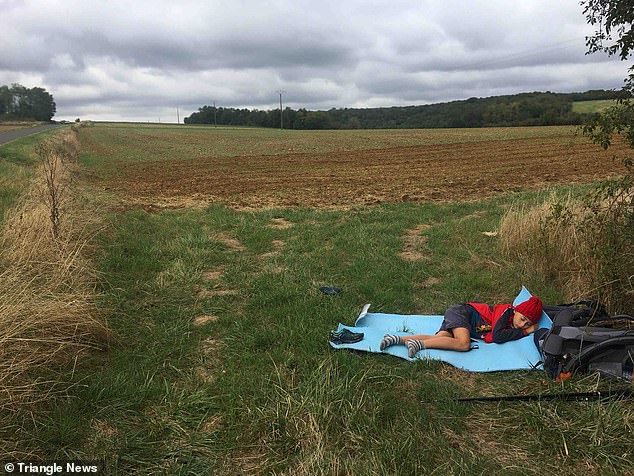 Romeo was inspired to raise money for charity after meeting his friend Randolph, who had migrated to Sicily from Ghana.

The schoolboy added: ‘He walked even further than I have on this trip, but without food and water and in fear. He was risking his life.

‘He helped me when I came to Sicily, and so I wanted to help him and other vulnerable children in return.’

Along their route, Romeo and Phil also volunteered at a refugee camp in Calais, Northern France.

Their journey has now attracted the attention of Lord Dubs – who was one of the Jewish children rescued from the Nazis on the Kindertransport – who has arranged to meet Romeo after the coronavirus pandemic. 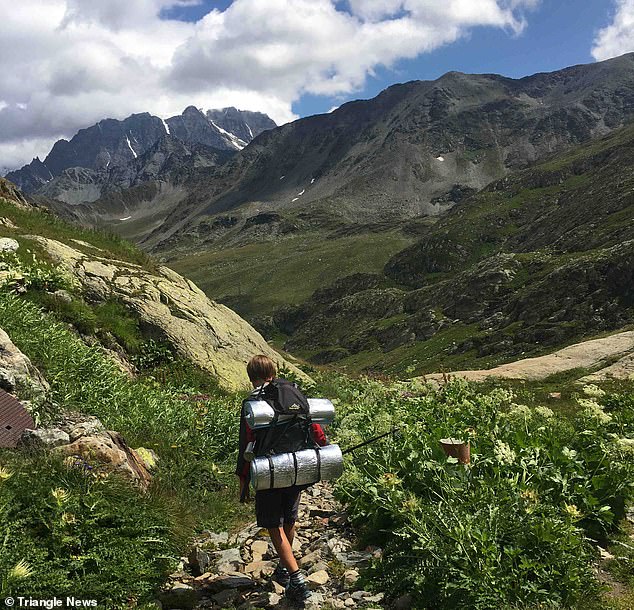 Romeo has since raised more than £13,500 for the charity Refugee Education Across Conflicts Trust

The three-month walk was also an incredible experience for Romeo’s father Phil – a filmmaker and journalist who was captured, held hostage and tortured in Sudan in 2017.

He managed to film his captors by tricking them into using his camera, and hid the memory card during his three-month imprisonment.

Phil said: ‘For me it was really great for my mental health – to participate in a child’s imagination and a child’s epic journey.

‘It was a special time and moment to share with my son and something we both shall never forget for all our lives.’

Despite having to return to Palermo soon, Romeo said his incredible walk was worth it.

He added: ‘I will speak to granny Rosemary from Italy but its not the same as a real hug. I might have to come back soon but will definitely find a better donkey.

‘Dad said no more adventures for at least six months, but I am already planning one.’