A bowler sent himself tumbling towards the stumps before smashing his head into a stage during a clumsy attempt at indoor cricket.

A video shared to Twitter on Monday showed several men playing an improvised game inside a hall in an unknown location in Australia.

The video has been viewed over five million times.

In the footage, the bowler could seen running up from an outside corridor before delivering a ball towards the batsmen.

But the man completely missed his target, with the batsman seen abandoning any attempt to strike the ball as it bounced off to the side.

After putting all his energy behind the delivery, the bowler was unable to stop his momentum and stumbled towards the stumps and the stage.

The batsman could then be seen attempting to help the man, but it was too late and the bowler painfully smashed his head into the stage. 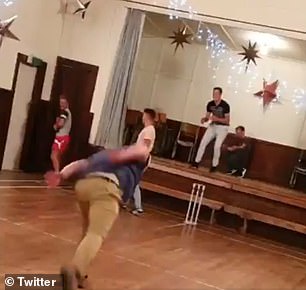 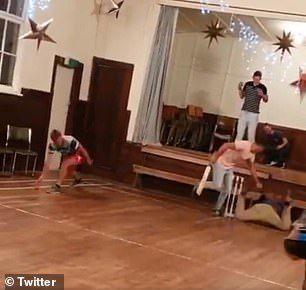 In the footage, the bowler could seen running up from an outside corridor before delivering a ball towards the batsmen

After the video went viral, many suggested the man’s pants were to blame for his tumble.

‘I get the feeling that if he’d had trousers that fitted him he would have been able to save himself,’ one man said.

Others took a shot at the man’s fellow players who did little to save him.

‘You gotta love how no one helped this poor guy out, you all know they saw him struggling, there was a good five to six steps before he wiped out,’ a man said.

Brits ignore isolation orders and head out for DIY gear including...

Real Madrid and Barcelona set to battle for the ‘new Kaka’...

Call to the wild: Great outdoors an escape in tough times