Hyenas get the last laugh: Incredible footage shows wild dogs steal impala meal from leopard… only for pack to be chased off by bigger rivals

By Charlotte Mitchell For Mailonline

A pack of wild dogs think it’s their lucky day when they manage to steal an impala from a leopard that has just caught the beast and is ready to tuck into its meal.

But it is a bunch of hyenas that have the last laugh when they chase the dogs away and claim the carcass for themselves.

The almost five-minute standoff was captured in incredible footage by visitors to Kruger National Park, one of South Africa’s largest game reserves.

It shows the leopard dragging the impala to a secluded spot with a lone wild dog hot on its heels.

The dog circles the animals, yapping as the leopard bends over its prey and attempts to drag the impala further away from the unwelcome lunch guest and perhaps up a nearby tree where it can’t be disturbed.

Eventually, the big cat has had enough and chases the irksome wild dog away before padding back to its prey.

But seconds later, another wild dog appears, then another and another.

The leopard bounds up a the tree to escape the squeaky cries of the dogs as it becomes clear in a shocking moment that the impala is in fact still alive. 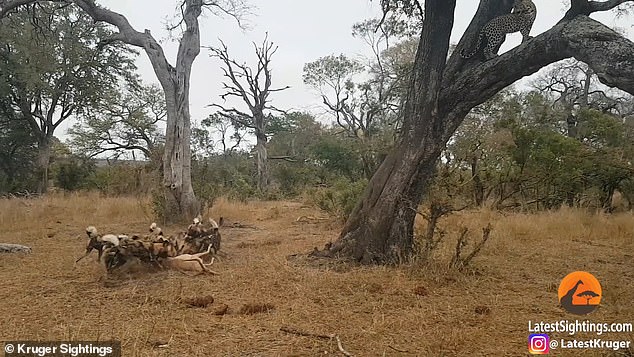 It attempts to break free but a wild dog pounces and grabs its back leg, dragging the animal towards its inescapable fate.

More and more wild dogs seem to appear out of nowhere until suddenly the impala is almost completely covered by the spotted coats of the hounds which tear and tug at the now-dead impala in a feeding frenzy.

The leopard watches forlornly – safe but hungry – from a branch above.

Just then, some of the dogs look up, ears pricked, as if they’ve heard a noise.

Three run towards a bush from where two hyenas burst through, skipping in towards the carcass.

The wailing laughter of the hyenas and the dog’s squeaks fill the air as the scavengers face off. 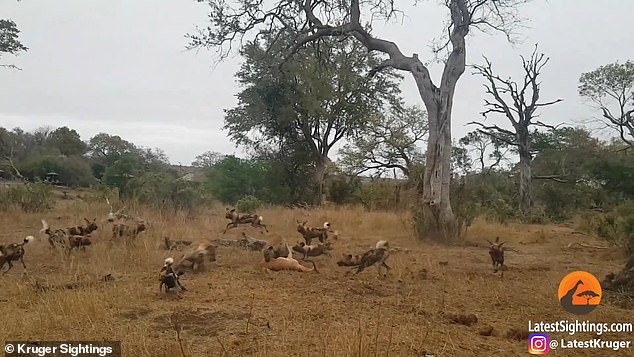 The almost five-minute stand off between the wild dogs and the hyenas who appeared just seconds after the dogs wrested the impala from the leopard, was captured by visitors to Kruger National Park in South Africa 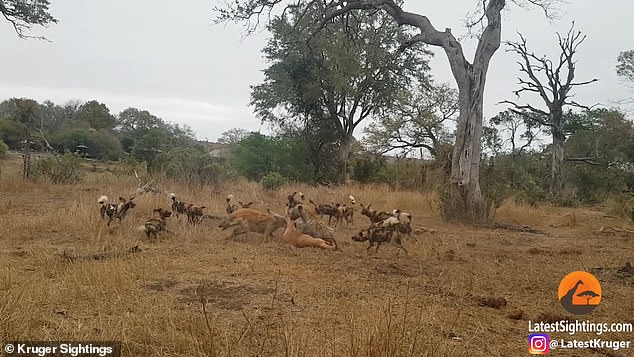 A terrible tussle took place between the two rival packs, both keen to claim the impala carcass as their own 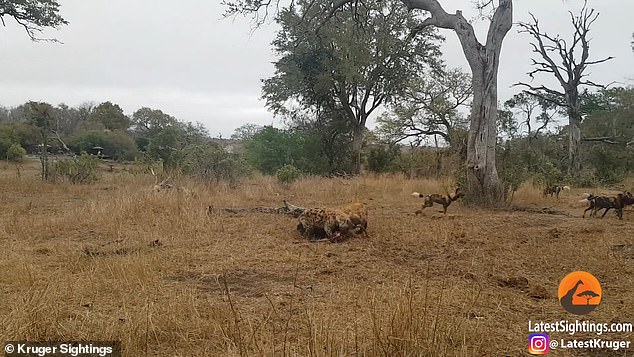 The wild dogs circle the hyenas, taking tentative steps forward, but they are no match for the larger predators, which begin ripping the flesh from the impala.

One hyena breaks from its meal to chase away the pesky dogs but they’re not giving up that easily and some even manage to grab chunks meat off the impala.

Another hyena appears and the trio takes turns eating and pushing back the wild dogs that have still not given up on their stolen snack.

When yet another hyena emerges, it seems as though the dogs have finally given up. 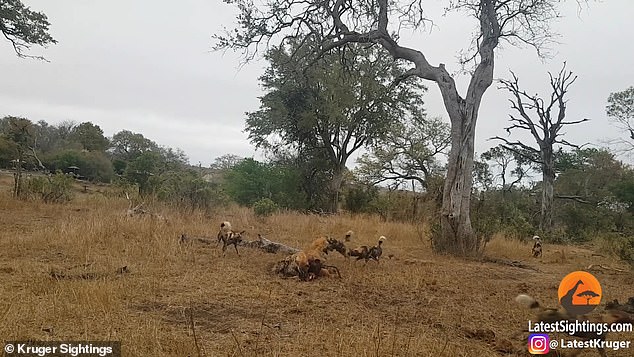 Hyenas, leopards and wild dogs are among the hundreds of animals at Kruger National Park, which is also home to elephants, lions, rhinos and buffalos

But just seconds later they’re back again, nipping at the tails of the feeding, giggling hyenas.

There can’t be much meat left but these dogs are willing to fight for it.

Or so it seems until, finally, the dogs relent and skip off in search of an easier meal.

The national park where the footage was filmed is home to the Big 5: lions, leopards, elephants, rhinos and buffalos, as well as hundreds of other animals.

Despite being the biggest predator on scene the day the video was taken, the lone leopard was no match for the pack mentality of the vicious wild dogs and hyenas.