The street artists of Melbourne have started to restore iconic Hosier Lane to its ghetto glory.

Just days after a gang of fire extinguisher-wielding vandals desecrated the popular laneway, street artists have returned to right the wrongs.

While the latest artwork may not hit the lofty standards the lane is globally renowned for, the renewed section of Hosier heralds back to its glory days, when graffiting its walls was just downright illegal. 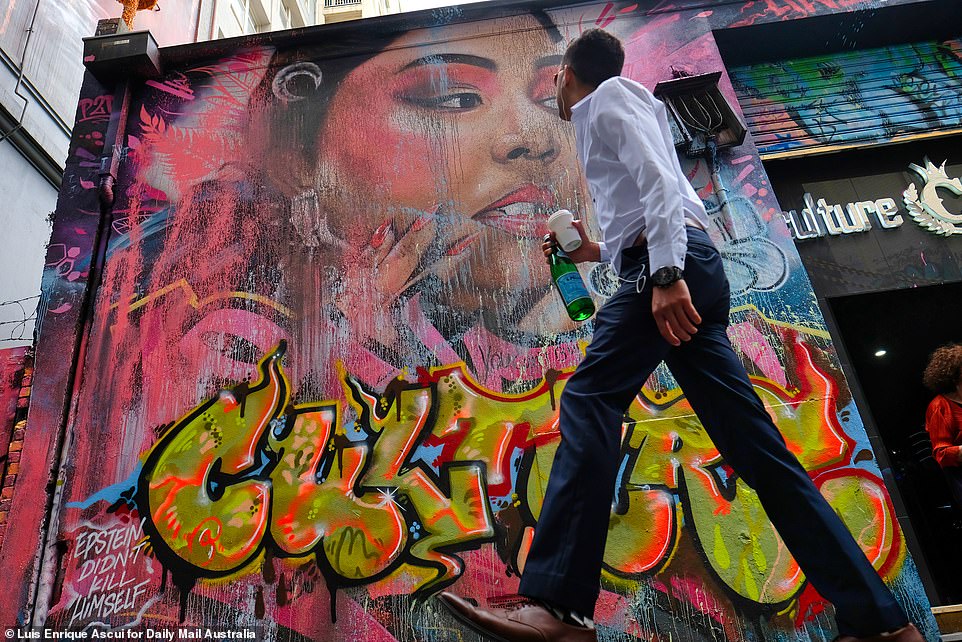 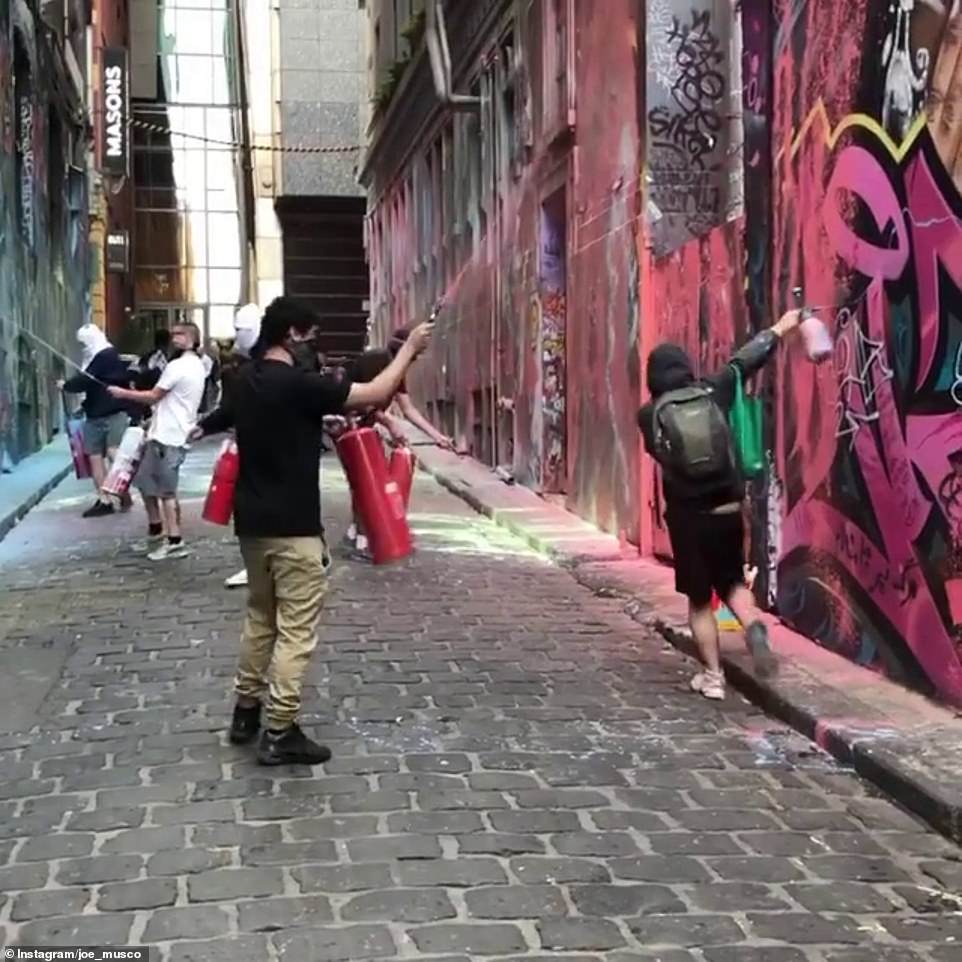 Police continue to hunt Saturday’s vandals, who were caught on camera layering Hosier’s walls with paint.

It remains unclear exactly what prompted the attack, with many in the underworld street art scene believing it was probably a swipe at the laneway’s commercial appeal.

Painting Hosier’s walls is nothing new, but the gang crossed the line when it left a mess all over the bluestone road and footpath, which remains Melbourne city property.

On Tuesday, the tags and artwork had began to cover up Saturday’s mess.

While hardly prized works of art, the current crop is already being lapped up by hordes of tourists who have continued to flock down the lane.

Haters of Hosier Lane’s Culture Kings, which has a doorway leading directly onto the lane, have already targeted it since it was drenched in paint last weekend.

Culture Kings caused outrage among the street art community when it lobbed into the trendy strip in 2018.

It happened when a street artist dared paint over a commissioned mural on the rear of its shop.

The police were called and the artist was arrested.

The shop quickly moved to appease the angry community and said it was all a big mistake.

Much of Saturday’s attack was centred around the trendy clothes shop, which  is positioned at the Flinders Lane-end of the lane. 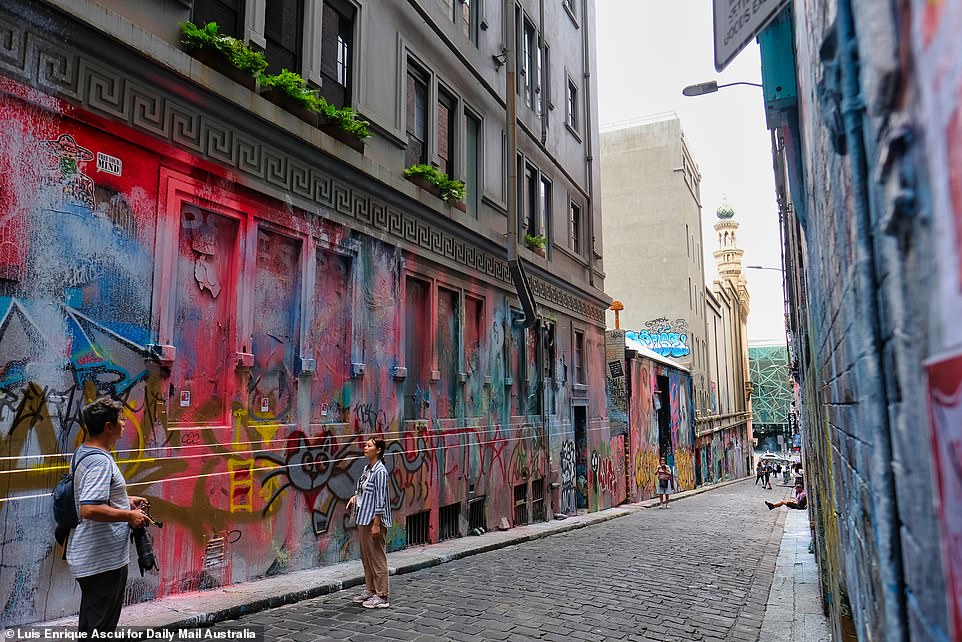 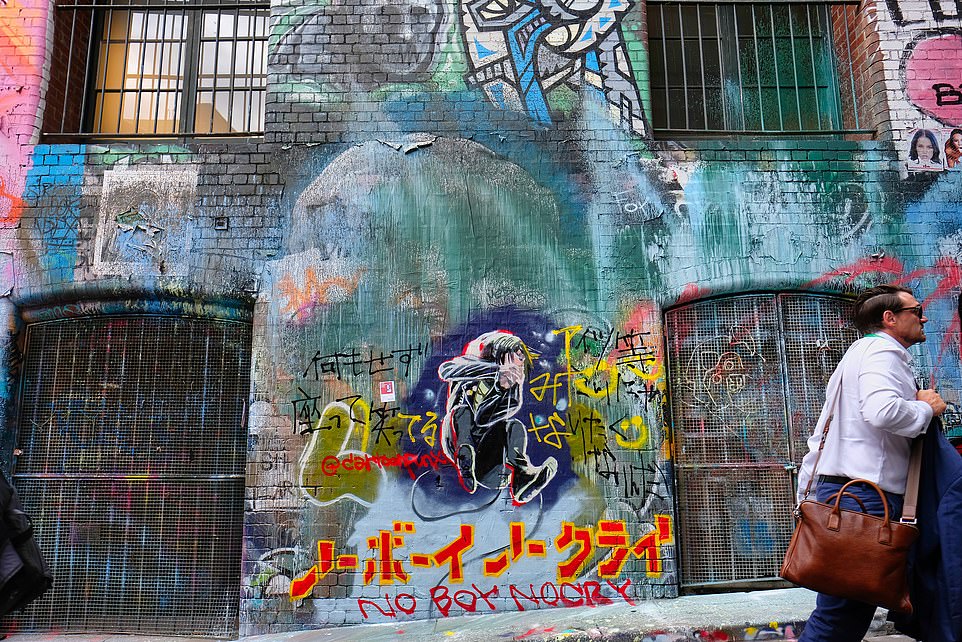 ‘Culture Vulture’ now adorns the walls on either side of the entrance – Comedian Celeste Barber having the word ‘vulture’ splashed across a mural of her face.

It will be a temporary blemish given the nature of the laneway.

People wandering down the lane stopped to pose for selfies out front as tour groups passed by.

Some scoffed that the previous ‘artwork’ had been replaced simply with ‘people’s names’.

Others laughed at the public outcry over the supposed desecration of the laneway. 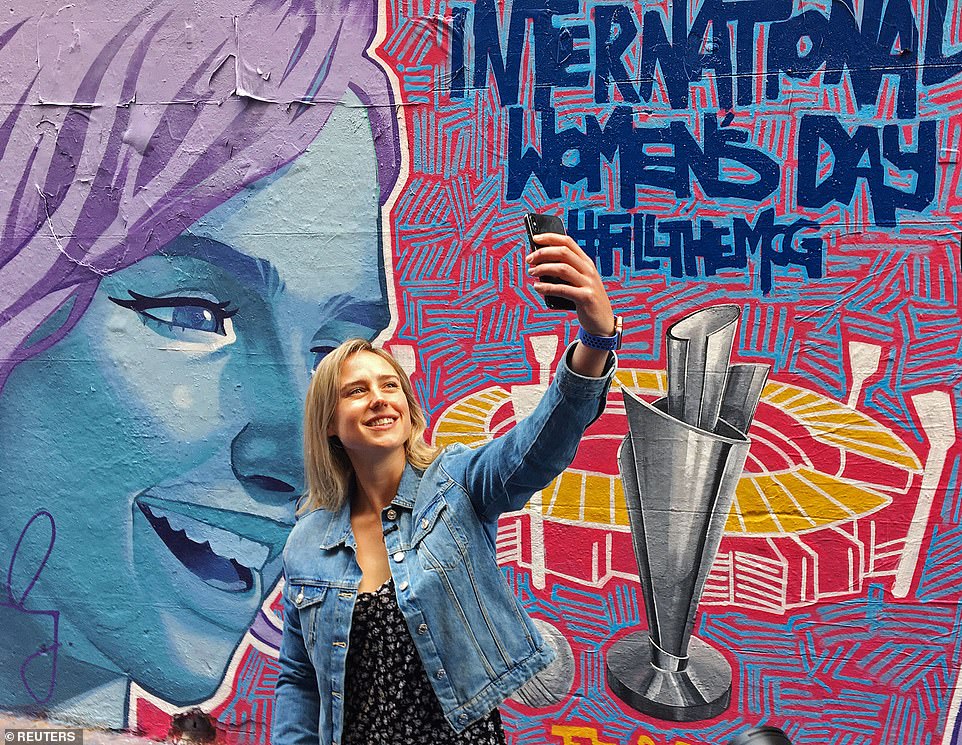 Australia all-rounder Ellyse Perry, the ICC Women’s Cricketer of the Year, posed for a selfie in front of a mural promoting the Women’s T20 World Cup tournament in Hosier Lane just last week 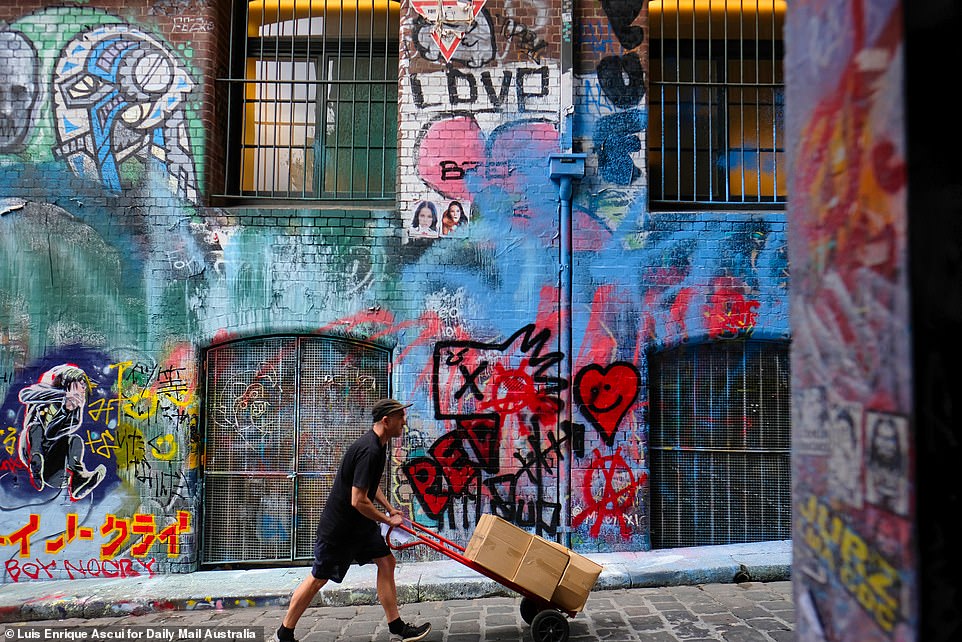 Back in the day before social media and selfie sticks, Hosier Lane was targeted by kids looking for a reputation on the streets.

While it is adored by suburban Melburnians and tourists alike, graffiti artists – whom police label ‘graffiti vandals’ – lost their love affair with the place long ago.

Melbourne street magazine Acclaim Magazine went so far as to  call for it to be torn down.

‘Hosier lane is not real, it’s a toothless tiger, beautiful to look at and without any threat – and it needs to go,’ it stated in an undated article.

‘The current state of Hosier is appalling – quality work doesn’t exist or disappears instantly, while swarms of paid street art tours and an endless sea of tourists and flood the street.’

Thousands of tourists a day are drawn to the little laneway, positioned off Flinders Lane between Russell and Swanston Street in the heart of Melbourne.

Artwork ranges from the politically motivated to the downright ridiculous. 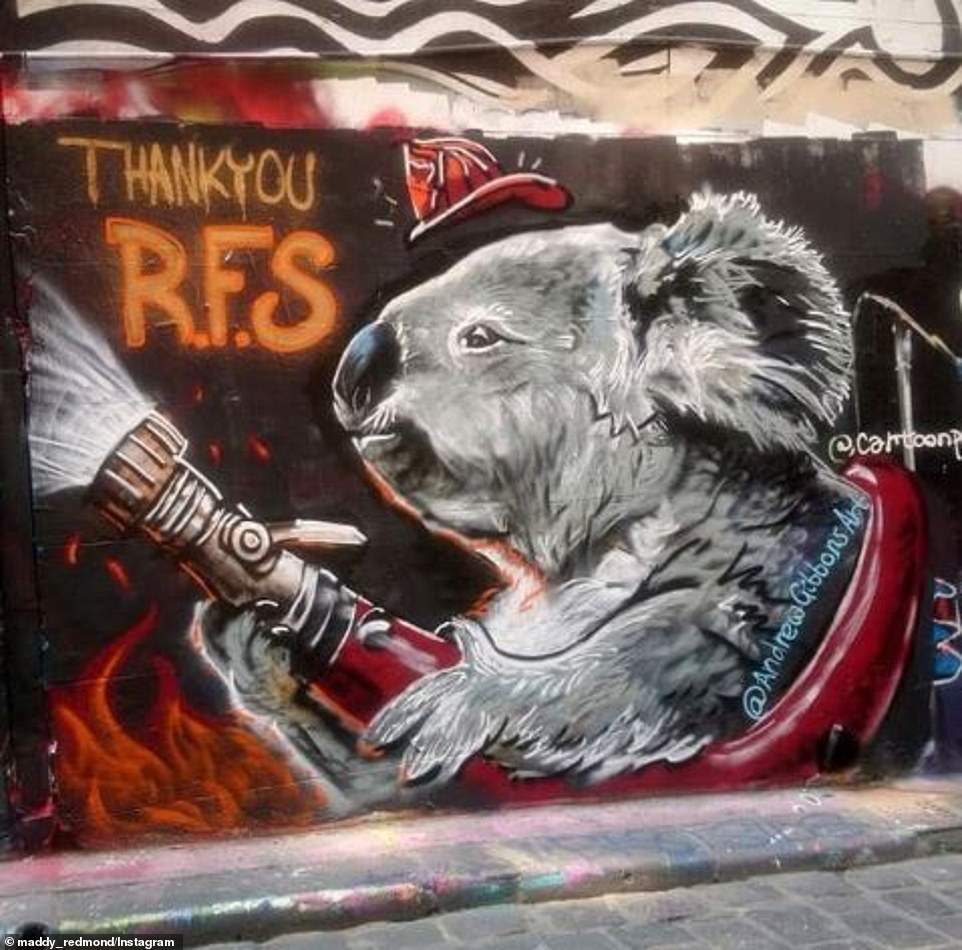 A tribute to Australia’s firefighters was sprayed on Hosier Lane following the tragic bushfires that ravaged the country. It was untouched in Saturday’s attack 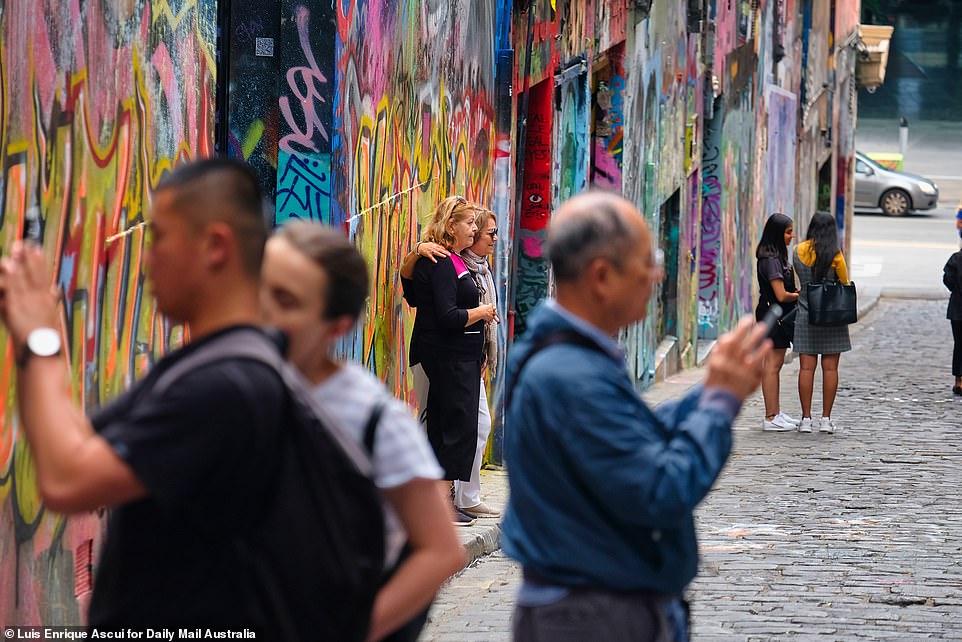 There are no rules as to who can and cannot contribute to the hallowed walls, but an inexperienced tagger would do well not to tag over the real deal.

Despite what most may believe, spraying the walls along Hosier Lane is not legal and never has been.

‘We see this act as vandalism particularly given the damage they’ve done to the pavement and cobblestones.’

‘Council contractors attended Hosier Lane this morning to clean the cobblestones and curbing.’ 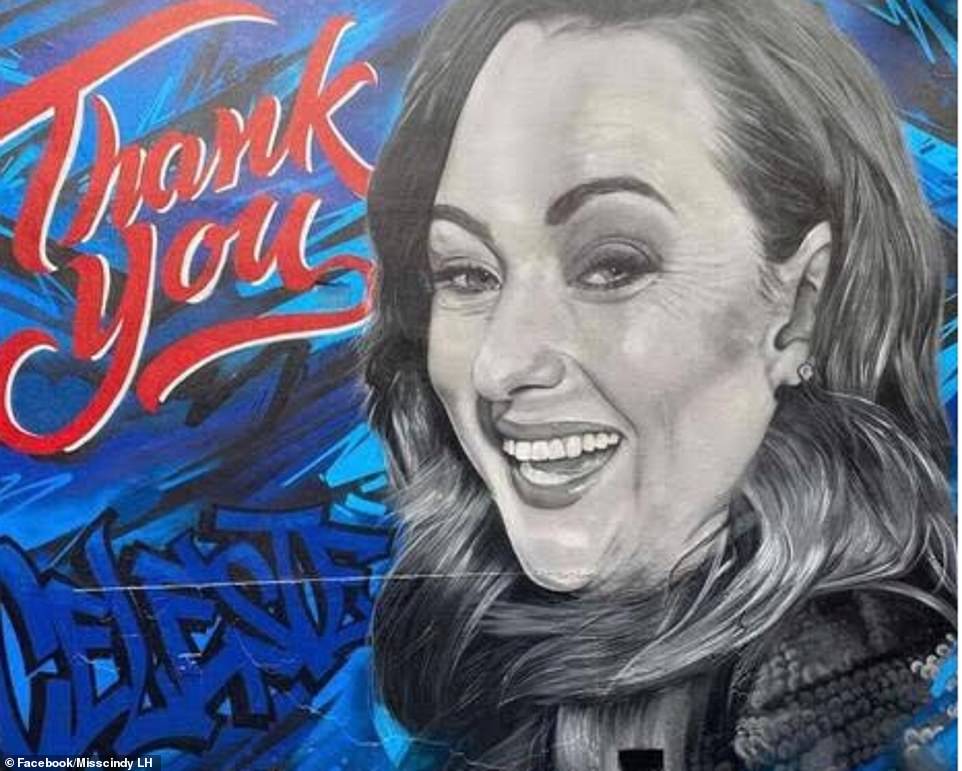 Before: A mural to comedian Celeste Barber appeared along Hosier Lane after her fundraiser for those affected by the recent bushfires.  It was defaced in last weekend’s attack 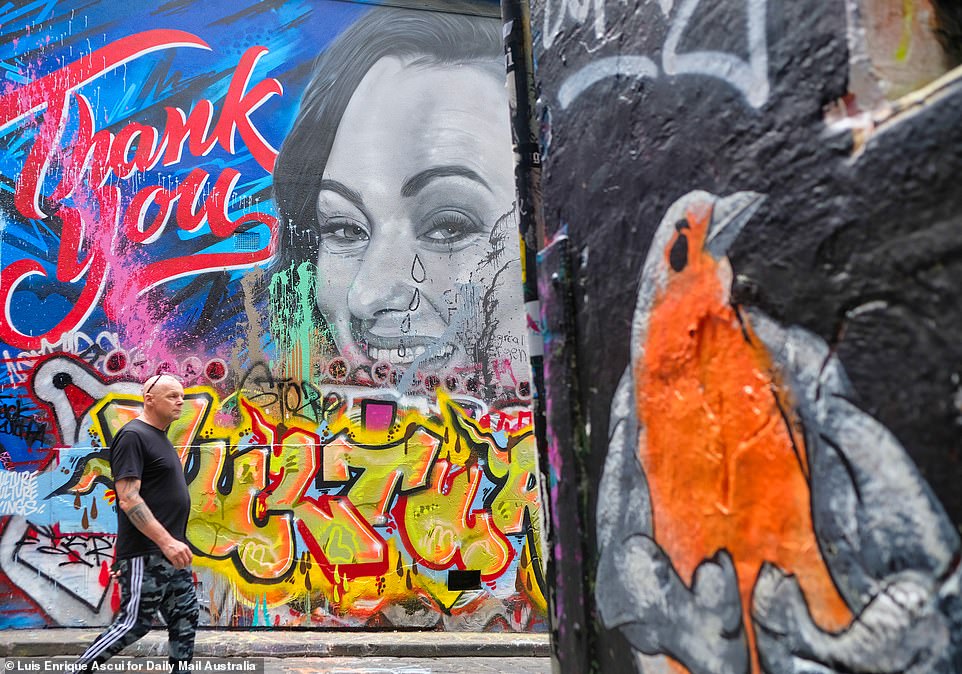 It is hardly surprising that no-one stopped to intervene in a city that has become gripped with mindless violence in recent years.

Melbourne East police are investigating the attack and urge any witnesses or anyone with information to contact Crime Stoppers on 1800 333 000 or submit a confidential report online at www.crimestoppersvic.com.au

Manchester United’s ‘£16million summer tour might not go ahead’ due to...