Is University Challenge getting too EASY? Viewers report ‘double figure’ points thanks to pub-quiz style questions on US TV shows, British seaside towns and football – so, how would YOU score?

For many regular viewers of University Challenge, getting into double figures is the weekly dream… and it’s one that’s usually undone pretty quickly once the Physics and Maths questions begin.

However, recent episodes of the BBC2 academic quiz have seen fans of the long-running programme reporting higher-than-average scores, suggesting host Jeremy Paxman’s teasers may well be getting a little less taxing.

While Manchester’s brainboxes proved victorious with a score of 200, Edinburgh’s three-man, one lady team will march on too after they scored an impressive 155.

And at home, it seems plenty of viewers were marking up personal bests, grabbing easy-win points with questions about British seaside towns, English football and US television series.

A newly bespectacled Paxman served up plenty of mind-boggling questions, but for mere mortals watching there seemed to a good smattering of ones that might feature in a mid-week quiz at your local boozer.

Some of those that allowed viewers to rack up the points included questions about screwdrivers and spanners, comedy shows, the emblem of the Woodland Trust and locating British seaside towns on a map – with additional clues on nearby towns and population size.

Unsurprisingly, Manchester University rattled through their coastal towns bonus round, taking all the points on offer.

HOW MANY OF THE FOLLOWING UNIVERSITY CHALLENGE QUESTIONS CAN YOU CORRECTLY ANSWER?

A comedy drama that stars Brian Cox as an ageing media tycoon and concerns family squabbles for control of the company following a decline in his health?

Two leaves of a deciduous tree from the emblem of the conservation charity the Woodland Trust. It’s scientific name is Quercus Robur, what is it more commonly known as?

‘Bildungsroman’, ‘feminist’, ‘orphan’, ‘governess’ and ‘Victorian’ are among words that search engines associate with which novel? First published in 1847 under a pseudonym…

Which six-letter term precedes words such as spanner and screwdriver in the names of tools that allow a measurement of the force in question?

Born in Mississippi in 1911, which writer’s plays often deal with sexual and violent impulses?

Name the town marked in orange, which has a population of around 10,000 and is near Brighton and Hove? 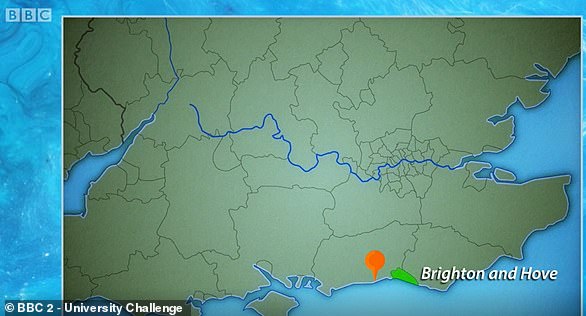 Who is the only English player to have won the European golden boot – given to the player who’s scored the most goals in the top division of one on Europe’s national leagues. He played for Sunderland from 1997 to 2003.

I want to go to China and see Japan. Those words appear on the title track from which 1980 Joan Armatrading album?

In the colour codes used on European gas cylinders, what specific gas is indicated by white?

Which Southern State is the setting of Fannie Flagg’s 1987 book Fried Green Tomatoes at the Whistlestop Cafe and of Harper Lee’s To Kill a Mocking Bird?

A statue of which composer in Vienna is based on an illustration of 1764 showing him as a child performing with his father and sister?

Which comedy ran from 2003 to 2015, making notable use of interior monologues and pointed view shots? It follows the life of two dysfunctional friends… 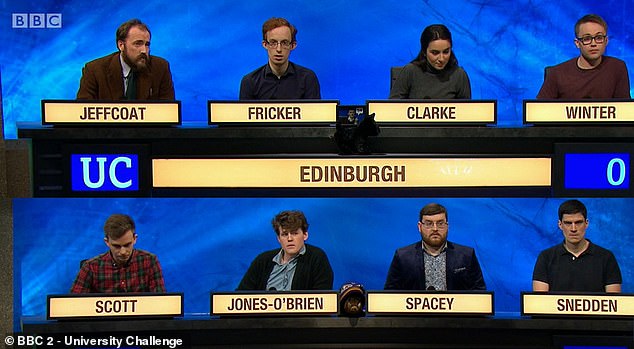 Both teams scored well, with Manchester beating Edinburgh 200 to 155…but Edinburgh’s impressive marks means they will also march on in the competition

Can you name the Essex coastal town highlighted in orange? Manchester breezed through this picture round (answer: Southend-on-Sea) 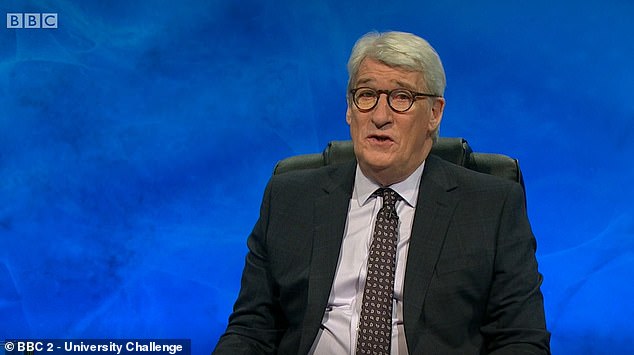 A newly bespectacled Paxman served up plenty of mind-boggling questions but is the respected academic quiz getting a little easier?

On Twitter as the show reached its crescendo, there were plenty of reports of high scoring at home.

@markcf83 boasted that he’d made a very impressive 45 points, while @LornaETR told how she’d recorded a ‘personal best’.

The show has just one more episode before the first round is over with some viewers already suggesting who the stand-out stars of the series may be.

Despite the show still being in its earliest round, there’s already been an impressive roster of characters to rival fan favourite Eric Monkman this series.

Seoan Webb, who’s studying Ancient and Modern History at Oxford’s Corpus Christi College, was tipped to be the break-out brainbox early on.

In August, Webb’s ‘thousand-yard stare’ left viewers cold – and impressed – with his ‘merciless’ intellect as he gained most of his team’s points after they conquered Bristol University 175 to 135.

There has been controversy surrounding University Challenge this series though, as viewers have been increasingly distracted by the lack of diversity amongst contestants.

Last week’s episode saw an all male line-up of the show.

Just six women have featured in the last six episodes of the programme, compared to 36 male contestants, despite the fact that more women than men attend university in the UK.

University Challenge airs on BBC2 on Mondays at 8pm