‘The bag is empty, much like her soul’: Jilted lover successfully sells his ex’s fake Jimmy Choo handbag with an ad that lists the MANY negative features they have in common

A jilter lover has sold his ex-girlfriend’s fake Jimmy Choo handbag on Facebook marketplace after detailing their many similarities.

An Australian man advertised the fake blue designer bag to a buy, swap and sell Facebook group on Friday for $20.

‘Selling my ex-girlfriend’s fake Jimmy Choo handbag. It matched her persona quite well, fake and leathery,’ the man wrote in the Facebook post.

The man said his ex-girlfriend resembled the bag because of her ‘excessive tanning and surgically enhanced chest.’ 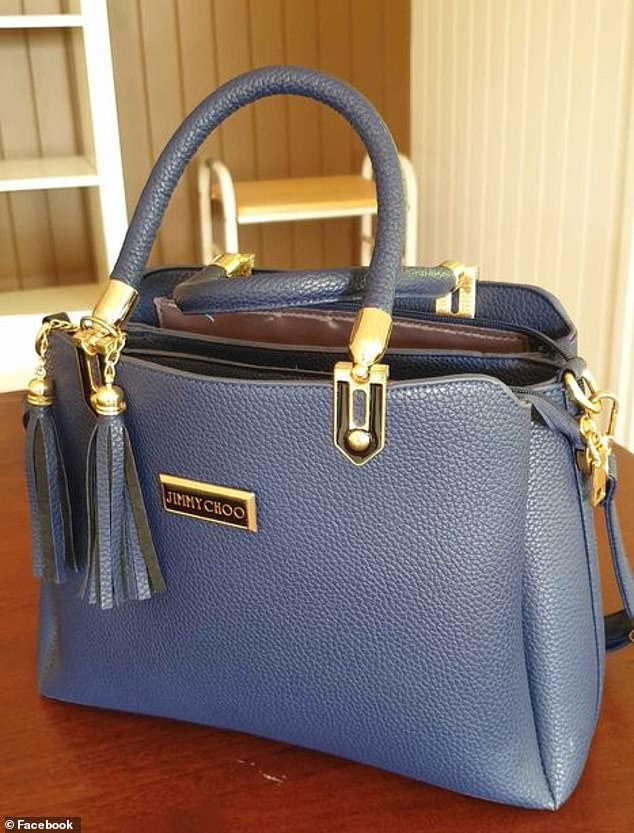 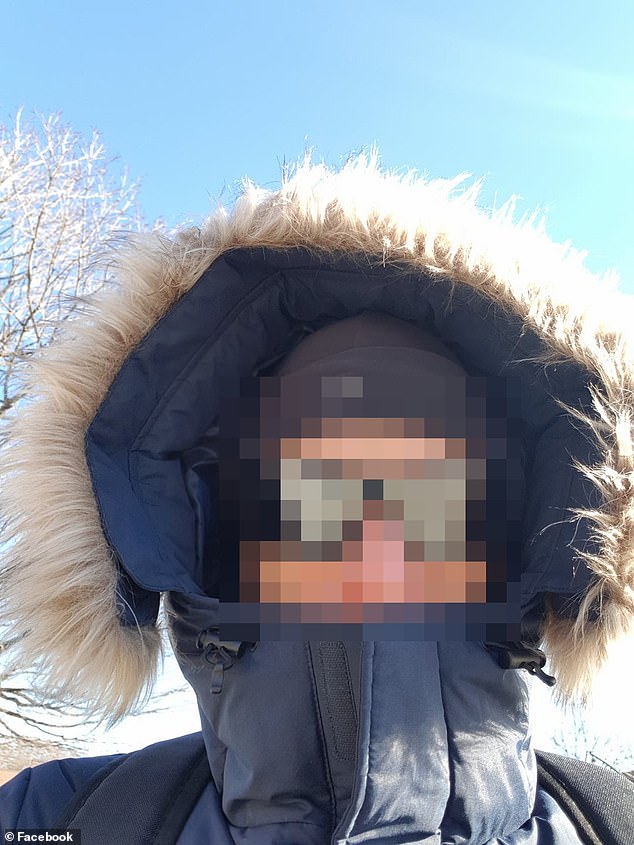 The man posted the fake designer bag to an Australian buy, swap and sell Facebook group on Friday and advertised the blue accessory for $20 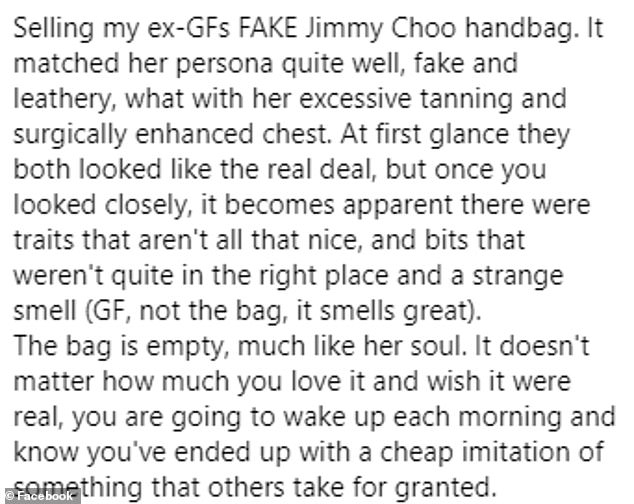 He wrote a hilarious description (pictured) of the similarities between the bag and his ex-girlfriend. He said she was ‘fake and leathery’ and the bag was ’empty, much like her soul’

‘At first glance they both looked like the real deal, but once you looked closely, it becomes apparent there were traits that aren’t all that nice,’ he wrote.

The man also explained there were ‘bits that weren’t quite in the right place and a strange smell’.

‘Girlfriend, not the bag, it smells great,’ he added.

‘It doesn’t matter how much you love it and wish it were real, you are going to wake up each morning and know you’ve ended up with a cheap imitation of something that others take for granted,’ he said.

He ended the hilarious review by asking shoppers to pick up the bag from his home. 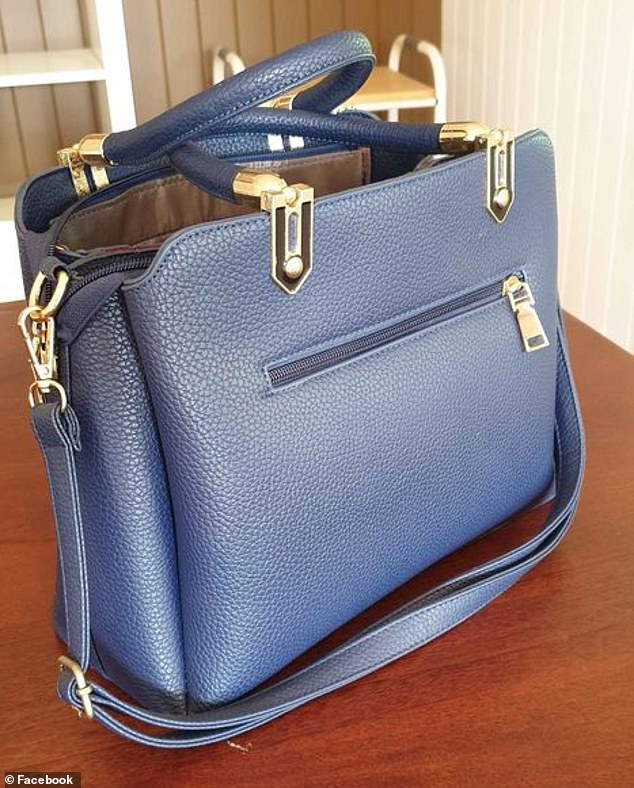 ‘Stop buying your girl cheap gifts, what do you expect,’ a group member said.

‘This was pre-existing baggage she came with,’ the jilted lover replied.

Social media users praised the man for writing the ‘best sale post ever’ and the bag was quickly listed as sold.

‘Brilliant! Plenty more real ‘bags’ out there,’ one user said.

‘I choked on my cup of tea reading this. That’s the best thing I’ve read all week!’

‘I think you’re a bit like the bag too – you’re blue, but you’ve got a handle on it,’ another commenter said. 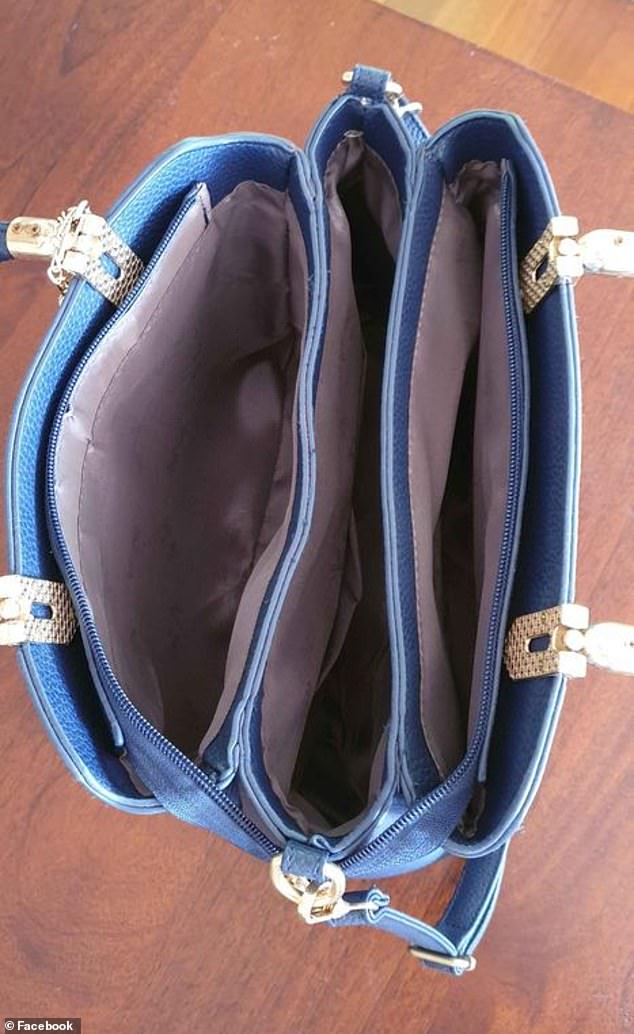 Actor Stanley Baxter, 94, reveals he is gay and tells of the sexuality he still wrestles

Thousands of Britons are left in agony as waiting times for...

Actor Stanley Baxter, 94, reveals he is gay and tells of...

Scientists develop a coating for socks that cures smelly feet