The planet, christened ‘WD 1856 b’ is located about 80 light years away in the northern constellation Draco.

White dwarfs are the incredibly dense remains of sun-sized stars after they exhaust their nuclear fuel, shrunk down to roughly the size of Earth.

WD 1856 b looms over its tiny star, which it circles every 34 hours thanks to an incredibly close orbit.

The planet is roughly 20 times closer to the white dwarf than Mercury is to the Sun.

Usually, as a star is dying, it engulfs its surrounding planets, meaning WD 1856 b is unique for somehow avoiding destruction.

This discovery shows that it is possible for Jupiter-sized planets to survive their star’s demise and settle into close orbits around the remaining embers. 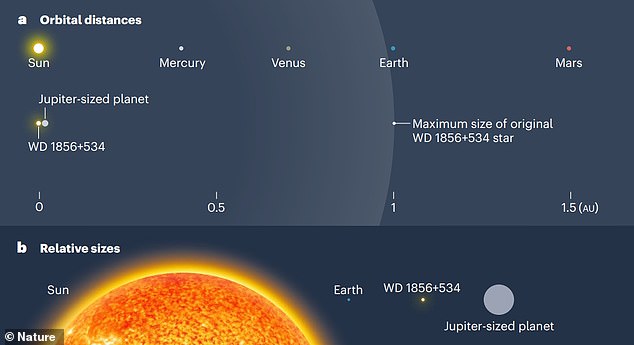 Comparison between the inner Solar System and a white-dwarf system. (a) shows comparison of orbital distances of our Solar System’s planets with WD 1856 b and white dwarf. All distances are in astronomical units (au), and the size of the giant star is shown to scale. The sizes of the other stars and planets are not shown to scale. (b) shows relative sizes of the Sun and Earth, and of WD 1856+534 and its orbiting planet

WHAT IS A WHITE DWARF?

A white dwarf is the remains of a smaller star that has run out of nuclear fuel.

While large stars – those exceeding ten times the mass of our sun – suffer a spectacularly violent climax as a supernova explosion at the ends of their lives, smaller stars are spared such dramatic fates.

When stars like the sun come to the ends of their lives they exhaust their fuel, expand as red giants and later expel their outer layers into space.

The hot and very dense core of the former star – a white dwarf – is all that remains.

White dwarfs contain approximately the mass of the sun but have roughly the radius of Earth, meaning they are incredibly dense.

The gravity on the surface of a white dwarf is 350,000 times that of gravity on Earth.

They become so dense because their electrons are smashed together, creating what’s caused ‘degenerative matter’.

This means that a more massive white dwarf has a smaller radius than its less massive counterpart.

‘It’s a pleasant surprise,’ said lead researcher Andrew Vanderburg at the University of Wisconsin-Madison in the US.

‘We’ve never seen evidence before of a planet coming in so close to a white dwarf and surviving.’

Vanderburg led the international collaboration of astronomers who analysed the data gathered by multiple light-reading telescopes, including NASA’s space telescope TESS and two large ground-based telescopes in the Canary Islands.

Researchers spotted a star whose brightness dimmed by half about every one-and-a-half days – a sign that something big was passing in front of it on a tight orbit.

But it was hard to interpret the data because the glare from a nearby star was interfering with TESS’s measurements.

To overcome this, the astronomers supplemented the TESS data from higher-resolution ground-based telescopes, including three run by amateur astronomers.

‘Once the glare was under control, in one night, they got much nicer and much cleaner data than we got with a month of observations from space,’ said Vanderburg.

White dwarfs are so much smaller than normal stars like our Sun – roughly the size of Earth.

Therefore, large planets passing in front of them block a lot of the star’s light, making detection by ground-based telescopes much simpler.

The data revealed that a planet roughly the size of Jupiter, perhaps a little larger, was orbiting very close to its star.

‘We can actually see WD 1856 b’s shadow passing in front of the star as it orbits, so we know that it’s there,’ Vanderburg said.

Vanderburg’s team believes the gas giant started off much farther from the star and moved into its current orbit after the star evolved into a white dwarf.

The discovery raises questions about the fate of planets orbiting stars, which are destined to become white dwarfs.

Our Sun, for example, is set to burn out and die in about 5 to 10 billion years. 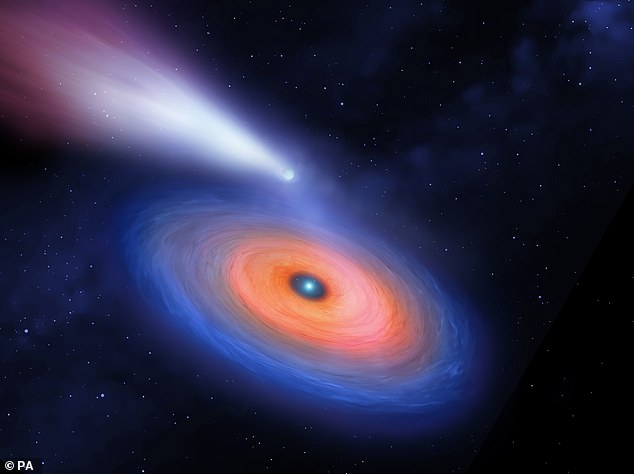 Artist’s impression of a giant planet orbiting a dead white dwarf star. White dwarfs are the incredibly dense remains of sun-sized stars after they exhaust their nuclear fuel

Of the thousands of planets outside the Solar System that astronomers have discovered, most orbit stars will eventually evolve into red giants and then into white dwarfs.

During this process, any planets in close orbits will be engulfed by the star – but this is a fate that WD 1856b somehow managed to avoid.

‘Our discovery suggests that WD 1856b must have originally orbited far away from the star, and then somehow journeyed inwards after the star became a white dwarf,’ said Vanderburg.

‘Now that we know that planets can survive the journey without being broken up by the white dwarf’s gravity, we can look for other, smaller planets.’

Last year, scientists at the University of Warwick claimed the first evidence of a giant planet orbiting a dead white dwarf star known as WDJ0914+1914.

Vanderburg said the new discovery is even more important because it’s the first intact planet orbiting a white dwarf – a crucial difference.

‘The big difference between this and the previous discovery of WDJ0914+1914 is that there they did not actually detect the planet in its orbit – they instead detected debris from it in orbit and falling onto the surface of the star,’ Vanderburg said.

Vanderburg and his team told MailOnline that they found no evidence for debris, indicating a intact planet.

‘This shows us that planets actually can survive the journey close to the white dwarf, which is important because it implies that other smaller and rocky planets could come close, where they would be warm enough to have liquid water on their surfaces and potentially be habitable, long after the star died.’

However, there ‘s just a slim chance that the Earth could survive the Sun’s red-giant phase in the distant future, the researchers believe.

The study has been published in the journal Nature.

WHAT WILL HAPPEN TO EARTH WHEN THE SUN DIES?

Five billion years from now, it’s said the sun will have grown into a red giant star, more than a hundred times larger than its current size.

Eventually, it will eject gas and dust to create an ‘envelope’ accounting for as much as half its mass.

The core will become a tiny white dwarf star. This will shine for thousands of years, illuminating the envelope to create a ring-shaped planetary nebula.

Five billion years from now, it’s said the sun will have grown into a red giant star, more than a hundred times larger than its current size (file photo)

While this metamorphosis will change the solar system, scientists are unsure what will happen to the third rock from the sun.

We already know that our sun will be bigger and brighter, so that it will probably destroy any form of life on our planet.

But whether the Earth’s rocky core will survive is uncertain.

What will Eugenie and Jack Brooksbank name their baby? Bookies release name odds

What will Eugenie and Jack Brooksbank name their baby? Bookies release...

Experts pinpoint the key giveaways that reveal Carl Beech made up...