Locals in leafy Altrincham and Hale have hit back after a row over their geographical boundaries, insisting they don’t live in Greater Manchester and shouldn’t be included in the area’s lockdown restrictions.

A major incident was declared by authorities in the metropolitan county this week following a rise in the number of coronavirus infections.

New measures in the north west forbid people from different households from meeting each other inside their homes or in gardens, while also banning separate households from mixing in pubs, restaurants and other hospitality venues.

However, the rules sparked a huge debate as it emerged areas traditionally classed as being in affluent Cheshire, such as Altrincham, Hale and Stockport, are in fact within the boundaries of Greater Manchester and therefore subject to restrictions.

Many took to Twitter to mock those unaware of their location, while others accused users of trying to sound ‘posher’ by claiming they were from areas such as those seen in ITV’s glamourous reality show, The Real Housewives of Cheshire. 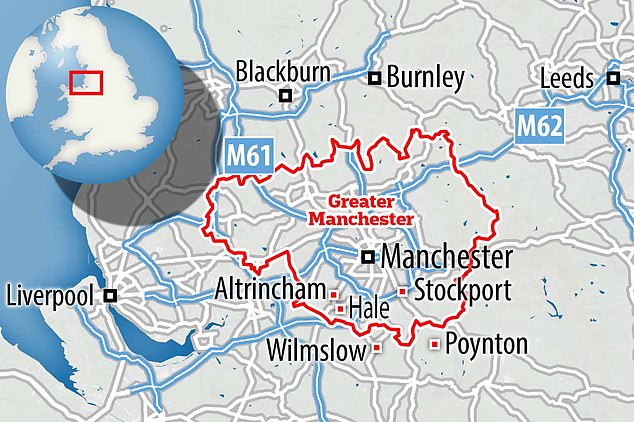 A map shows the boundaries of Greater Manchester, with towns such as Altrincham and Hale included within the metropolitan county, not within Cheshire, along with the likes of Wilmslow and Poynton, as many claim

Today, locals have hit back and insisted they do not live in Greater Manchester, despite what the official boundaries may say.

Tom Turton, 29, from Hale, said: ‘This area is Cheshire but it is confusing when you look at the different boroughs and you can see it applies to us but the rules are there for a reason and I’d rather there be rules.

‘I’ll do anything to help. I’m fortunate enough the my business is essential so I haven’t suffered too much and even if the lockdown gets heavier I can stay open.’

Helen Bland, 41, from Knutsford, hairdresser in Hale, said: ‘It is confusing because this is classed as Cheshire.

‘I was worried when I heard the announcement because I thought I’d have to close the hairdressers again but I was also confused about the rules in general.

‘We’ve had customers cancelling since the announcement so that’s worrying.

Baker Janet Deakin, 63, from Altrincham, said: ‘I’m not confused about this because know where I’m from and what my postcode is and we’re Greater Manchester, it’s Trafford but I am confused about the rules.

‘People don’t understand them so how can they follow them. I’m happy to follow them because hopefully it’ll be over quicker. The sooner it’s over the better.’

Vivian Kennedy, pictured left, and restaurant manager Massimo Vismara, pictured right, both insist the rules must be followed ‘because we want it over’

Massimo Vismara, 51, from Hale, restaurant manager, said: ‘This is Cheshire but I can understand why the rules apply to us.

‘We’re close to Altrincham so we’re kind of like a big town and a lot of people commute from here to Manchester so I’m not surprised we’re included.

‘I’m quite happy to follow the rules. I’m happy the government are helping out with restaurants but it does contradict the lockdown because more people are going out now and in confined restaurants.

‘We have noticed a lot of cancellations since the announcement. I’m not complaining about the rules because we want it to be over.’

Vivian Kennedy, 69, retired from Hale, said: ‘We’ve been included because we are classed as Trafford which is Greater Manchester.

‘I’m fine with it because I just want to stay safe. The big thing is staying safe.

‘It’s not important what area because we’re in the middle of a pandemic so what the hell, we have to just go with it.’

Retired Liz Smith, 79, from Hale, said: ‘Its confuses people of my age because we know we can go and stay in a hotel for a little holiday but I can’t have people round at my house.

‘I’m meeting friends in the outdoor areas of restaurants because we know we can do that.

‘We’re in Cheshire and my postcode is Cheshire and I’ve lived here for fifty years. I understand why we’re included in the lockdown because my local Sainsbury’s has had a spike.

‘You’ve just got to get on with it and use your common sense.’

Retired Liz Smith, pictured left, and hairdresser Helen Bland, pictured right, have both been left confused by the geographical boundaries

Dominic Mcgloan, 42, roofer, from Hale, said: ‘I’m confused about the whole thing and I’ve been confused from the start.

‘This is definitely Cheshire and not Greater Manchester but I don’t think there should have been a lockdown anywhere like in Sweden.

Chris Grant, 34, manager at New Market Dairy Store in Altrincham said: ‘I have seen a lot on the internet about Trafford being supposedly part of Cheshire. I’ve always lived in Trafford and seen it as part of Manchester but now some people only seem to be discovering that it is!

‘I am concerned about how it will affect business and trade which was starting to pick up again. It is a massive kick in the balls.

‘Trade is probably about half of what it was before Thursday. The weekend is supposed to be nice so hopefully that will improve things. We don’t have many big groups coming to us so hopefully things will stay steady.

‘During the initial lockdown I saw a lot of groups of kids who didn’t seem to care. A lot of people were hanging around there. Maybe it was just a bit too soon to get people out mixing again and it is a bit early to see people out in restaurants again- the restaurants haven’t been that busy despite the scheme.

‘There is a lot of confusion about what people can and can’t do. You can see family in a pub but not in a living room?’

‘A lot of our customers here live just over in Cheshire can come here and mingle in Greater Manchester but it’s probably safer for them there! We have another branch in Macclesfield and I would say go there if you live in Cheshire.

It was hard to tell initially whether it was going to affect trade and whether people would be put off coming out. We do a lot of takeaway which in many ways is safer but it’s not part of the scheme which doesn’t make much sense. If people sit in they get 50 per cent off so more people are sitting in, is that safe?’

Jake Mackintosh, 18, employee at Altrincham Market said: ‘With Altrincham and Hale being right on the border between Cheshire and Trafford some people definitely got confused.

‘A lot of people in Hale have a Warrington postcode and if you go out at night people don’t really care that much. Young people are ignoring it because they feel it is unfair even if it is for a good cause obviously.

‘A lot of people especially in Hale say they are from Cheshire because it seems better then saying you are from Trafford and some genuinely believe they are in Cheshire.

‘At the Railway pub in Hale they have changed the age limit to 21 because they were getting groups of 60 or 70 people in there. It’s a bit quieter now as lots of people have gone on holiday but I’m not too sure about that.’

Edward Capp, 47, who works at the Con Club restaurant in Altrincham said: ‘I think it is ridiculous and should not have happened.

‘I live in Ashley, Cheshire and commute here for work. There is confusion whether this area is Manchester or Cheshire and people prefer to label themselves as being from Cheshire. I have not noticed it get quieter here.’

Batch Bottlestore and Deli co-owner Chris Bardsley, 30, said: ‘I see myself as being from Manchester but people here often don’t and are looking for some way out of it.

‘I disagree with the way the announcement was made on a a Thursday night just before a weekend. About thirty per cent of our customers cancelled their table bookings on Friday. We were trying to move people outside but it was already full.

‘It is really hard to enforce as people can just say they are a household or give false information to track and trace.

‘Eat Out to Help Out is helping and is quite good but we might see it quieter on Thursdays and Fridays now instead.’ 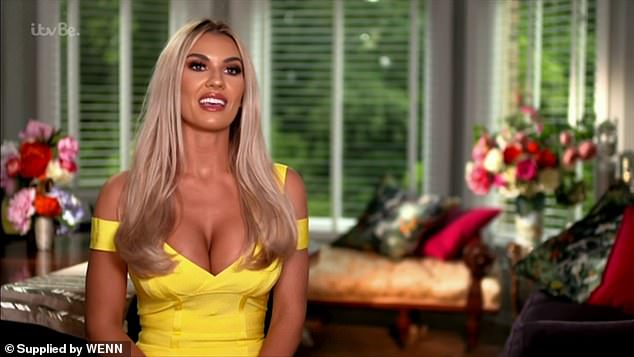 Many took to Twitter to mock those unaware of their location, while others accused users of trying to sound ‘posher’ by claiming they were from more affluent areas, such as those seen in ITV’s glamourous reality show, The Real Housewives of Cheshire (Pictured: Gabriella Bardsley on the show) 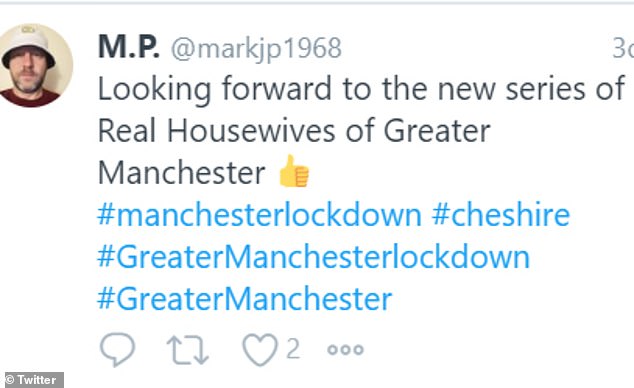 Another said: ‘Watching people argue over whether Stockport is part of Greater Manchester or Cheshire has been highly enjoyable’

A third quipped: ‘A lot of people today realising that they are in Greater Manchester, and not Cheshire as their estate agent advertised’

Out of the top 20 worst affected local authority areas for Covid-19 infections in England, Greater Manchester boroughs – home to almost three million people – comprise more than a third of the list, with seven entries.

Dozens of comments have been made about the confusion over the boundaries on social media in recent days.

One joked: ‘Proving to people who claim they live in Cheshire, that they do not, and instead live in Greater Manchester has made this entire pandemic worth it. Get lost Altrincham.’

A second added: ‘The number of Stockport residents across social channels asking if it’s in Greater Manchester or Cheshire is quite depressing. Imagine not really knowing where you live.’

Another quipped: ‘Looking forward to the new series of Real Housewives of Greater Manchester’.

The area was previously referred to as SELNEC, made from the initials of ‘South East Lancashire North East Cheshire’, but the metropolitan county of Greater Manchester was then established in 1974, creating boundaries between many towns and villages.

A Twitter user wrote: ‘The number of Stockport residents across social channels asking if it’s in Greater Manchester or Cheshire is quite depressing. Imagine not really knowing where you live.’ 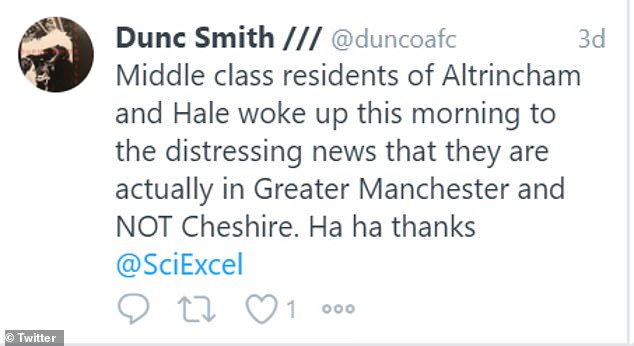 This joker quipped: ‘Middle class residents of Altrincham and Hale woke up this morning to the distressing news that they are actually in Greater Manchester and NOT Cheshire’

It comes as it emerged yesterday 80 per cent of new Covid-19 cases in one badly-hit part of Greater Manchester are among white people.

Councillors in other parts of the North West — including Blackburn — have warned spikes in coronavirus cases are being driven by the Asian community.

But Eleanor Roaf, director of public health in Trafford, says cases in the borough — home to 235,000 people — are centered in the ‘nice leafy suburbs’.

She fears a ‘complacent white middle class’ will wrongly believe the disease is ‘not affecting them because it’s about overcrowding in ethnic minority families’.

Michael Gough has found his calling as the Don Bradman of umpiring!

Artemisia Gentileschi’s rape and torture was even more grisly than her...

Michael Gough has found his calling as the Don Bradman of...