By Katie Weston For Mailonline

This is the shocking moment a man in his pants confronts police in the street with a two-foot-long machete.

Footage shows a man dressed in black underwear, socks and shoes walking along the pavement in Palmers Green, Enfield, North London, while holding the bladed weapon.

The person recording the clip can be heard saying ‘only in Palmers Green’ before sirens are heard in the background and two police officers approach the man. 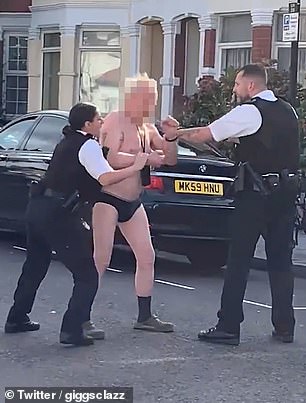 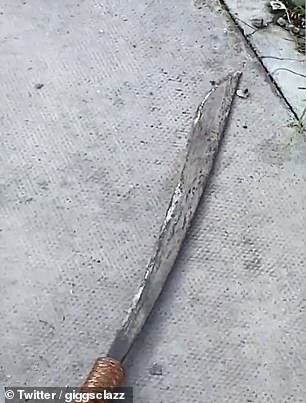 The man dressed in black underwear, socks and shoes seen being restrained by two police officers, left, and the bladed weapon which he was holding earlier in the footage, right

One cop says ‘drop the knife’, which the man obliges to, before he is restrained and pushed to the floor by the pair, who are aided by a passerby.

He is then seen being handcuffed and held down, before turning his head to say ‘I will get you’ to the female police officer.

While being held down, the man can be seen turning his head and saying ‘I will get you’ to the female police officer.

One of the constables is filmed gesturing towards the weapon and telling a bystander: ‘Leave it there, it’s fine.’ 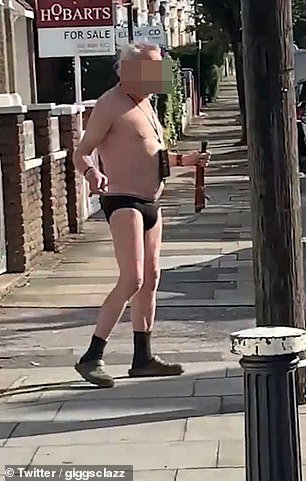 The man seen walking along the pavement while holding the bladed weapon, above, at the start of the footage, which was posted to Twitter this morning 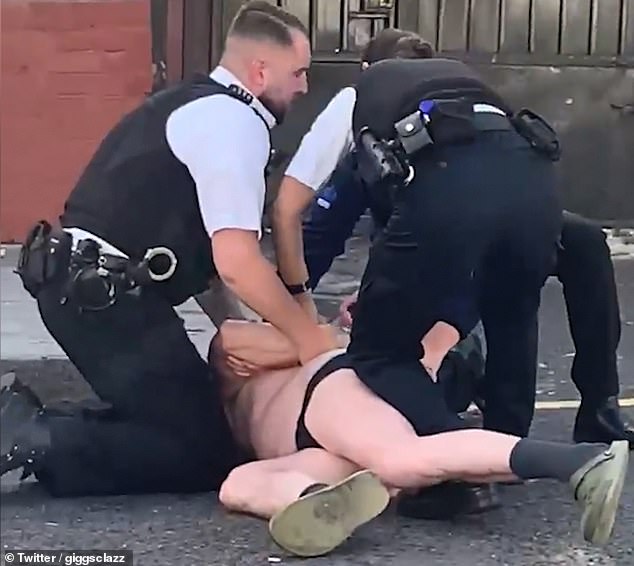 Two police officers and a passerby seen holding down the man in the video clip, while he is handcuffed before being led away into a police van

Three people stand watching the scene unfold behind the man, as he says ‘stop hurting me’ while the two officers order him to stand up.

He is then led into a nearby police van, while the cameraman comments: ‘That’s enough excitement for one day.’

The clip was posted to Twitter at around 11am today, captioned: ‘Just now in Palmers Green’.

Victoria Derbyshire says she will BREAK the rule of six for...

USMNT’s Sergino Dest – I joined Barcelona to play against the...