The return of Sergio Aguero outweighed the loss of Kevin De Bruyne as Manchester City edged a tough encounter with their first clean sheet of the season.

This was determined rather than dazzling City with Raheem Sterling showing the benefit of resting during the international break by scoring the only goal after 23 minutes.

Aguero, who looked relatively sharp given he’d missed the last 17 matches since undergoing knee surgery in June, had a part to play in the winner, feeding Phil Foden’s whose shot was parried by Bernd Leno into the path of Sterling to slot in his fourth goal in three games. 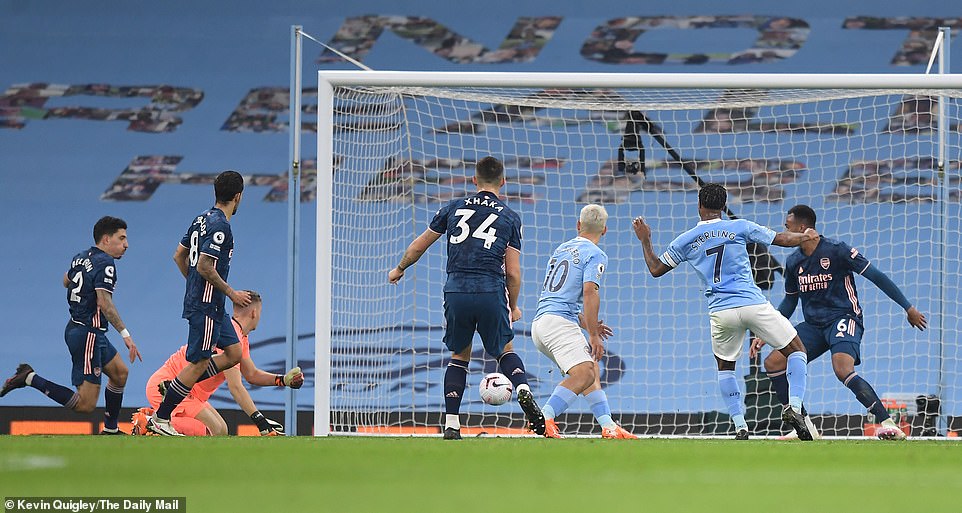 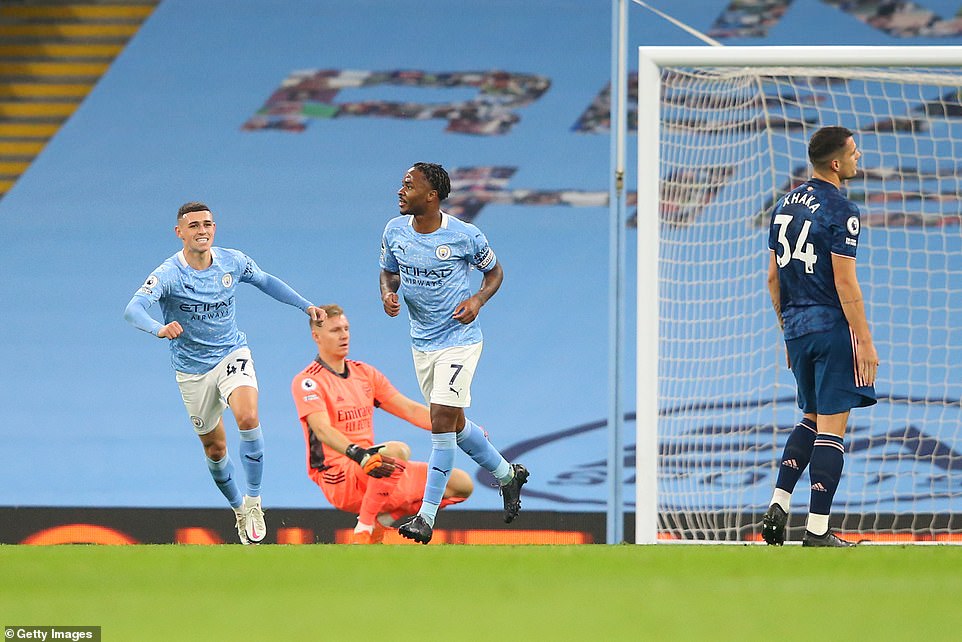 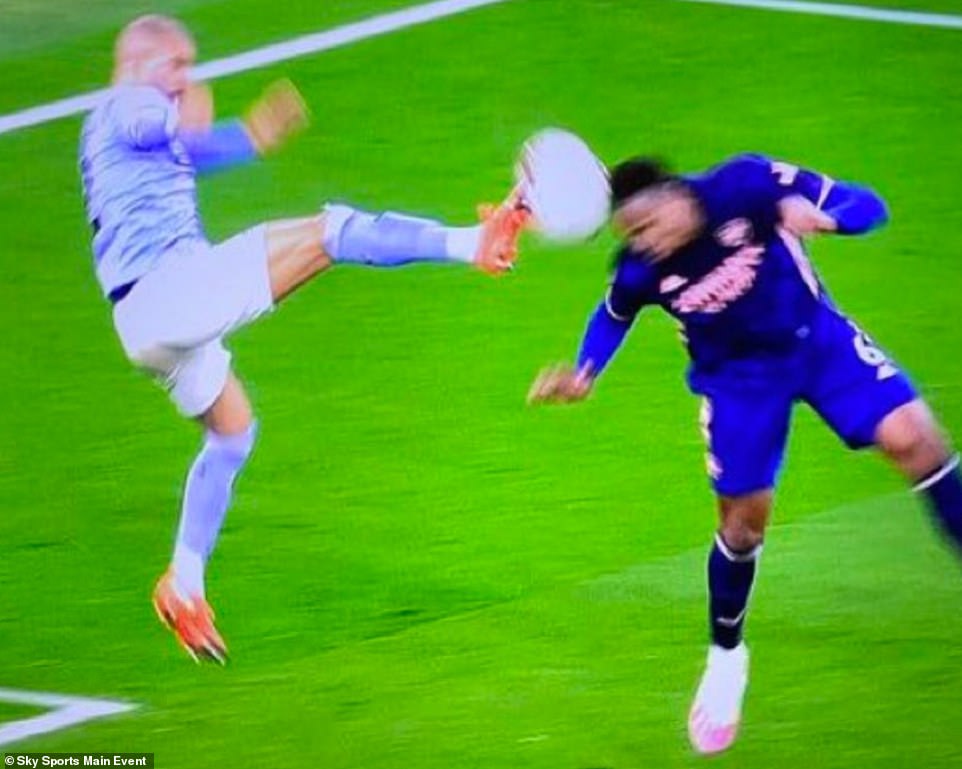 The hamstring problem that caused him to miss England’s triple-header against Wales, Belgium and Denmark had clearly passed and Pep Guardiola had good reason to be relieved with that.

In De Bruyne’s absence due to a muscular issue, Sterling took on some of the responsibility for midfield creativity as well as getting forward to help Aguero. Just as important, City looked more solid at the back after shipping five goals to Leicester in their last outing at The Etihad.

With Aymeric Laporte missing, regular right-back Kyle Walker slotted in the middle of defence where he also played for England and helped lock the door on Arsenal danger man Pierre Emerick Aubameyang, who still hasn’t scored since signing a bumper new contract a month ago.

City-Arsenal fixtures take on a special meaning these days because of the relationship between Guardiola and Gunners boss Mikel Arteta, once master and apprentice at The Etihad.

They are already developing an interesting history as rivals. City beat The Gunners convincingly in the first game after lockdown when TV pundit Jamie Carragher predicted David Luiz would never play for Arsenal again.

Yet Arteta gained revenge by winning their FA Cup semi-final at Wembley and Luiz was in the starting line-up last night, stepping up from substitute when Rob Holding was injured in the warm-up.

City’s big news was welcoming back Aguero, the record goalscorer who hadn’t played since hurting himself against Burnley in June.

With Gabriel Jesus, Laporte and De Bruyne out, the Argentine’s return was welcome, and he looked ready from the opening minutes when he found space in the penalty area and twisted a header from Riyad Mahrez narrowly wide.

Arsenal have started the season in steadier form than City but it was the home side who took control with a fluid system that saw Rodri occasionally drop back to become a third central defender and allow Joao Cancelo and Nathan Ake to roam as wing-backs. 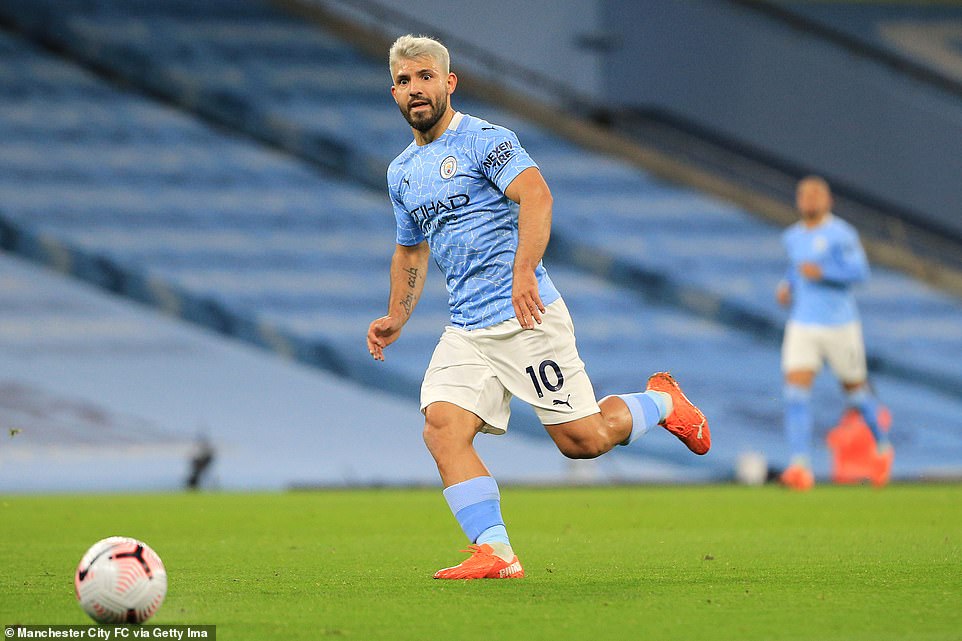 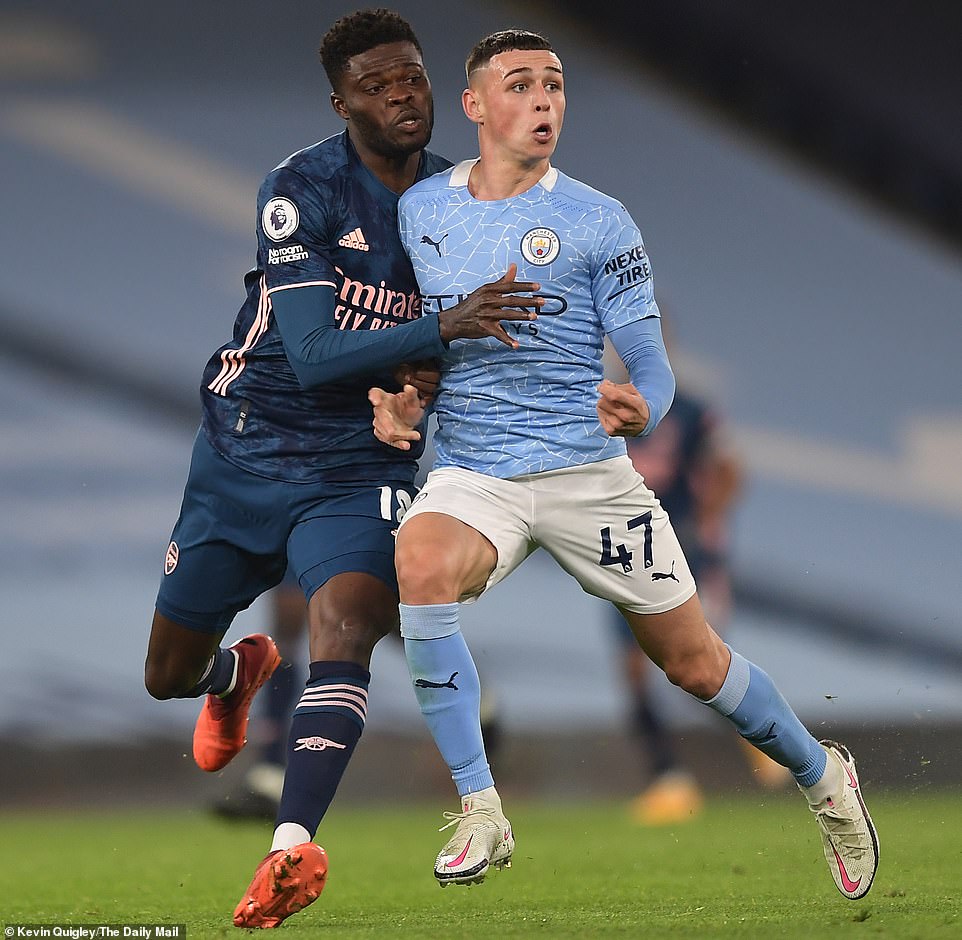 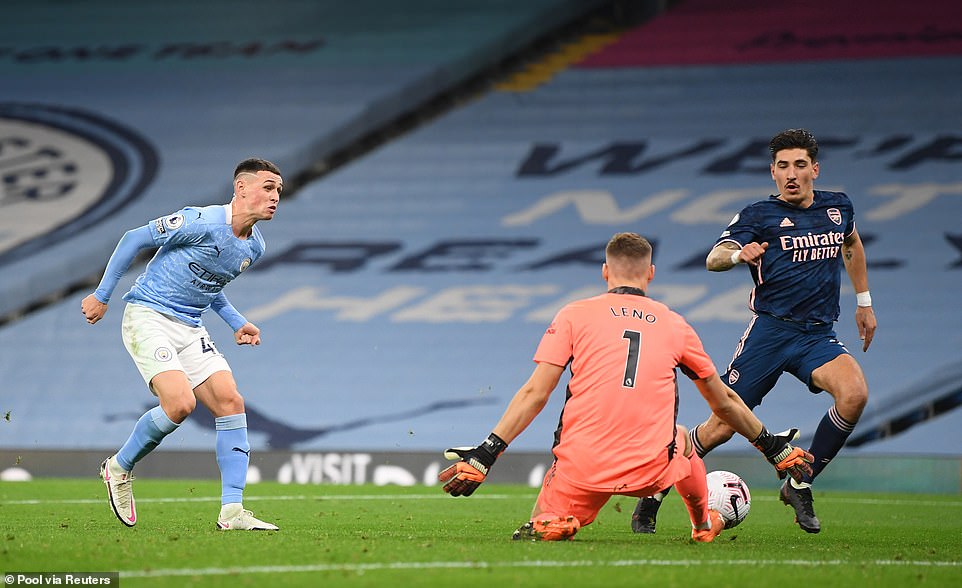 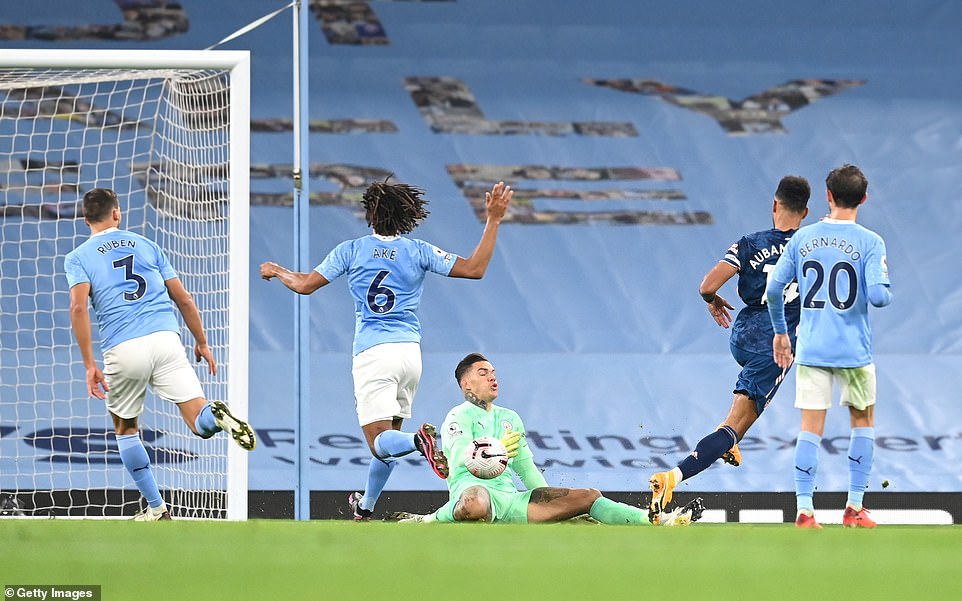 Arteta’s men were happy to sit deep, as they had done at Wembley when they won with two breakaway goals from Aubameyang, but this time they struggled to hurt City until the second half.

There was no denying City deserved the lead given to them by Sterling following a fine move which involved Aguero.

The striker, his hair heavily bleached, carried the ball from Mahrez’s pass deep into the Arsenal half and released Foden down the left.

The City youngster cut inside and fired in at Bernd Leno whose block fell kindly to Sterling who slotted in left-footed.

It was Sterling’s sixth goal in five Premier League games against Arsenal in the league and justified his withdrawal from international duty as a precaution over a tight hamstring.

Sterling and Bernardo Silva also stepped up to the plate to cover any lack of midfield creativity that might have occurred with De Bruyne’s absence. 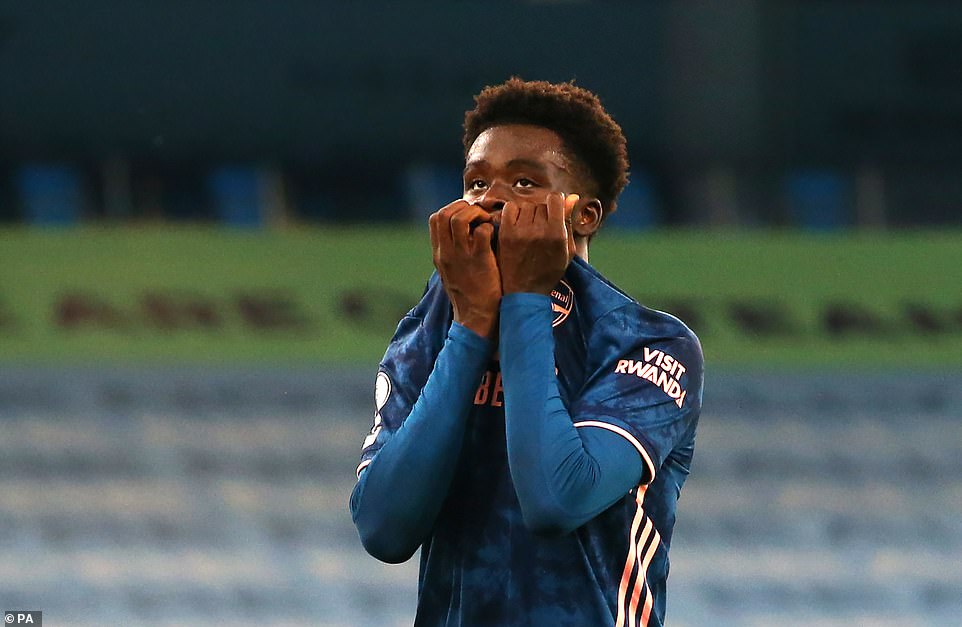 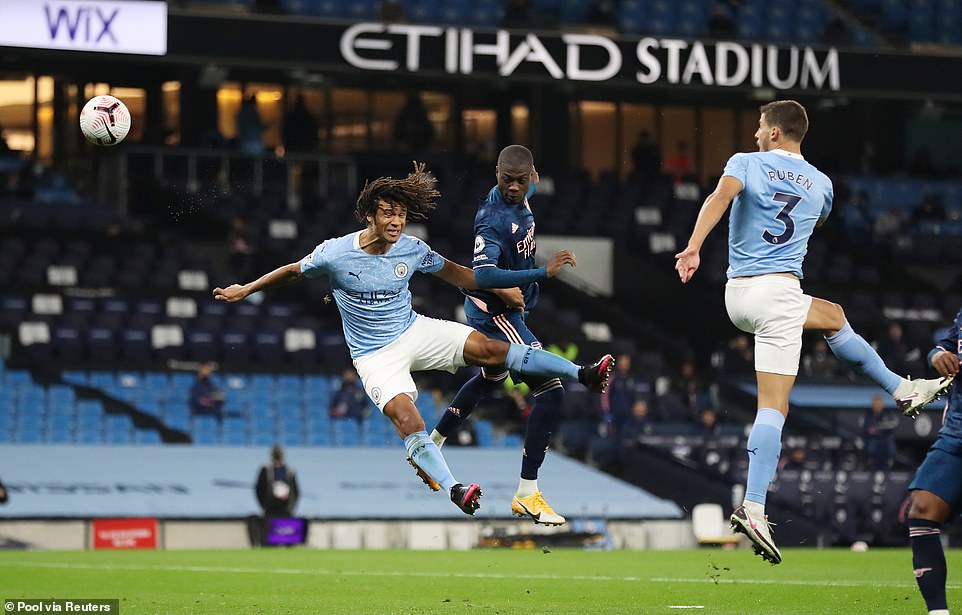 Nicolas Pepe went close straight after the break but couldn’t pick a corner, putting his header straight at Ederson 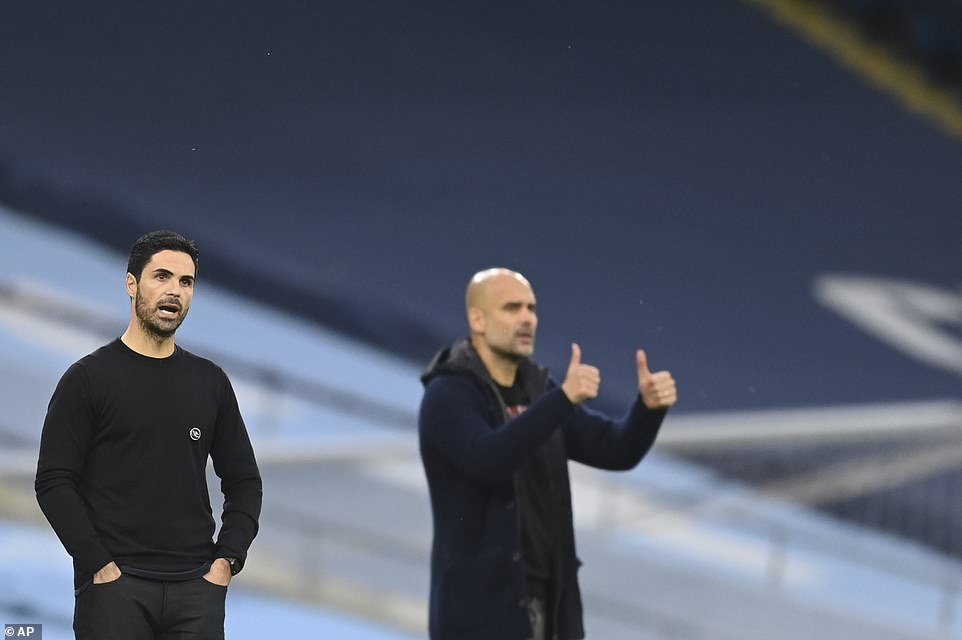 Mahrez tested Leno with a shot and then saw Gabriel get in an excellent block as he attempted to snaffle the rebound. Foden found space in the penalty area but decided to try and slip a low finish rather than attempt the dink and Leno spread himself to save.

Arsenal’s best outlet was youngster Bukayo Saka who has just been given his England debut by Gareth Southgate.

Some brilliant Arsenal football approaching half-time saw Saka and Aubameyang combine on the edge of the City box. The young winger burst into the area and his shot towards the top corner deflected off Ederson’s chest and flew wide.

There was more urgency from the visitors after half-time. Aubameyang, playing centrally, closed down Ederson so quickly the goalkeeper’s clearance cannoned off the Arsenal captain for a City throw near the byline.

The cries of encouragement from Arsenal’s assorted coaches and analysts dotted around the stadium grew louder in a mixture of English and Spanish.

Aguero was withdrawn midway through the second half having put in a good shift, with Ilkay Gundogan the replacement. 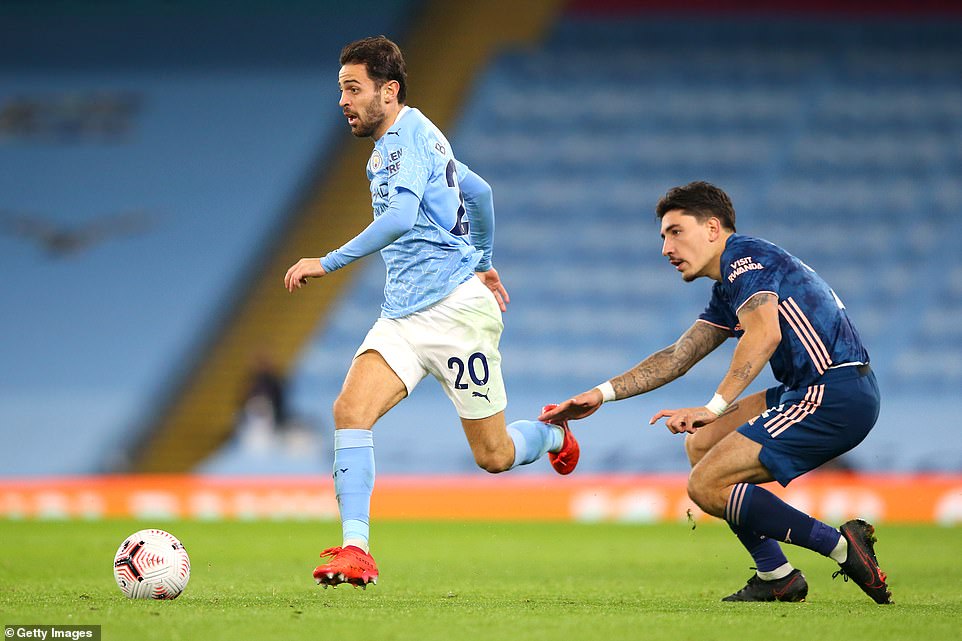 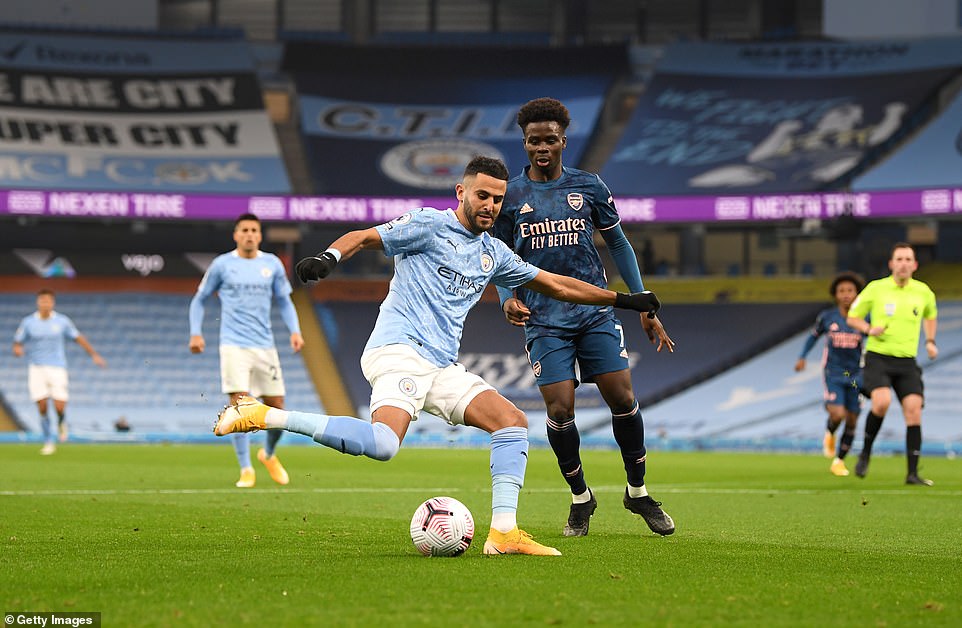 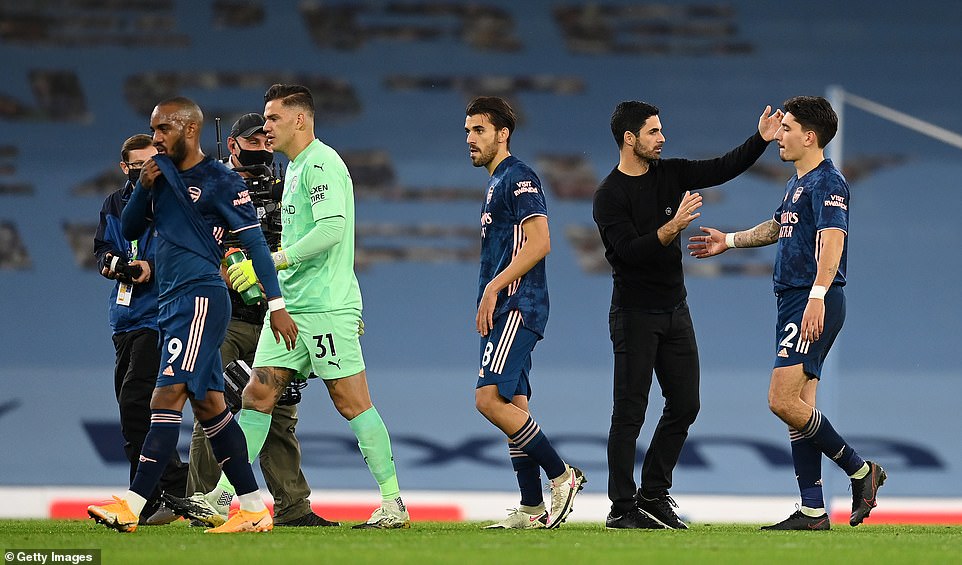 Out of habit, Aguero went to raise his hands to applaud the fans when his number came up – before realising the stadium was empty.

Grinning, he still applauded the handful of staff dotted about the stadium who were showing their appreciation.

Cancelo got a caution for scraping his studs down the back of Kieran Tierney’s achilles and Ruben Dias also saw yellow for stopping Saka in full flight.

Arteta threw on strikers Alexander Lacazette and Eddie Nketiah to try and take advantage any jitters City had. Jitters that were nearly soothed when Luiz almost put behind his own goal.

But it was The Gunners pressing for an equaliser in injury-time. The fact that City withstood the pressure and came away with a clean sheet and three points will delight Guardiola as much as some of the great tiki-taka stuff they are more used to.

RELIVE ALL THE ACTION HERE WITH SPORTSMAIL