Switzerland is lighting up the Matterhorn in a beautiful Alpine display to send a message of ‘hope’ and warn people to stay at home during the coronavirus pandemic.

The 14,600ft mountain was lit up in the colours of the Swiss flag last night in a projection which shone over the nearby resort of Zermatt.

The display is appearing every evening between sunset and 11pm, displaying messages including the English word ‘hope’ and the instruction to ‘stay home’.

Ski organisers in Zermatt say they want to ‘show solidarity with all the people who are currently suffering and are grateful to all those who are helping to overcome the crisis’. 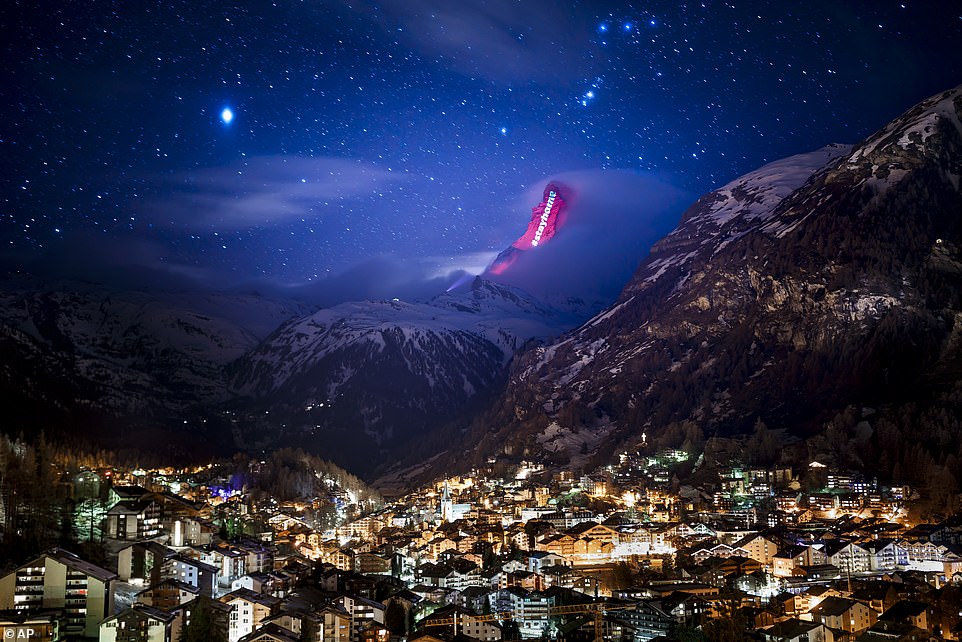 Message on the mountain: The Matterhorn is illuminated with a message to ‘stay home’ during the coronavirus pandemic, shown from the tourist resort of Zermatt which has shut its doors because of the crisis 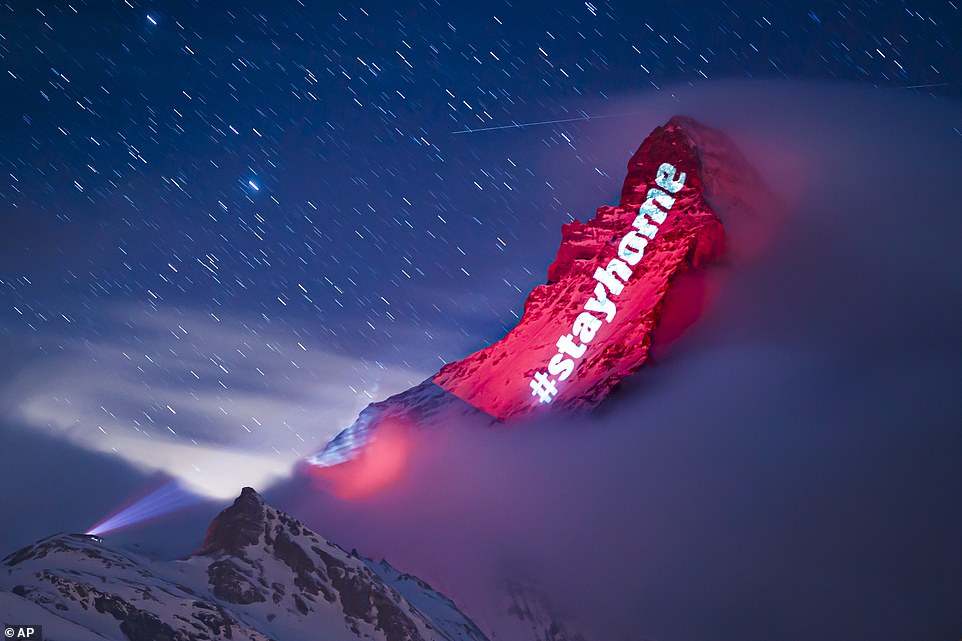 The Alpine mountain is being illuminated in the red and white colours of the Swiss flag, sending messages of ‘hope’ and an instruction to ‘stay home’ to stop the spread of the disease 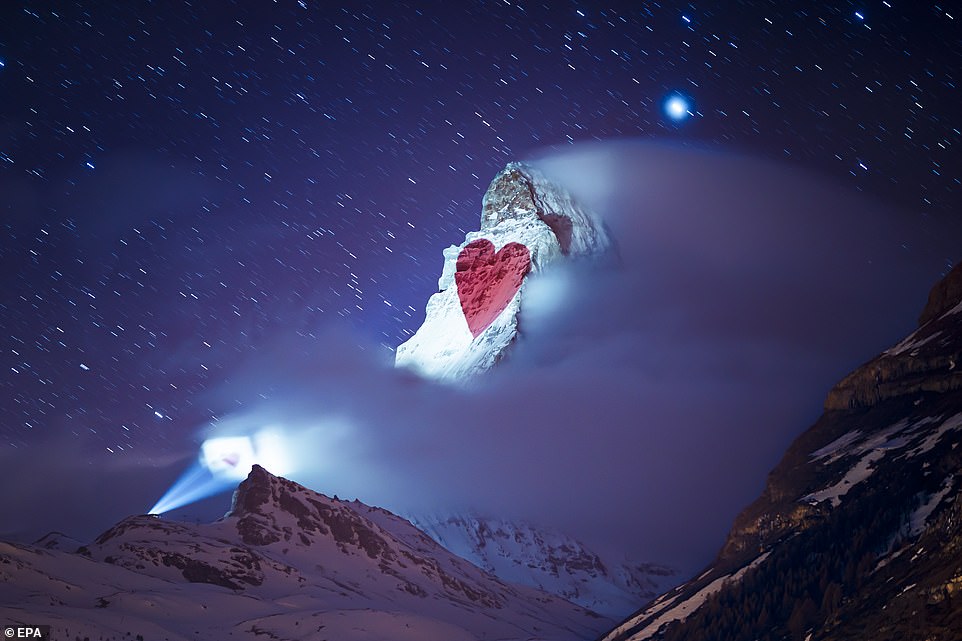 The projection installed by Swiss light artist Gerry Hofstetter has also displayed a heart (pictured above last night), an image of the Swiss flag and a German-language call for ‘solidarity’

The illumination was set up by Swiss light artist Gerry Hofstetter and is being broadcast on webcams so that people can watch without leaving their homes.

As well as the English words, the projection has also displayed a heart, an image of the Swiss flag and a German-language call for ‘solidarity’.

The tourist resort has been shut down until at least April 19 because of the pandemic, bringing its cable cars, mountain railways, and ski lifts to a halt.

All ski resorts have been shut down since March 13, although some regions of Switzerland had already imposed their own bans before then. 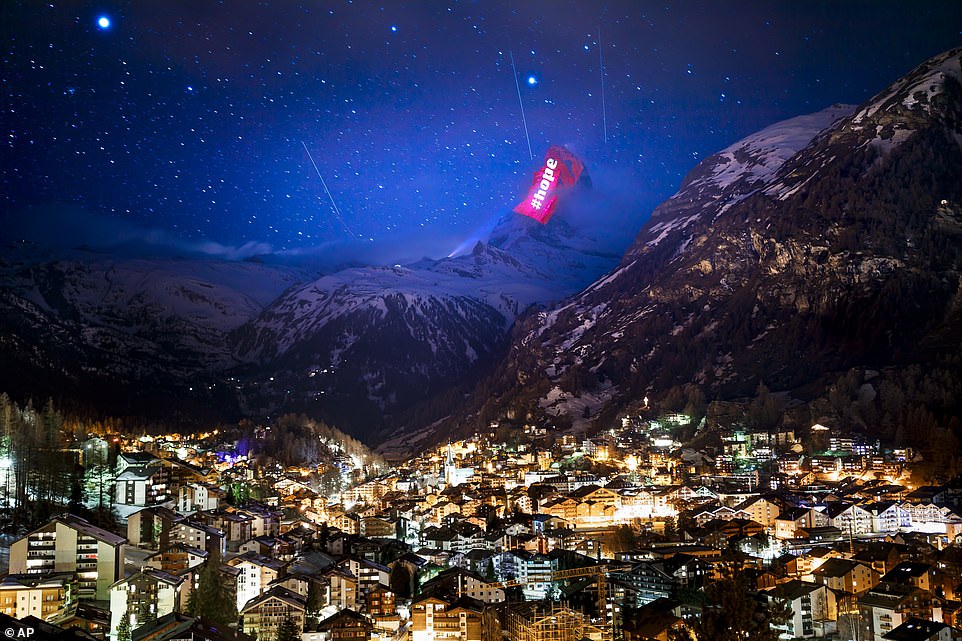 The light installation sends a message of ‘hope’ from the Alps, seen here from the resort of Zermatt where cable cars and ski lifts have come to a halt because of the coronavirus pandemic 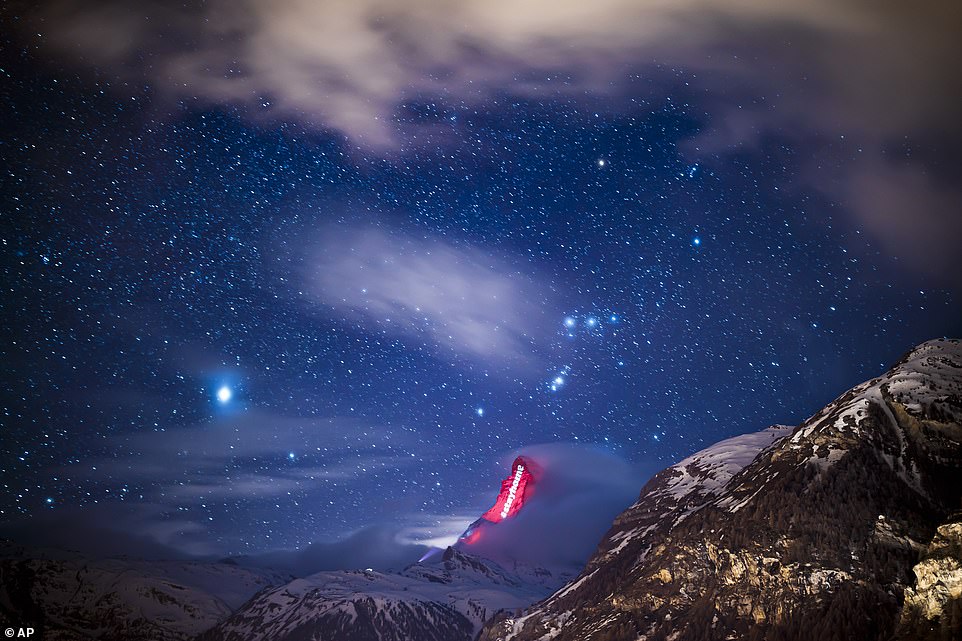 The mountain light projection sends the message ‘stay home’ last night, with Switzerland banning any gatherings of more than five people in a bid to slow the epidemic 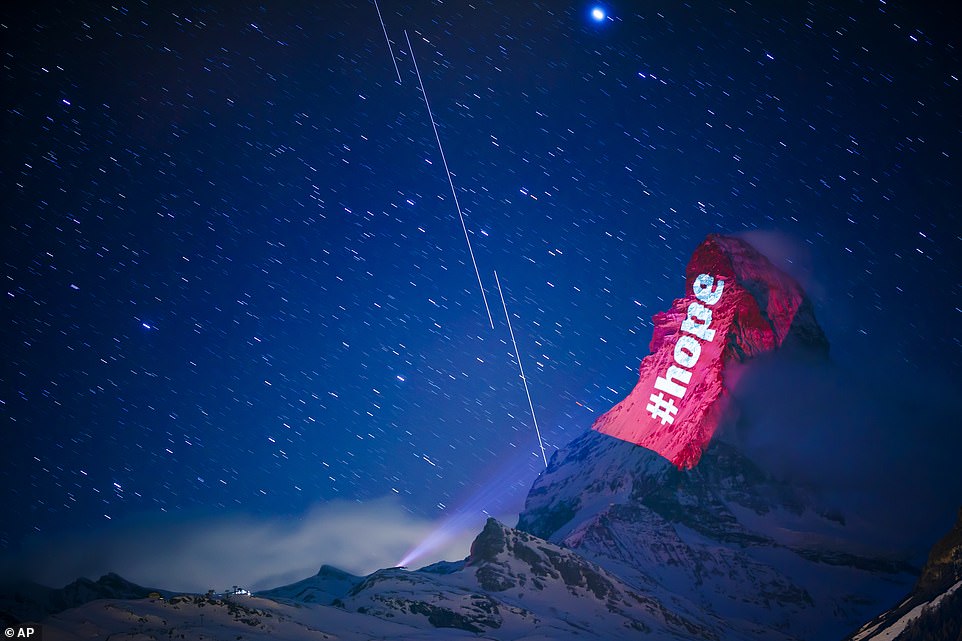 The health ministry said 10,714 people in the Alpine country have tested positive for the new coronavirus, after 949 new cases brought the total from 9,765 into five figures.

Switzerland has recorded 161 deaths from the disease.

The Italian-speaking southern region of Ticino, which borders hard-hit northern Italy, is the worst-affected of its 26 cantons, accounting for around 40 per cent of Swiss deaths.

Elsewhere, China, Iran and the United States have also passed the 10,000 mark, according to the latest World Health Organization situation report on the global pandemic. 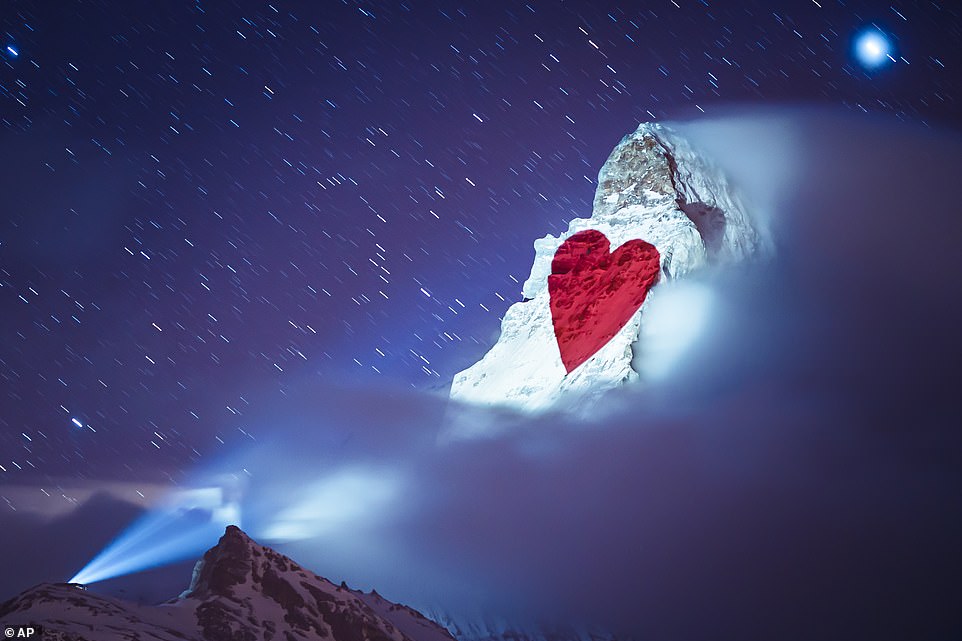 The light projection displays a heart from the side of the 14,692ft Alpine mountain, which straddles the border between Switzerland and Italy 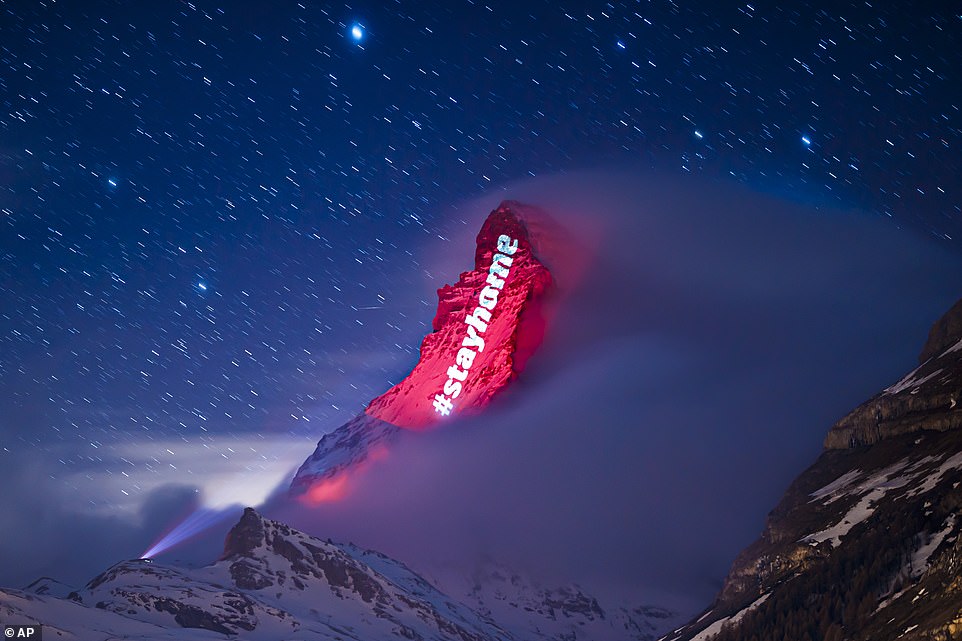 People in Switzerland are being told to stay at home to slow an outbreak which has already infected more than 10,000 people

In total, ‘91,400 tests have been carried out for Covid-19, of which 14 per cent were positive,’ the Federal Office of Public Health in Switzerland says.

Those testing positive have ranged in age from under one to 102, with a median age of 52 years old, and a near-even split of men and women.

The Swiss government has ordered the closure of schools and all places of leisure, including restaurants, bars and non-food shops.

Last Friday it went further, banning all gatherings of more than five people, while anyone standing closer than two metres to others risks a fine.

‘At the moment it would definitely be too early to talk about easing’ the restrictions, health ministry official Daniel Koch, who is heading the Swiss response, told a press conference in Bern.

‘We must first have proof that we have reached the peak of this epidemic – which unfortunately is not yet the case.’