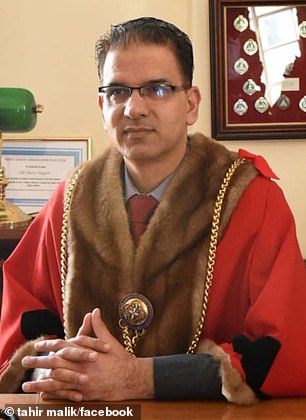 The Mayor of Luton stepped down down today from the role after breaking Covid-19 guidelines.

Councillor Tahir Malik said he regretted his actions which he said had been ‘below the standard of my position.’

A new Mayor will be appointed at the Full Council meeting on 29 September, who will serve for the remainder of the municipal year.

Following his resignation, Cllr Malik said: ‘Once again I regret my actions which were below the standard of my position and would like to sincerely apologise to the people of Luton for attending this gathering which was in breach of Covid-19 lockdown restrictions.

‘There is no excuse for what I did – I should have known better and I accept full responsibility for my actions.

‘I felt it was important for the disciplinary process – both at the council and within the Labour Party – to determine the outcome and the punishment for my actions, but after reflecting with my family over the last few days, we agreed that the best thing I could do for the town was resign from my position with immediate effect.

‘It has been a great honour to hold this office for the last 15 months. Pre-Covid, I attended hundreds of events across Luton and have met many thousands of incredible and inspiring people throughout my term. Luton is full of so many hardworking, selfless individuals who work every day to help other people and make the town a better place.

‘I have learnt a valuable lesson from this, but I hope the consequence of my actions serves as a reminder to the people of Luton of the importance of following the Covid-19 guidelines as it remains a real and serious threat.

‘My departing wish is to see our fantastic town and our communities pull together to beat this dreadful disease. We should continue to support, be kind and care for one another and recognise the way that people from all walks of life, faith and background have stepped up to help others during this crisis. The strength of the love and compassion in Luton’s communities will always outweigh the minority who will try to divide us.

‘I will continue to work hard for our communities and wish everyone the best of health and happiness.’

Cllr Hazel Simmons MBE, Leader of Luton Council, added: ‘I would like to thank Cllr Malik for his service as Mayor of Luton. He made a mistake which he deeply regrets, and I know he and his family are really hurting right now. Prior to this he had been an excellent ambassador for the town both locally and nationally, raising a lot of money for charity during the process. What has happened is unfortunate, and I think it is right for him to step down at this time, but it’s important to recognise the fantastic contribution he has made to Luton.’

The council has received a number of complaints about the three councillors who admitted to attending the function.

The complaints will be addressed through the Council’s Standards Process, in line with legislation.

ASK TONY: Bitcoin con cost me £82,532 but HSBC refuses to refund me

Jose Mourinho hails the ‘spirit’ of his Tottenham players after they...

A day out into the woods with my family (Travel Vlog...