Michigan police are using social media to find new clues – or even a confession – in the cold case murder of a 48-year-old woman that took place in 1978.

All week long, the Troy Police Department has been using its Twitter account to share details about the unsolved murder of Gail Webster, a mother of three and a grandmother, who lived in Troy, Michigan.

Troy Police Sgt. Meghan Lehman, who is investigating the case with two others on the force, told The Oakland Press that the department has as many as 20 unsolved murder cases dating back to the 1960s, but Gail’s case was ‘really sad, really unusual.’

She said there was a large amount of evidence collected and that ‘It just stood out as an odd case.’ 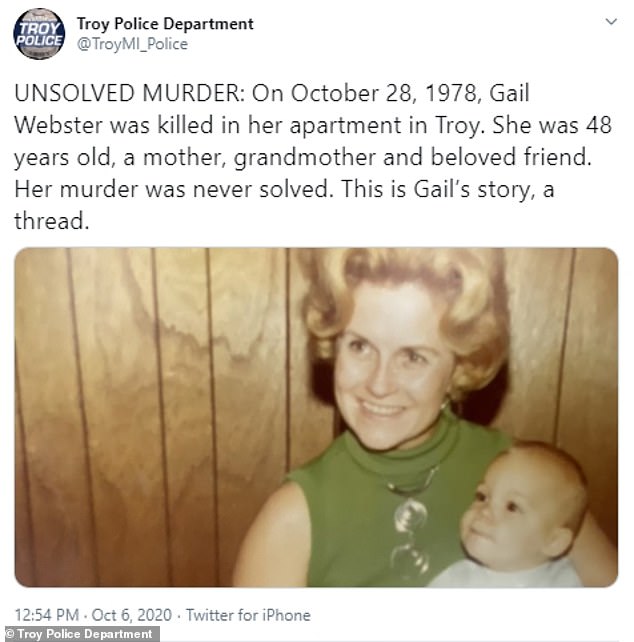 Michigan’s Troy Police Department used its Twitter account to highlight the 1978 cold case murder of Gail Webster, 48 (pictured), who was bludgeoned to death in her apartment 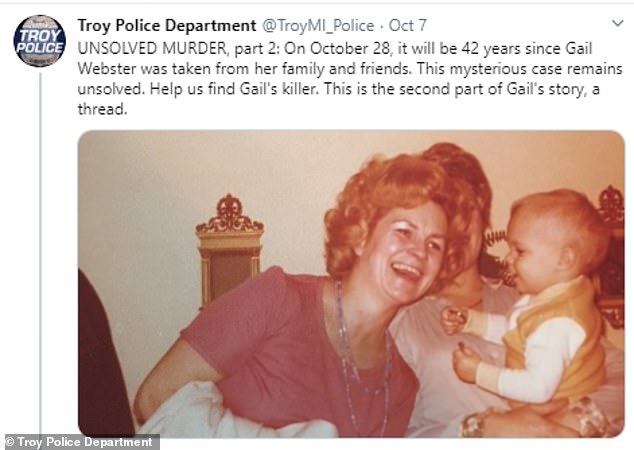 In a series of tweets over three days, police revealed dozens of facts, photos and information about Webster’s case, gleaned from the original 1978 investigation

‘We would really like to do right by this family,’ she said, adding that ‘Having this go unsolved for so many years is terrible.’

In a series of threaded tweets beginning October 6, police revealed dozens of facts, clues and photos about Webster’s murder, which occurred nearly 42 years ago, on October 28, 1978 in her apartment.

‘Her killer was never caught. Her family never got answers,’ Troy police tweeted, noting that they were releasing ‘details of Gail’s murder in the pursuit of new information and justice for Gail.’

Police have taken the step of bringing attention to the case via social media in hopes that they might be able to find a new lead through the public.

‘Sometimes, the guilty are just done holding secrets. Or maybe there could be a deathbed confession,’ Lehman told the newspaper, adding that ‘This is the time to do it.’ 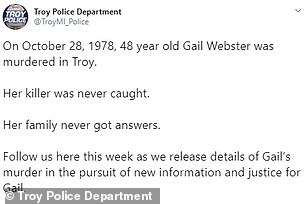 Troy police started tweeting about Gail’s case on October 6, hoping to attract attention to it 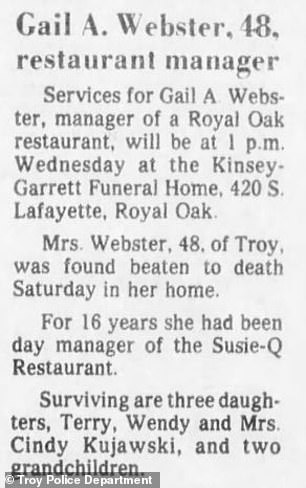 A newspaper clipping about Gail’s death

In the tweets, police said that the day of her murder, Gail had gone to work at Suzie-Q’s, a popular restaurant she’d managed for 16 years, in Royal Oak, Michigan. She ate dinner there before returning that night to the apartment she shared with two of her three daughters, Terry, Wendy and Cindy.

The next morning, on October 29, Gail’s 25-year-old daughter, Terry, arrived at the apartment at 5.55am and found her mother, on the floor, bludgeoned to death with a ‘blunt object.’

Troy detectives and ‘other area agencies’ processed the crime scene. They found that there was no forced entry into her apartment, nothing was stolen and there were no signs that she had had a guest over that night.

Although she lived with Terry and Wendy, neither had been home that night.

Gail’s apartment was described as being located in a newer, ‘upscale’ apartment complex that still stands today.

‘It was and is not a “high crime area,”‘ police tweeted.

During the initial investigation, police believed that ‘Gail was surprised by the killer or killers.’

Gail didn’t have any history of being involved with criminal or illicit activity and she was ‘described as a friendly and well-liked woman,’ according to Troy police.

Authorities focused on Gail’s boyfriend, former boyfriend and ex-husband during the investigation, but ultimately found no clear motive for any of them to kill her. In addition, they were all ‘cleared via polygraph or other means.’ 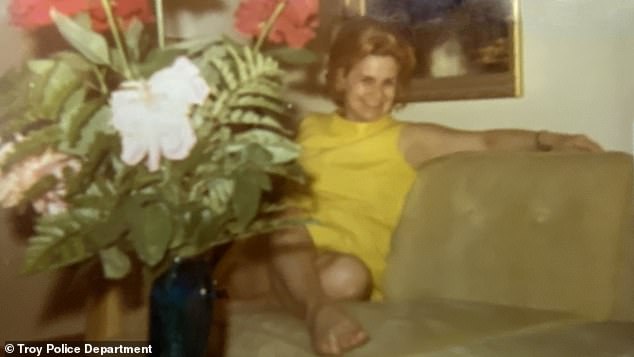 Police said they found no signs of forced entry or that anything had been stolen from Gail’s (pictured) apartment. They also didn’t find evidence that she’d had a guest that night 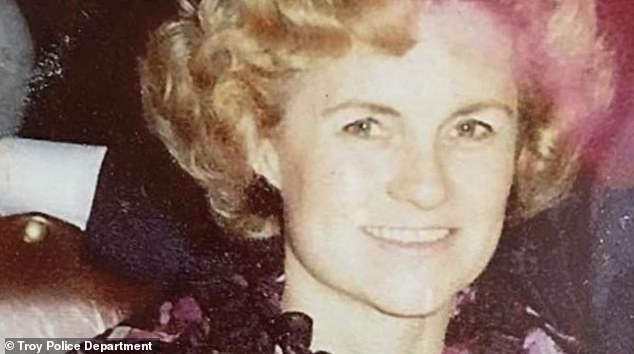 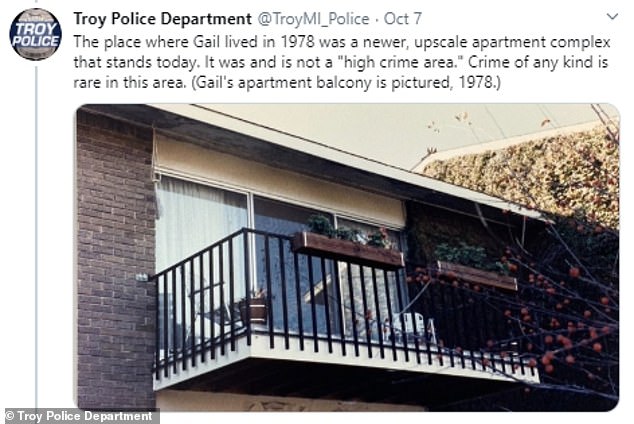 As part of their appeal for information, police tweeted out photos from Gail’s case file 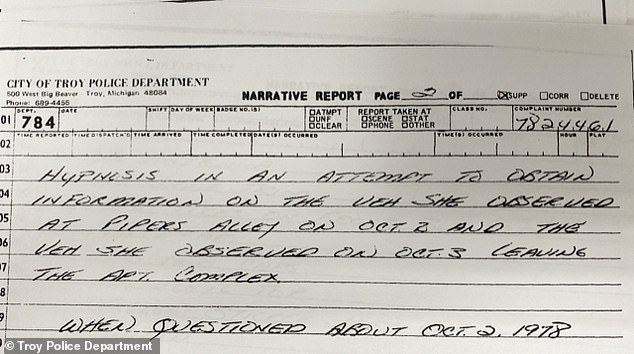 Police also tweeted out documents relating to the original investigation, including this report about an ‘suspicious’ incident that had occurred about a month before Gail was killed

Police noted that a ‘suspicious incident’ had taken place just three weeks prior to Gail’s murder.

On October 2, Terry said that she had gone to ‘hotspot’ Piper’s Alley. While she was at the bar, her apartment keys – to the home she shared with her mother – and a single blank check were stolen out of her car.

That same night, while Terry was still at Piper’s Alley, Gail heard someone ‘jostling’ her door, but when she yelled at the person, they fled. The identity of the person at the door was never uncovered.

Terry told police that while she was at Piper’s Alley that night, she saw two white men, ages 20 to 25 years old, in a  ‘suspicious vehicle’ in the bar’s parking lot.

‘The vehicle was described as a 1968 to 1970 Pontiac Tempest or Chevy, beat up and rusted, blue/green in color,’ police tweeted. 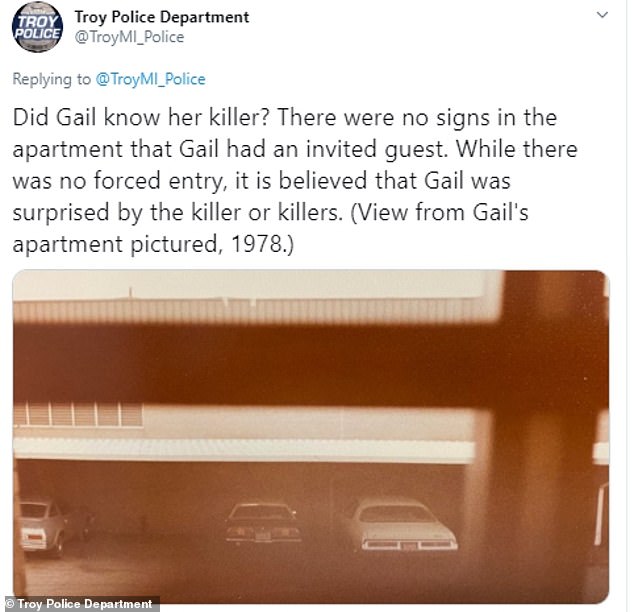 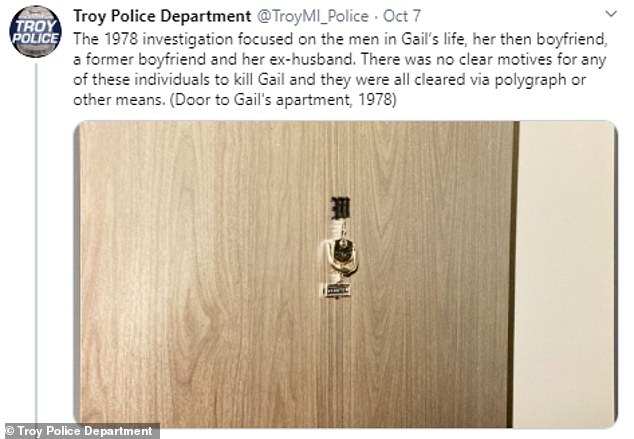 A month before she died, Gail heard someone ‘jostling’ her apartment’s front door (pictured). This incident occurred the night the apartment keys were stolen from her daughter’s car

According to a snippet of the original police report that Troy police tweeted out, Terry told police that she saw the same – or a very similar – car leaving her home apartment complex, on October 3.

She noted that the driver had blond hair. Police used hypnosis on Terry – a common technique at the time – to confirm the information.

Five days after Gail’s murder, police received a tip about a car seen in the area about 40 minutes prior to when Terry found Gail’s body.

The tipster said the car was a 1968 to 1970 dark blue Pontiac or Chevy that was ‘dirty with some body damage’ – similar to the car Terry had described seeing nearly a month prior to her mother’s death.

In this instance, the driver was said to be a white male about 25 years old, wearing an ‘Army jacket.’ He was described as being about six-feet-tall and 160 pounds, with curly, black hair.

Nobody was ever arrested in connection with Gail’s murder.

Her body was exhumed in 1995, following advances in DNA analysis, and a second autopsy was done, but the efforts didn’t lead to a new break in the case, according to the Oakland Press.

Now, police are hoping that advances in investigative techniques – including further advances in DNA analysis – will be able to help them catch Gail’s killer.

Lehman told the Detroit Free Press that she’d stumbled across Gail’s murder file and thought that they might be able to ‘make some progress’ after so many years had passed since it was last looked into.

She then reached out to Gail’s three daughters, now in their 60s, earlier in the fall.

Although they said they were surprised to hear from Lehman out of the blue, they are still seeking justice for their mother.

‘There’s an answer out there,’ Terry Webster-King, now 67, told the Oakland Press.

Gail’s youngest daughter, Wendy Razlog, 63, said that ‘I just want to bring closure to this. It won’t stop the pain, but it will make it a lot better.’

It’s a sentiment shared by Gail’s oldest daughter, Cindy Kujawski, 68, who said the family is ‘just trying to get peace of mind at this point.’

Anyone with information about Gail Webster’s death is asked to call the Troy Police Department at (248) 524-3777.