Bosses at Sports Direct have said all stores will remain open because selling sporting and fitness equipment makes the company a vital asset during a national shutdown.

Mike Ashley’s Frasers Group, which includes Sports Direct and Evans Cycles, wrote to all workers within 30 minutes of Prime Minister Boris Johnson’s decision to shut down all non-essential retailers.

Finance chief Chris Wootton wrote: ‘We stock a huge range of sports equipment designed for exercising at home… indeed home fitness is the number one trending topic on social media after coronavirus itself. 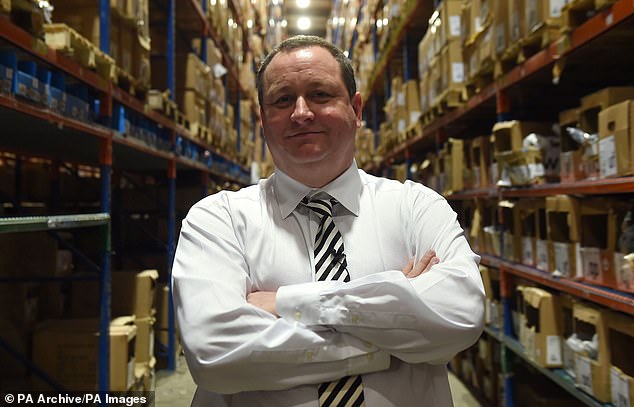 ‘Against the backdrop of the closure of gyms the demand for these types of products has increased exponentially as the population looks to maintain a healthy lifestyle.

‘Consequently, we are uniquely well placed to help keep the UK as fit and healthy as possible during this crisis and thus our Sports Direct and Evans Cycles stores will remain open where possible to allow us to do this (in accordance with the Government’s current social distancing guidance).

‘There is no one else that has the range of product and range of stores to make this reasonably accessible for the whole population.’

The finance chief, who sits on the board alongside chief executive and majority owner Mr Ashley, signed off: ‘Thanks for your incredible efforts during this time.’

The PM said restrictions would be tightened up so only essential journeys should be made by key workers.

He also said people could leave home for exercise, but only while maintaining social distancing.

Although Government advice says that retail outlets should shut down, it makes exceptions for ‘health shops’ and ‘bicycle shops’.

Next will close every one of its 700 UK stores from 6pm tonight due to the coronavirus outbreak.

The high street fashion retailer announced that it will temporarily shut up shop until further notice.

A spokesperson said on Twitter: ‘We have made the decision to close our stores from today, Monday 23rd March at 6pm, until further notice. 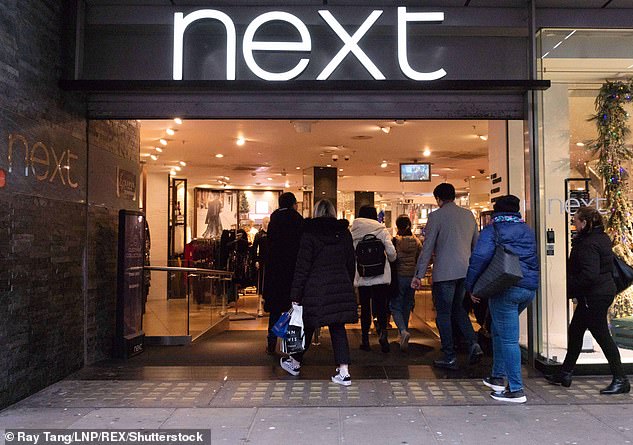 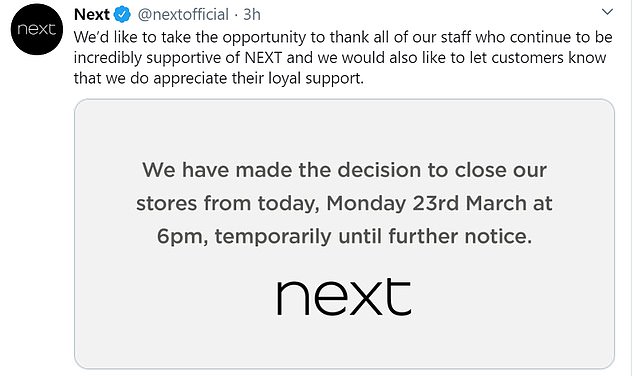 The shops closing due to the coronavirus pandemic

‘We’d like to take the opportunity to thank all of our staff who continue to be incredibly supportive of Next and we would also like to let customers know that we do appreciate their loyal support.’

Shortly afterwards, restaurant Wagamama revealed it will close all of its eateries from 9pm tonight.

Many chains said they would be temporarily shutting stores in the UK, as retailers all over the country begin to deal with the fall out from the illness that has so far killed 335 people, with over 5,857 cases having been confirmed.

Many people across the UK will be laid off work due to the virus and chancellor Rishi Sunak is preparing a fresh coronavirus economic bailout to protect the UK’s five million self-employed workers.

He had announced on Friday that the Government would cover 80 per cent of employers’ wage bills in a bid to stop mass lay-offs.

On Sunday Timpson announced that all 2,150 of its stores – including its cobblers and locksmiths, and Johnsons – will ‘go into hibernation’ at 5pm tomorrow.  CEO James Timpson confirmed that staff will remain on full pay.

This is while Ann Summers will close all stores and will pay staff their full salaries until next month.

And high street giant John Lewis decided to close all 50 of its stores from close of business tonight for the first time in its 155-year history. Waitrose will however remain open.

HMV also said it would be temporarily closing its stores for trade from the end of Sunday, although its online business would continue.

Topshop employees were laid off after the Arcadia Group closed its 300 UK stores an hour before the Government announced its coronavirus job retention plan.

The group owned by billionaire Philip Green said in an emailed statement: ‘In line with many other retailers, the Group has made the difficult decision to close until further notice all of our stores from 4pm this afternoon.’

Scientists and medics say the vast majority of those killed by Covid-19, the illness created by the Wuhan virus, are elderly with ‘underlying conditions’.

Those ‘conditions’ include cardiovascular and chronic respiratory diseases, hypertension, diabetes, and cancer sufferers.

Despite this, it was yesterday reported that an 18-year-old man in the UK had died from the virus.

was said to have underlying health conditions but the update makes him the youngest patient yet.

Sticking to three good habits ‘can add 10 years of disease-free...