A woman who had a long-term affair with a wealthy Russian businessman has won a family court fight over a £10million London apartment.

The businessman, who has three children with the woman, wanted to sell the apartment and said she and their offspring could move to a cheaper home.

The woman, who is also Russian, wanted to stay and now a judge has ruled in her favour. 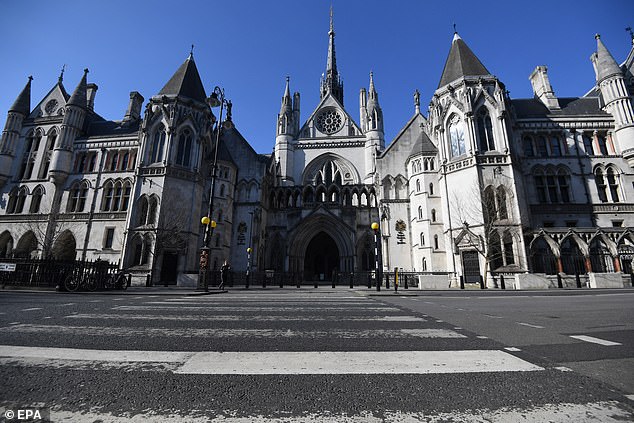 Mr Justice Williams had analysed the dispute at a private family court hearing at the Royal Courts of Justice in London in January, and has outlined his decision in a written ruling published online.

He said the people involved could not be identified in media reports.

The judge said the woman and man were both in their 50s and had met about 25 years ago in Russia, when the man was married.

She had been working as a finance director at a factory he owned.

Mr Justice Williams, who is based in the Family Division of the High Court in London, said they had lived together intermittently for a 20-year period.

The man had married three other women during that time and divorced two of them, the judge added.

The man had three children from other relationships.

The woman and her children had moved to England a decade ago and the man had subsequently bought the ‘exclusive’ London apartment for them to live in. They moved in about six years ago

Mr Justice Williams said the man continued to live in Russia and visited the woman and children about four times a year.

‘The parties have cohabited intermittently over the last two decades,’ said the judge, in his ruling.

‘Their relationship has not been conventional.’

The judge said the man had a ‘willingness to deceive those closest to him’ and an ‘ability to cover his tracks’.

He said the woman had, for the most part, been an ‘honest and reliable’ witness.

She was not ‘motivated by greed or anger’, he said.

He said the woman and children should not have to move because the apartment was their ‘family home’ and had been for about six years.

Only six per cent of all adults can identify these 10 paintings – so how well do you fare?

Only six per cent of all adults can identify these 10...

Love Island Australia cast and villa revealed ahead of its UK...