People have been forced to queue outside banks today as they obey social distancing rules put in place to stop the spread of coronavirus.

Photos taken up and down the country show people waiting in lines outside branches of Natwest, Lloyds TSB, Halifax and Barclays today.

While many are happy to adhere to guidelines urging people to stay apart, others have questioned why banks are not letting elderly and vulnerable customers inside first. 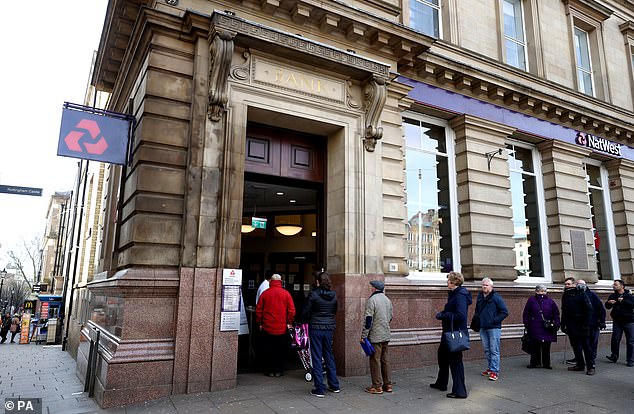 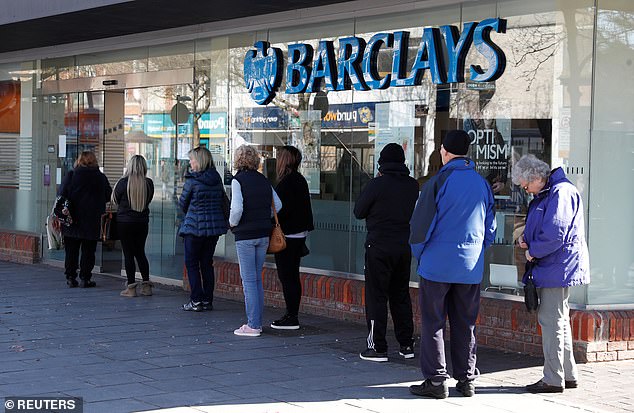 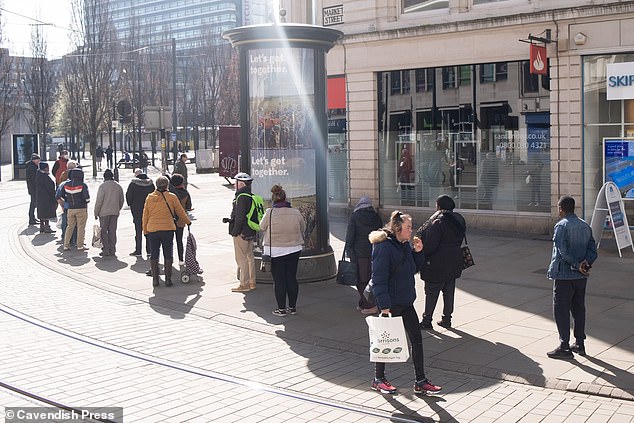 Queues outside a Santander Bank on Market Street in Manchester today

This comes as banks are struggling to cope with a flood of calls from frantic families desperate to freeze their mortgage payments.

Anxious borrowers are being forced to wait hours to speak to someone, with one angry homeowner complaining of a ten-hour delay when trying to get through to Santander.

Many lenders are now asking borrowers to submit applications online to free up their helplines, or to only call if they are vulnerable or facing immediate difficulty.

Customers have taken to social media to share their frustration at watching elderly members of the public standing outside banks.

Others have raised fears this could flout the social distancing rules unless people are given clear guidance on where to stand.

Lloyds Bank, Halifax and the Bank of Scotland – which are all part of the Lloyds Banking Group, said queues outside branches were the result of social distancing.

A spokesman for the group said there had not been an increase in the number of customers visiting branches, but the queues were a result of people keeping a safe distance, ‘which is the right thing to do to protect everyone.’

Posters outside branches are asking customers to stand two metres apart, while staff members will be stewarding queues. 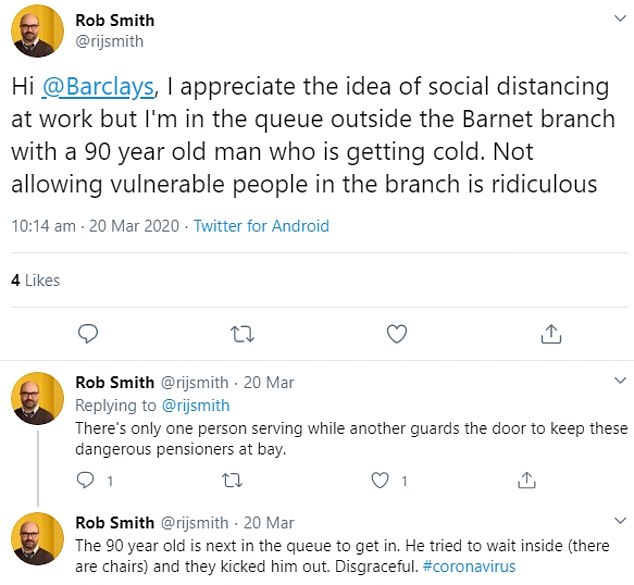 The spokesman added: ‘As the impact of coronavirus is felt across the UK, our priority is to serve customers and where possible keep our branches open.

‘We continue to follow UK Government guidance to ensure the wellbeing of both our colleagues and customers. All our branches now display clear and prominent notices explaining the need to adhere to social distancing.

‘We know that having fewer colleagues available may mean customers need to wait longer, or that queues may appear longer due to social distancing rules.

‘In some cases, in smaller branches or where our banking hall is busy, customers might need to wait outside a branch in order to keep to safe distances inside. These are the right steps to take to keep each other safe.’ 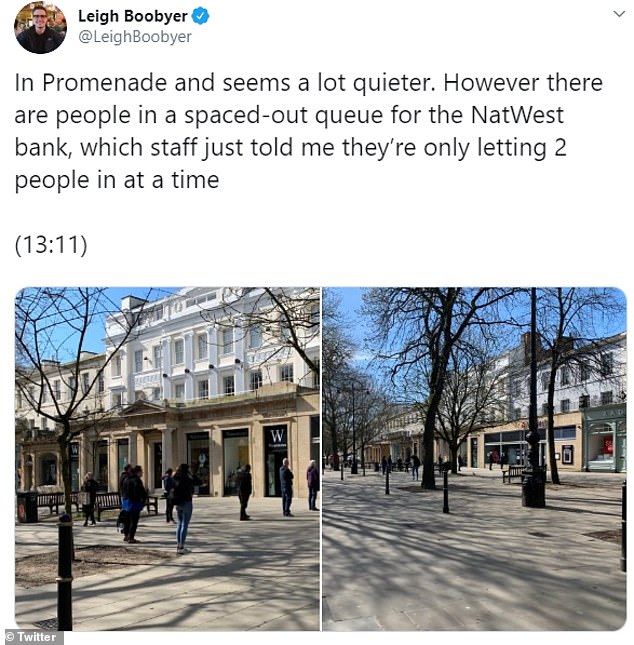 The calls to banks in recent days were triggered by Chancellor Rishi Sunak’s announcement that homeowners in financial difficulty as a result of the coronavirus pandemic will be offered a three-month mortgage break, or ‘payment holiday’.

Borrowers who decide to take a break will still be charged interest on their mortgage over the three-month period, but the holiday should give them breathing space to get their finances in order.

Martyn James, of complaints website Resolver, said: ‘While the extraordinary impact of the coronavirus is unprecedented, big businesses are supposed to have crisis plans in place for worst-case scenarios like this.

Businessman Tim White spent nine hours on the phone to NatWest to ask for a payment holiday.

He joined the queue at 9am and was cut off by the bank at 6pm when the call centre closed for the day.

Mr White, 52, said: ‘I had to have the phone attached to me all day on speaker phone. It was hard getting anything done and I couldn’t make or receive any calls from anyone else.’

He then went into his local branch but they couldn’t help and told him to try the phone number again.

When Mr White contacted the bank via Twitter, he was told to use an email address.

Father-of-two Mr White, from West Yorkshire, owns a media consultancy and agency. Part of his business is supplying sports commentators for events, but with most sport cancelled, his income has started to dry up.

Mr White’s next mortgage payment is due on April 1.

‘If we get the holiday it gives us peace of mind,’ he said.

‘The mortgage payment holiday is a vital lifeline for millions and should not be complicated to implement – so it’s a real concern that some lenders are failing their customers by not having a plan in place.’

The City watchdog last week issued new official guidance spelling out what banks and building societies must do to help their customers.

‘In particular, we are making it clear that no responsible lender should be considering repossession as an appropriate measure at this time.’

The regulator added that banks must not charge customers any additional fees for taking a payment holiday and said the break should not damage people’s credit scores.

A Santander spokesman said: ‘Only customers who know they’re going to miss their next monthly payment due should call at this time.’

The bank is also asking customers to use social media or its online chat service to get in touch.

Many high street banks have created special payment holiday request forms which are available on their websites.

Santander, Halifax and Lloyds Bank, NatWest and Nationwide borrowers can all ask for a payment break online without needing to telephone their bank.

Families who have mortgages with Barclays and HSBC still need to speak to an adviser on the phone to ask for the three-month freeze.

Nationwide said it was aiming to respond to borrowers who have filled out the online form within five to seven working days.

Halifax said it will respond to borrowers who apply online within two to three working days by text message to let them know if their application has been accepted.

HSBC does not yet have an automatic payment holiday process in place but said if customers called the bank and left their details it will respond when a system was up and running.

HSBC said: ‘Coronavirus is having an ever-growing impact on our colleagues and it is becoming increasingly difficult to maintain service levels through our contact centres and branches.’