A Navy SEAL has been honoured for rescuing three children who were pulled out to sea in a rip current as their father drowned trying to save them.

An East Coast-based Navy SEAL – whose identity has not been revealed due to operational security concerns – was awarded with a Navy and Marine Corps Medal, the highest non-combat decoration awarded for heroism.

‘It was an honor to recognize the actions of one our teammates,’ said Rear Adm. H. W. Howard III, commander, Naval Special Warfare Command.

‘His problem solving, grit, and humility is powerful testimony to our standard for character and service that we – the men and women of Naval Special Warfare – aspire to serve each day.’

The Navy SEAL was visiting Atlantic Beach in Morehead, North Carolina on memorial day weekend in 2019 where he spotted three boys playing in the water further out than anyone else.

He was already on alert having heard that six people had drowned at the same beach so far that year – more than during the whole of 2018. 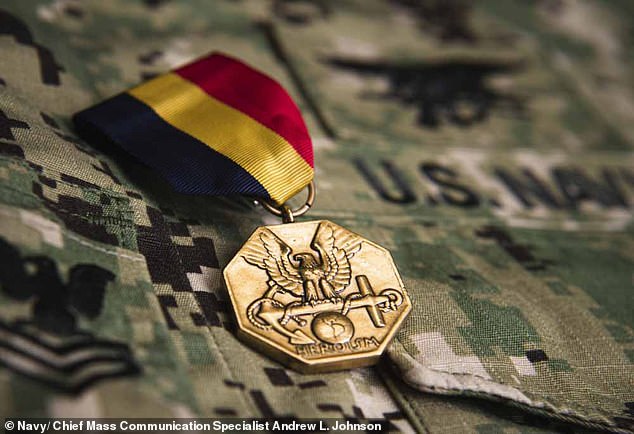 A Navy SEAL has been honoured with a Navy and Marine Corps Medal, the highest non-combat decoration awarded for heroism, for saving three boys who were pulled out to sea

He and his wife had only narrowly decided in favour of going to the beach that day with their own family, fearing it could be too dangerous.

But when he arrived, he had already sensed something was wrong with a group of children playing in the water.

‘These kids stuck out to me because they were playing just a little deeper than any of the other kids,’ the SEAL said, recalling the events that day.

‘There weren’t lifeguards on the beach, and the red flag for rip current was up so not many people were in the water, and if they were, they were only knee deep, so they had my attention.’

As the family settled on the beach, the SEAL looked back towards the boys and saw them all dive into a wave, but once they came back to the surface, they began to drift out sea.

Sensing trouble, he stood up and started to walk towards the water. ‘My first thought was, is this happening after we talked about it for the last two days?’ he said.

‘On top of that, I’ve never seen anyone drown. I’ve heard stories, I have a lot of training when it comes to life-saving techniques, but I had never seen it in person.’

As he got closer to the water, the boys were slowly drifting away, but they weren’t panicking, or splashing and screaming, but the SEAL knew they were in trouble. He grabbed a youth sized boogie board and walked to the shoreline, still watching the children.

‘The kids had been in the water anywhere from 10 to 30 seconds, and that’s when I saw their father bolt into the water,’ he said. ‘That’s when I knew that the situation was bad.’

As the SEAL continued towards the water – where he could hear the father screaming for help –  he got the attention of his family and told them to call 911.

He swam out to where the boys and their father were, and found that the father was treading water holding up his two children while trying to keep their heads above water.

The SEAL gave the father the boogie board for the children, and saw that the third child had drifted 25 yards away. The father pointed to him, and the SEAL started swimming to the third boy’s aid as hard as he could. 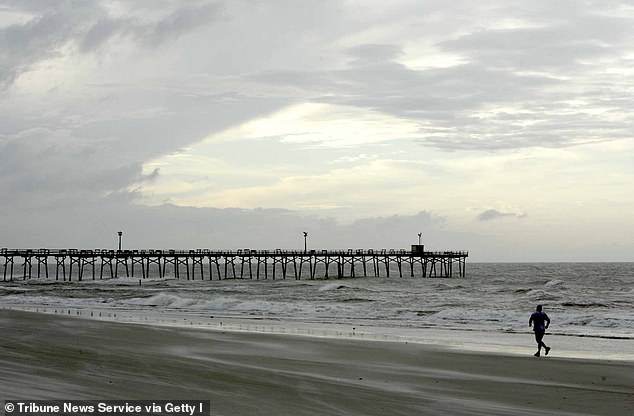 Atlantic Beach, North Carolina (pictured) had already seen six deaths in 2019 – more than in all of 2018 – when the unnamed Navy SEAL was forced into action to save three boys

‘He was incredibly still because he was hypoxic. I put him in the rescue position and began to swim to shore.’ Hypoxia is a physical condition resulting from the deprivation of oxygen.

The SEAL swam hard with the boy despite his fear that he might not reach shore himself as the rip current worked against him. 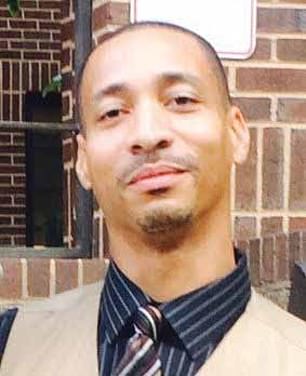 Ernest Foster II, (pictured) a 38-year-old school teacher, died a hero trying to save his children, the Navy SEAL said

‘I was pretty smoked by that point,’ said the SEAL. ‘I was drained. I knew even if I couldn’t make it back, rescue crews would be showing up soon, so I just put my head down and kept going.’

‘Everything about rip currents, and surf zones I learned in BUD/S [the SEAL assessment, selection, and training program],’ said the SEAL. ‘I was reminded of the seven-mile swim we do in BUD/S, and I thought to myself, if I have to I can do this all day.’

After ten minutes of swimming, the SEAL escaped the rip current where he was met by a Marine who helped in bringing him back to shore, and after leaving the child with the Marine, he turned back to the father and boys – now 125 yards from shore.

‘I’m not sure how long it took me to get out there. I know it took longer than I thought because of my position. The whole time I could see all three of them,’ said the SEAL.

‘As I passed through the surf zone, I looked up and couldn’t see the dad anymore. I got close to the boys, and I saw the dad for a split second just below the surface, and then I lost him.’

The SEAL was able to get the two boys onto the boogie board, at which point he asked them where their father was. One boy replied saying he was gone, and despite his best efforts, the SEAL couldn’t find him. 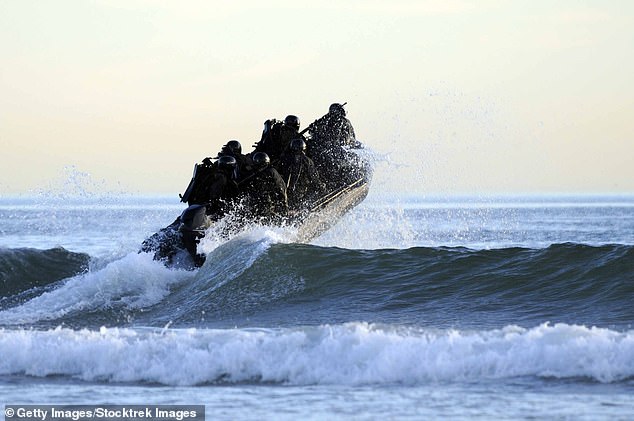 Less than a minute later, rescue swimmers and a jet ski arrived, and the SEAL told the team where the last place he saw the father was, and took the two boys back to shore as the rescue team tried to find their father.

In the days after, the SEAL said that he saw reports coming out of the incident based on eye witness accounts from people who did not see the full picture.

‘I was the only one who saw everything from start to finish,’ said the SEAL. ‘The reports painted him [the father] as someone who was swimming in a red flag rip current with his kids.

‘People on social media just trashed this poor guy and all reports failed to mention his true actions that day. A hero who died saving his family.’

The SEAL contacted Foster’s mother to give his first-hand account of what actually happened. ‘I was able to set the record straight and was asked to speak at his funeral.

‘We were able to make his funeral a celebration of his bravery and sacrifice because he was a hero. The man died saving his children; he was a hero.’

To this day, the SEAL is still in contact with Foster’s mother.