By Tim Stickings For Mailonline

A news agency has apologised to Prince Harry and Meghan Markle after drones were allegedly used to take pictures of their son Archie.

The couple launched legal action in Los Angeles in July claiming an individual had photographed Archie, then 14 months old, at their home during lockdown.

The Duke and Duchess of Sussex claimed the pictures were an invasion of privacy.

On Thursday, their lawyer Michael Kump said the agency responsible, X17, had apologised and agreed to pay a portion of their legal fees – settling the legal case.

X17 has also agreed to turn over the photos to the family, destroy any copies in its archives and never again sell photos of Harry and Meghan taken by drone, zoom or telephoto lenses ‘in any private residence or the surrounding private grounds’. 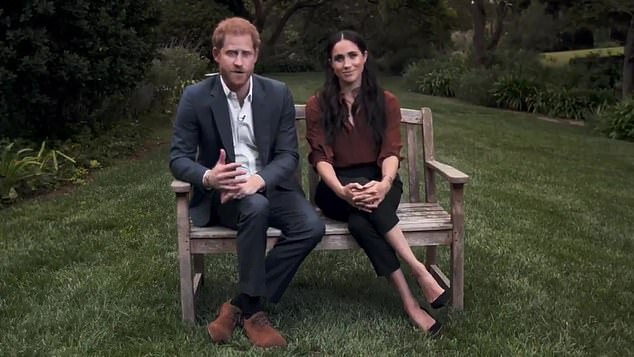 Harry and Meghan, pictured in a video they filmed at their California home last month, launched a lawsuit earlier this year claiming violations of privacy

‘We apologise to the Duke and Duchess of Sussex and their son for the distress we have caused,’ X17 said in a statement. ‘We were wrong to offer these photographs and commit to not doing so again.’

Court documents from the Los Angeles County Superior Court said that the photos were of Archie and Meghan’s mother Doria Ragland.

Drones were flown 20ft above the house as often as three times a day, according to Harry and Meghan’s lawsuit, while some of the pictures of Archie were sold.

Helicopters also flew the residence as early as 5.30am and as late as 7pm, the legal papers say, which had the effect of ‘waking neighbours and their son, day after day’.

Holes were also cut into the security fence by photographers, the lawsuit stated.

The couple’s lawyer said: ‘Over the summer, the Duke and Duchess of Sussex took action against intrusive and illegal paparazzi photos taken of their family at a private residence.

‘Today, the agency responsible for those photos – X17 – apologised and agreed to a permanent injunction and reimbursement of a portion of legal fees.

‘This is a successful outcome. All families have a right, protected by law, to feel safe and secure at home.’ 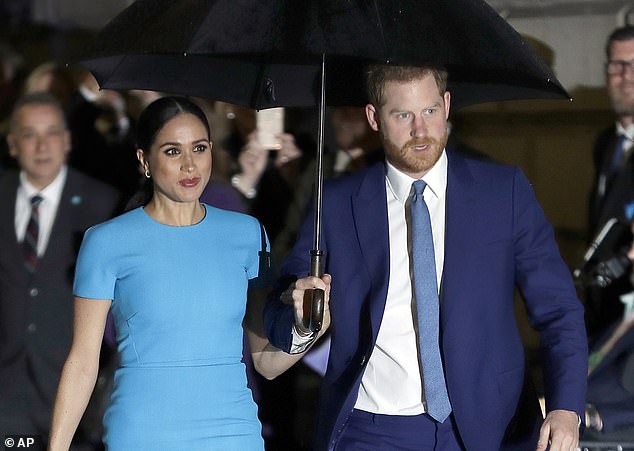 The Duke and Duchess of Sussex at an event in London in March, shortly before their departure from royal duties

In their lawsuit the Duke and Duchess had claimed they lived ‘unmolested’ in North Saanich, Canada, for six weeks before paparazzi started to descend on their home.

Their subsequent move to Los Angeles to a ‘gated community at the generosity of a friend’ – entertainment tycoon Tyler Perry – was similarly exposed, the couple said.

The lawsuit cites California’s privacy laws, which make photographing or filming anyone in their homes by use of drone or telephoto lenses illegal.

Because Harry and Meghan do not know who took the pictures, the lawsuit initially targeted unnamed defendants, which allowed the couple to pursue anyone selling the images.

Harry and Meghan say they ‘seek no special treatment whatsoever’ and only want the right to privacy.

The couple announced their departure from royal duties in January, saying they wanted to ‘work to become financially independent’.

Since the drone pictures were taken, the couple have bought their own California home and moved there.

They have also repaid the £2.4million cost of renovating Frogmore Cottage, their UK home, which had been refurbished at public expense.

Family risk their lives to line up for group selfie on...

How digital-savvy students are raking in thousands without even leaving their...

‘World’s tiniest boat’ small enough sail down the inside of a...

Sports: Klopp names Liverpool trio who can step in at centre-back...