Two GPs ready to take on the fight against coronavirus have pushed their wedding forward so they can help out sooner.

Former GP and mental health expert Dominique Thompson is heading back to active duty with the NHS after the government asked for former health workers to return to the front line.

But it meant her wedding with Simon Bradley, GP and chairman of Avon Local Medical Committee in Bristol, had to be moved forward by three months.

The couple married after 13 years together in front of just four guests. Dominique’s parents could not attend as they’re both over 70. 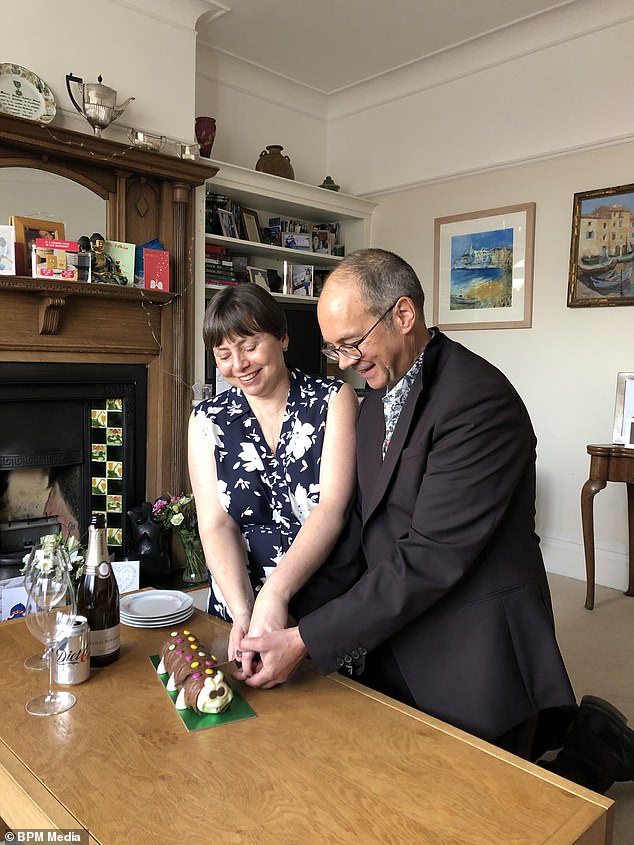 Dominique and Simon’s friends doubled-up as photographers and witnesses to the wedding, which was arranged with less than week’s notice at Bristol Register Office. Their wedding cake was a Colin the Caterpillar cake bought from a nearby M&S 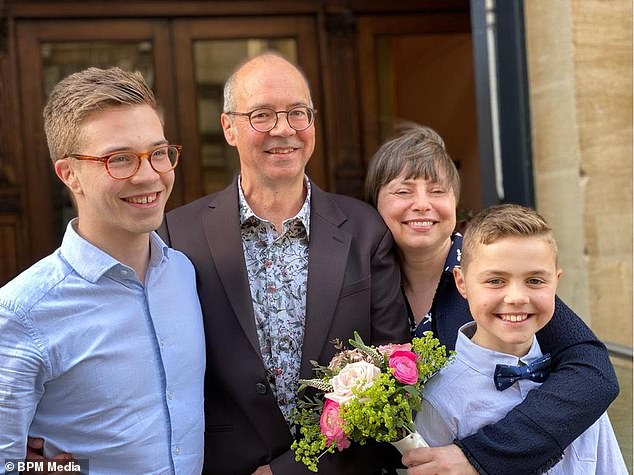 With most of their family self-isolating, their son Jack, 10, and step-son Harry, 26, made up half of their wedding guests. Jack’s bow-tie was one of the few new items bought for the big day

Their wedding cakes was a Colin the Caterpillar, and the newlyweds toasted with a can of diet coke.

Dr Thompson, 49, said: ‘We thought this would be a great year to get married – our little boy was ecstatic.

‘And we were supposed to go to New Zealand in July, but for now the honeymoon involves homeschooling a 10 year old.

‘We just wanted to be married to each other, and we knew Jack would be devastated if we cancelled.

‘We had to think – what will make me, Simon and the family smile?

‘Life is for living, and we have got to focus on small, positive acts.

‘Now we are doing what we can to help – trying to help the people we would normally be helping.’

Simon, 63, added: ‘We were really lucky – we could see things running out of control.

‘But it’s really simple to get some of that control back.

‘The day was wonderful and lovely.’

Dominique walked down the aisle at Bristol Register Office on Sunday, the pair being one of the first couples to wed under new legislation limiting the number of guests to five. 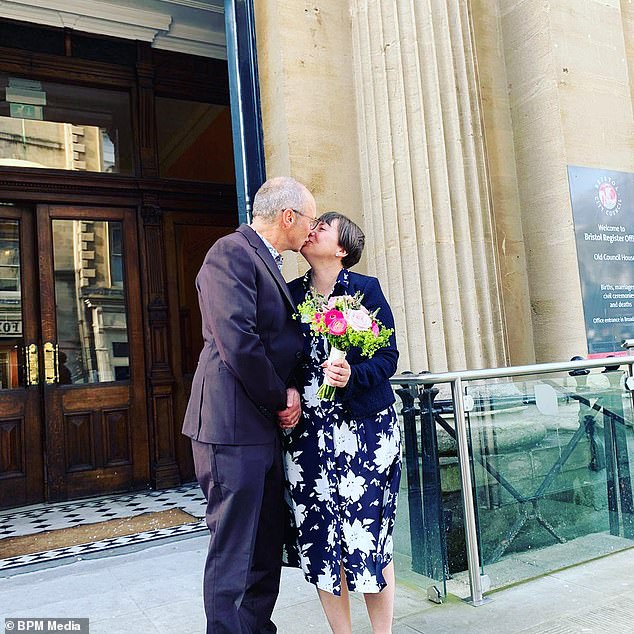 Just married: Dominique and Simon outside Bristol Register Office on Sunday, where, after 13 years together, they became husband and wife. Now the two NHS workers are preparing to join the fight against the coronavirus pandemic

Simon proposed on New Years eve, 13 years after the pair met on a local medical committee.

At the beginning of March the pair thought their original plans might not be possible, Simon predicting that Dominique would get called out of NHS retirement.

On Monday, March 15 they called the register office who said they had a slot in less than a week.

At this point they still thought their family in Surrey and London would be able to make their ‘micro wedding.’

The pair’s son Jack, 10, and their stepson Henry, 24, were the only family at the celebrations due to their other step-children isolating in London.

The only other guests were friends Jo and Paul, who acted as both witnesses and photographers – always from a distance of six feet.

They had booked the restaurant, Little French, for their original wedding celebrations scheduled for June 13th.

Instead the family-run restaurant provided the ingredients for roast beef with dauphinoise potatoes and champagne for the newlyweds to cook at home.

To ensure people smiled on the day, the pair even had a Colin the Caterpillar cake from the local M&S garage.

The pair both wore outfits they already had – in fact the only piece of wedding attire bought for the day was Jack’s Paul Smith football bow tie.

Dominique is one of 65,000 retired medics who have been called back to action.

Yet to hear what she can do to help, the pair are focusing on what they can do for their family.

Dominique said: ‘We are taking each day at a time, not planning that far in advance.

‘But we made a bright spot in a pretty dark week – it’s those things we can control.’

Lorry driver, 67, who raped drunk stranger, 22, is jailed for only five years