Protests comes in many guises.

Some involve enormous personal risk and sacrifice, like the unidentified Chinese man who stood in front of a column of tanks leaving Tiananmen Square in 1989, the day after Chinese military had suppressed student-led demonstrations by brutal, lethal force.

Or like the willingness of Russian opposition leader Aleksei Navalny to defy Putin’s goons and risk lethal poisoning at any moment.

Others involve rather less courage and rather more gigantic dollops of pathetically hypocritical virtue-signalling.

Reality TV wastrel Kim Kardashian West led the ‘movement’ by posting the following message to her gazillions of followers: ‘I love that I can connect directly with you through Instagram and Facebook,’ she wrote, ‘but I can’t sit by and stay silent while these platforms continue to allow the spreading of hate, propaganda and misinformation – created by groups to sow division and split America apart – only to take steps after people are killed. Misinformation shared on social media has a serious impact on our elections and undermines our democracy. Please join me when I will be ‘freezing’ my Instagram and FB account to tell Facebook to #StopHateForProfit. Link in bio for more info on how to preserve truth.’ 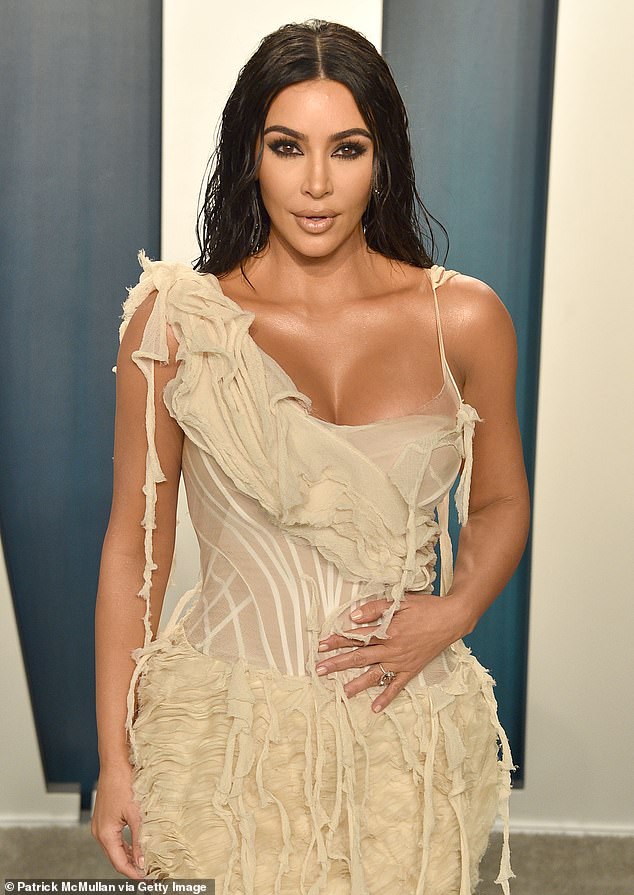 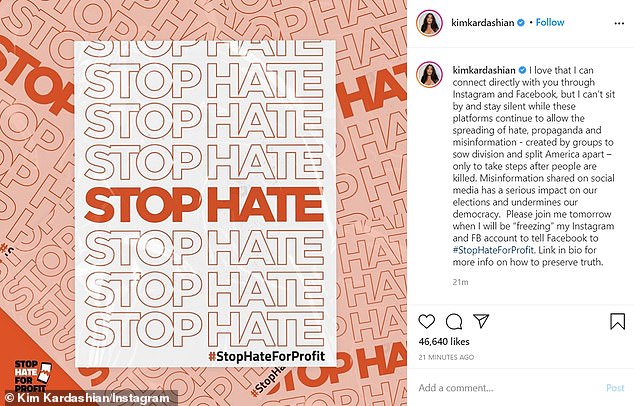 The 39-year-old reality star said that groups take advantage of the platforms to ‘sow division and split America apart’. The effort is a part of the #StopHateForProfit campaign seeking to hold social media companies accountable for hate on their platforms 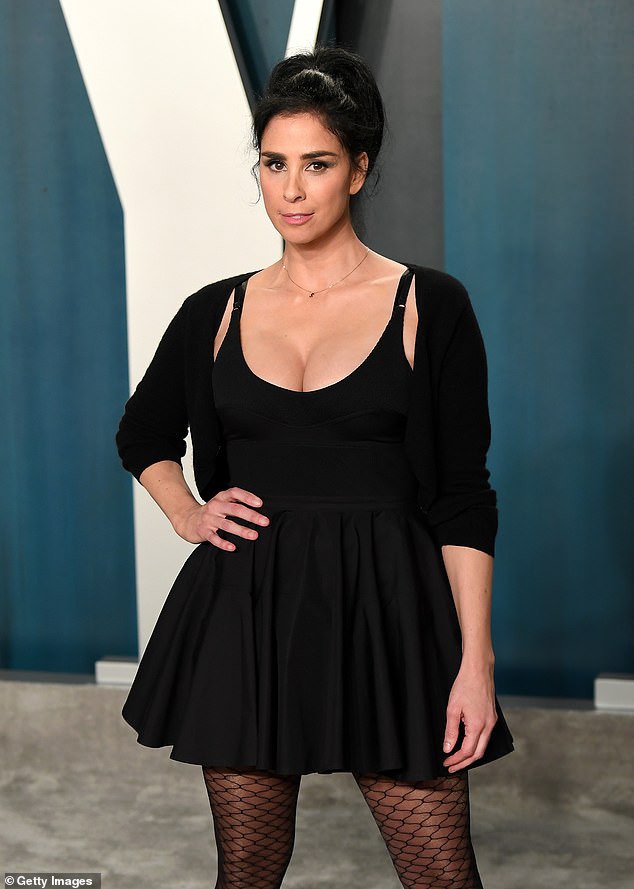 Powerful words, and ones that were quickly embraced by scores of other famous names.

One of them was comedian Sarah Silverman who is also very keen to #StopHateForProfit.

Ms Silverman knows all about spreading hate on social media.

In the past few years she has tweeted that Donald Trump is a ‘pathological nasty pig’ and a ‘c*nty fear monger’, and called his father a ‘racist c*nt.’

When the President mocked former democratic presidential candidate Amy Klouchar for talking about climate change while ‘standing in a virtual blizzard of snow’, Silverman tweeted him directly to say: ‘No point in explaining how mind blowingly stupid this tweet is so I’m just gonna go with F*CK YOU, and also add that you are a smelly p*nis hole with balls that touch water. Eat sh*t, you greedy tw*t.’ 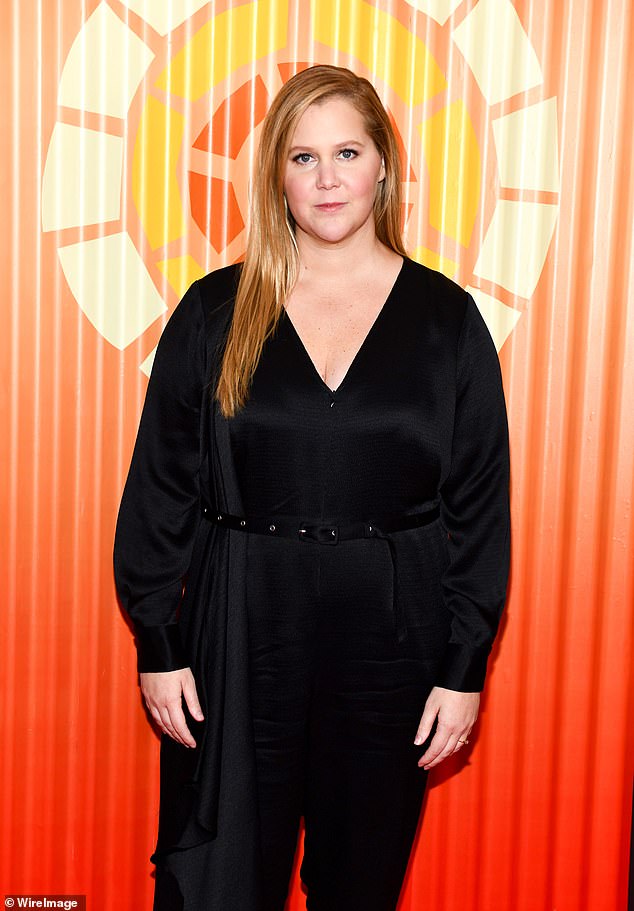 Amy Schumer has also joined the boycott. The woman who once said: ‘I used to date Hispanic guys, but now I prefer consensual’ 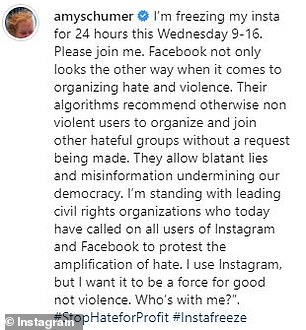 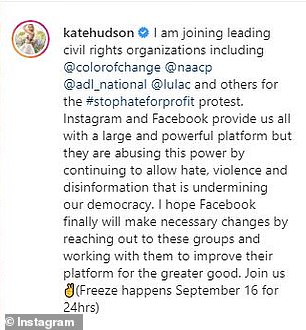 She expanded on her thoughts about Trump’s genitalia after he criticized his predecessor Barack Obama.

‘I’d love to see Trump say any of this sh*t he’s saying about Obama to his face,’ she tweeted. ‘There’s no way he’d have the labs to even do just that. He’s an oozing shriveled p*nis hole of a man.’

‘I don’t mean this in a hateful way,’ she once tweeted, hatefully, ‘but the new bachelorette’s a f*ggot.’

On another occasion she tweeted a photo of herself in blackface with the caption ‘I’m having minstrel cramps.’

And she posted this ‘joke’: ‘I used to go out with a guy who was half black who totally broke up with me because I’m a f*cking loser. I just heard myself say that. I’m such a pessimist. He’s half-white.’

Perhaps the real reason Silverman wants to get rid of ‘hate for profit’ is because she herself is a nasty foul-mouthed homophobic racist? 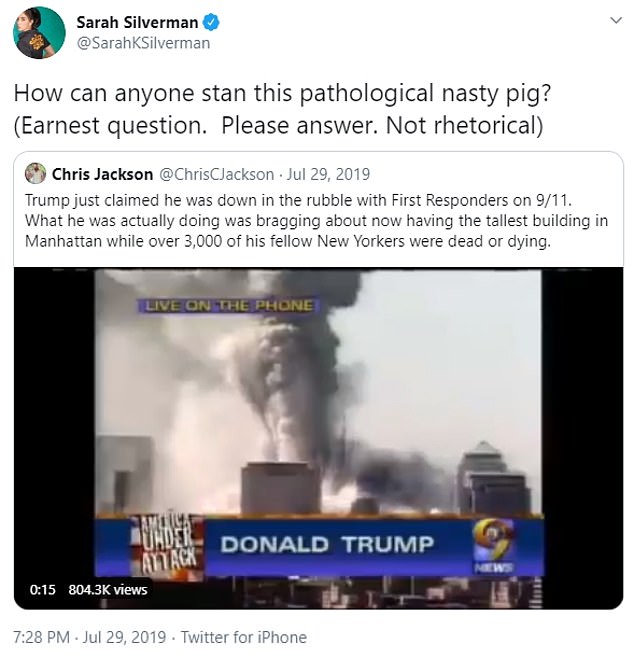 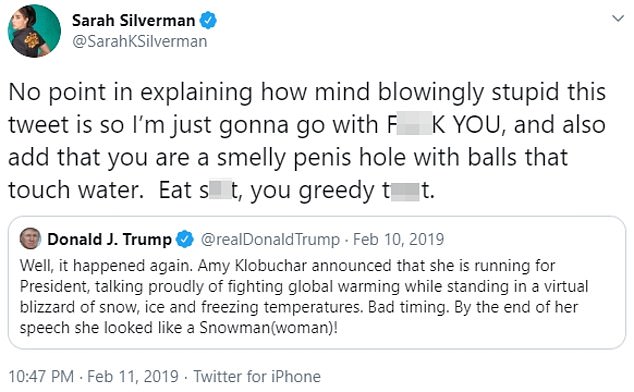 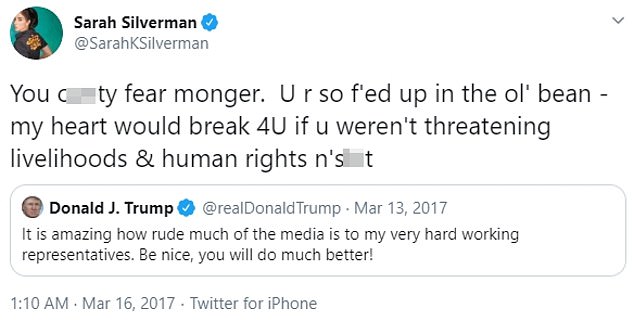 Another of the stars to join the boycott is film director Judd Apatow, who is also very active on social media, and has repeatedly called Trump things like a ‘malignant narcissist’, and a ‘pig’.

Apatow once tweeted – and then deleted after it sparked outrage – footage of left-wing activists rioting violently outside University of California-Berkeley to stop far-right political commentator Milo Yiannopoulos making a speech – and said: ‘This is just the beginning. When will all the fools who are still supporting Trump realize what is at stake?’

Hmmn, how does that open call for violence sit with wanting to stop violence?

Apatow also objected to People magazine, one of the world’s least offensive publications, from running a positive story about Trump’s family, raging on Twitter: ‘F*ck People magazine. How disgusting. Selling their soul. Sell those mags! F*ck your employees.’

Movie star Amy Schumer has also joined the boycott. The woman who once said: ‘I used to date Hispanic guys, but now I prefer consensual.’

And who tweeted: ‘Enjoy skyfall f-gs. I’m bout to get knee deep in Helen Hunt #thesessions.’

As for Ms Kardashian West, perhaps she should focus on the constant stream of hateful guff that spews from the unhinged Twitter mouth of her husband Kanye West (he was at it again all last night) before lecturing the rest of us?

Even by the standards of celebrity virtue-signalling during this pandemic-ridden year, the new Facebook/Instagram boycott seems particularly pointless and self-serving. 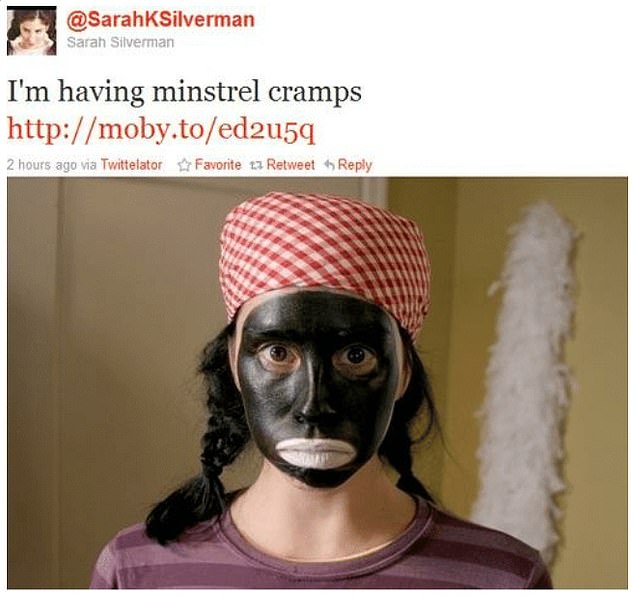 These valiant crusading heroes are all doing this for … one day.

Then the fearless campaigners will go straight back to aggressively and cynically using Facebook and Instagram to boost their own profiles and profits, with many of them also going back to spewing the same vile hate that they profess to loathe in others.

Make no mistake, every single one of the big names taking part in this farce makes a fortune from those social platforms. 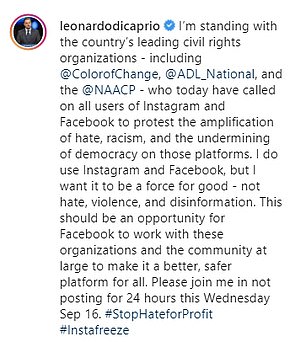 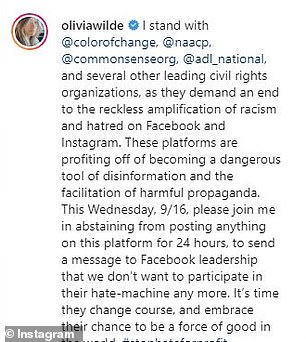 Leonardo DiCaprio wrote: ‘I do use Instagram and Facebook, but I want it to be a force for good – not hate, violence, and disinformation.’ Olivia Wilde wrote, ‘These platforms are profiting off becoming a dangerous tool of discrimination’

Kardashian-West has ruthlessly exploited it to such a successful extent that she can now charge firms up to $1 million for a single Instagram post.

A one-day boycott will thus have zero impact on her ability to keep coining it in from the very same people she claims are failing the American people so badly by causing so much hate and disunity.

If she and her famous pals REALLY believe Facebook is such a malevolent force, then they should quit its platforms completely.

But they won’t, because that would cost them millions.

So, at the heart of this boycott lies an intellectual conceit based, in most cases, on pure commercial greed.

I also believe that their main target, Facebook owner Mark Zuckerberg, is not the enemy here.

His only real ‘crime’ is that he believes passionately in freedom of speech, for everyone of any political persuasion.

That doesn’t mean he wants unacceptable hate contaminating his platform.

Facebook now employs 35,000 people whose only job it is to remove hateful material. They’re not going to stop it all, because that would be impossible, but they certainly can’t be accused of turning a blind eye to it.

But what these protesting liberal celebrities really want is all material removed that THEY hate, not any hate that comes from their own mouths.

They demand Trump and his supporters be censored, for example, whilst reserving the right to be as viciously hateful as they wish towards them without any censorship.

And by publicly boycotting Facebook and Instagram like this, they’re trying to use their celebrity power to bully and shame a company that defends free speech a hell of a lot more than they do.

If I were Zuckerberg, I’d call their sanctimonious bluff and announce that any of the stars involved who don’t start posting again by 6pm tonight will be permanently banned from Facebook and Instagram.

Trust me, they’d all come scuttling back faster than Kim Kardashian-West rakes in dollars by posting topless bird-flipping selfies.

The brand new £253m PRISON that could be mistaken for a luxury hotel awaiting 1,680 guests

Mr.குட்டிபுலி 😍💕 Vlog after discharge | Setting up his closet 👶|...

The brand new £253m PRISON that could be mistaken for a...