Prince Albert of Monaco has called on citizens to follow public health recommendations and revealed that he feels ‘okay’ but ‘stuffed up’ following his diagnosis with coronavirus.

The 62-year-old monarch, who previously suffered from pneumonia, told his nation ‘we’re going to get through this’ from his self-isolation at the palace apartments.

The first known head of state to be infected with the virus met Prince Charles ten days before his diagnosis, at a charity event for WaterAid in London.

The Mediterranean enclave confirmed nine cases of the virus in its latest update on Wednesday. The first was recorded on February 28. 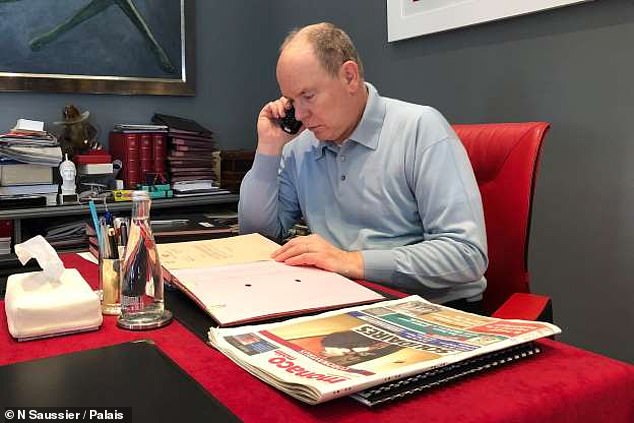 Prince Albert, pictured with tissues in self-isolation in Monaco’s palace, told his nation they can ‘get through this’ and revealed he feels ‘stuffed up’ due to the infection 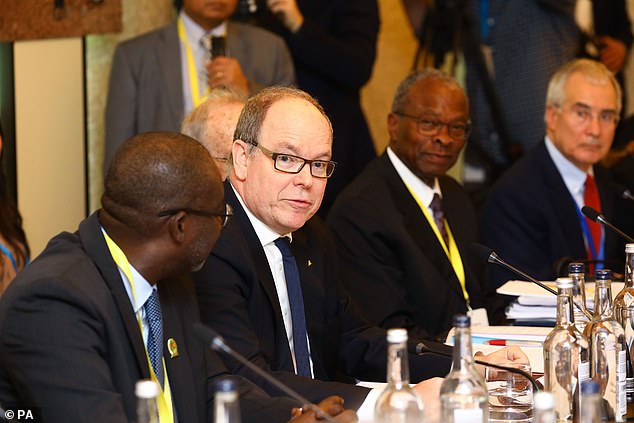 Prince Albert of Monaco has tested positive for coronavirus , the royal palace said yesterday. It comes just ten days after he was pictured (above) sitting opposite Prince Charles at a WaterAid charity event in London 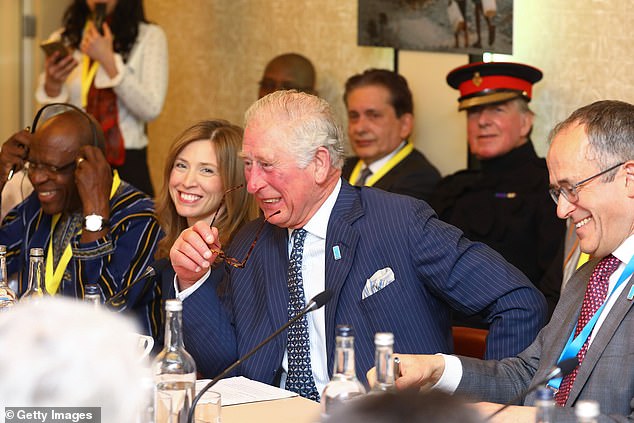 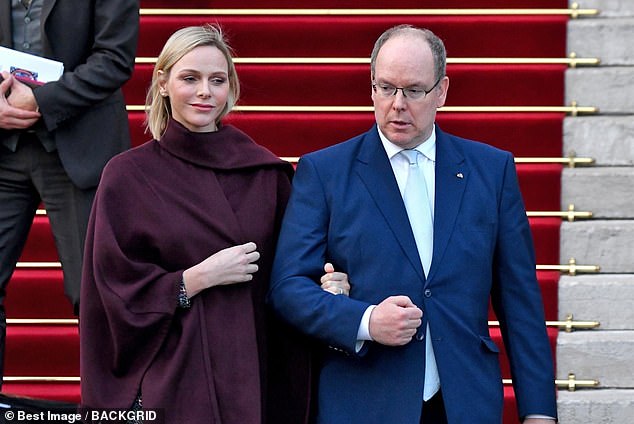 Prince Albert of Monaco, pictured with his wife Princess Charlene of Monaco last year, has tested positive for coronavirus

The royal told People  magazine, in a message for the nation, that everyone should ‘follow instructions’ and not ‘mess around’ with the virus.

‘We’re going to get through this,’ he said. ‘It’s going to take a while, but everyone has to follow the recommendations. Yes, it’s a nuisance and yes, being confined is very limiting – but it’s the only way to stop the spread of the virus.

‘This virus is serious and the propagation is very serious. It can hit anyone of any age group at anytime.’

The monarch said he had been taking precautionary measures such as using hand sanitiser ‘for weeks’ but feels he could have caught the virus in the last ten days.

Acknowledging his age may put him at greater risk from the virus, he said his flu-like symptoms remain ‘mild’ and include a cough and feeling stuffed up. He also had a runny nose for the first few days.

His wife Charlene and their five-year-old twins Jacques and Gabriella are in the country house in Roc Agel and none have any symptoms of the virus.

The palace said yesterday Albert’s health ‘does not inspire any concern’, saying he was continuing to work from his private apartments.

However, he is being monitored by his personal doctor and by specialists at the Princess Grace Hospital Centre, which is named after his mother Grace Kelly. 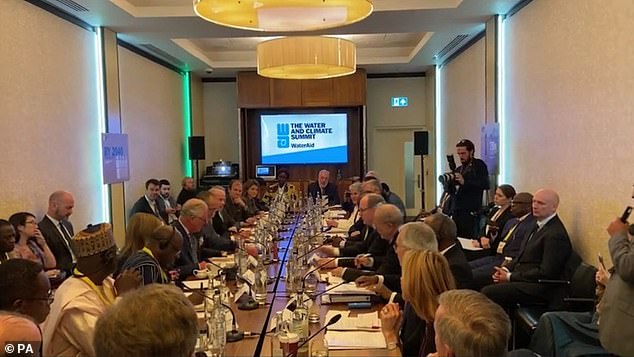 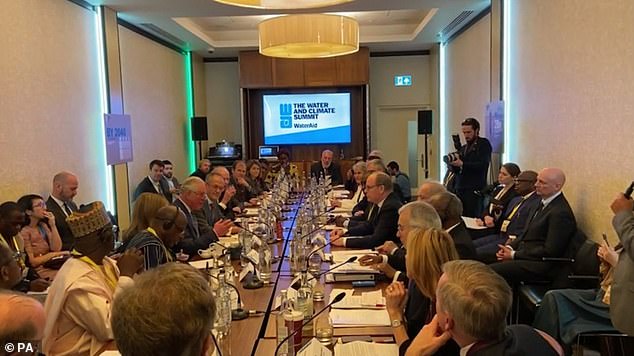 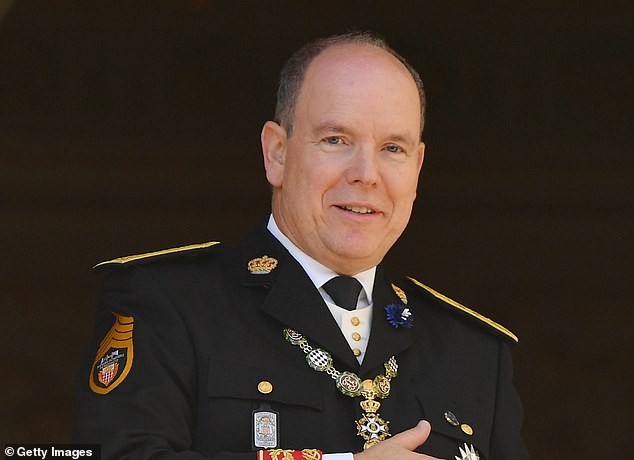 The 62-year-old prince, pictured attending Monaco National Day celebrations in Monte Carlo, was tested for the pathogen at the start of this week

Albert has urged the 39,000 inhabitants of Monaco to observe quarantine rules to stop the spread of the virus, a statement said.

Like in neighbouring France, schools and nurseries in Monaco have been shut down and non-essential businesses ordered to close.

Restaurants, casinos, cafes, concert halls, cinemas and nightclubs have all had to close their doors, although food stores, pharmacies and banks are still open.

The statement yesterday also added that Prince Albert is in constant contact with members of his cabinet, the government and his closest staff.

The Mediterranean enclave had confirmed nine cases of the virus in its latest update yesterday. The first was recorded on February 28. 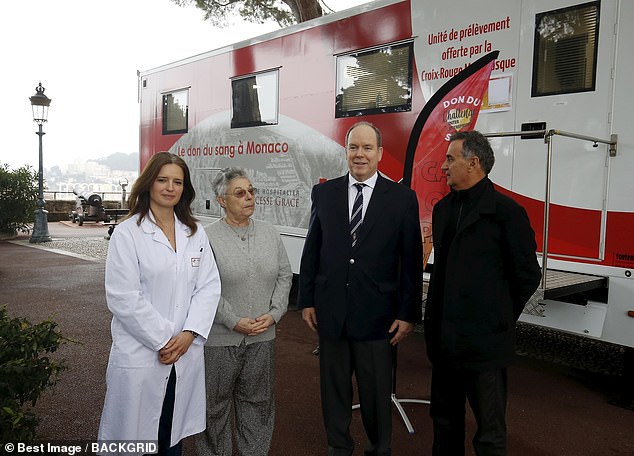 Prince Albert II, second right, was seen in public six days ago visiting a blood donation bus which was installed at the Place du Palais in Monaco 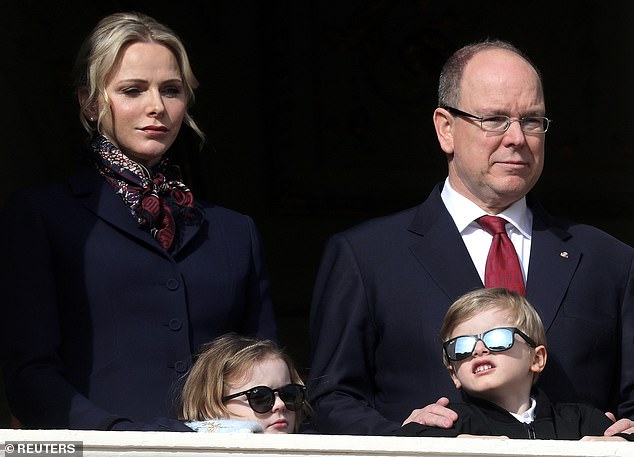 Prince Albert II of Monaco, his wife Princess Charlene and their children Prince Jacques and Princess Gabriella stand on the palace balcony in Monaco in January this year

The Monaco Grand Prix has been called along with several other events on the Formula One calendar because of virus fears.

It is unclear whether Albert’s wife, Princess Charlene, has been tested for the virus.

The 42-year-old former South African Olympic swimmer, formerly known as Charlene Wittstock, married Albert in 2011. She had twins in 2014.

Albert, born in 1958, is the second child of Princess Grace and Prince Rainier of Monaco. He has two older children from earlier relationships.

He became a five-time Olympic bobsledder for Monaco, and in recent years has been a global environmental campaigner.

Albert graduated from Amherst College in Massachusetts with a degree in political science in 1981, and is a member of the International Olympic Committee.

He inherited the throne when his father Rainier died in 2005. His mother Grace died after a car accident in 1982.

The princely palace has promised to provide regular updates on Albert’s condition. 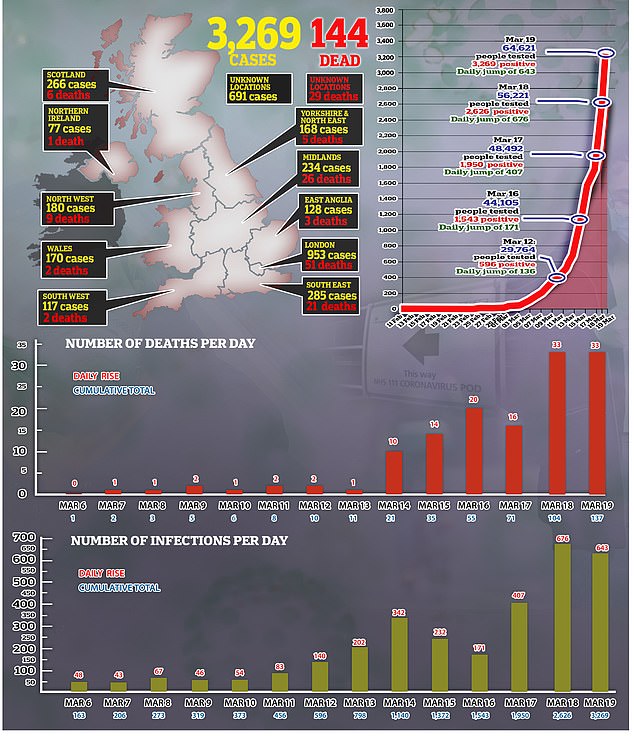 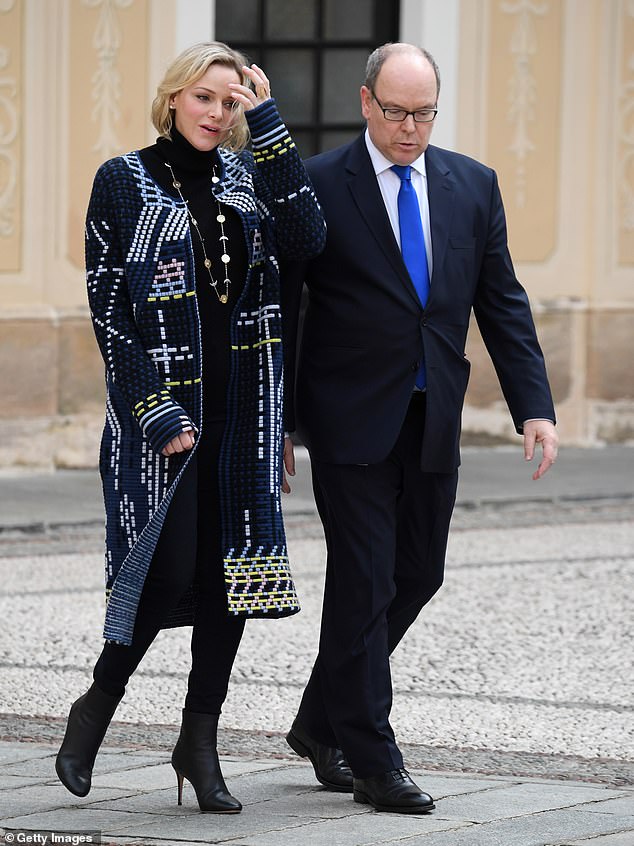 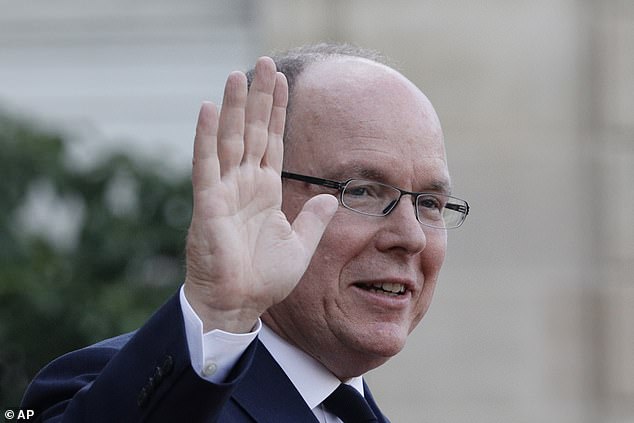 The royal palace in Monaco said Albert’s health ‘does not inspire any concern’, saying he was continuing to work from his private apartments. He is pictured in Paris last year

Neighbouring France has imposed some of Europe’s toughest lockdown measures, ordering people to stay at home unless necessary.

However, some people have still been strolling in parks and ignoring the 3ft safety distance to avoid close contact.

‘There are people who think they are modern-day heroes by breaking the rules while they are in fact idiots,’ interior minister Christophe Castaner told French radio.

Some officials have called for even stricter limits and Paris police are considering closing riverside walkways – a move already enforced in Bordeaux.

Mr Barnier said he was ‘doing well and in good spirits’ and announced he was ‘following the necessary instructions’ along with his staff.

Farmer working hard to get food on supermarket shelves during coronavirus...

The Jewish Chronicle and Jewish News to go into liquidation