Riot at notorious Philippine prison leaves nine dead as gang members attack each other at jail where 28,000 convicts are packed into space designed for 6,000

By Ryan Fahey For Mailonline

Nine inmates were killed Friday when members of rival gangs in an overcrowded Philippine prison attacked each other using improvised knives, an official said, in one of the deadliest jail clashes in years.

The pre-dawn fight broke out in suburban Manila’s New Bilibid Prison, the country’s largest, which holds more than 28,000 convicts in a complex designed for around 6,000.

‘They stabbed each other using improvised sharpened objects.’ 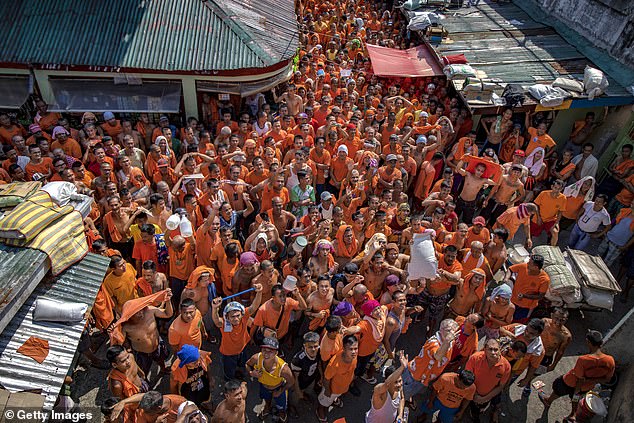 Prisoners gather outside their cells inside the maximum security compound of the New Bilibid Prison in Muntinlupa, Metro Manila, Philippines in October last year. Nine inmates were killed at the New Bilibid prison early this morning after a fight broke out between rival gangs

Chaclag said a number of prisoners were also injured in the fighting inside a block of cells holding at least 6,000 inmates, including members of the Commando and Sputnik gangs.

It is not clear what triggered the violence.

‘They can turn on each other in an instant with barely any provocation,’ Chaclag said.

‘One glance deemed by the other party as hostile is all it takes.’ 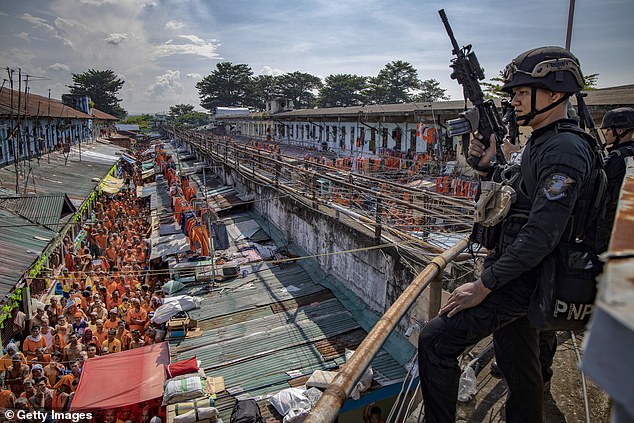 Violence is common in Philippine jails where inadequate infrastructure and a slow-moving and overburdened judicial system means cells are sometimes filled to five times their capacity.

Overcrowding has become an even greater problem since President Rodrigo Duterte launched a drug crackdown in 2016 that has seen thousands sent to prison.

Friday’s clash was one of the deadliest since 2005 when police crushed an overnight riot by Islamic militants at another Manila prison, killing 17 inmates.

Mother claims parents who can’t afford to feed their children should...