Ryanair is set to ground almost its entire flight from Tuesday in response to the growing number of coronavirus travel bans.

In a statement on its website, the airline said: ‘Our flight schedules have been hugely disrupted by these Government restrictions and will be subject to further cuts.’

Up until Tuesday March 24, Ryanair Group Airlines will cut flight schedules by over 80 percent.

Ryanair’s statement on its website. Ryanair’s move comes amid a growing crisis for the hospitality and travel industry

From next Tuesday, the company expects ‘most if not all Ryanair Group flights will be grounded, except for a very small number of flights to maintain essential connectivity, mostly between the UK and Ireland.’

Other airlines including British Airways, Virgin Atlantic, Norwegian, Easyjet and Jet2, have cut schedules to as little as 10 per cent of normal levels.

Ryanair’s move comes amid a growing crisis for the hospitality and travel industry.

Talks are continuing between the Department for Transport and the Treasury about a rescue deal for airlines and airports, with an announcement thought to be imminent.

Virgin Atlantic said staff had agreed to take eight weeks of unpaid leave over the next three months, with the salary docked from workers’ pay over six months so their income does not dry up.

All 10,000 employees of the company, founded and controlled by Richard Branson, will also be offered voluntary redundancy. 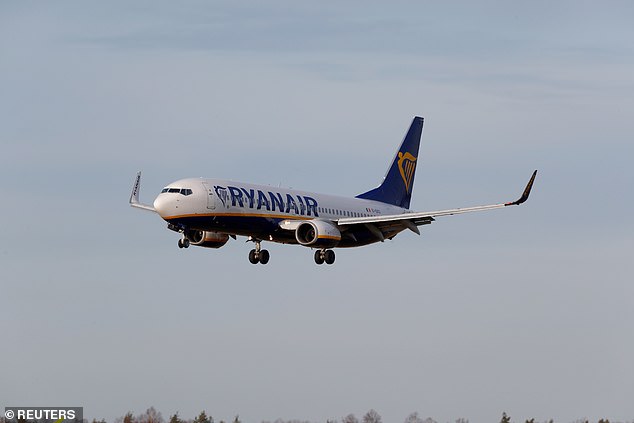 He told Sky News: ‘We want to make sure that companies and individuals and organisations who are in a good state – not those that are going to fail anyway – are able to continue.’

The most extreme measures were taken by Norwegian, which is the third largest airline at Gatwick.

It is temporarily laying off around 7,300 staff – 90 per cent of its workforce.

The airline which is saddled with debt, has lost more than 80 per cent of its market value since the start of the year.

IAG, which has announced three-quarters of flights will be cut over the next two months, also said it was ‘taking actions to reduce operating expenses and improve cash flow’.

The group, which also owns Iberia and Vueling, employs 66,000 staff.

Its chief executive Willie Walsh stressed that he had not requested a government bail-out and insisted IAG was ‘resilient with a strong balance sheet’.

Meanwhile one of Scotland’s busiest airports is to close some areas as it predicts ‘zero or close to zero passenger demand’ during the coronavirus outbreak.

Edinburgh Airport plans to open talks with staff on cutting at least 100 jobs among the 750 people it directly employs. More than 6,000 further workers have jobs relating to the airport.

A number of countries have enforced travel bans and the Foreign Office has advised against all but essential travel for UK citizens for 30 days, leading to airlines cutting back on flights.

The airport has now put a consolidation plan in place aimed at enabling it to return to full operations when the virus outbreak ends.

The plan includes closing some areas of the terminal, including more than a third of the gates and one of the two arrival halls, with only a handful of shops, bars and restaurants expected to remain open.

Passenger numbers in February fell 0.4% compared to the previous year to 935,455, but following the virus outbreak in the UK the airport is ‘predicting a period of zero or close to zero passenger demand’.

Edinburgh Airport chief executive Gordon Dewar said: ‘This is an unprecedented time not only for the aviation industry but for everyone as we all do what we can to ensure the health of ourselves and of those around us.

‘For us, that includes the health of our airport. Our plan is based on keeping the airport open throughout and being there for those people who are still travelling and those staff members who are making that travel possible.

‘We’re in a situation which is ever changing and as more countries enforce travel bans or special measures, then it stands to reason that airlines will feel that impact and airports then feel that pain too.

‘Unfortunately, that is happening now and we are trying to mitigate as best as we can and steer the airport through this situation in preparation for what comes next – and that is the biggest unknown in all of this.’

CHRISTOPHER STEVENS: Belsen and a nightmare vision we must never turn away from

CHRISTOPHER STEVENS: Belsen and a nightmare vision we must never turn...