Scottish drinkers have been making the most of their last day at the bar before pubs shut down at 6pm for two weeks in a bid to crackdown on coronavirus.

New restrictions introduced for Scotland’s pubs, bars, restaurants came into effect earlier today meaning venues across the country were only be allowed to operate indoors between 6am and 6pm but not serve alcohol.

Drinks can still be served until 10pm in outdoor areas but pubs and licensed restaurants in five health board areas across the central belt will be forced to close for 16 days as of this evening.

Establishments in Greater Glasgow and Clyde, Lanarkshire, Ayrshire and Arran, Lothian, and Forth Valley can only provide takeaways during this time with the temporary measures set to end on Sunday October 25. 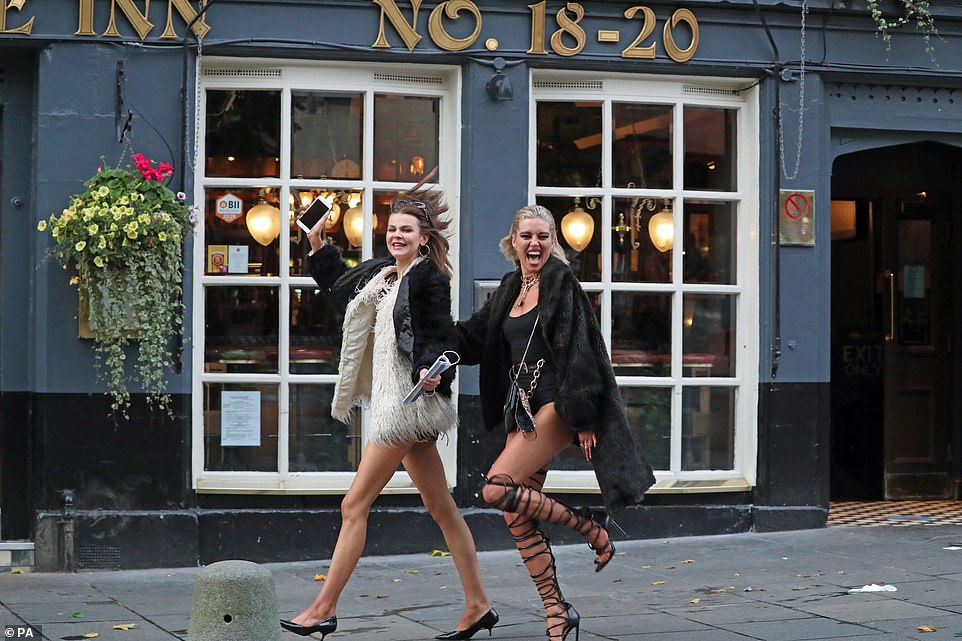 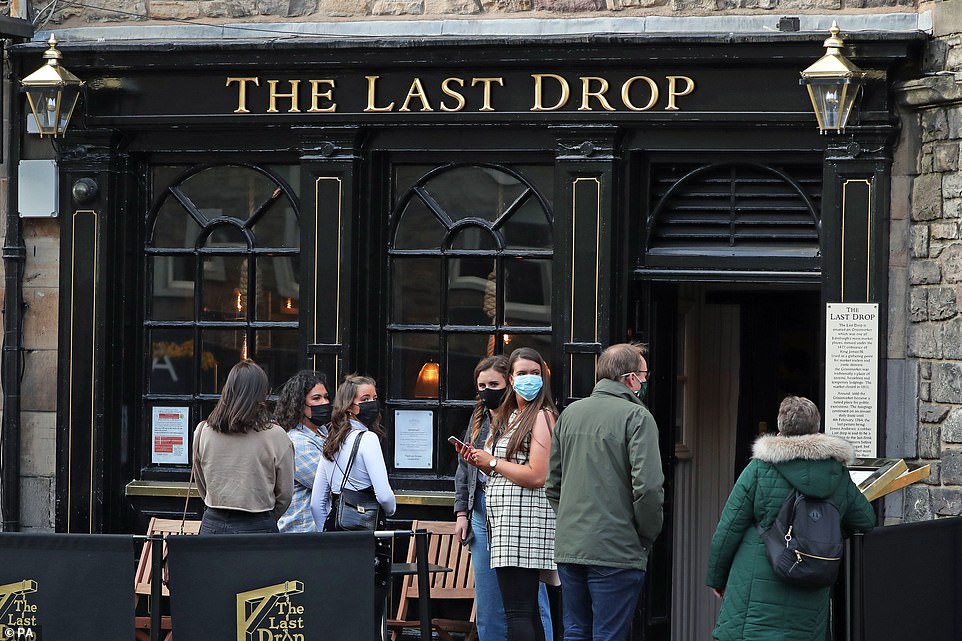 Scottish drinkers have been making the most of their last day at the bar before pubs shut down at 6pm for two weeks in a bid to crackdown on coronavirus. Pictured: People waiting outside The Last Drop pub in Edinburgh 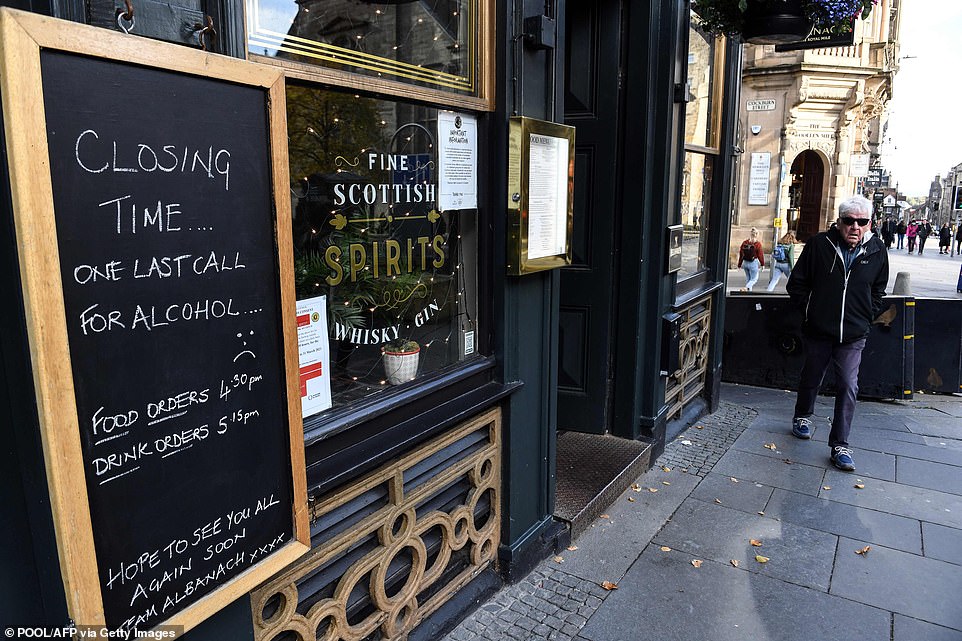 New restrictions introduced for Scotland’s pubs, bars, restaurants came into effect earlier today. Pictured: Sign explaining reasons for closing is seen on the door of a bar in Edinburgh 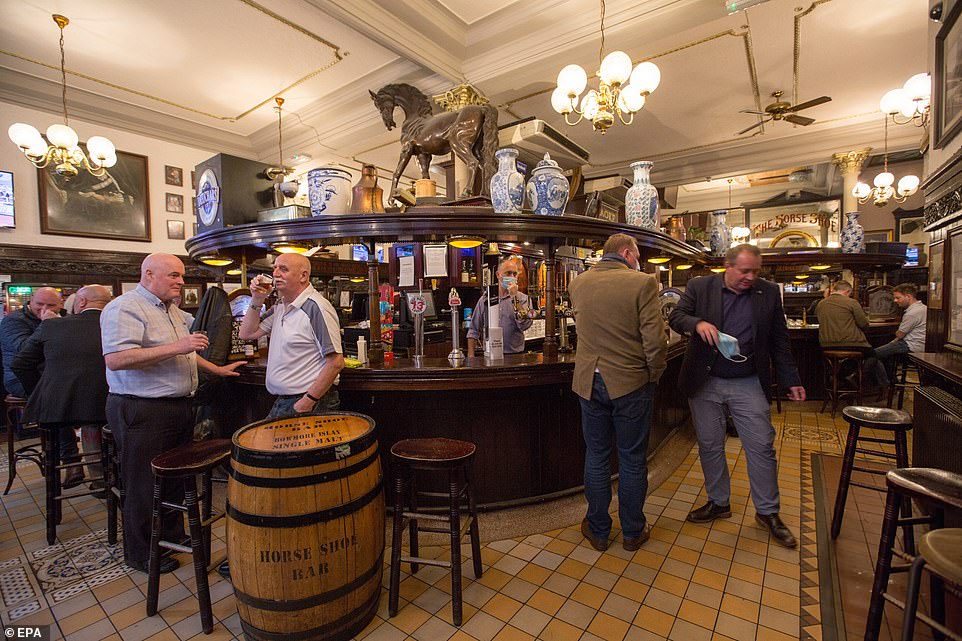 Patrons seen during their last minutes in the Horseshoe Bar in Glasgow, Scotland, earlier today before it was forced to close at 6pm for two weeks

Pub staff have been left ‘absolutely broken’ at having to shut down for a second time, according to one landlord in Scotland.

Karina Bowlby, who owns The Fat Pheasant at Newton, near Edinburgh, prepared earlier today to close her pub until at least October 25 as new restrictions come into force at 6pm.

It comes as a blow to Ms Bowlby and her team, who felt like they had only just got back on track after being allowed to reopen from the first Covid-19 lockdown in July. 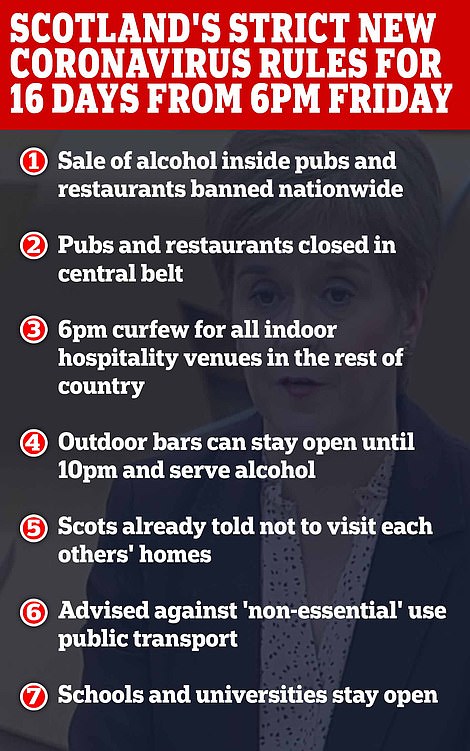 ‘Last weekend, we were fully booked and the team were on a high thinking, “This is great, we’ve got everyone’s trust and confidence back again, things are going to be really good from now on”.

‘It was extremely hard seeing their faces when that announcement came through on Thursday because they looked absolutely broken.

‘They looked like they’d had the wind completely taken out of them.’

Like many in the industry, Ms Bowlby feels hospitality has been unfairly singled out for tighter restrictions.

They believe the Government has not produced any strong evidence to show a significant level of transmission is occurring in pubs, restaurants and cafes.

She said: ‘We’ve spent a lot of money making the premises Covid-secure: we have hand sanitisers everywhere, we’re very, very strict with people coming in, and I feel we’ve done all we can.

‘I just don’t feel there’s justification for shutting down the pubs.

‘The stats don’t warrant it, as regards to the amount of infections from a premises, and I’m just really, really frustrated.

‘I feel we’ve been made a bit of a scapegoat really.’

Ms Bowlby said she accepted some measures were needed in the central belt of Scotland, where transmission rates have been high, but felt it was ‘highly unfair’ on businesses in other areas of the country where rates are relatively low.

And she suggested a more appropriate measure within the central belt would have been to restrict the sale of alcohol, allowing businesses to stay open and continue to sell food.

Now she faces another period of closure and, after that, an uncertain future with customers potentially apprehensive to return.

‘This is what the politicians don’t understand,’ she said.

‘If you lock down a business, on the day it reopens it just doesn’t ping back to normal levels. It takes time.’ 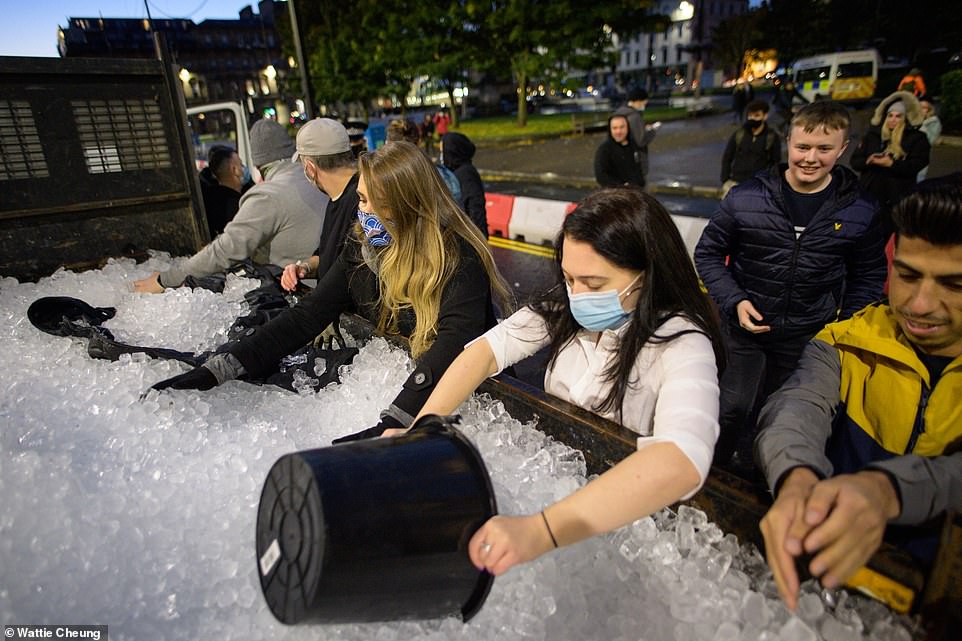 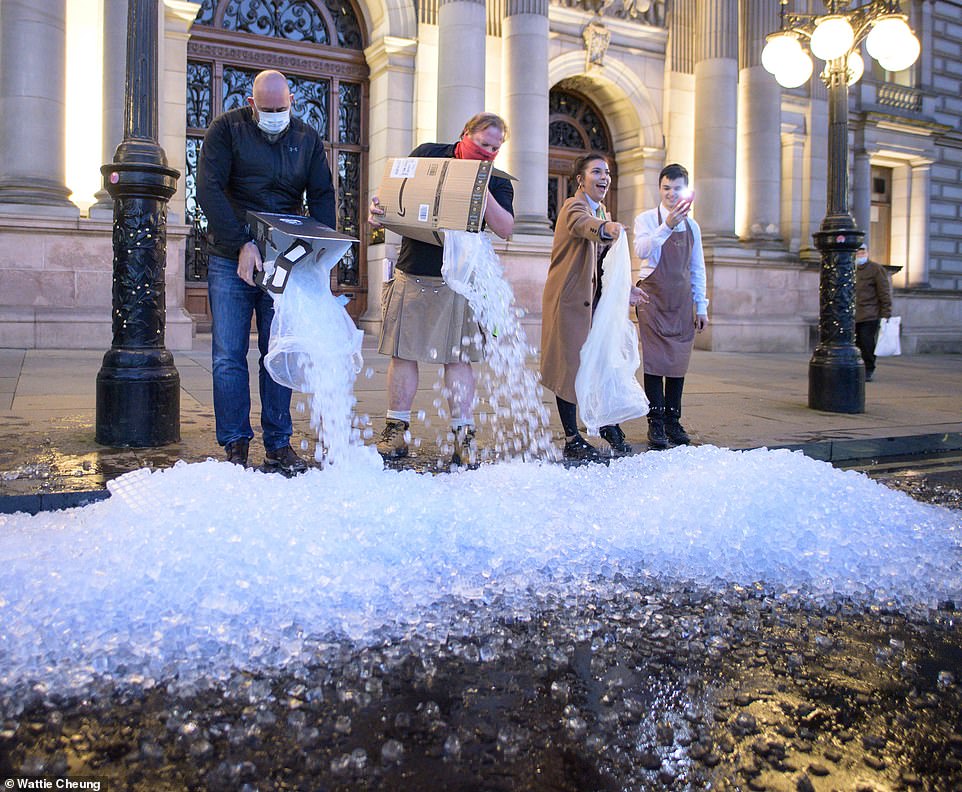 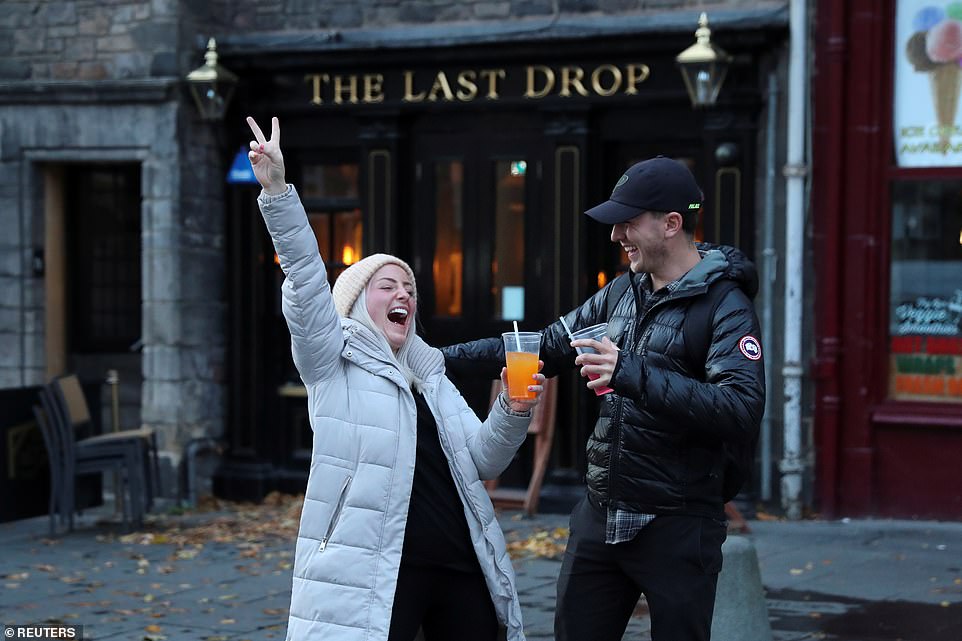 People laugh as they hold plastic glasses outside a pub at Grassmarket, Edinburgh, as they make the most of their last day at the bar before pubs shut down at 6pm for two weeks in a bid to crackdown on coronavirus 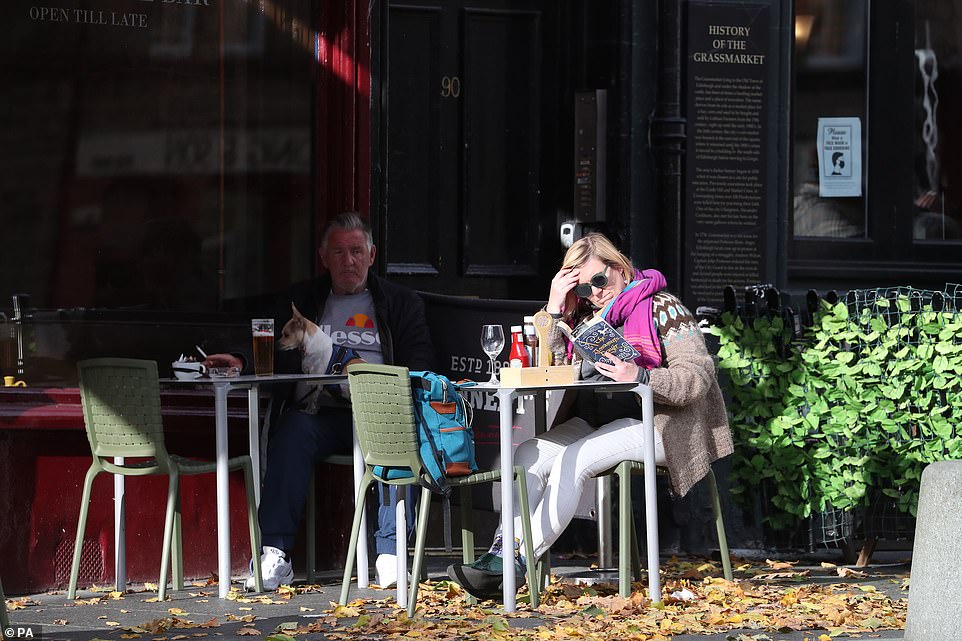 First Minister Nicola Sturgeon revealed on Thursday that cafes can be exempt from the central belt shutdown if they do not sell alcohol, triggering confusion about how a cafe is defined. Pictured: Woman reads a book in an outdoor cafe area in The Grassmarket, Edinburgh 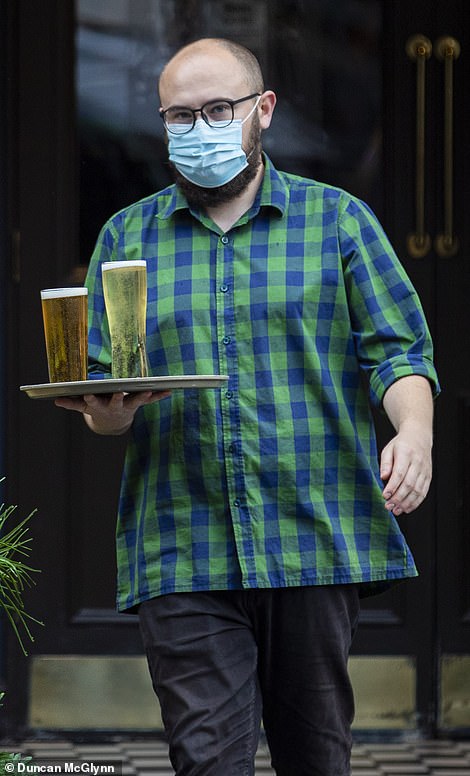 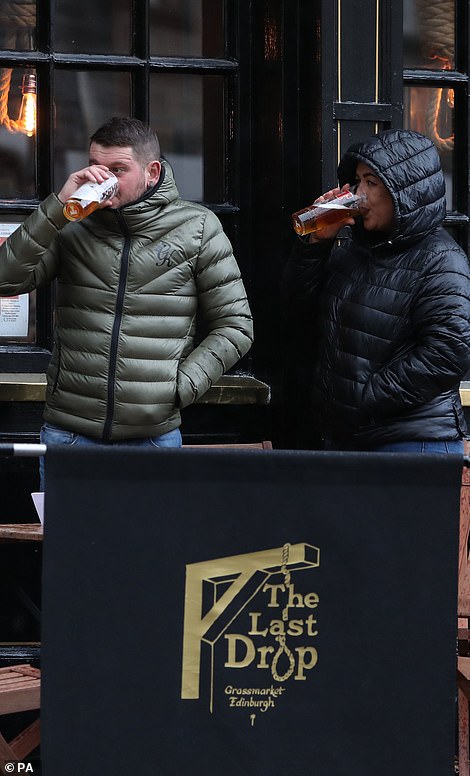 The temporary restrictions announced by First Minister Nicola Sturgeon to help curb the spread of coronavirus will come into effect from 6pm. Pictured: Waiter carries a tray of drinks outside at The Beehive Inn in Edinburgh (left) and people drinking outside The Last Drop pub (right) 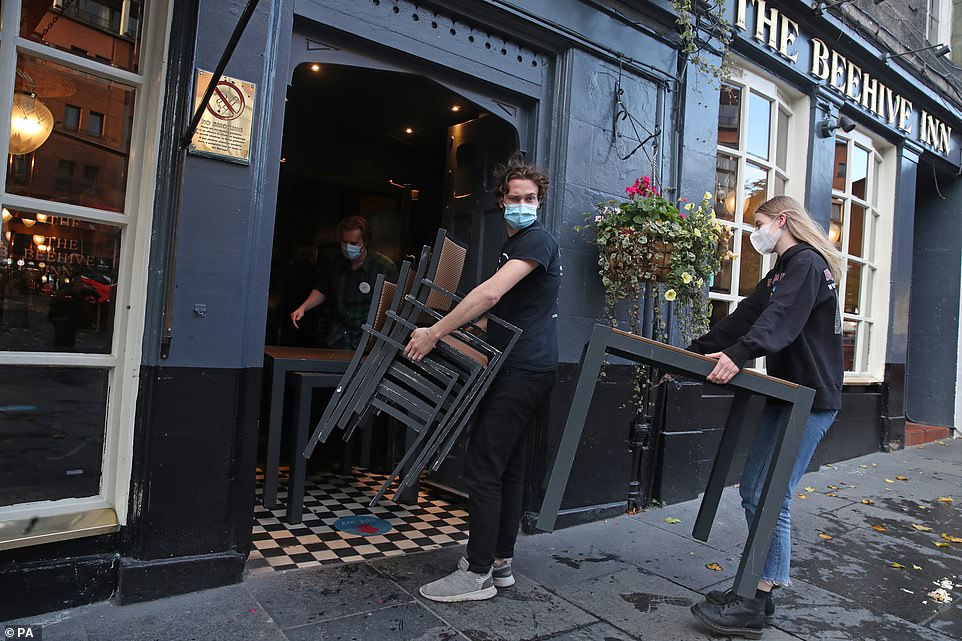 People clear away outside The Beehive Inn in The Grassmarket, Edinburgh, as temporary restrictions announced by First Minister Nicola Sturgeon to help curb the spread of coronavirus came into effect

First Minister Nicola Sturgeon revealed on Thursday that cafes can be exempt from the central belt shutdown if they do not sell alcohol, triggering confusion about how a cafe is defined.

Other changes include shops being asked to return to two metres physical distancing and the reintroduction of earlier measures such as one-way systems.

Speaking on BBC Radio Scotland’s Good Morning Scotland programme on Friday, National Clinical Director Jason Leitch acknowledged the measures do not create a ‘neat division’, but said he expects hospitality venues to ‘know which they are’.

He said the regulations, being published on Friday, should have more details about what venues are exempt, with local authorities and environmental health officers expected to intervene in disputed cases.

Prof Leitch said: ‘What we’re trying to do here is curb hospitality in a way that stops households intermixing, particularly in the evenings but also sometimes during the day I’m afraid in the central belt.

‘But we want a kind of social isolation exemption, so we want people who use cafes, particularly the elderly or single parents and those with kids who can’t have people in their houses.

‘We want them to be able to still see each other – but very, very safely.

‘It’s not a neat distinction but most institutions know which they are and, if they need help with that, local authorities and the regulations today will help.’

Asked why there had been little or no engagement with the industries affected by the new restrictions, Prof Leitch argued the fast spread of the virus did not allow time for extensive consultation.

‘The nature of the virus is that, as the numbers rise, you have to act fast – so you get fast evidence, fast advice, and sometimes those decisions are quite quick,’ he said.

He insisted the measures are not a ‘punishment’ for Scots not adhering to the guidance, but accepted sectors such as hospitality ‘feel downtrodden’.

Commenting on the lack of clarity, the Scottish Licensed Trade Association posted on Twitter: ‘Absolutely ridiculous that on the day new regulations come into force we still do not know what licensed premises in the central belt will be allowed to open till 6pm for food only – shambles.

‘What is a ‘licensed cafe?’ Find out maybe today!’

In the Scottish Parliament on Thursday, Health Secretary Jeane Freeman told MSPs the measures are a ‘balance’ and ‘targeted at those situations where the virus has the best chance of moving from one person to another’.

Scottish Conservative health spokesman Donald Cameron said although the Tories reluctantly support the new restrictions, they will be ‘catastrophic’ for the hospitality sector and its supply chains. 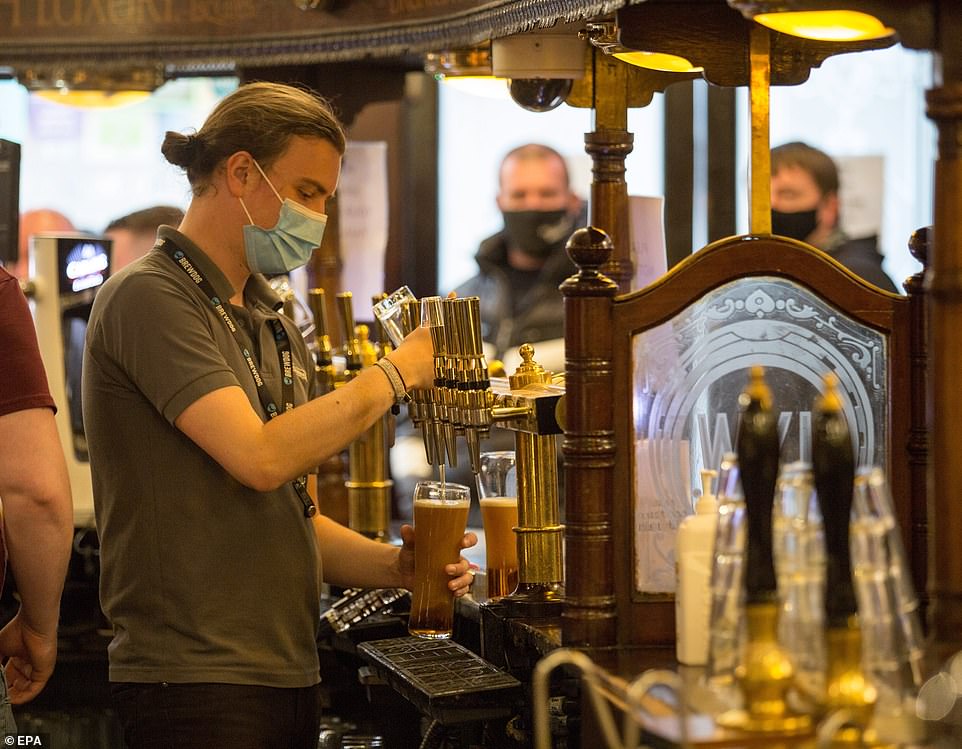 Establishments in Greater Glasgow and Clyde, Lanarkshire, Ayrshire and Arran, Lothian, and Forth Valley can only provide takeaways during this time with the temporary measures set to end on Sunday October 25. Pictured: Staff pulling pints during the last minutes before the curfew at the Horseshoe Bar in Glasgow 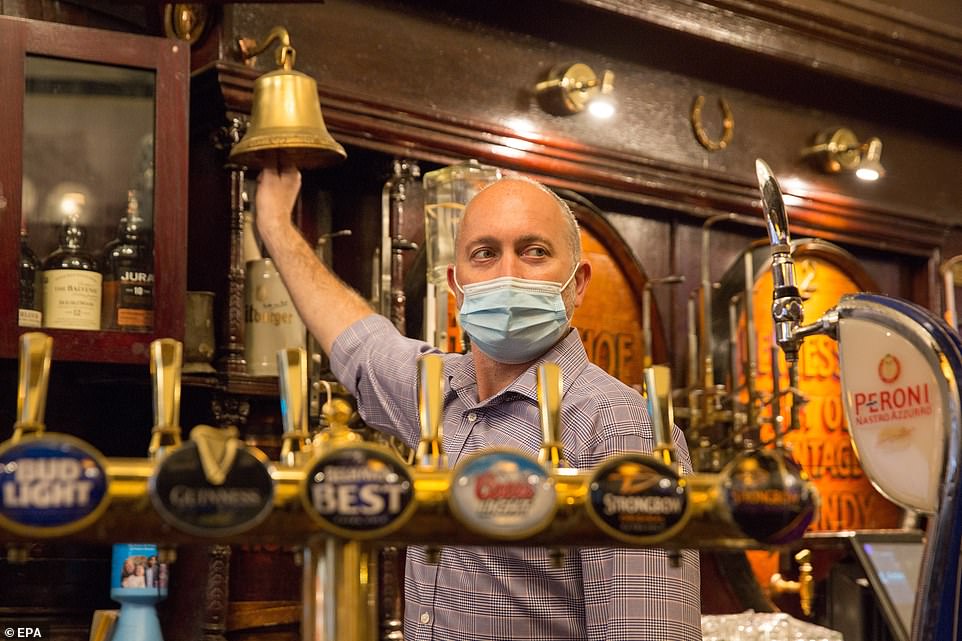 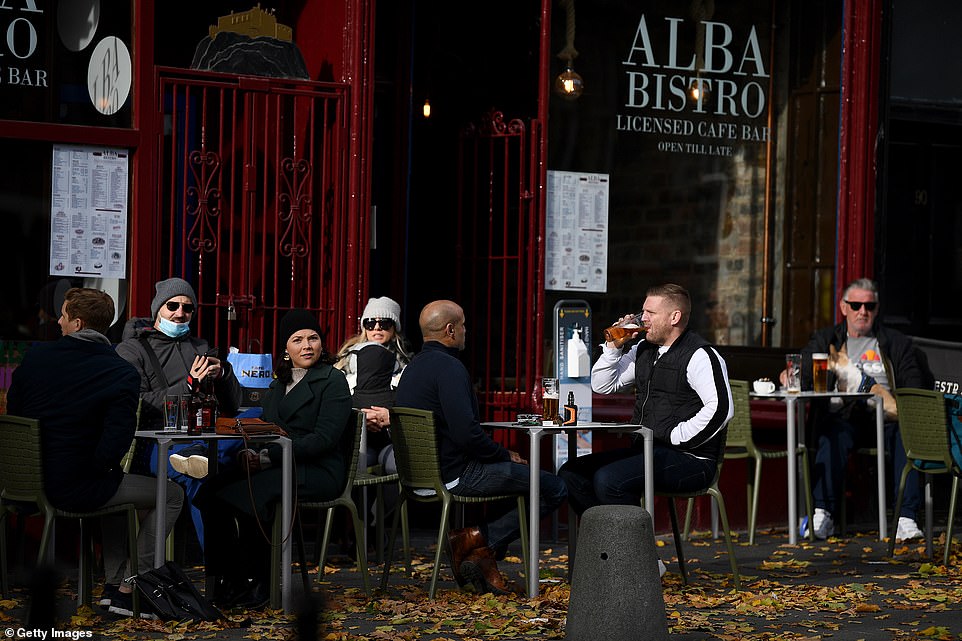 Members of the public drink outside in Grassmarket, Edinburgh, prior to pubs calling last orders at 6pm 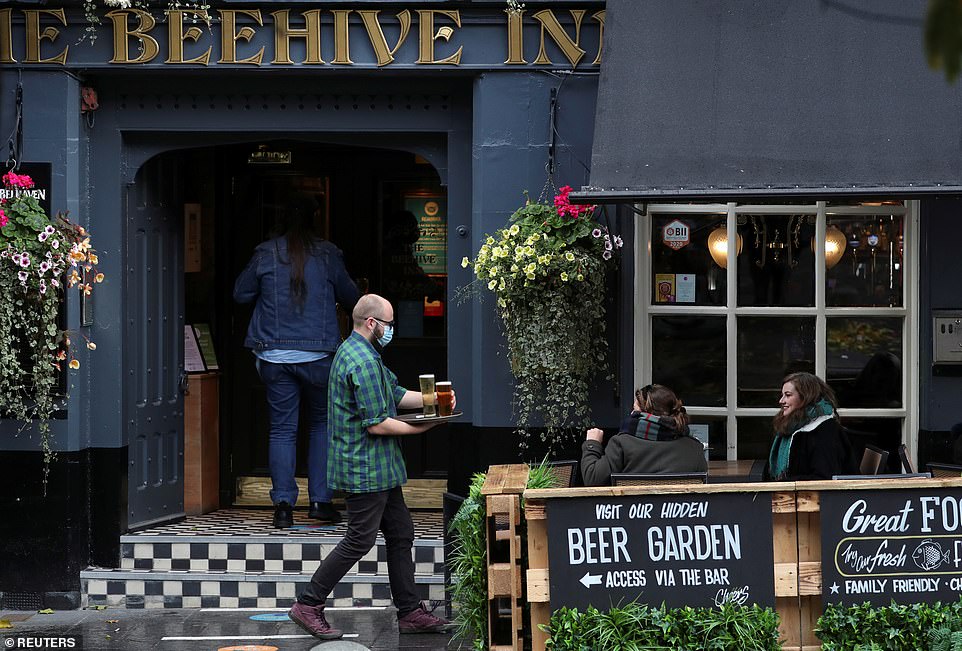 Mr Cameron said: ‘Given the need for compliance and buy-in from the public, it’s imperative that there is clarity about what people can and cannot do.

‘Further confusion has arisen today over whether cafes with alcohol licences can open.

‘And if they can’t, how do you define a cafe versus a restaurant versus a pub?

‘The SNP Government must clear this confusion up because business owners need to know whether they can open in two days’ time.’

Further measures impacting the five areas of central Scotland will be imposed from Saturday, including contact sports for adults aged 18 and above are being suspended for the next two weeks – apart from for professional sports.

Indoor group exercise activities will no longer be allowed, however gyms can remain open for individual exercise.

Snooker and pool halls, indoor bowling, casinos and bingo halls will also close and no outdoor live events are allowed in these five areas.