Serena Williams and Meghan Markle may well have formed a close bond behind closed doors – but as far as the public is concerned, the tennis pro would rather everyone forget that she even knows the Duchess of Sussex’s name.

The 39-year-old tennis pro gave her ‘really good friend’ a shout out in a new video interview with Vogue, but refused to say the former Suits star’s name – joking to the cameras that she ‘never says her name, never sees her’ and ‘doesn’t know her’.

But while Serena may be doing her best to protect 39-year-old Meghan’s privacy in public, she could not hide the bond between the two women – revealing, without uttering her close pal’s moniker of course – that they have even been swapping beauty tips and product recommendations. 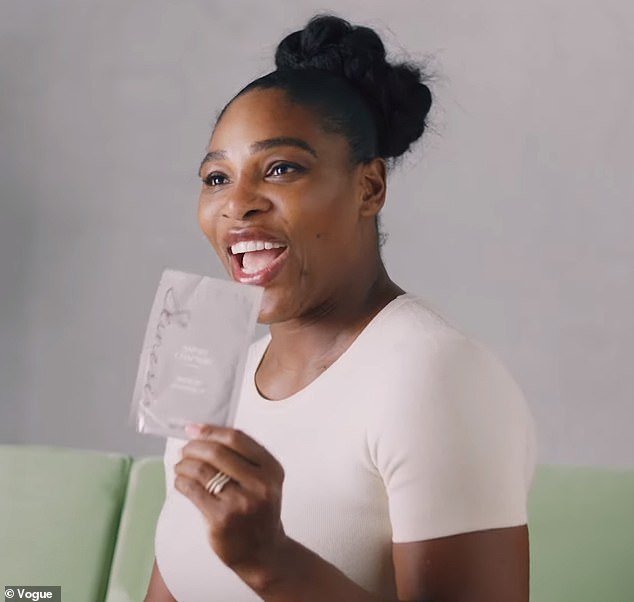 Staying mum: Serena Williams admitted in a recent Vogue video that she ‘never says’ close pal Meghan Markle’s name in public, while joking that she ‘doesn’t know her’ 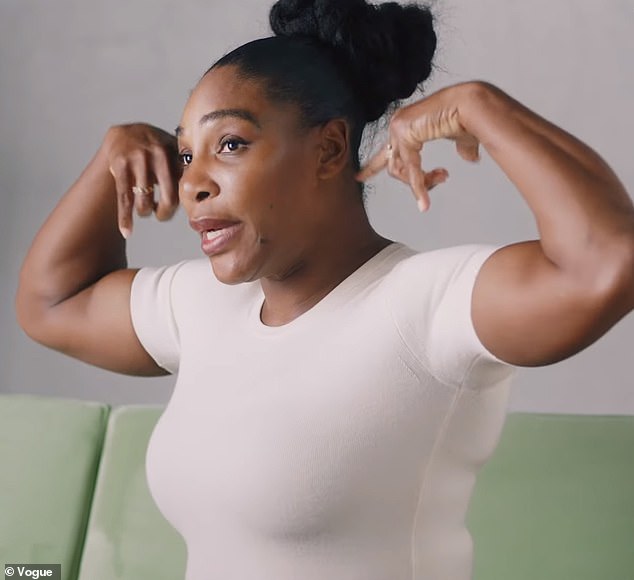 Hush hush: The 39-year-old mom-of-one shared the contents of her handbag in a clip for the British version of the publication, and revealed a beauty product recommended by Meghan 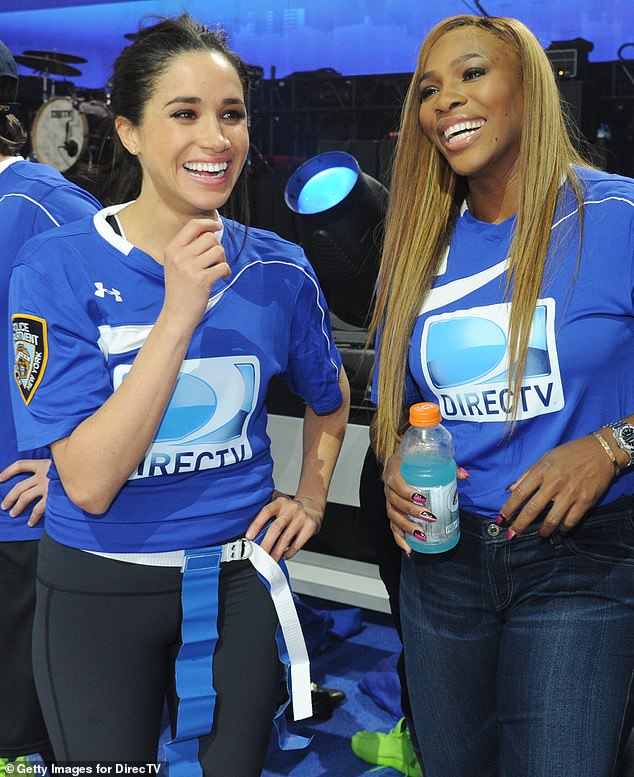 Privacy: Despite having had a close friendship with the Duchess of Sussex (pictured in 2014) for nearly ten years, in recent months, Serena has refused to speak about her publicly

Serena opened up about one of the beauty products that Meghan recommended to her while rummaging through her bag on camera for British Vogue’s In The Bag series – a clip that accompanies the sports star’s stunning turn on the magazine’s November cover.

During the video, Serena pulled out several beauty products from her two bags, telling the cameras that she is ‘really obsessed nowadays’ with different skincare and cosmetic items – including one particular item that Meghan told her to try: a chin and jaw mask.

The $76 product, created by Sarah Chapman, Meghan’s go-to facialist in London, and the woman who helped the Duchess of Sussex to prep her skin for her wedding to Prince Harry, comes in a small sachet, and can be worn, Serena notes, when she is driving around.

‘The chin mask I can do when I drive,’ she says while cracking up. ‘Yes I’m laughing, but I am very serious. You apply it up and you put it around your chin and jaw and it keeps your jaw and chin firm.’

She then credits Meghan with the idea, but avoids referring to the Duchess by name or even title, simply saying: ‘A really good friend of mine told me that but I never say her name.

‘Never see her, never heard her, don’t know her!’ 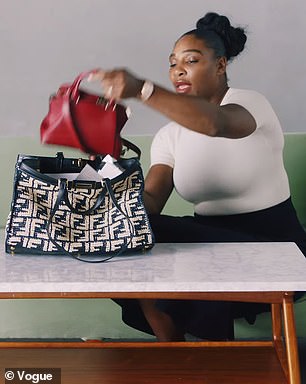 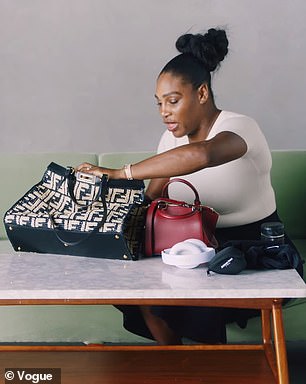 Rummaging: Serena revealed that she uses a chin and jaw mask recommended to her ‘by a really good friend’. The mask is made by Meghan’s long-time facialist Sarah Chapman 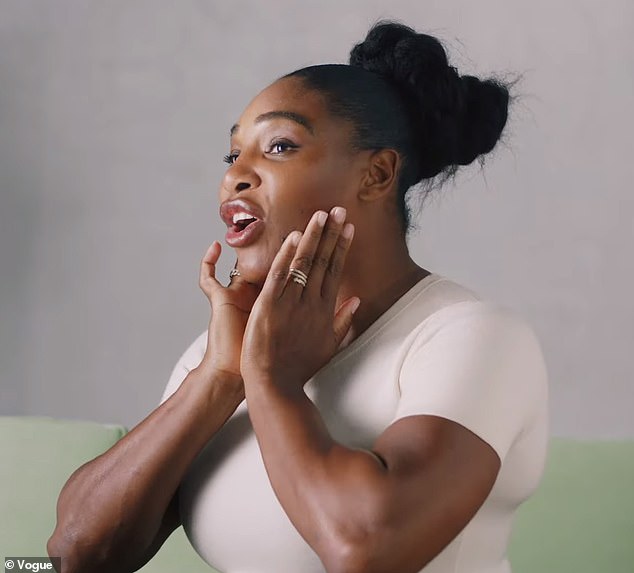 Handy! The grand slam champion and mother-of-one said she uses the mask while she is driving, adding that the $76 product keeps her chin and jaw looking ‘firm’ 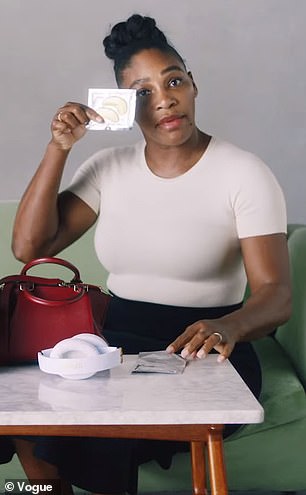 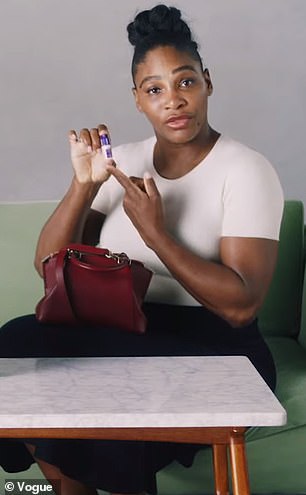 Quiet: ‘A really good friend of mine told me [about it] but I never say her name. Never see her, never heard her, don’t know her!’ Serena joked 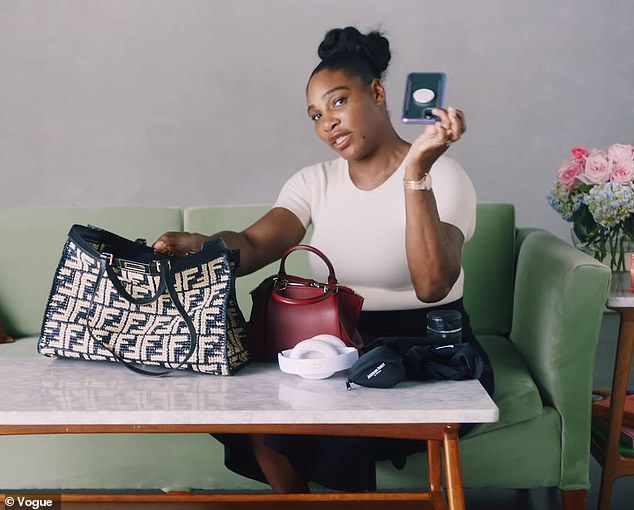 Trend: It is not the first time that Serena has joked about not knowing Meghan; she told Naomi Campbell in April that she ‘didn’t know what she was talking about’ when asked about her

The brand of choice for the mask is a big giveaway when it comes to Meghan’s identity however; Chapman is the skincare expert who the Duchess of Sussex called upon to help give her a bridal glow before she tied the knot with Prince Harry, and the facialist has since revealed that the two women formed a ‘dear friendship’ while working together.

In April, Chapman paid tribute to Meghan in a touching Instagram post, sharing several images of the mother-of-one, while writing: ‘Through my work I am fortunate to meet some incredible, interesting and inspirational people and over the past 2 ½ years I feel honoured to have spent much time with the Duke and Duchess of Sussex.

‘With Meghan, what began as a client relationship quickly turned into a dear friendship and she welcomed me into their lives.

‘I feel very grateful to be a small part of their journey observing the passion for everything they do and compassion for the causes and people they meet, but also to witness the moments other people don’t see.’

This Vogue video is also not the first time that Serena has jokingly insisted she doesn’t know who Meghan is, while trying to avoid opening up about their close bond.

In April during an interview with supermodel Naomi Campbell, Serena tried to dodge a question about her good friend’s move to Los Angeles with Harry, simply saying: ‘I don’t know what you’re talking about, don’t know nothing about that.’

MAIL ON SUNDAY COMMENT: Boris Johnson will need all his skills to reunite our fractured kingdom

ALEXANDRA SHULMAN’S NOTEBOOK: The biggest victim in the war on cars is your granny

MAIL ON SUNDAY COMMENT: Boris Johnson will need all his skills...

ALEXANDRA SHULMAN’S NOTEBOOK: The biggest victim in the war on cars...

Best and worst cases for the Warriors, the Knicks and the...