Cometh the hour, cometh the designer. The ever-resourceful Nicky Haslam, whose clients have included the Prince of Wales, Sir Mick Jagger and Sir Rod Stewart, is embarking on a virtual isolation treasure hunt to find items of furniture for his new home.

I can reveal that a kind friend has given him a grace-and-favour cottage on the Daylesford Estate in Gloucestershire which he can use for the rest of his life.

‘I have been given a beautiful Georgian house,’ Nicky, 80, told me from his West London flat. 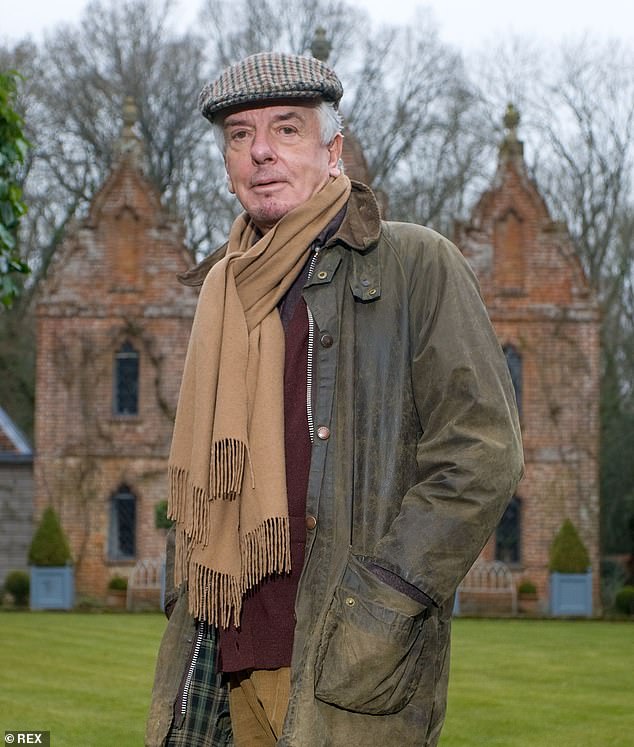 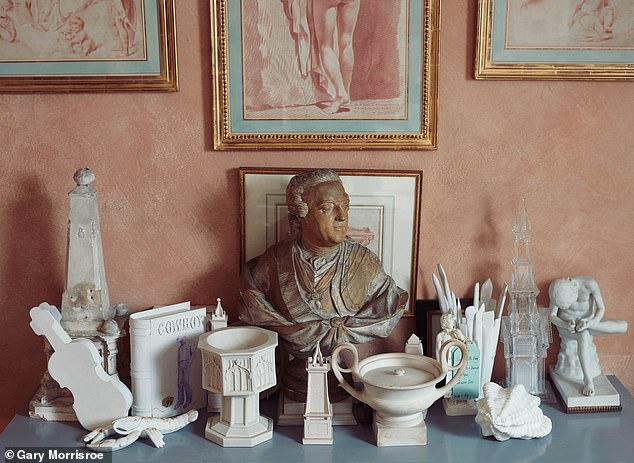 He was forced to return the house to the National Trust and sell the furnishings at a Bonhams auction in November. Pictured: Haslam’s collection of items that were offered to the auction house Bonhams 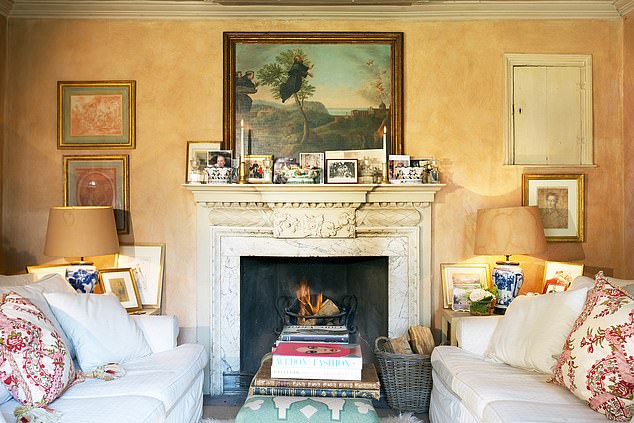 Pictured: Haslam’s Hunting Lodge property which was put on sale at Bonhams in November

‘It has three bedrooms and is all on one level so ideal for me, and it has a garden.’

Nicky was heartbroken last year when he had to give up his 16th century Hunting Lodge in Hampshire, which he had occupied for 40 years.

He had filled it with antique furniture, artwork and books and installed Regency Gothic Revival seats in the garden.

But he was forced to return the house to the National Trust and sell the furnishings at a Bonhams auction in November.

Now he has been spending his time productively in solitary isolation, scouring the online auction website eBay and shopping online. He bought four bookcases a few weeks ago and also a chest of drawers.

Nicky has a good eye for a bargain and has even found cartridge paper on eBay that he can use for his painting. ‘Cartridge paper is perfect for watercolours,’ he tells me.

‘I do plan to shop more on eBay for items for my new house such as wardrobes and beds, particularly now all the salesrooms and furniture shops are closed. My furniture in the lodge wouldn’t have been right for a Georgian cottage anyway, so I am starting again.’

He doesn’t regret selling anything last year but is now relieved that not all the items he wanted to sell were accepted by the auctioneers, such as some chairs, tables, and stools.

‘Like everyone else, I am just looking forward to this horrible time being over,’ he says.

‘I actually feel very lucky to have such generous friends.’

It is one of the highlights of the season. However the Victoria and Albert Museum has now cancelled its glitzy summer party in June.

‘We are extremely disappointed but hope to return with a splash in 2021,’ says museum chairman Nicholas Coleridge.

‘While we are closed do please keep in touch on social media, visit our blog or I highly recommend Secrets Of The Museum on BBC iPlayer which takes you behind the scenes at the V&A.’ 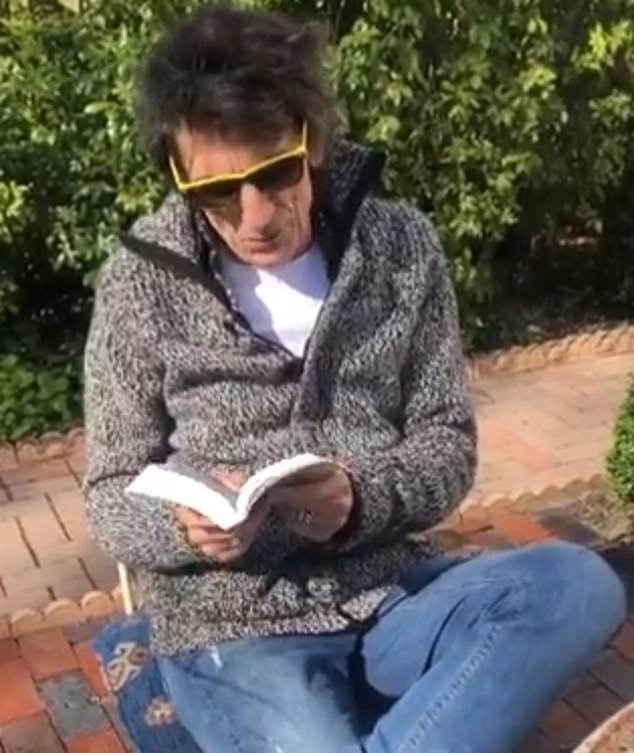 With the Stones tour on hold, Ronnie Wood is refashioning himself as a mentor for addicts unable to attend AA meetings.

The 72-year-old, who last year admitted ‘I can’t believe I’m still here’ after his years of drug and alcohol use, is reading extracts from books online for struggling addicts.

‘I hope these readings help you as much as they help me,’ he says. His first book — ‘one that helps me get through every day’ — is Keep It Simple: Daily Meditations For 12-Step Beginnings and Renewal. 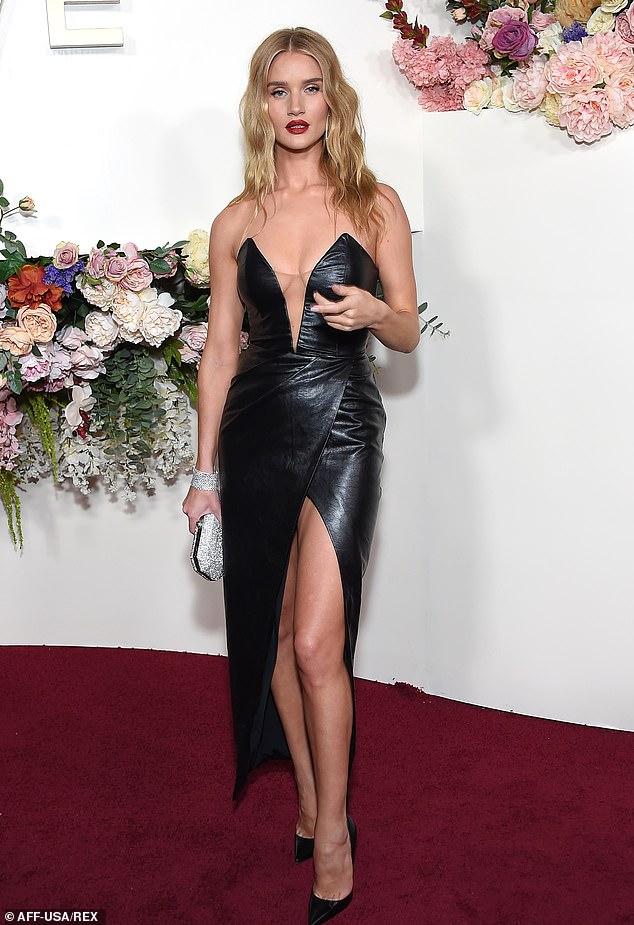 M&S lingerie model Rosie Huntington-Whiteley admits she’s likely to gain weight while self-isolating in her kitchen at home in LA.

‘I’m cooking a lot more, which may or may not be a good thing for those who have to eat it,’ says the 32-year-old, who lives with her fiance, Hollywood hardman Jason Statham, and their two-year-old son, Jack.

‘I’m cooking recipes from Jamie Oliver’s Five Ingredients cookbook because a) they use less ingredients, so less trips to the supermarket and b) they are quick and easy.

‘I have been making lots of comfort foods like roast chicken and potatoes or pasta. I’m sure I’ll come out of isolation a few pounds heavier.’

Natascha Engel, a former House of Commons deputy Speaker, describes a private meeting when the then Speaker John Bercow was ecstatic to have scored a petty victory over a minister he disliked.

Bercow shouted ‘yes!’ and brought down his fist on an empty Diet Coke can, flattening it into a perfect puck.

He then threw the squashed can over his shoulder into the bin — a perfect shot. Engel says. ‘It’s a shame that a man with so many talents was undone by his appetite for vengeance’. 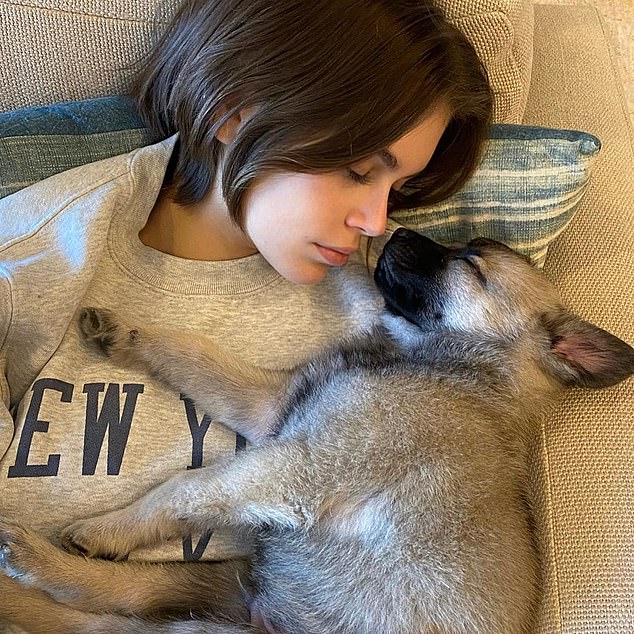 Cindy Crawford’s model daughter Kaia Gerber, 18, has adopted two puppies and posted a picture of one of them online

With no catwalks to strut down or fashion shoots to attend, Cindy Crawford’s model daughter Kaia Gerber, 18, has adopted two puppies to keep herself entertained at home in LA during the health pandemic.

Posting a picture of one of them online, whom she calls her ‘quarantine buddy’, she declares: ‘Now is a great time to foster a puppy in need!’

She acquired the two dogs from the Labelle Foundation, a non-profit organisation.

‘I couldn’t separate the brothers,’ she adds of the canine siblings.

Who would have thought it? Roger Moore’s former personal assistant has revealed the 007 star suffered from severe stage fright.

In 2001 Gareth Owen, then aged 28, became the PA to the star of seven James Bond movies.

But he reveals the actor had a surprising secret during his An Evening With Sir Roger Moore tour around the country.

‘He would always be terrified of walking out on stage,’ says Gareth.

‘He used to stand in the wings, taking very deep breaths and he’d say to me, ‘If the adrenalin doesn’t kick in, please get me off stage quick as you can.’ ‘

Actress Gillian Anderson, who is currently self-isolating with her boyfriend, The Crown writer Peter Morgan, admits they’re living off leftovers.

‘Pete and I had a dinner party a month ago and there was a flourless chocolate cake left over in the freezer,’ she says.

‘That’s pretty much what we’re living off of. It’s very rich. Even I can only have a tiny slice and that’s saying something.’

Mother polar bear rolls around in the snow with her young...