Your ordered 16 quilted toilet rolls, we’re delivering an LED home bulb instead! Supermarkets struggling to keep up with soaring delivery demands are swapping out essentials for some very unusual alternatives

Supermarkets struggling to keep up with soaring delivery demands amid the coronavirus crisis have been swapping essentials for some very unusual alternatives.

Customers have taken to social media to show the bizarre items they have been sent as demand for basic products such as toilet paper and hand sanitiser skyrockets.

One man wrote his grandparents had been sent an LED home bulb as a replacement for 16 loo rolls from Sainsbury’s.

He said: ‘Grandad’s eyes lit up when he tried it though.’

Kate Mooney from east London hit out at Tesco for sending her 93-year-old grandmother two boxes of Bonio dog treats and a free butternut squash to replace her request for Rich Tea biscuits.

Bryony Jameson blasted the retail giant for sending her mushroom soup as a substitute for diced pancetta to go in her carbonara.

And Derek Mulder was incensed the company had delivered just five out of the 32 items he had ordered, with nappies and wipes among what was missing. 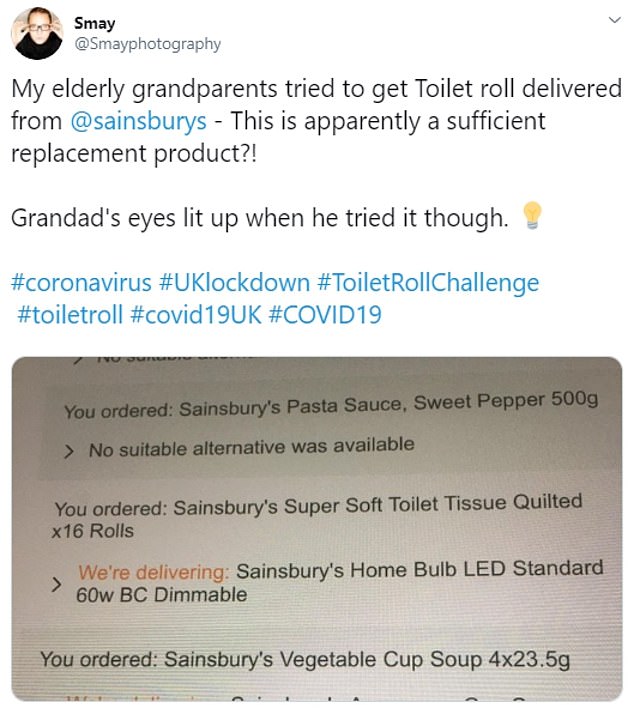 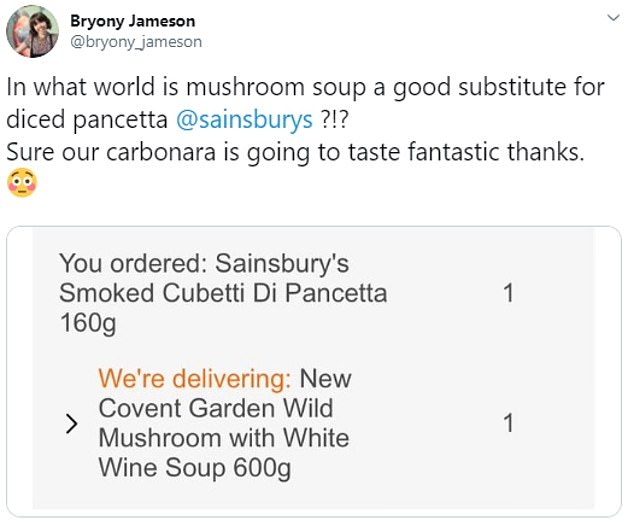 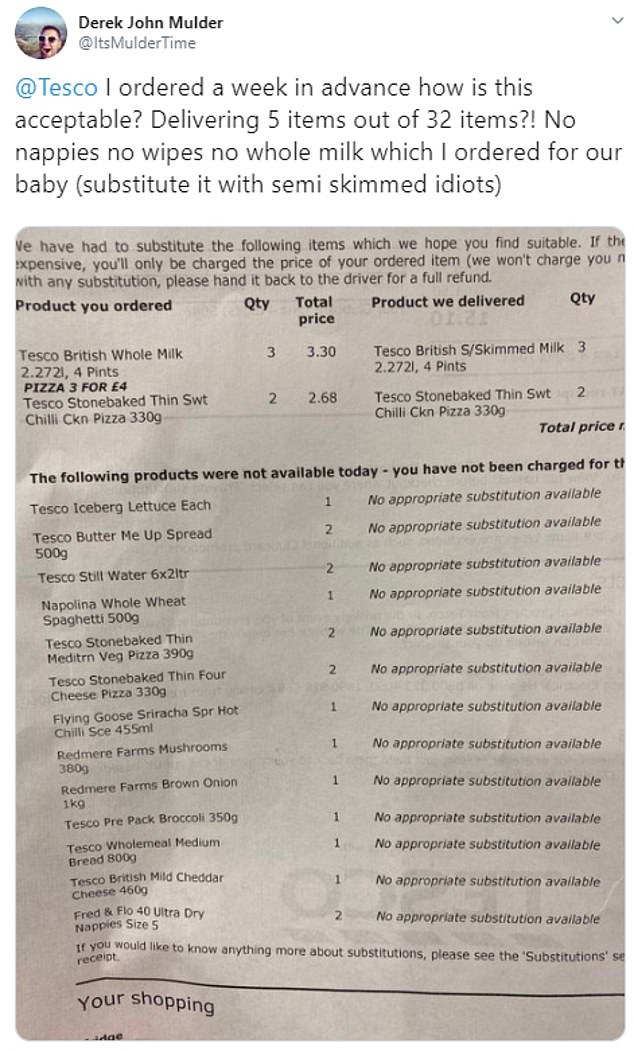 The biggest supermarket chains have dramatically stepped up rationing measures amid the frantic stockpiling as millions prepare for weeks of home quarantine.

Some stores across the country have seen ugly exchanges as people battled over household essentials and left the aisles bare. 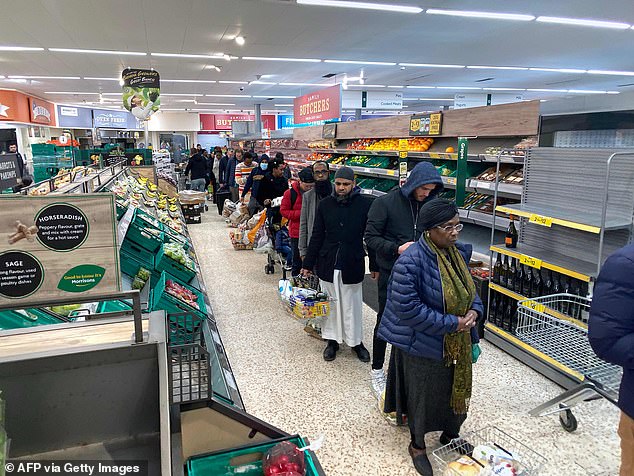 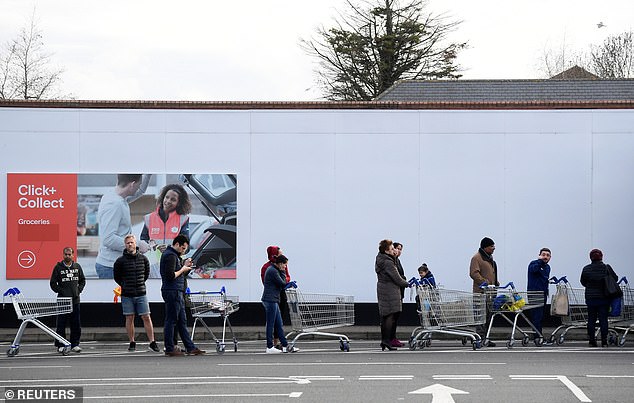 Shoppers queue to enter a Tesco supermarket in west London, as the spread of the coronavirus continues to rock Britain 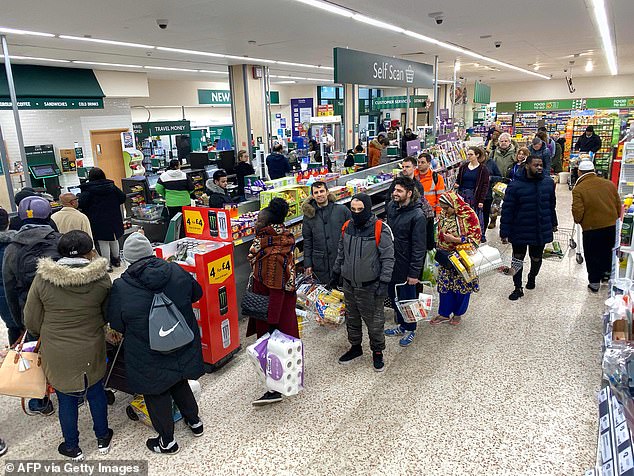 But their delivery services appear to be letting shoppers down, with Jayne Stigger somehow ending up with a whole octopus from Tesco when she wanted a walnut loaf.

Sarah Parsons tried to buy cucumber, bleach and toilet roll but was left with a courgette, carpet floor cleaner and a pack of tissues.

And Anna Murphy paid a staggering £7 to get a Dairy Milk Daim bar and Surf detergent delivered after her other items run out. 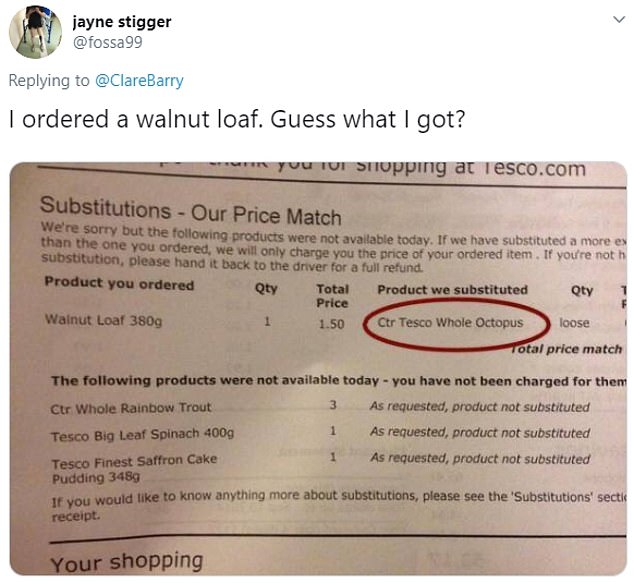 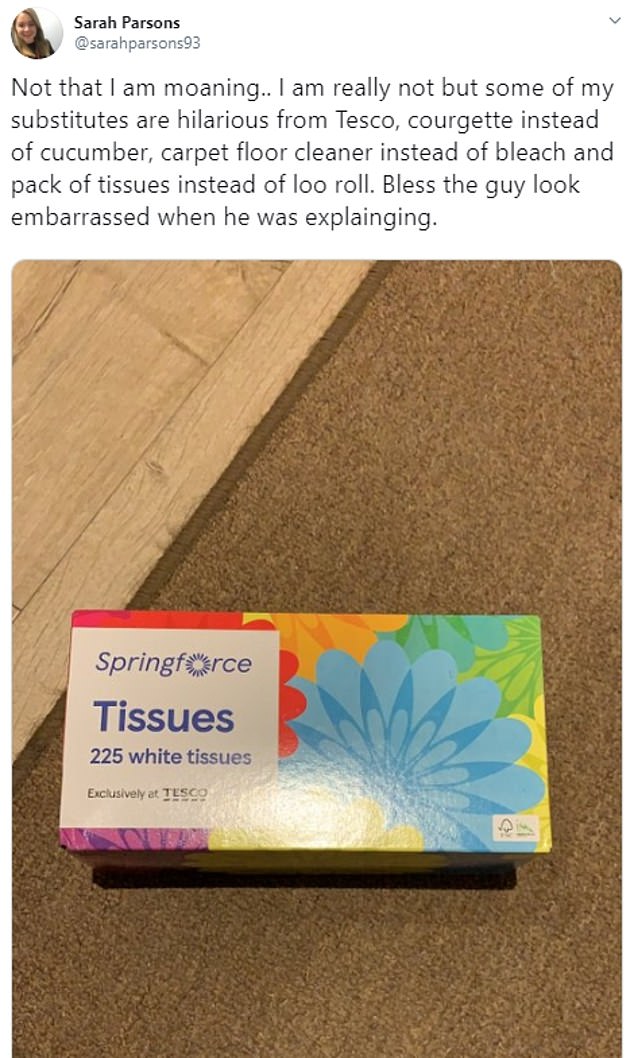 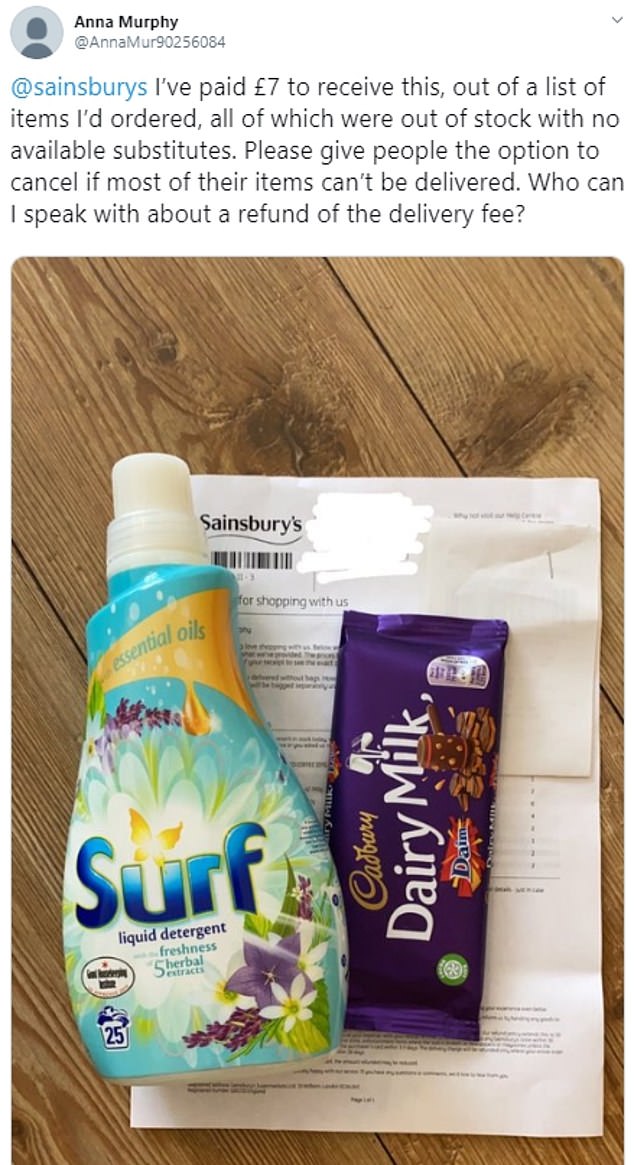 Delivery services appear to be letting shoppers down, with Jayne Stigger somehow ending up with a whole octopus from Tesco when she wanted a walnut loaf

The two superstores, along with Asda, have imposed limits of three items per customer across all food and grocery products.

Ocado had to shut its website and app until Saturday after being swamped with orders to people’s homes.

Supermarkets have even held emergency talks with police to ensure urgent help amid concerns aggressive shoppers have left staff fearing for their safety.

The incidents raise worries the country could see the emergence of food riots that were controversially predicted at the beginning of the crisis. 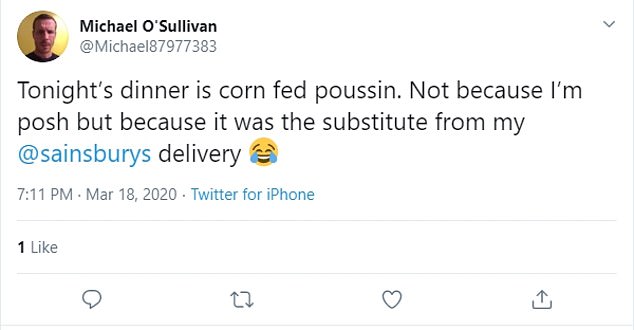 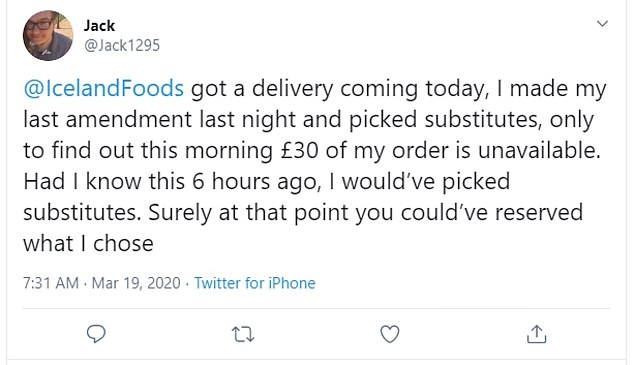 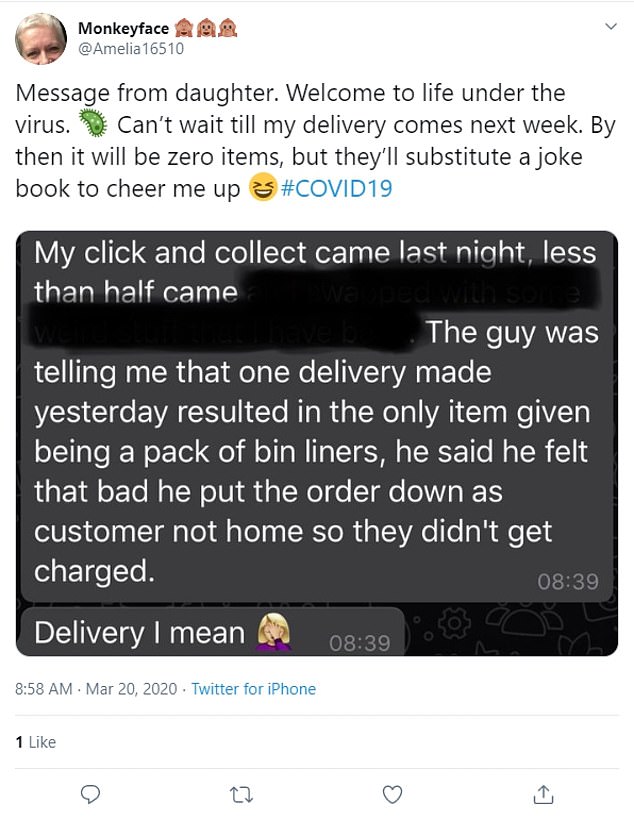 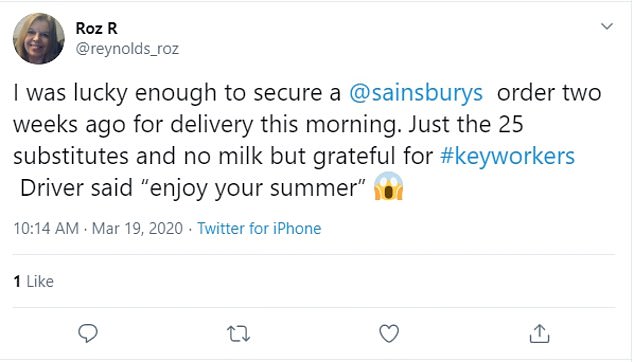 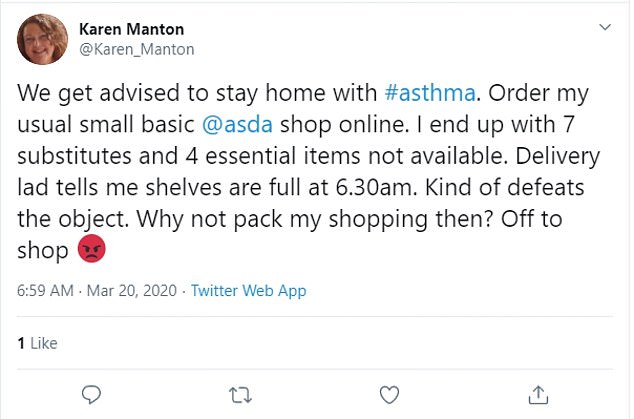 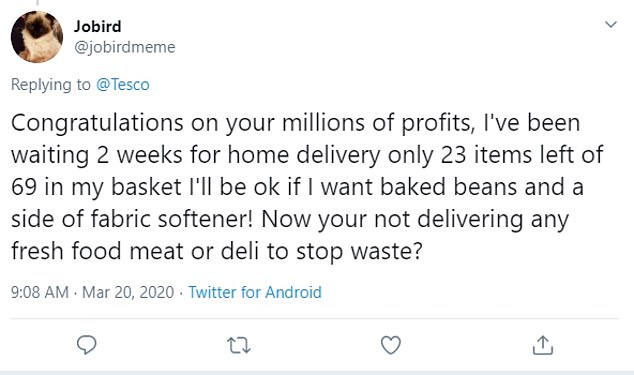 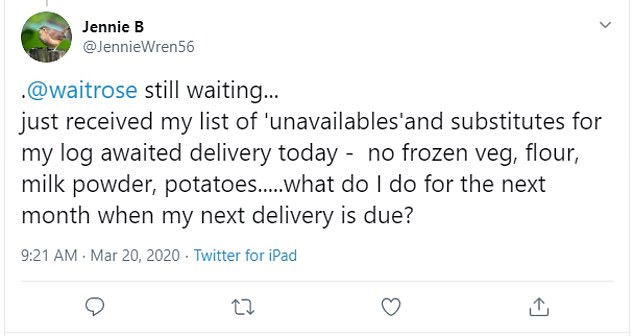 Jack’s Law: How can you be forced straight back to work after losing a child?