Distraught residents watching their properties crumble as the ground sinks could be waiting months for repairs as authorities squabble over who is to blame.

Jordan Springs East, a new development in Llandilo, near Penrith in Sydney’s west, is in such crisis the local council slapped notices on 841 homes, worth $605 million, warning would-be buyers.

The ground is allegedly built on insufficiently compacted landfill – causing it to sink by up to a foot in some areas in just the past few years – with unknown long-term effects.

Properties have suffered sunken driveways, cracked brickwork, walls, and concrete slabs, and a sinkhole opened up in the middle of the road that took months to fix. 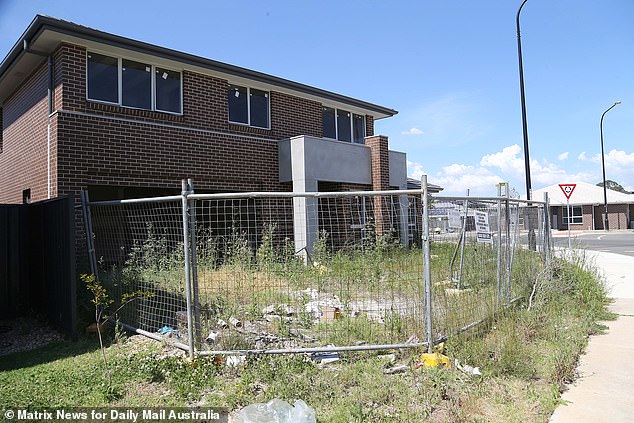 This house in Jordan Springs East, a new development in Llandilo, near Penrith in Sydney’s west, has been left to rot for years as it is so badly damaged by sinking ground

But Penrith Council said further investigations are needed to confirm the exact cause of the sinking, meaning ‘a clearer understanding of the extent of the fill of relative compaction maybe some months away’.

‘Our investigations are continuing and will include an assessment of public assets across the Jordan Springs East precinct, such as roads and footpaths, including the impact that fill of low relative compaction may have on the life expectancy of these assets and relevant maintenance costs,’ a council spokesman told the Daily Telegraph.

Tensions over who is at fault between the council and developer Lendlease continue to escalate, with the council taking aim at private certification system which hinders their ability to police developments.

‘Council believes that the inherent conflicts with private certification in some cases need to be fixed as a matter of priority to mitigate the risks arising from those conflicts,’ a spokesman said.

Meanwhile, Lendlease is calling on the council to remove notices on houses that have not been affected amid fears the reputational damage will further devalue properties.

Homeowners have been urging the council to remove ‘notations’ or official subsidence warnings to prospective homebuyers as soon as possible, with experts employed by Lendlease estimating only 90 homes are affected. 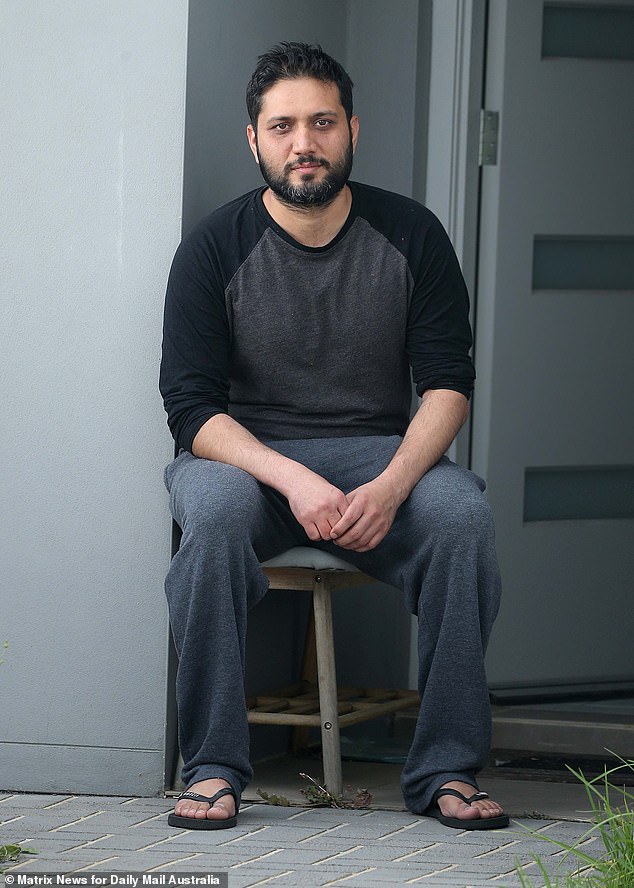 Next door, Amit Vohra, 35, had his whole front yard sink almost a foot within months of him moving there in June 2018

‘We’re urging council to provide clarity to customers around the removal of the notation from properties which are not impacted, and we remain committed to working with council for the benefit of our customers,’ Lendlease senior development manager Kevin Montier said.

However, the council said the crisis requires a complex investigation overseen by numerous experts over coming months.

Amit Vohra, 35, had his whole front yard sink about 18cm within months of him moving there in June 2018, wrecking his driveway and putting dents in his lawn.

The problem was finally fixed earlier this year with developer Lendlease relaying his entire front and giving him a new driveway.

But the IT engineer said he was still worried about the future and what else could go wrong with his Navy Road home. 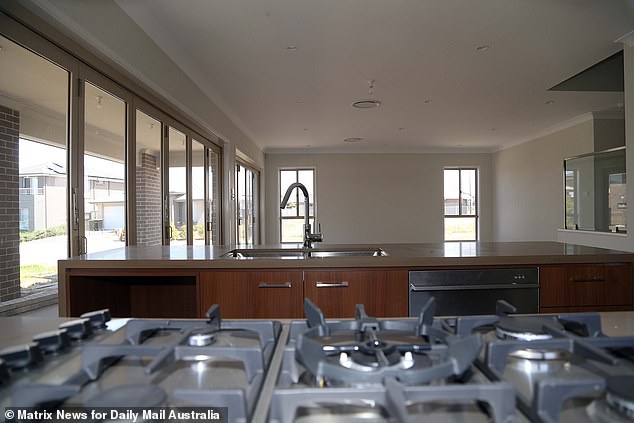 The house next door to him has been left to rot due to huge cracking problems, with weeds growing around it and a brand new kitchen (pictured) gathering dust 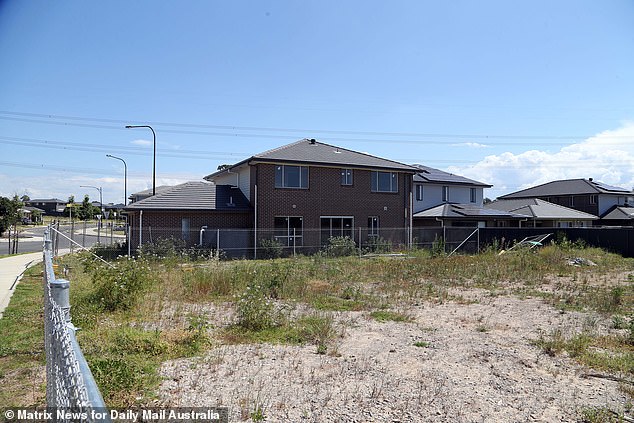 Over the road on Armoury Road, four homes were demolished – three still vacant blocks (pictured is one of them)

‘We put our life savings into this house so I’m anxious and scared that we will get cracks in our walls or the driveway will sink again,’ he told Daily Mail Australia.

Mr Vohra with his pregnant wife and 18-month-old son, live at the epicentre of the crisis engulfing the suburb.

The house next door to him has been left to rot due to huge cracking problems, with weeds growing around it and a brand new kitchen gathering dust.

He said the house was like that when he moved in, and even before that while his home was still being built.

Over the road on Armoury Road, four homes were demolished – three still vacant blocks – and a huge hole opened up in the road that took months to fix.

‘My real estate friend tells me the value of my house will already have gone down and I don’t know if it will recover with the suburb like this,’ he said.

A few doors down on Navy Road, Suman Saini and Sandeep Kumar had similar problems with their driveway that are yet to be properly fixed.

The ground sunk about a foot, so far it exposed the bottom of the driveway slab and took the couple two tonnes of soil to fill in. 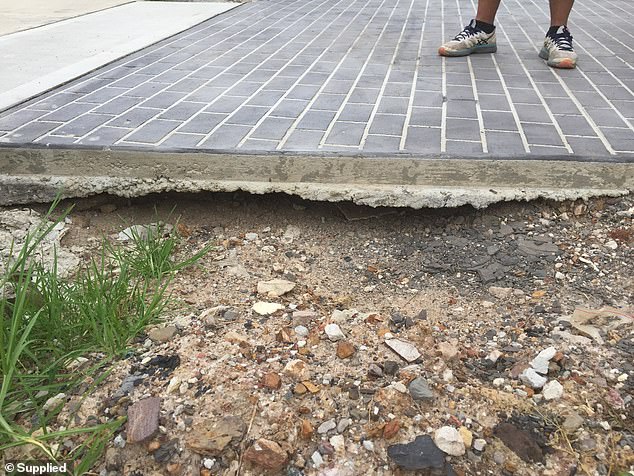 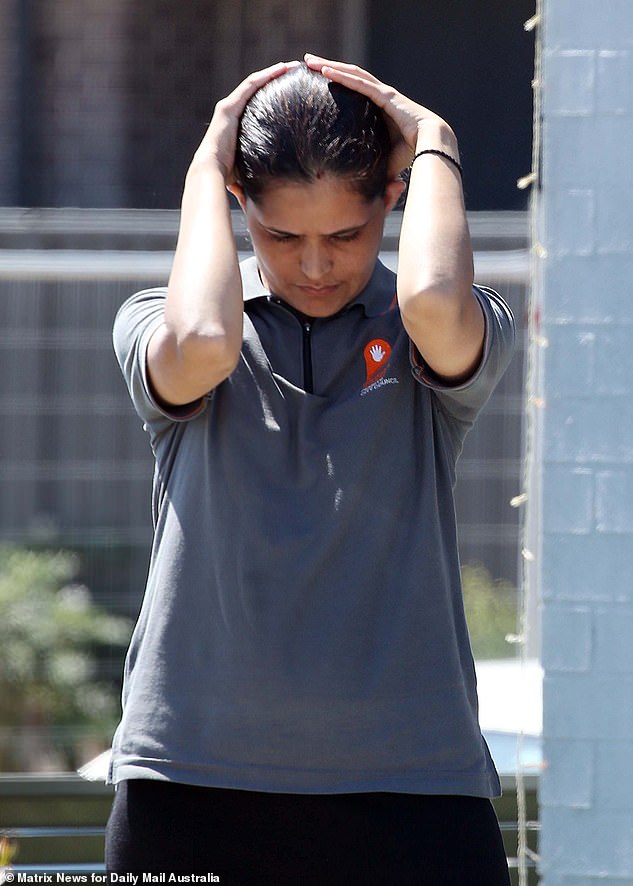 ‘We’re just so sick of it, we don’t know what’s going to happen next or what will go wrong in the future,’ Ms Saini said

They still have to put more decorative stones into parts of the garden bed bordering the driveway every time they do any gardening as it keeps sinking.

‘We’re just so sick of it, we don’t know what’s going to happen next or what will go wrong in the future,’ Ms Saini said.

Jaymie Murphy there were problems with her home on nearby Private Circuit – two doors from one of the demolished houses – that were fixed before she moved in.

However, she was worried other problems could crop up in the future, and that the crisis would send house prices through the floor for years to come.

‘My husband has stage four cancer and only a year to live, so this is his last house,’ she said.

‘It would be a disaster for us if anything else went wrong, I don’t know what we would do. All we can do is cross out fingers and try to be optimistic.

‘It’s such a shame for the whole suburb because it’s a really nice area with a great community.’ 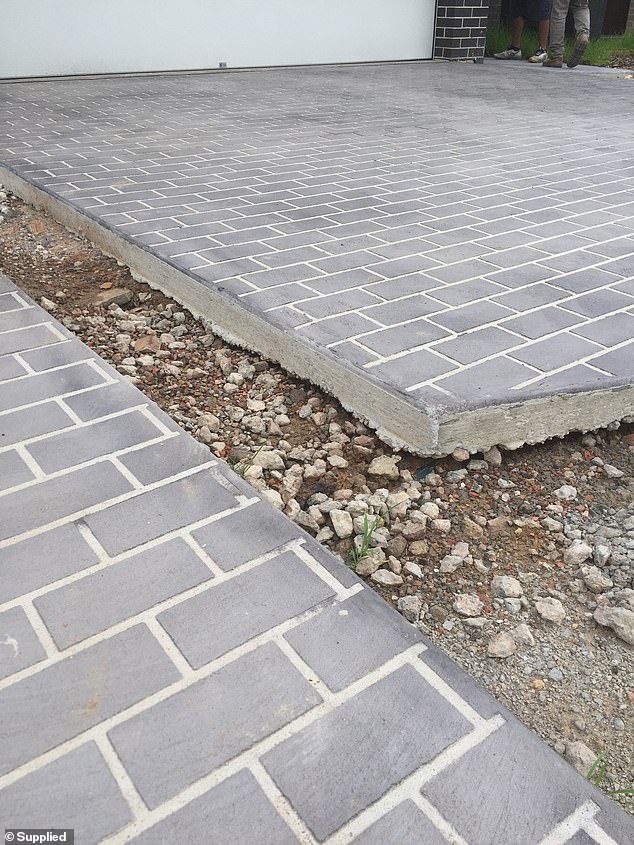 Even after they dumped soil in to refill it, they still have to put more decorative stones into parts of the garden bed bordering the driveway every time they do any gardening as it keeps sinking (pictured at its worst) 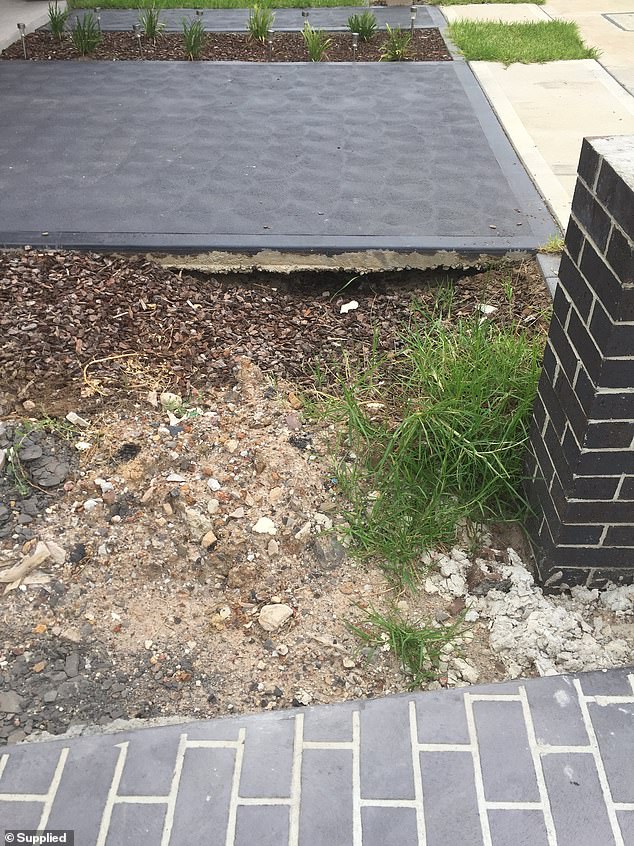 Ms Murphy said a friend in the next street had a host of problems with her new two-storey home that overlooked a pond and marshland on the end of the development.

‘She was just destroyed, they had cracks all through the house and overflowing sewage – the whole backyard was flooded. She’s still distraught about it,’ she recalled.

Back on Navy Road, young dad Rahul Gupta said he spent $13,000 landscaping his backyard just 10 months ago, only for parts of it to sink and make the lawn uneven.

‘I spent all my money designing and building my dream house and look what happens. All I wanted was a nice backyard,’ he said.

Mr Gupta’s toddler son wears a padded helmet so he doesn’t hurt himself. ‘I’m worried about my kids falling over on the uneven ground in the backyard. I need it fixed,’ he said. 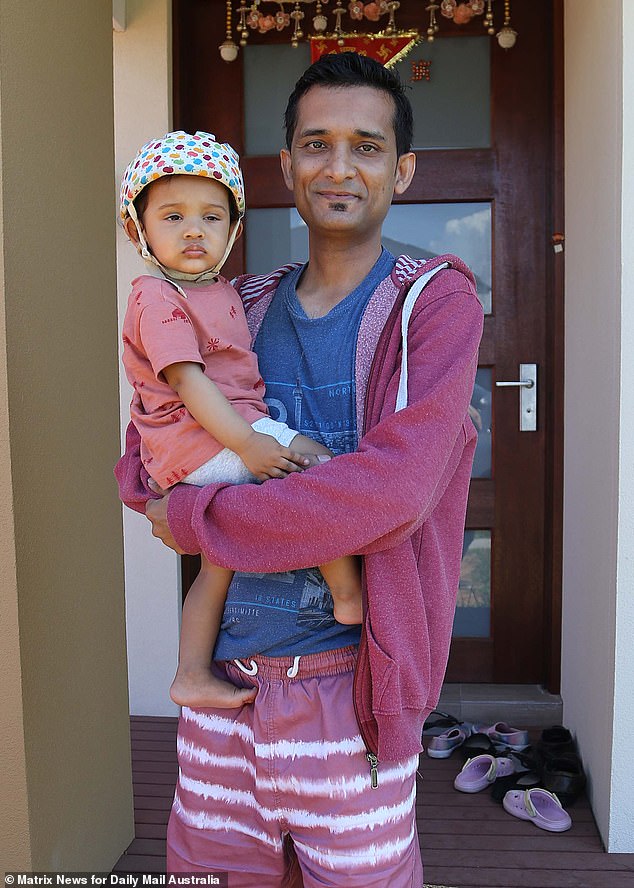 Young dad Rahul Gupta said he spent $13,000 landscaping his backyard just 10 months ago, only for parts of it to sink and make the lawn uneven 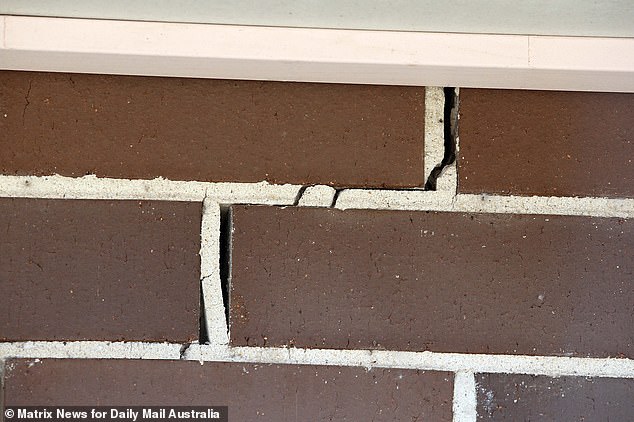 Cracks visible in the brickwork of a house in Jordan Springs East development, which is beset by structural problems 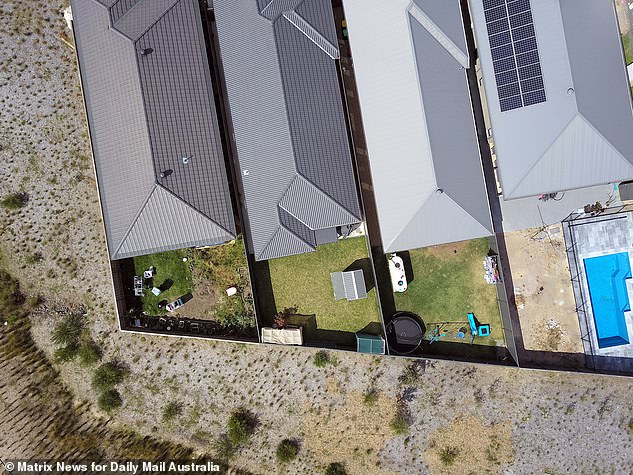 His neighbour Harshana Wrasigne also had several small cracks in the internal walks of his home and garage.

Over the road, workers drilled deep holes in the ground of a vacant block where a house was demolished, to fill with concrete in a technique that stabilises the foundation – in the hope of preventing further issues.

Numerous homeowners in surrounding streets have signed non-disclosure agreements with Lendlease while they try to negotiate fixes and compensation for the damage.

One of them said he had lived there for two years and now there were cracks in the walls, garage, supporting columns, and the driveway.

Some have given up and sold out, with a real estate company for sale sign lying on the front lawn under a wheelie bin having just been sold to another buyer. 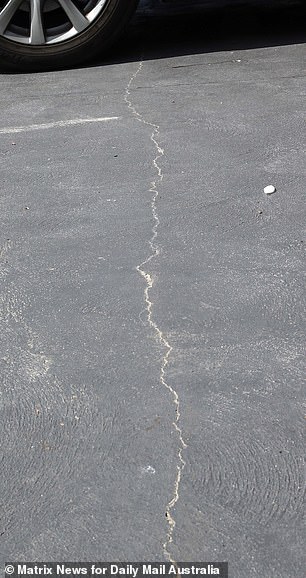 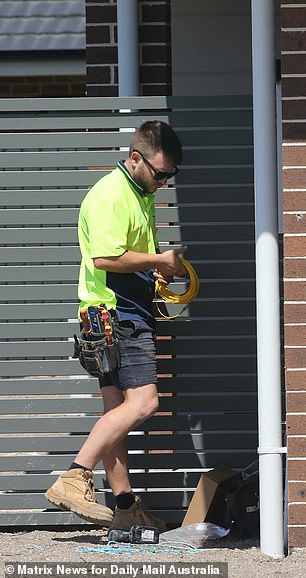 Cracks in a driveway on a street off Navy Road are just some of the damage to the house, while on another property a tradie works on a nearly completed building 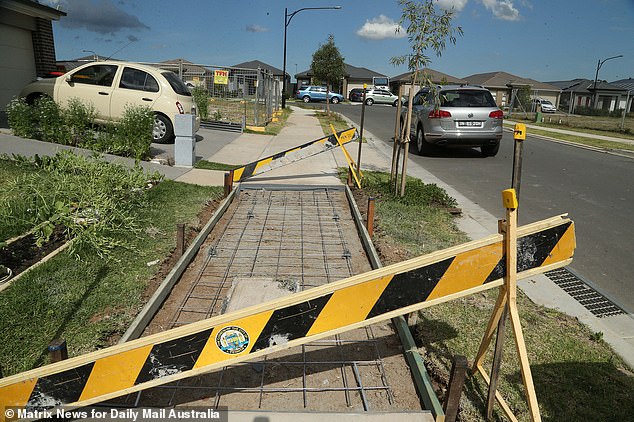 Only 30 houses, centred around Armoury and Navy, were initially believed to be affected, but Penrith Council continues to expand the number of homes with planning warning certificates.

The warnings, which in September was increased from 195 to 841 houses, state that the council is investigating ‘fill of low relative compaction’ under property foundations.

Jordan Springs East was built on swampland and an old creek bed, and is on a floodplain. To reclaim the land for development, soil and other materials are added on top.

However, the developers allegedly used bigger rocks instead of finer soil, and then didn’t wait long enough for the rocks to settle and stop compacting before starting to build.

Lendlease said the issue was made worse by heavy rain in late 2018 and early 2019 that caused a temporary detention basin to rise due to a blockage. 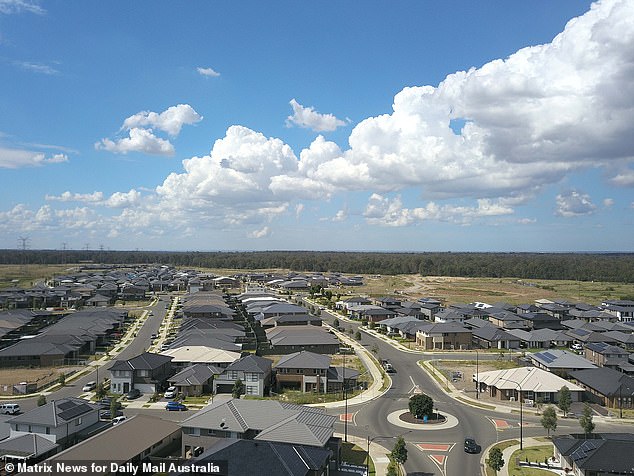 The epicentre of the problem in Jordan Springs East is around this intersection – Armoury Road and Navy Road. Vacant lots where houses have been demolished are visible while on the top right of the intersection a new house is being rebuilt where one was knocked down 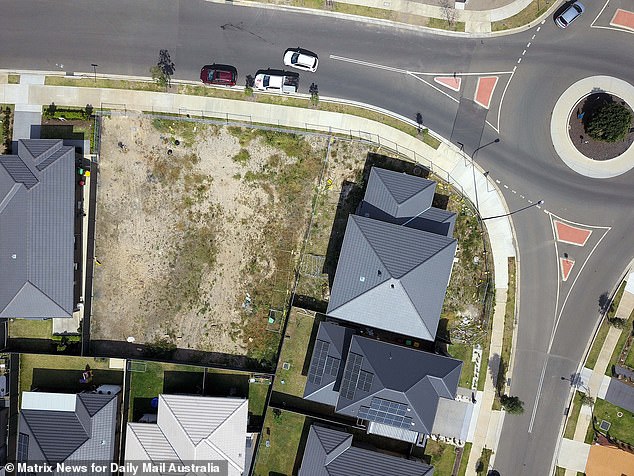 One of the demolished blocks is seen from the air, with the fenced-off ruined house to the right and Mr Vohra’s home behind that 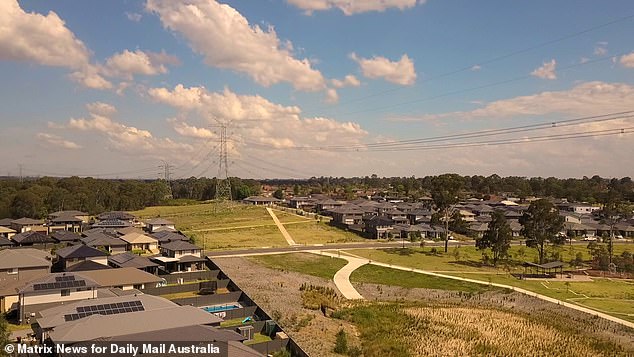 Four homes have been knocked down due to extreme cracking, one of which is being rebuilt, and another has been left abandoned for almost three years.

Penrith Mayor Karen McKeown said she had a ‘moral and legal obligation’ to tell homeowners about the possibility of structural damage to their property.

She said the council commissioned an independent geotechnical assessment despite getting a report from Lendlease.

‘Council is aware that such notations may be of concern to some homeowners and wants to assure them that the decision to take this course of action was taken only after extensive professional assessment and in the best interests of all property owners,’ she said. 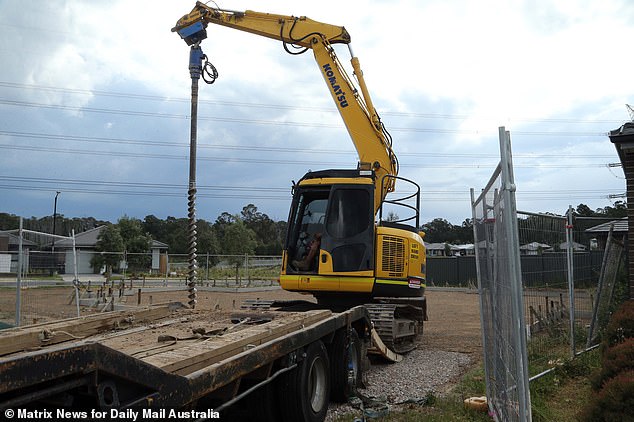 Workers drilled deep holes in the ground of a vacant block where a house was demolished, to fill with concrete in a technique that stabilises the foundation – in the hope of preventing further issues 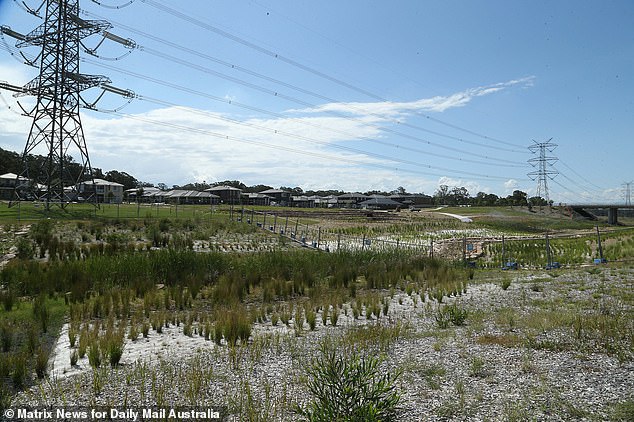 Jordan Springs East was built on swampland and an old creek bed, and is on a floodplain. To reclaim the land for development, soil and other materials are added on top 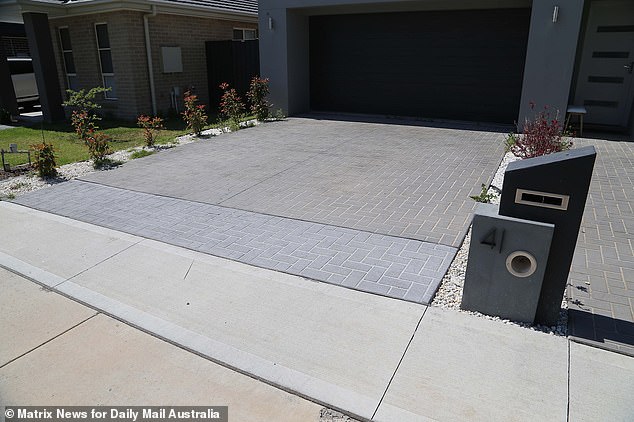 ‘We’re disappointed Penrith City Council has acted prematurely by placing a notation on the planning certificates of 841 properties… while the investigations requested by Council’s experts are ongoing.’

He insisted the company did its own testing with results that were ‘supported by two of Australia’s top geotechnical experts’ and the council’s actions were far broader than appropriate.

Mr Montier said the company set up a compensation scheme with Fair Trading to support impacted homeowners in the area around that section of Armoury Road and side streets coming off it.

Lendlease earlier this year said it would pay for any repairs due to ground settlement over the next 15 years.