Thousands of Australians have ignored social distancing advice by hitting the waves at Bondi Beach.

Beachgoers flocked to the eastern suburbs as Sydney enjoyed blue skies and sweltered through 36C heat on Friday.

But sunbathers ignored 1.5 metre social distancing guidelines as they lay together on the sand and helped each other apply sunscreen.

The crowds were seemingly unfazed by the threat of coronavirus as they embraced on the shoreline, splashed in the waves and played beach volleyball.

New South Wales Health Minister Brad Hazzard said the ‘thousands of people’ who gathered at Bondi should be following the 1.5 metre recommendation.

‘We are in a different time,’ he said on Friday.

‘We need to behave in different ways and that is to keep your distance. The recommendation is at least 1.5 metres. That is a sensible recommendation that people should sensibly take on board.’

While residents can ‘by all means’ visit the beach, they must stick to the strict advice given by health authorities.

‘I would just say that it doesn’t matter where you are. Whether you are on Bondi or in a church, separate by 1.5 metres,’ Mr Hazzard said. 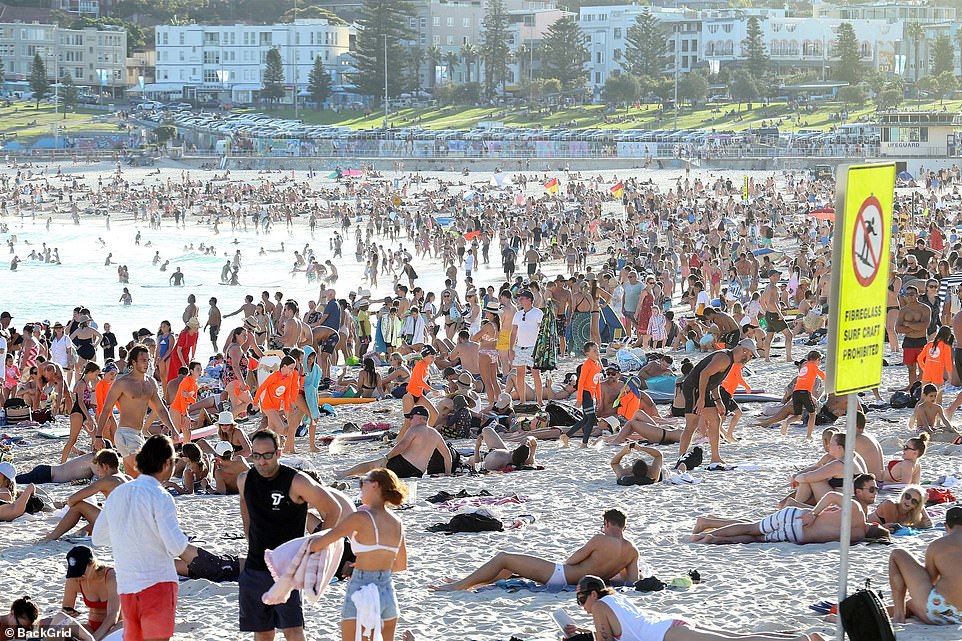 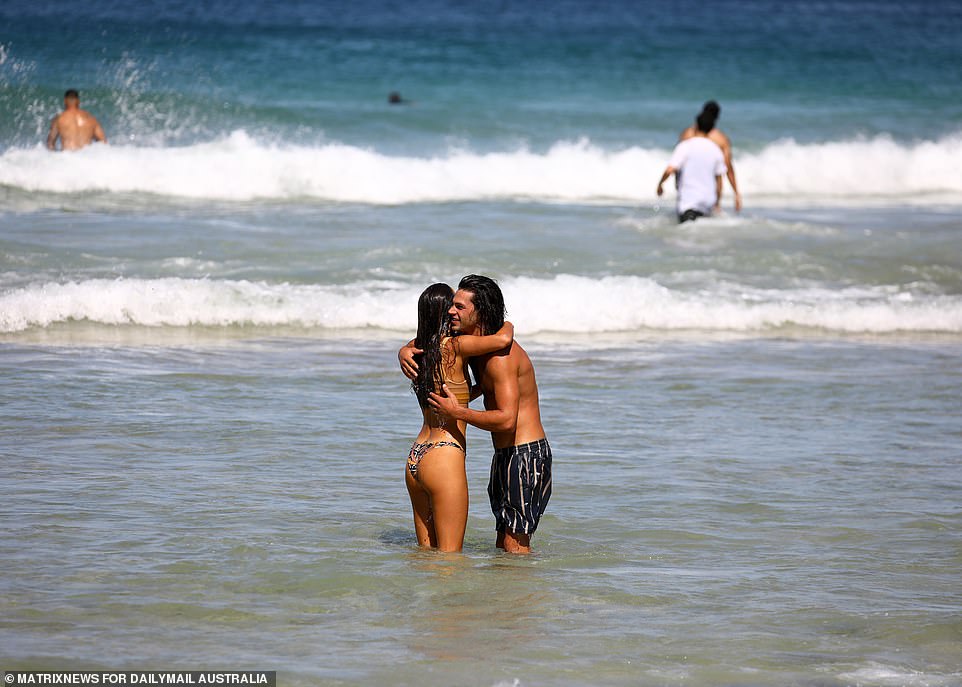 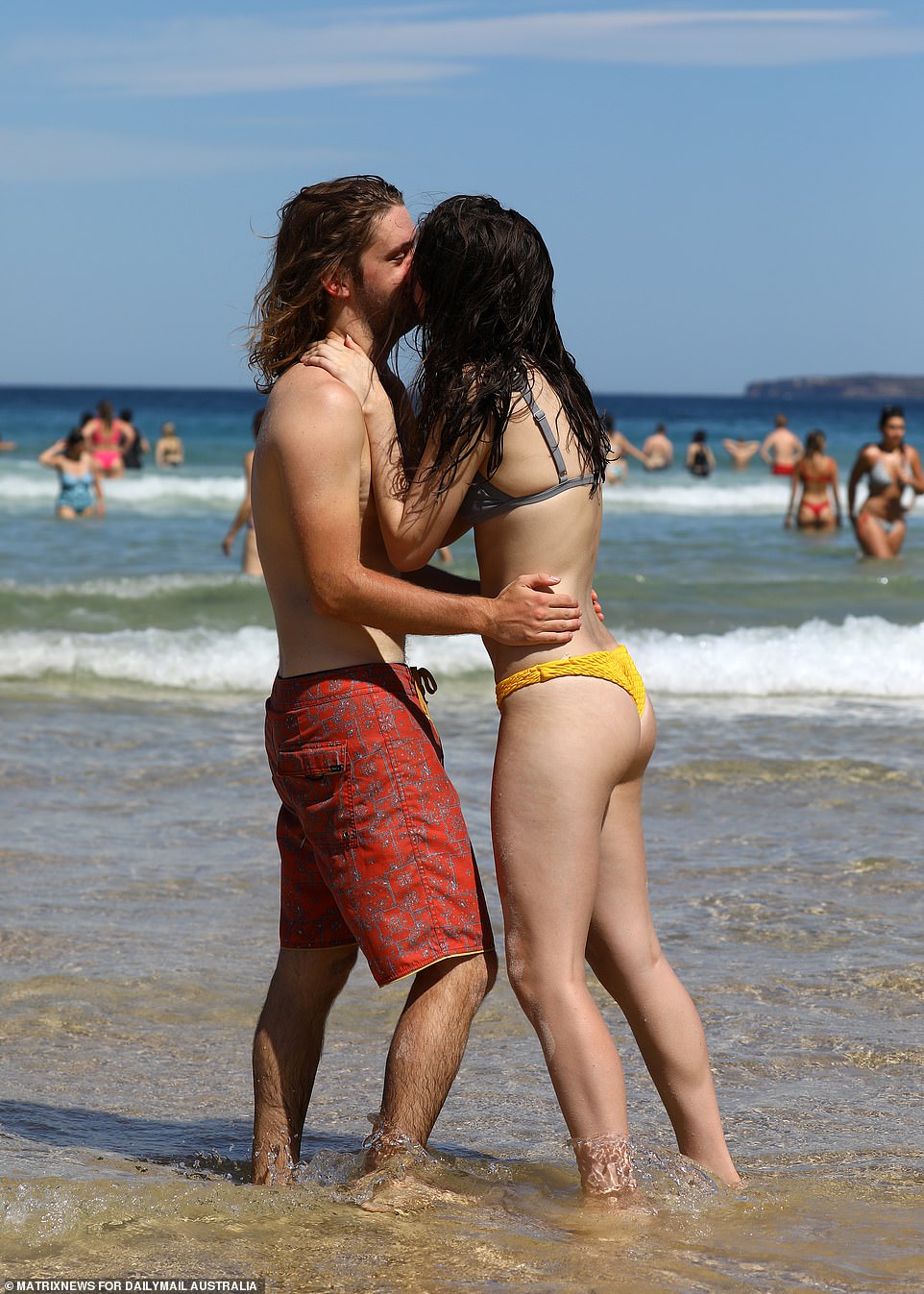 A couple embrace at Bondi Beach, in Sydney’s eastern suburbs, on Friday as the temperature soars above 30C 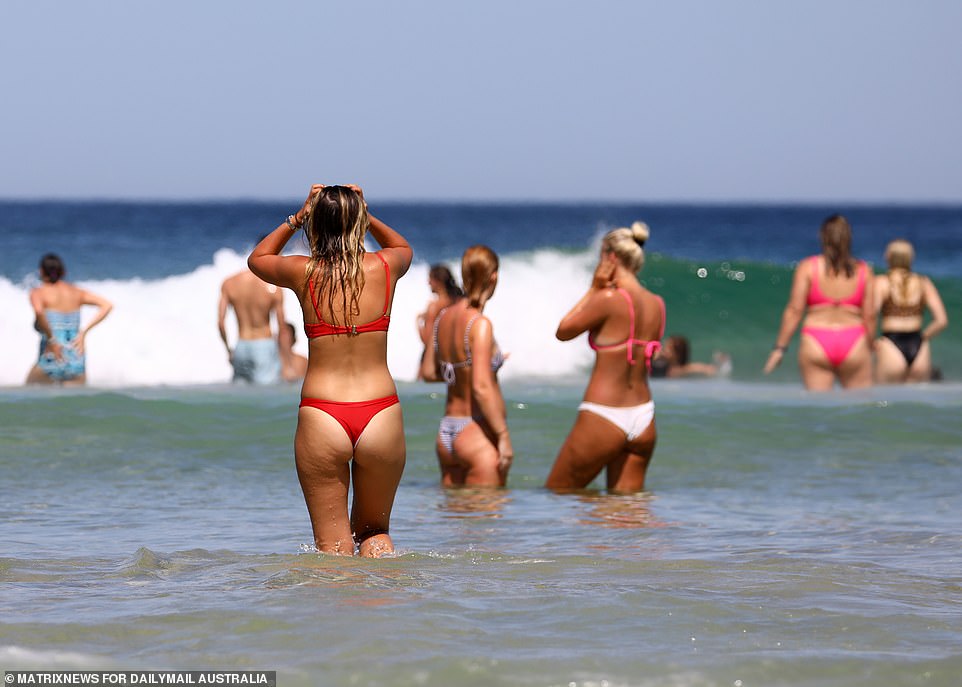 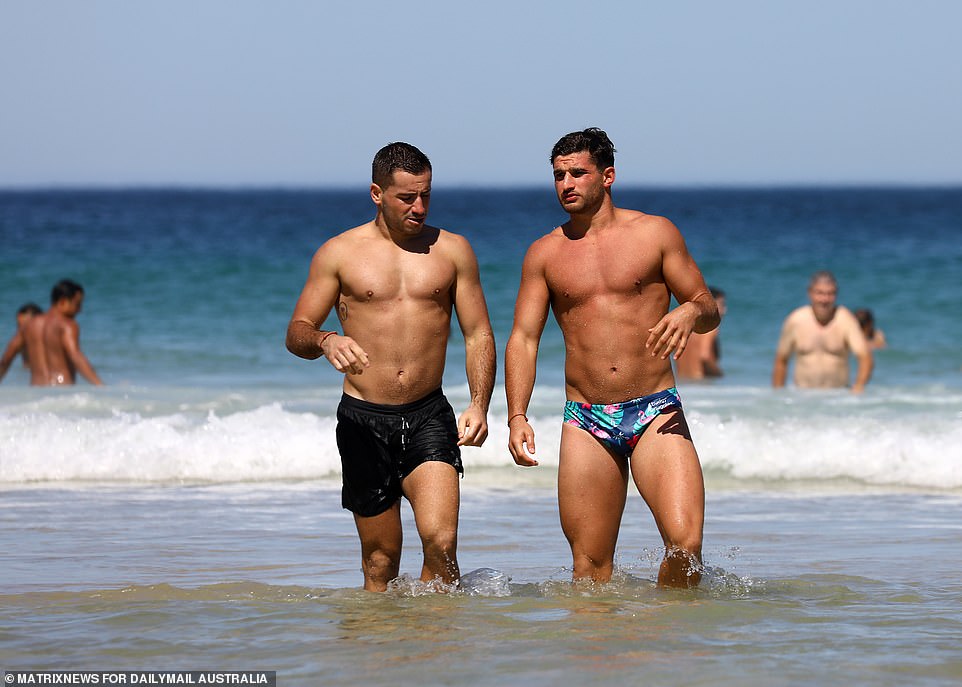 Two men stand less than the recommended 1.5 metres apart as they leave the water on Friday 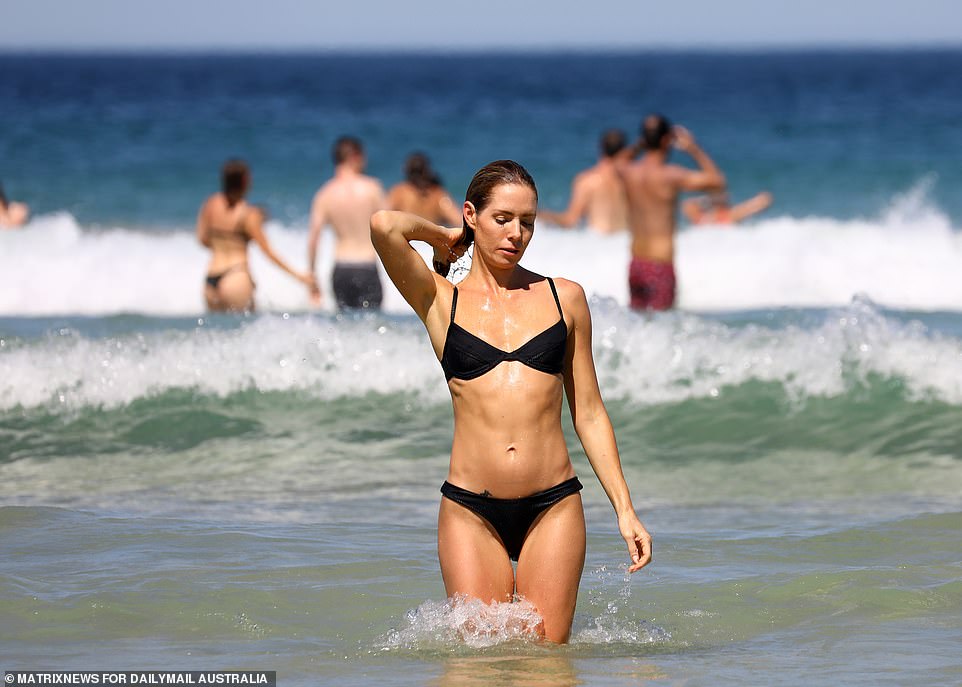 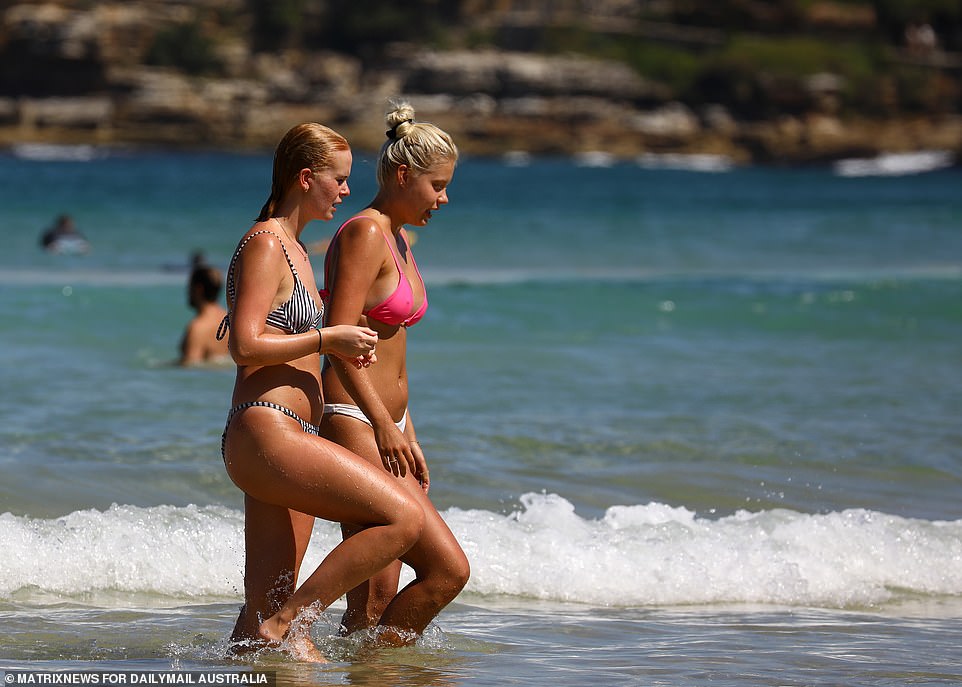 Two friends dip their feet in the water at Sydney’s Bondi Beach on Friday, despite guidelines to exercise social distancing

Government advice reads: ‘Social distancing is important because COVID-19 is most likely to spread from person-to-person.’

‘So, the more space between you and others, the harder it is for the virus to spread.’

The crowds come as Australia prepares to lock its borders to non-residents at 9pm on Friday in a desperate attempt to stop the spread of COVID-19.

Residents are encouraged to stay at home and avoid crowds to combat the outbreak, as the number of confirmed cases surge past 850.

An 81-year-old with coronavirus was the seventh Australian to die from the pandemic on Thursday.

Outdoor events with more than 500 people have been banned, while indoor gatherings have been restricted to 100 people.

The tougher rules came with stronger language from chief medical officer Brendan Murphy, who said everyone should be distancing themselves from every fellow Australian where possible.

‘It’s no point having a gathering of 20 people if it’s in a tiny room and you’re all together,’ he told reporters. 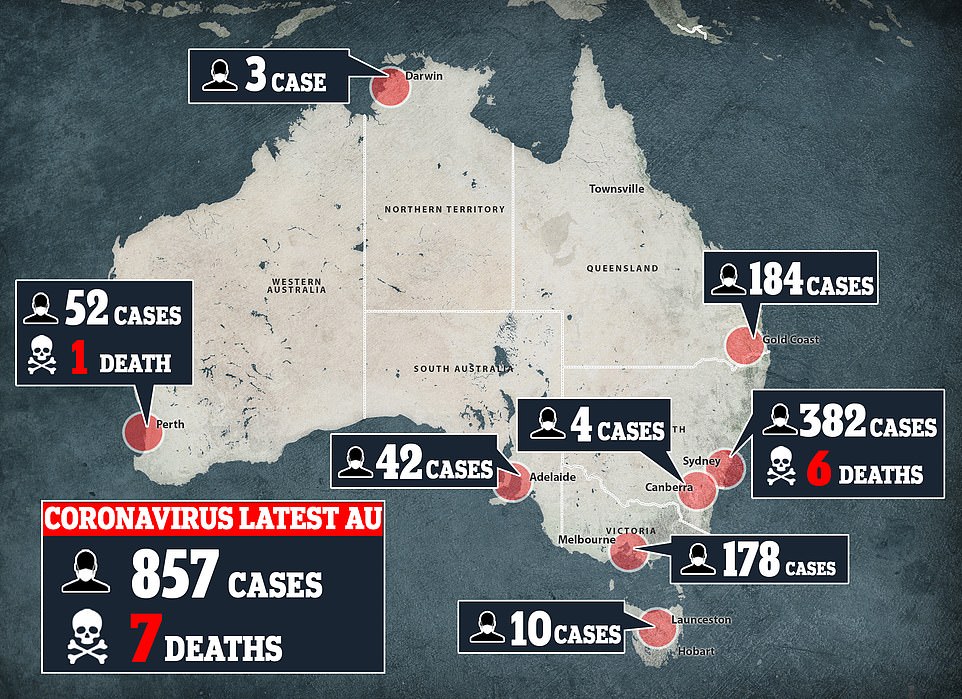 Residents are encouraged to stay at home and avoid crowds to combat the outbreak, as the number of confirmed cases surge past 850 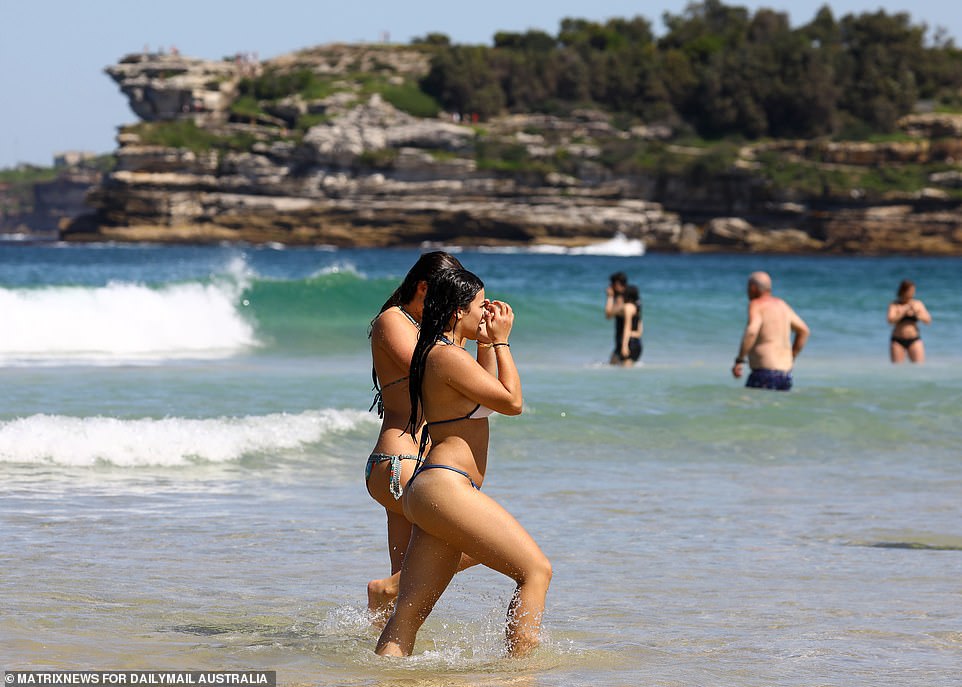 ‘Social distancing is important because COVID-19 is most likely to spread from person-to-person,’ government advice reads. ‘So, the more space between you and others, the harder it is for the virus to spread.’ 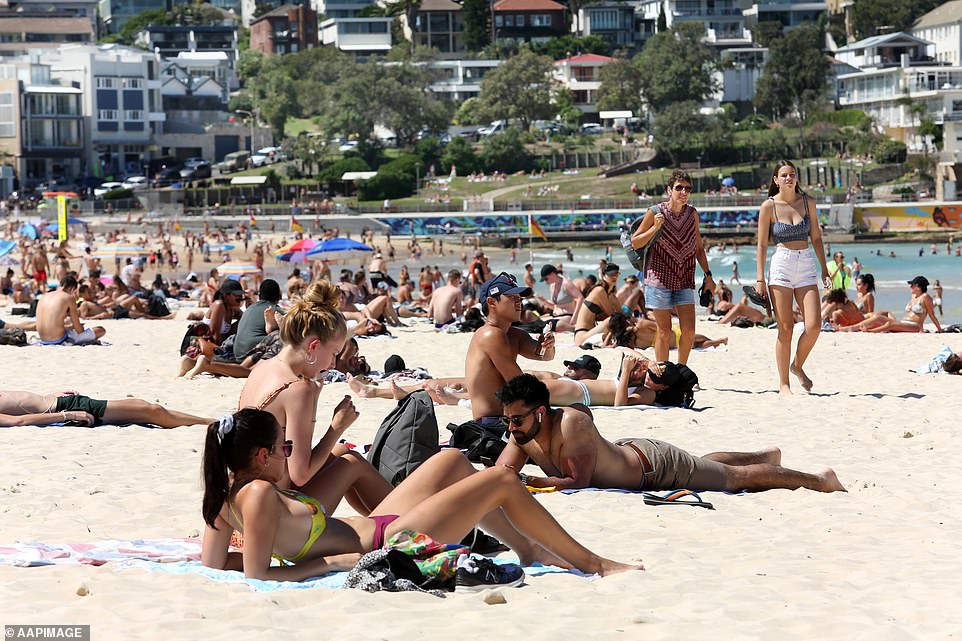 Sunbathers ignored 1.5 metre social distancing guidelines by helping each other apply sunscreen and lying together on the sand 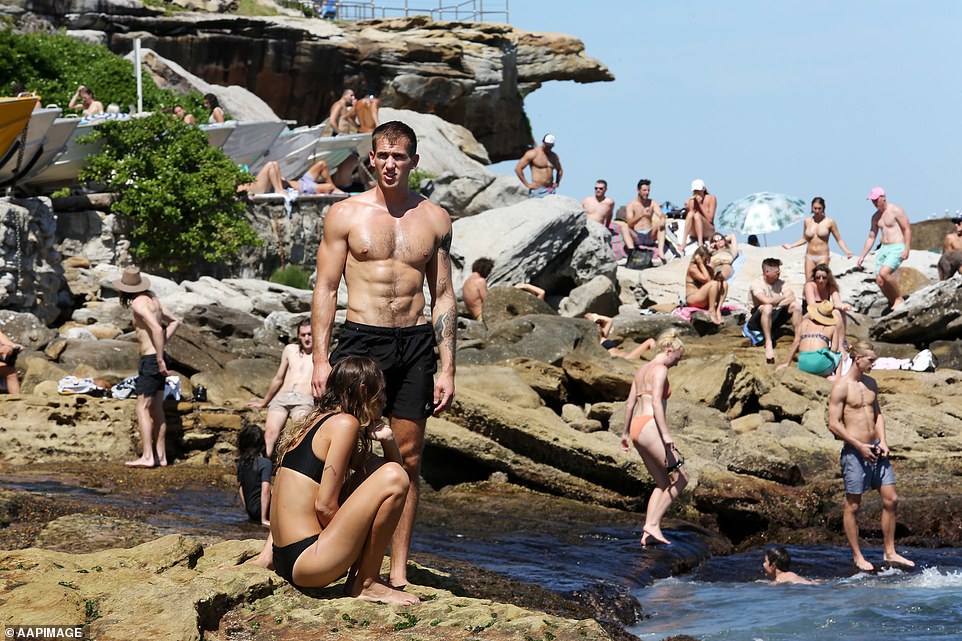 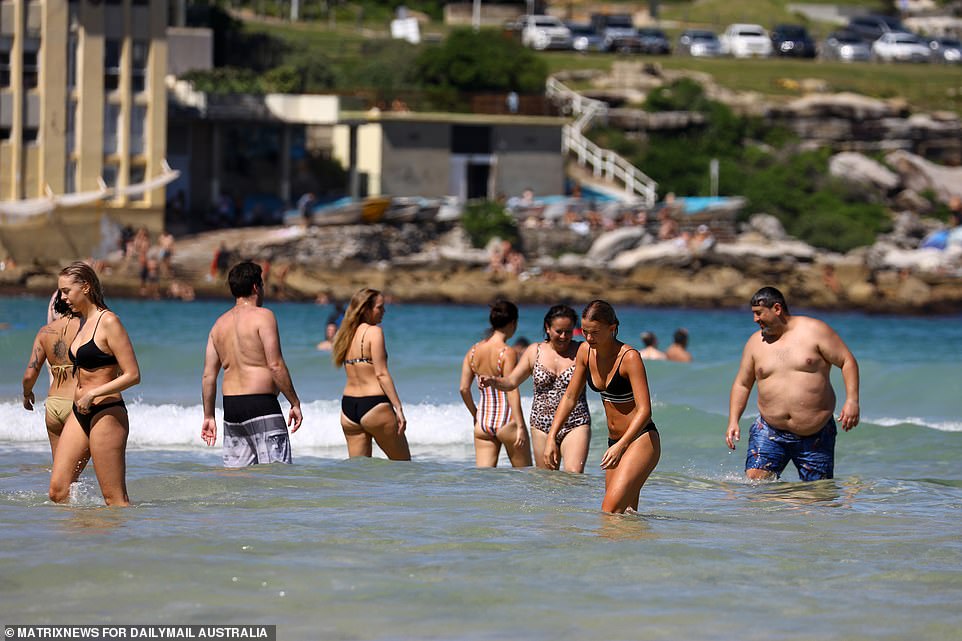 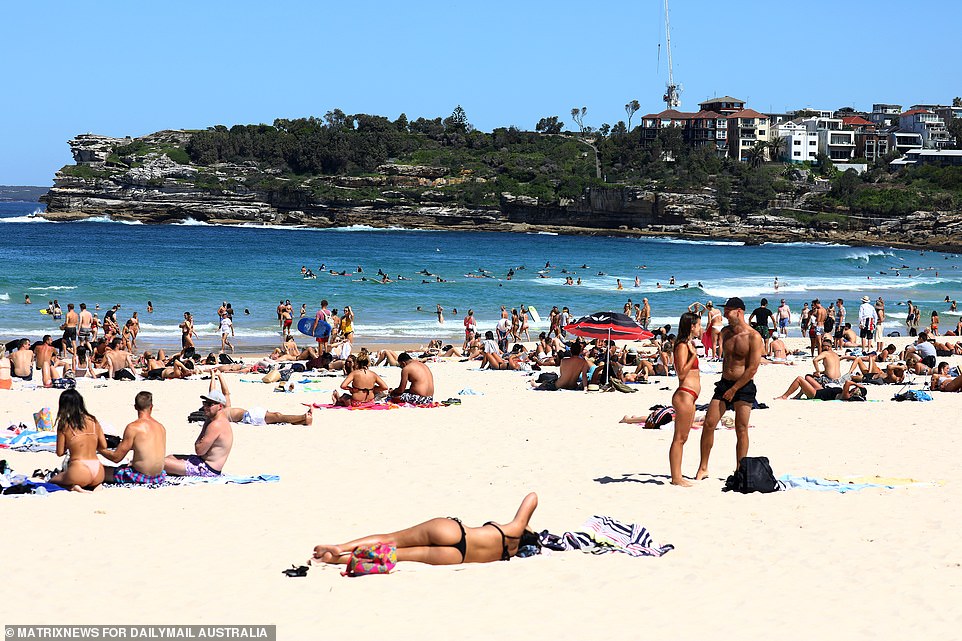 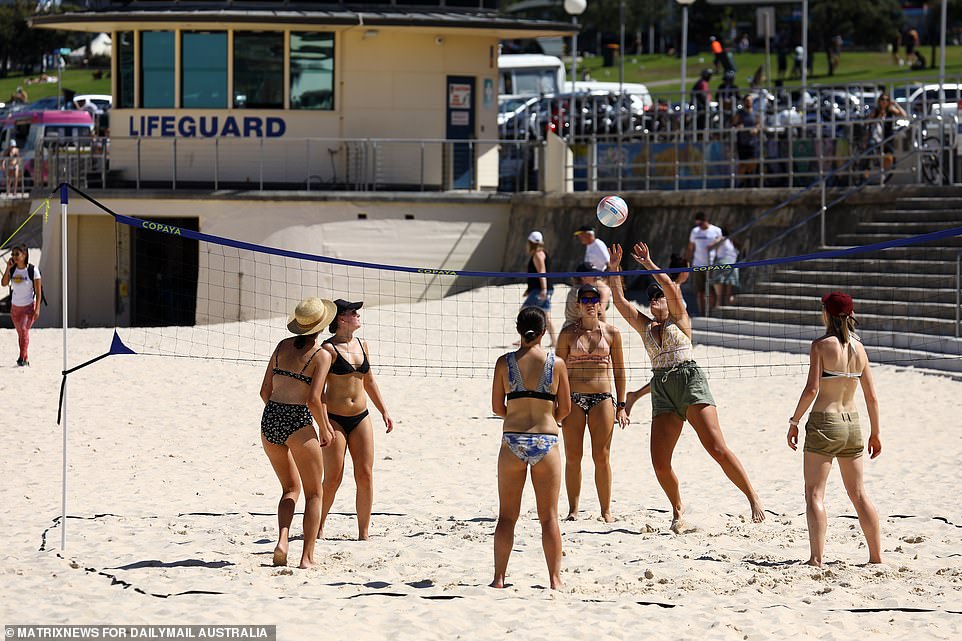 Social distancing means keeping a metre-and-a-half away from others, good hand hygiene, and staying home from work or the general community if you are unwell.

‘There will be cases of community contact where it’s not suspected and they might just get a sniffle or a cold, the sort of thing that many of us have soldiered through and gone to work in recent years – we can’t do that any more,’ Professor Murphy said.

‘There is a risk that if we don’t do what every one of us has to do as our civic duty to control this spread, it will grow significantly greater.

American backpackers at Australia’s most famous beach said they had been socialising together without regard for the 1.5m social distancing rule.

Lauren Titone said the group of friends had no symptoms and they figured they were more likely to catch covid-19 in New York City than in Australia, news.com reported. 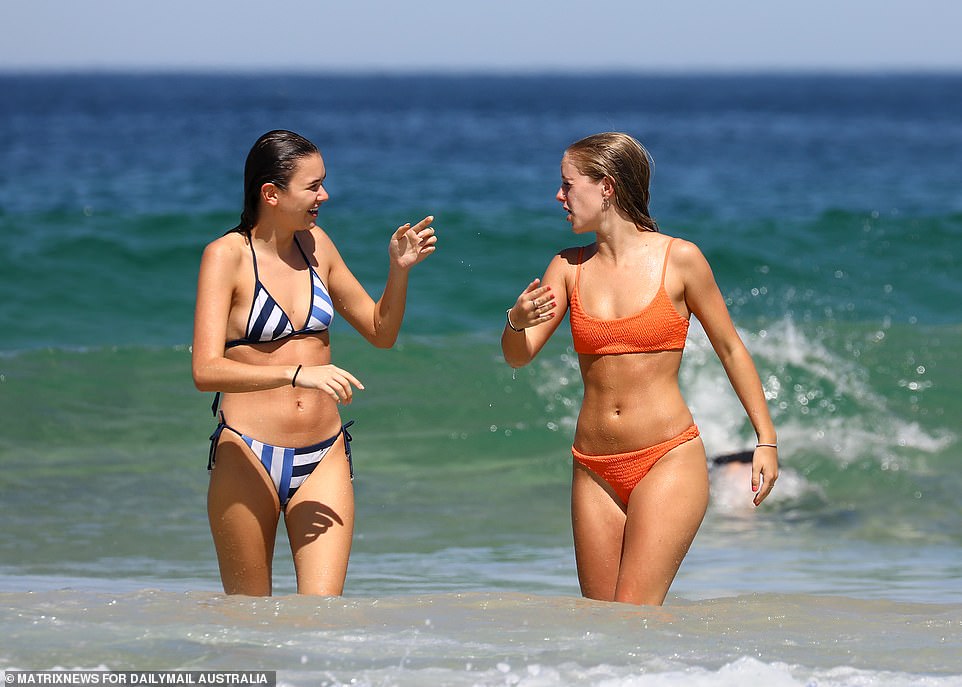 ‘Due to our age the virus is unlikely to get us,’ she said.

The Americans were among crowds of young people splashing in the ocean at Bondi Beach in 31C heat on Thursday.

Radio 2GB host Chris Smith said on Friday that the young people were being ‘ignorant’ and that it was ‘a tad dangerous’ to be flouting the rule deliberately.

‘It is only a metre and a half. Sharing the vapour and all the spittle and the rubbish that you share when you are really close with a person, that’s all they are trying to separate you for,’ he said. 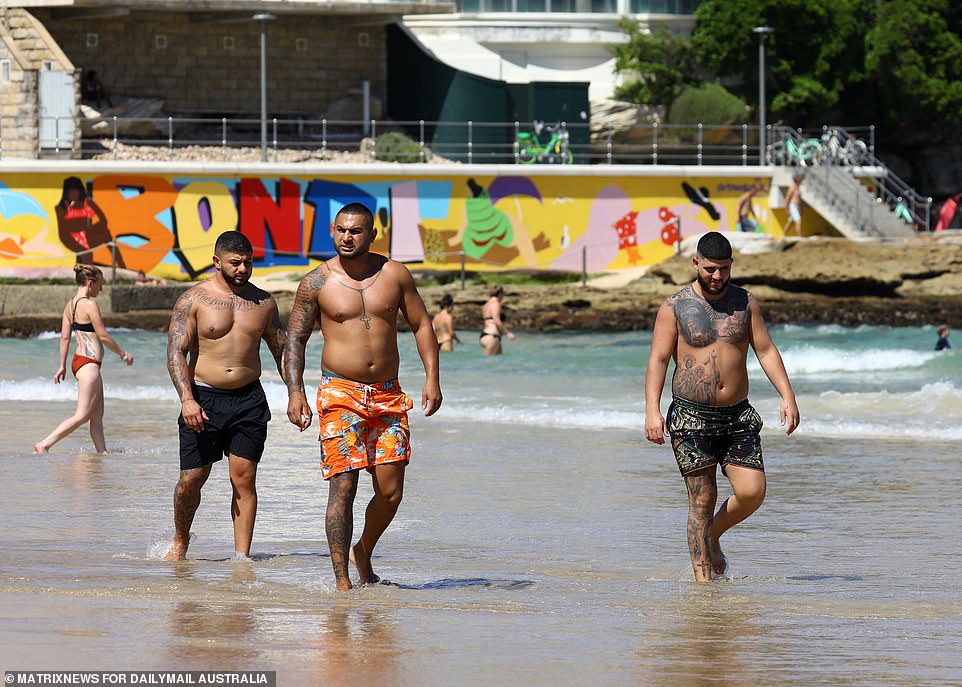 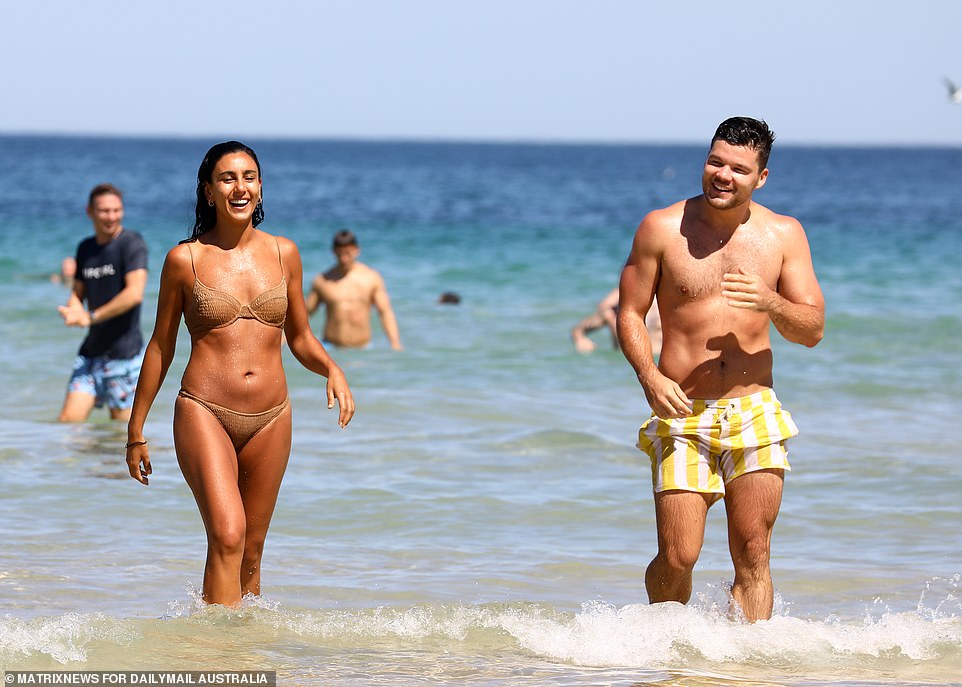 A man and woman are all smiles at Bondi Beach on Friday, despite the recommendation of health authorities to stay inside 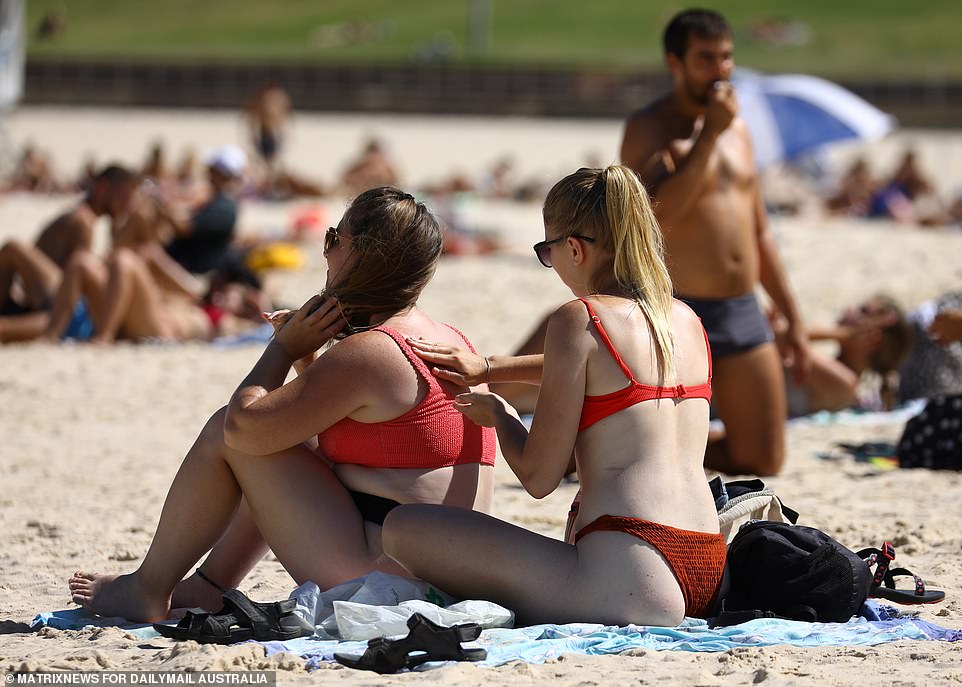 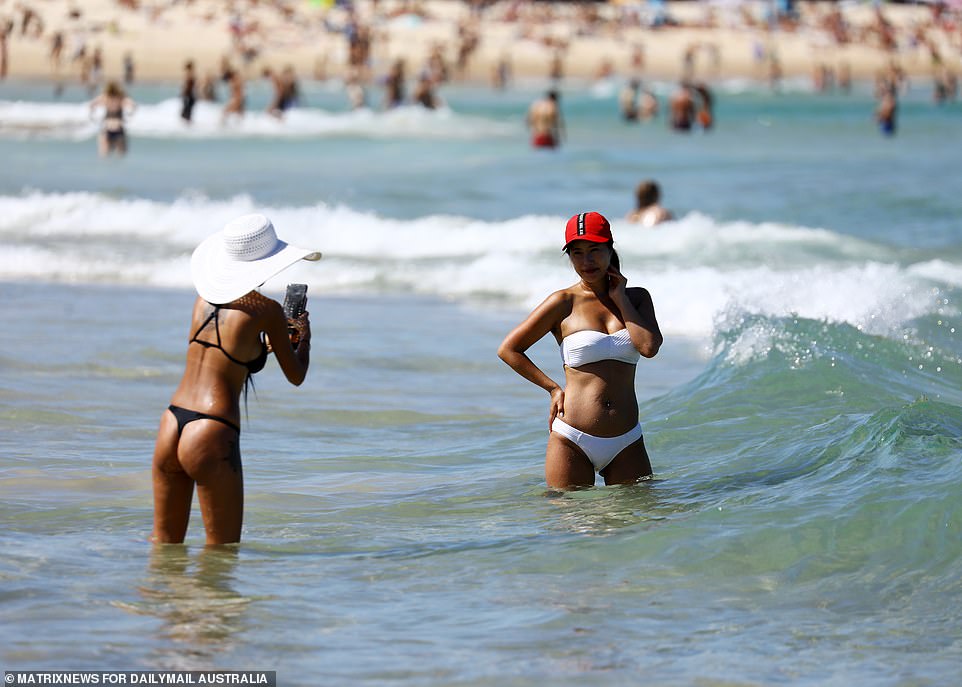 England’s Chief Medical Officer Professor Chris Whitty warned on Thursday that it was a mistake for young and healthy people to think they would just ‘breeze through’ the pandemic.

NSW Premier Gladys Berejiklian has again urged people to socially distance themselves to reduce the spread of the virus.

‘What we want to make sure is if we control the spread and keep the numbers very low as to who is actually needing to go into intensive care – and at the moment it’s only a handful of people who are in hospital because of this illness – that’s where we want to keep it,’ she told the Nine Network on Friday.

‘We are not on top of it and nobody is, but we are still at a stage where we’re managing it and we don’t want to lose control and that’s why it’s important to socially distance.’

The Bureau of Meteorology declared summer was ‘making a late run in NSW’.

‘Temps above average in many areas today including Sydney, 36 degrees, Bourke 37, Newcastle 35 and Dubbo 33,’ the Bureau tweets on Friday.

‘A cooler southerly change will reach central parts of the coast later today.’ 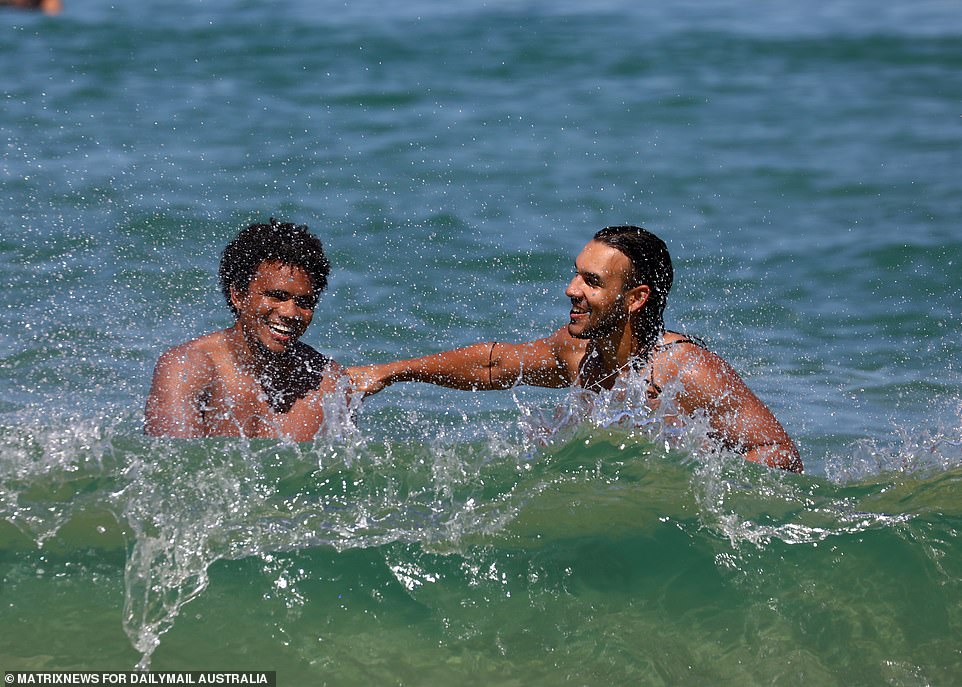 Two beachgoers splash in the waves and ignore the 1.5 social distancing recommendations 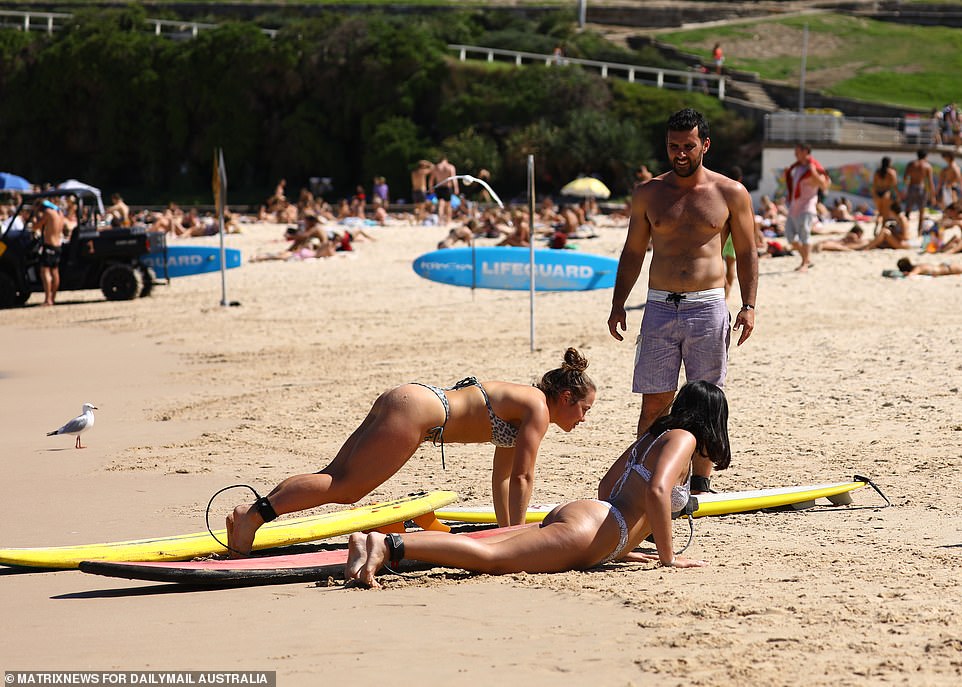 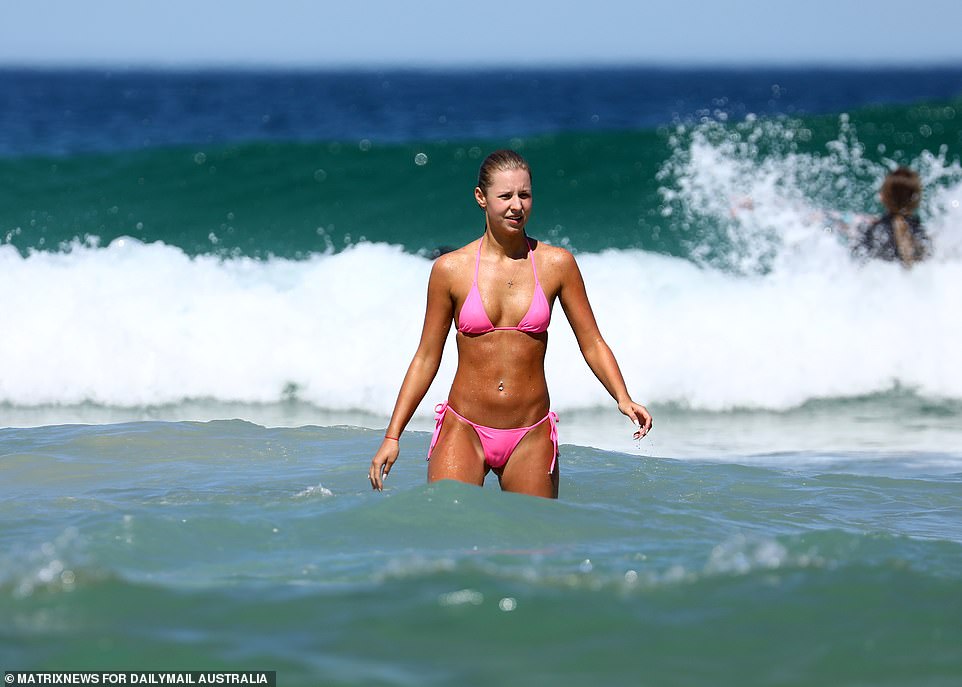 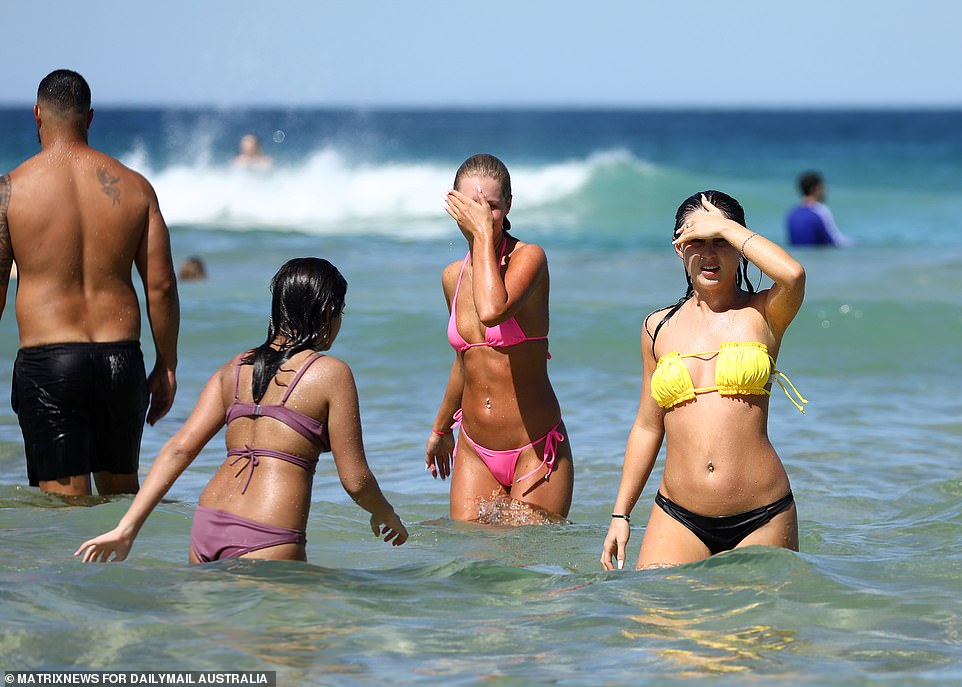 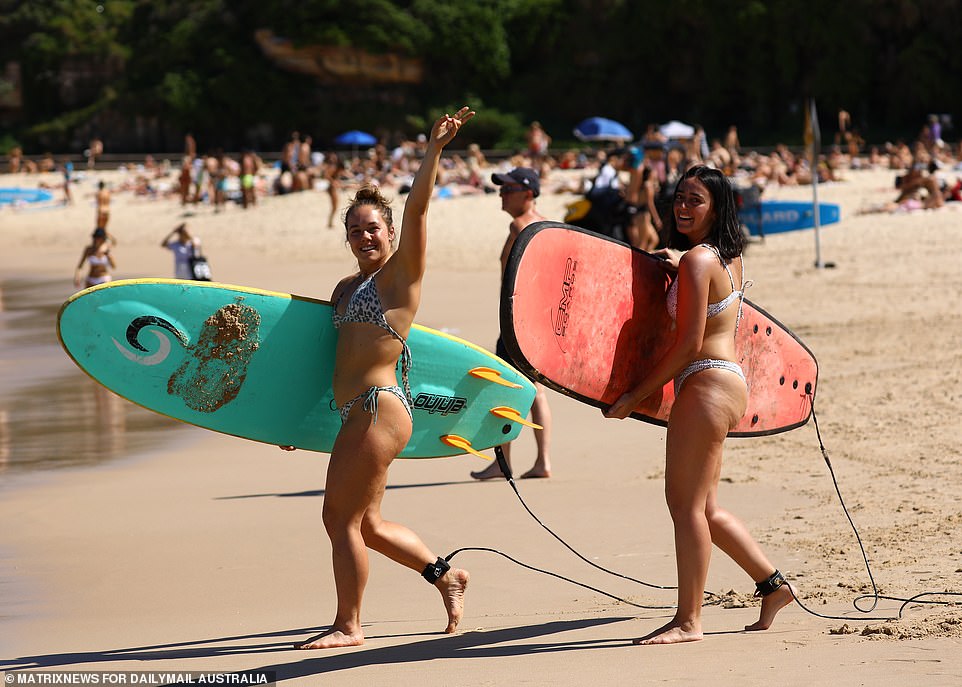 Australian Kookaburra is spotted in Devon garden 10,000 miles from his...

The women using lockdown to paint beautiful wall designs to give...