Twitter announced on Friday that it is making changes to its platform to help combat misinformation around Election Day and voting.

In a blog post, the social media site said it is adding new labels, warnings and prompts under tweets that falsely claim a candidate has won or tweets that incite violence or interfering with election results.

Additionally, the company will not allow users to ‘like’ or retweet posts from candidates if they have a misinformation or violation label attached.

The adjustments comes after users complained that fact-checking labels, often tied to tweets made by President Donald Trump, were not enough to counter false and misleading information ahead of the 2020 presidential election. 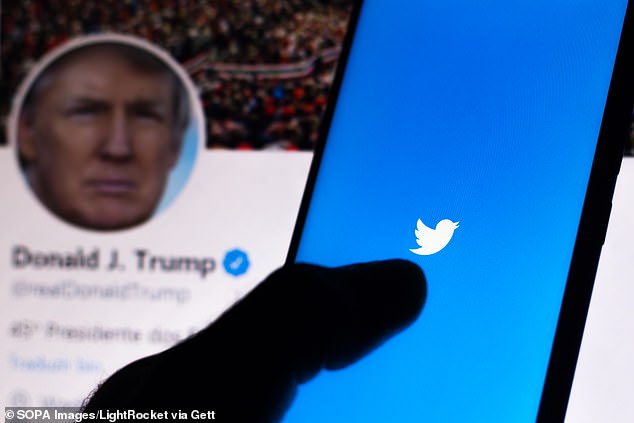 On Friday, Twitter announced it was making changes to its platform to combat misinformation around the 2020 election and voting 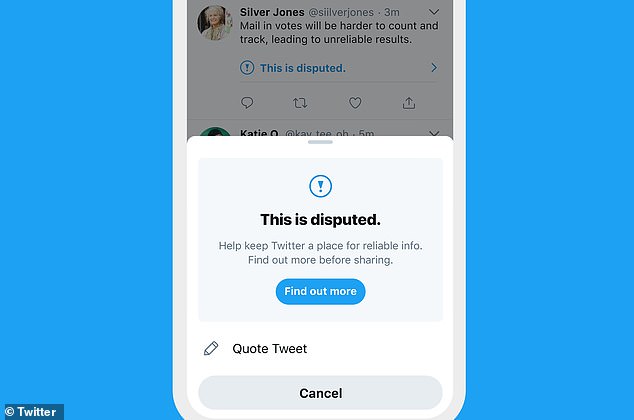 Under the changes, new prompts will appears (pictured) before users can retweet tweets with misleading information and candidates will not be allowed to claim victory state election officials or news outlets make announcements

‘Twitter has a critical role to play in protecting the integrity of the election conversation, and we encourage candidates, campaigns, news outlets and voters to use Twitter respectfully and to recognize our collective responsibility to the electorate to guarantee a safe, fair and legitimate democratic process this November.’ the blog post reads.

‘As with any other product change, we will learn, observe, and iterate based on the impact of these changes, to inform both our strategy around future global elections and Twitter’s overall product experience

Since 2018, Twitter has already introduced several measures to protect the integrity of elections and combat misleading information.

It also added labels and warnings to potentially harmful misleading information about the coronavirus pandemic and mail-in voting.

CHANGES TWITTER IS MAKING TO COMBAT MISINFORMATION AROUND THE  2020 ELECTION

1. Candidates will not be allowed to claim victory until ‘either an announcement from state election officials, or a public projection from at least two authoritative, national news outlets’

2. Tweets will be removed that encourage violence and call for election result interference or polling place interference

4. Retweets and likes will be turned off on misleading tweets for political accounts with more than 100,000 followers

5. New options encouraging people to quote-tweet to add their own commentary

6. Terms trending in the ‘For You’ tab will be accompanied by a tweet or article explaining why the term is trending

Many of these measures have been used to  fact-check misinformation, including from President Trump.

Earlier this week, in one instance, Trump tweeted: ‘THE MEDIA IS CORRUPT, JUST LIKE OUR DEMOCRAT RUN BALLOT SYSTEM IS CORRUPT! Look at what’s happening with Fake, Missing and Fraudulent Ballots all over the Country??? VOTE.’

This was accompanied by a label that read: ‘Learn how voting by mail is safe and secure.’

Under the new policy, tweets will be labeled as false if they claim a win for a candidate, encourage violence or call for interference with election results or polling places.

Additionally, candidates for office will not be allowed to claim an election win before it is called either by election officials or two national news outlets.

This appears to be aimed at Trump, who is feared to claim victory in the presidential election before all mail-in ballots have been counted.

‘Tweets which include premature claims will be labeled and direct people to our official US election page,’ the blog post reads.

‘Tweets meant to incite interference with the election process or with the implementation of election results, such as through violent action, will be subject to removal.’

Additionally, if people attempt to retweet tweets with misinformation, a label will appear prompting users to credible information on the topic.

New warnings are also being added to US political figures who have accounts with more than 100,000 followers.

If a warning of misleading information is attached to the tweet, users will have to tap through the warning to the tweet.

Retweets and likes will be turned off and users will be only be able to Quote Tweet, meaning they have to add their own commentary.

‘We expect this will further reduce the visibility of misleading information, and will encourage people to reconsider if they want to amplify these Tweets.’ 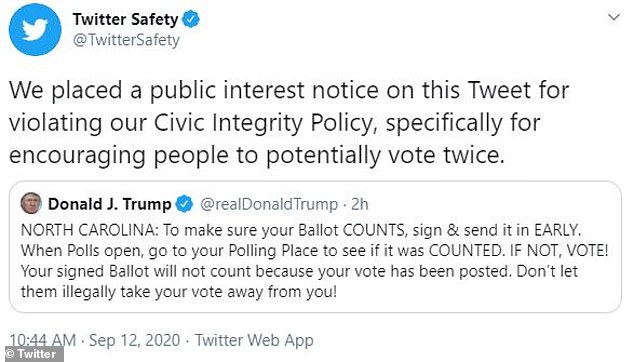 Retweets and likes will be turned off on misleading tweets for political accounts with more than 100,000 followers rather than just attaching a mis-leading label

Starting on October 20 and at least lasting through the end of Election Week, people will be encourage to Quote Tweet all tweets rather than just retweeting.

‘Liked by’ and ‘followed by’ recommendations from people users do not follow will no longer show up in timelines,

Lastly, when terms trend in the ‘For You’ tab, there will be a tweet or article explaining why the term is trending.

Twitter is not the only social media company that had pledged to combat misinformation ahead of the election.

Both Google and Facebook have pledged to ban political ads after polls close on November 3.

Facebook also has said that it will add a banner at the top of its news feed on Election Day to warn users that no there is no declared winner until news outlets make the announcement.

This is an effort to avoid what occurred in the 2016 presidential election in which Russian officials used social media accounts ti spread false information.