The UK’s Brexit envoy has followed his counterpart Michel Barnier into self-isolation after showing ‘mild’ signs of coronavirus, it emerged today.

David Frost, 55, is avoiding all social contact in case he has contracted the disease, in a fresh blow to hopes of making progress with trade talks.

The move will fuel speculation that the post-Brexit transition period will need to be extended beyond December, as the globe struggles to get a grip on the raging pandemic.

The sides have already announced the postponement of the latest round of negotiations, which had been due to take place in London this week.

However, Boris Johnson has so far dismissed the idea of an extension to the ‘standstill’ transition, pointing out that the December 31 deadline is enshrined in UK law. 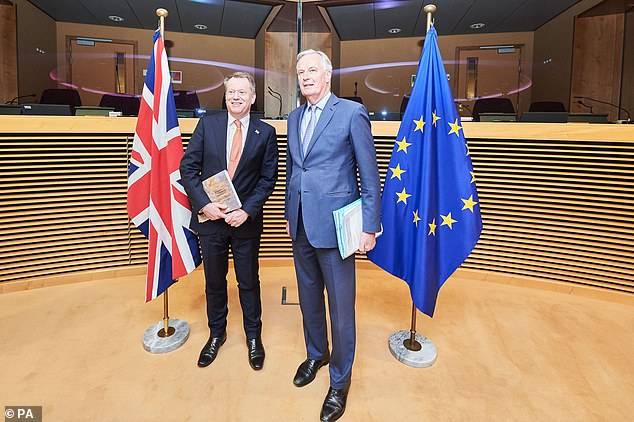 Mr Barnier revealed he had tested positive yesterday, insisting he was ‘doing well and in good spirits’ and would be ‘following the necessary instructions’ along with his staff.

‘I’m as well as I can be, strictly confined to my home. I’m fine, morale is good,’ the Frenchman said in a video posted on Twitter.

Mr Barnier, 69, was the highest-profile EU official to be confirmed as a Covid-19 patient since the outbreak began.

The European Commission sent most of its workers home on Monday, with only a few coming in to perform ‘critical functions’ in shifts.

Around 32,000 people are employed by the Commission, mainly in Brussels but also in Luxembourg.

The EU is imposing an entry ban on travellers from outside the bloc for 30 days, but it does not apply to the UK.

The ban will not affect Europeans returning home, social workers or cross-border workers.

Barnier revealed his diagnosis on Twitter yesterday, tweeting in French and English to say he had been confirmed as a Covid-19 patient

Nigel Farage, who has frequently clashed with Mr Barnier, today wished him a speedy recovery

Bomb squad called to Windsor Road, Northmead, Sydney, where tradie is laying on the road