By Lydia Catling For Mailonline

A woman was left disappointed to find a ‘pathetic and disgusting’ amount of chocolates inside a £10 novelty Christmas tin of Lindt balls.

Nikki Gittens shared her dismay at the number of sweet treats with the Extreme Couponing and Bargains UK Facebook group after she opened the brand new tin – to the horror of many other keen bargain hunters.

Other people were quick to suggest the company had been ‘stingy’ with the number of Lindor chocolates inside while another pointed out the advert states the tin contains 32 treats – the same amount as Nikki had in hers. 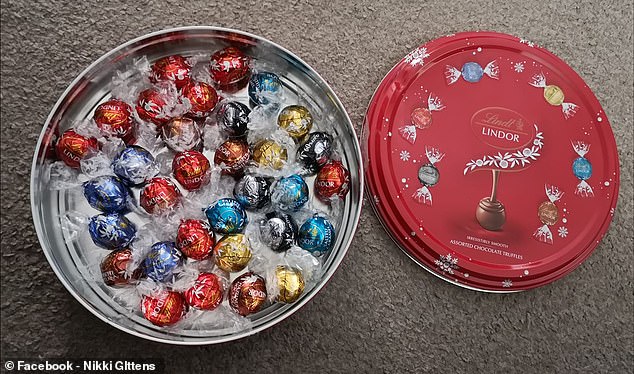 Nikki Gittens, believed to be from the UK, opened her £10 novelty Christmas tin of Lindt Lindor chocolates and said she was disappointed by the ‘pathetic and disgusting’ amount she found inside 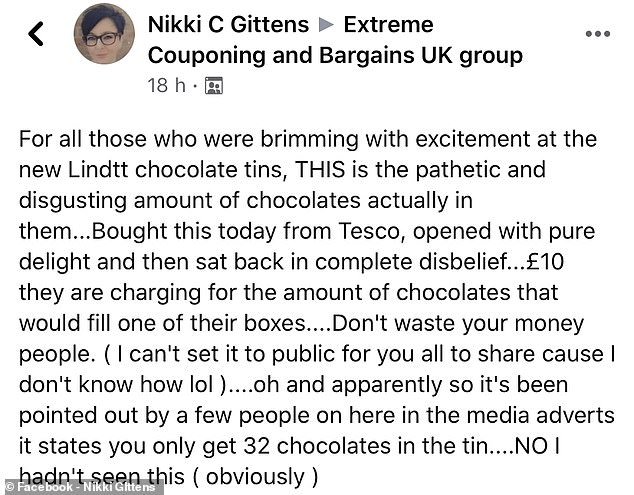 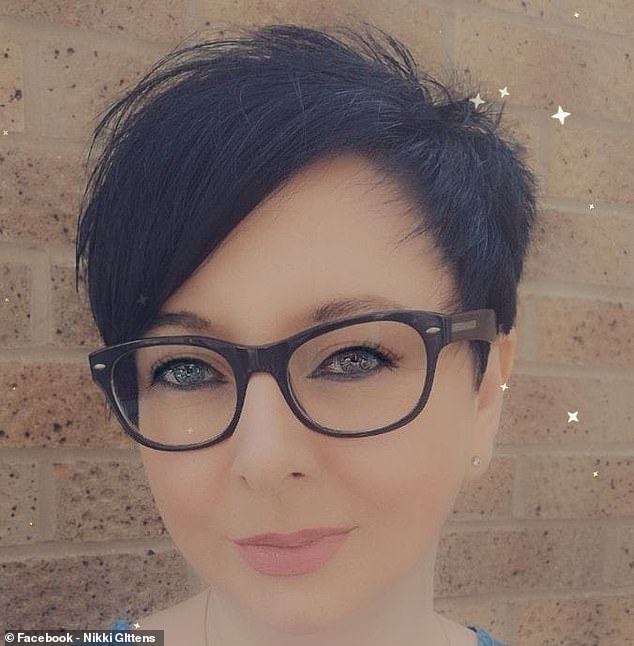 A regular 200g carton of Lindt Lindor Assorted Truffles costs £4.99 and contains 16 truffles, therefore the tin is no more expensive than buying two boxes, but unhappy shoppers were still not satisfied.

Disgruntled customer Nikki warned other people who may be ‘brimming with excitement’ at the prospect of buying the product that they may be disappointed.

Taking to Facebook Nikki, who is a key worker, said: ‘For all those who were brimming with excitement at the new Lindt chocolate tins, this is the pathetic and disgusting amount of chocolates actually in them.

‘Bought this today from Tesco, opened with pure delight and then sat back in complete disbelief.

‘£10 they are charging for the amount of chocolates that would fill one of their boxes.

Thousands of people took to the comments in the group, which as more than 1.5million members, to share their disbelief at the number of Lindor included.

Other keen bargain hunters replied to Nikki’s post to express their anger about the chocolate brand’s new product, with one branding it ‘disgusting’ and another accusing Lindt of being stingy

In response, one couponer said: ‘Honestly thought that was an almost empty tin by the picture.

‘Was super excited until I saw you said that was literally it. Disgusting. Not gonna bother. ‘

Another said: ‘That would only last five minutes in our house. Stingy!’

‘I was going to get this for my partner but won’t now. Thanks for sharing. So hope someone at their head office sees this,’ added one less than impressed member of the group.

Although most people in the group were baffled by the £10 price tag for the chocolates, with the post gaining a whopping 13,000 comments, others pointed out the company’s advertising clearly stated there would be 32 inside.

Nikki said she had not seen the advert prior to buying the tin and sharing her disgust with the group.

She said: ‘So it’s been pointed out by a few people on here in the media adverts it states you only get 32 chocolates in the tin. No I hadn’t seen this, obviously.’

Jason Isaacs claims people who don’t wear face masks should be ‘hanging in the streets!’

Boy, five, learns he has brain tumour one month after his father, 49, died

Boy, five, learns he has brain tumour one month after his...

Welsh couple whose TV knocked out village’s internet for 18 months...