A woman has transformed her ugly 1930s family home into a stunning five bedroom modern masterpiece by splashing £250,000 on an enormous extension.

Katy Wilson, 36, from Derbyshire, bought her detached three-bedroom property  back in February 2015 and spent years applying for planning permission to overhaul the entire house.

She was finally able to get started on the renovating three years on, in 2018, and she gave the property a complete transformation with the help of a huge modern two-storey extension.

Katy, who estimates she spent £250,000 on the huge project, told LADbible she had no regrets over the giant undertaking, revealing: ‘I’ve learned so many skills during this past year, and attempted things I didn’t even think I could do. It saves you money and is very satisfactory.’ 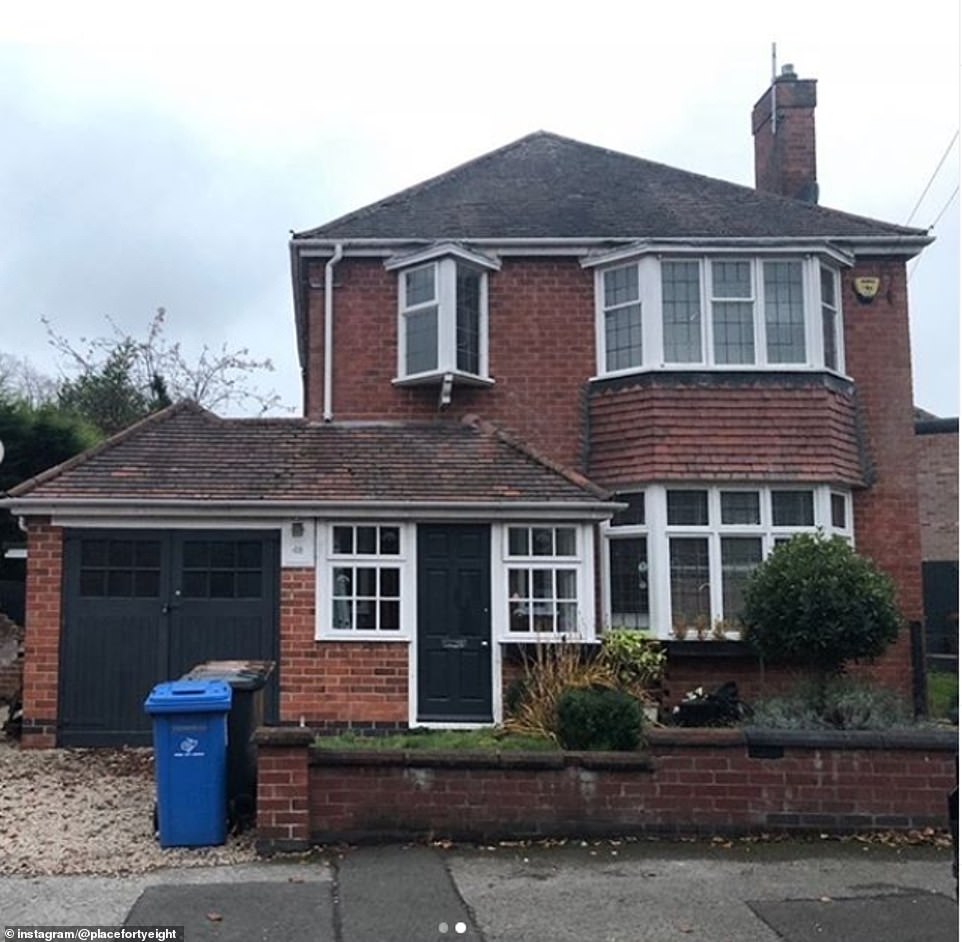 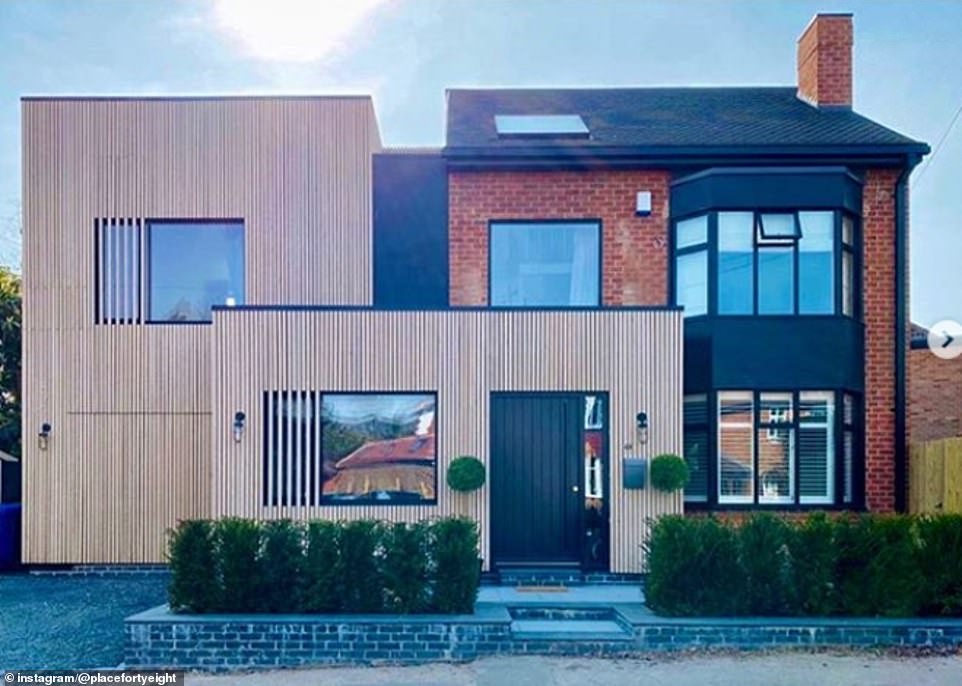 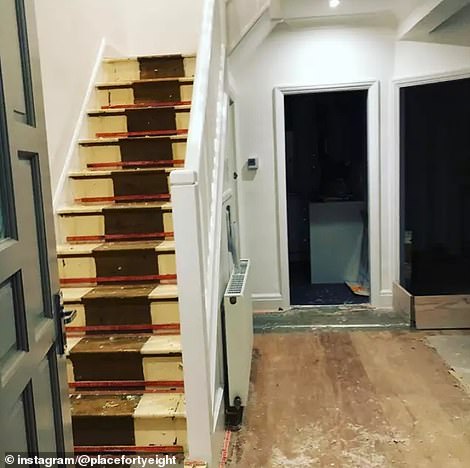 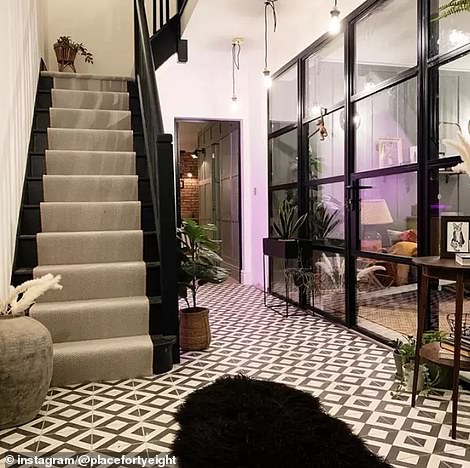 Rather than simply adding an extension to the property, Katy transformed the entire interior, ripping out the dated and drab decor and adding splashes of colour and personality (left, before, and right, after)

While the house may have had strong curb appeal before the renovation, Katy, who has gained 41,000 followers on Instagram while documenting the project online, insists the interiors needed a lot of work.

While it was listed as a 2.5 bedroom property, the third bedroom wasn’t even big enough for a single bed.

Meanwhile the family home also only had one bathroom.

After buying the home in 2015, Katy decided against simply adding an extension to boost the square footage. 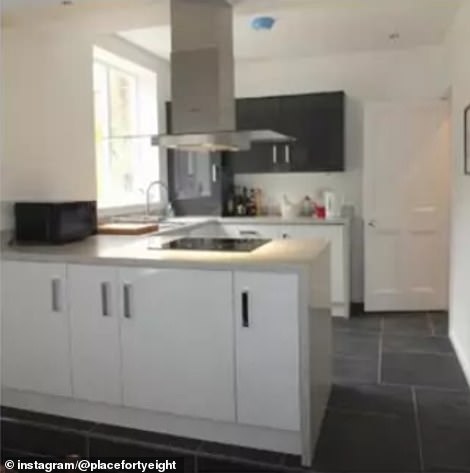 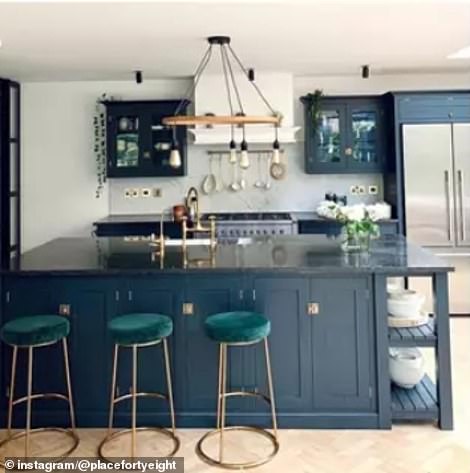 One of the largest transformations came in the form of the kitchen, which was  modern and lacking personality before Katy’s renovation (left). After building two enormous extensions, she was able to build a much larger kitchen (right) 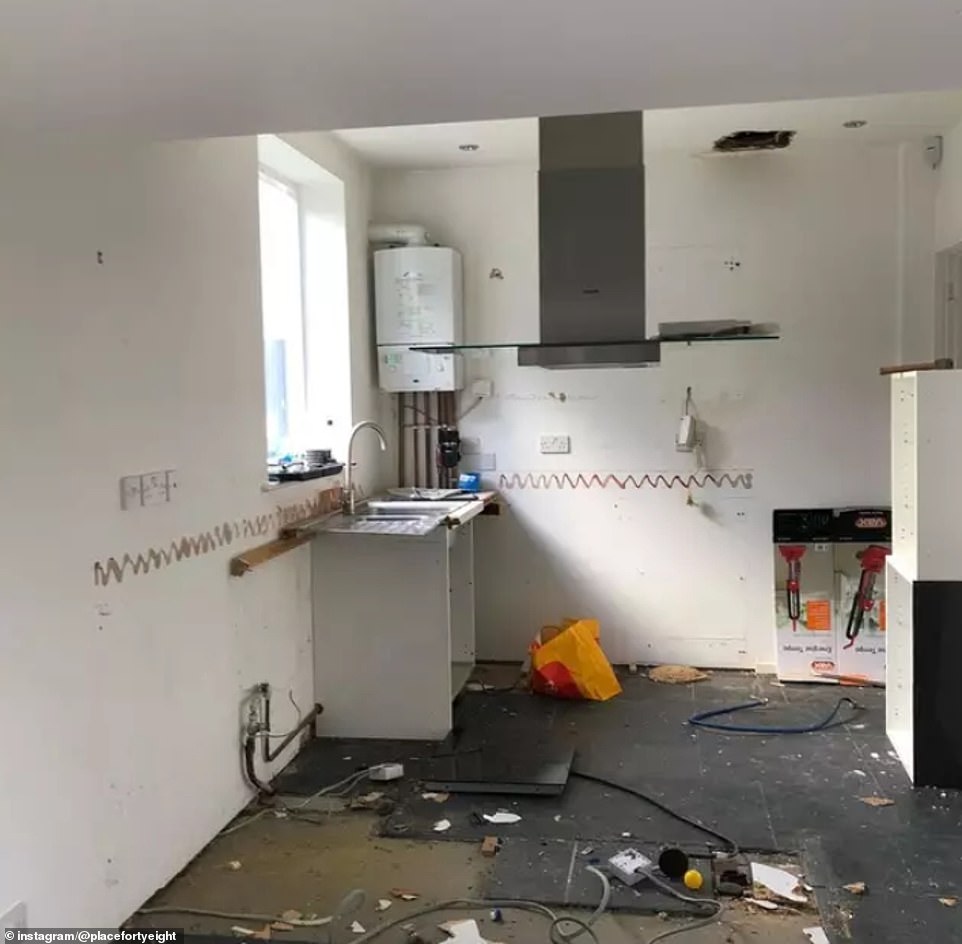 Katy ripped out many of the property’s features, including the white and grey kitchen, leaving just a shell, before she began transforming the space

Instead she decided to give the entire exterior of the home a complete overhaul, adding two extensions to the property.

Katie explained she applied for planning permission in 2016, which took 12 months for approval, adding there was ongoing ‘back and forth with the local council’ on her dramatic plans.

The delay meant she was unable to even start the project until October 2018.

She spent the next two years adding a two-storey side extension with two new bedrooms with en-suites, a new office and a roof terrace to the home. 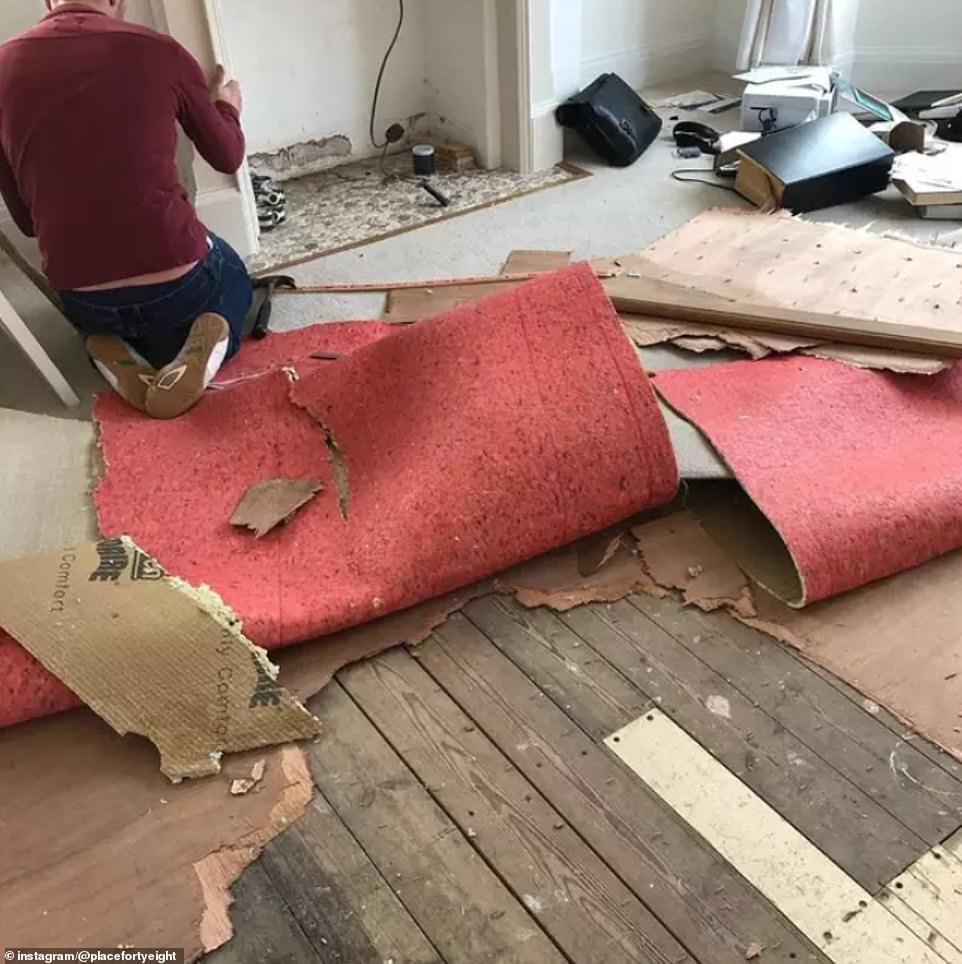 Meanwhile she also added a single storey extension at the front of the home, with a new kitchen, utility, toilet, snug and playroom.

Meanwhile Katy also renovated the existing property, giving the whole building a modern upgrade to tie in with the chic minimalist exterior.

She stripped back the rest of the property to plaster before rewiring and adding bespoke joinery and underfloor heating across the house. 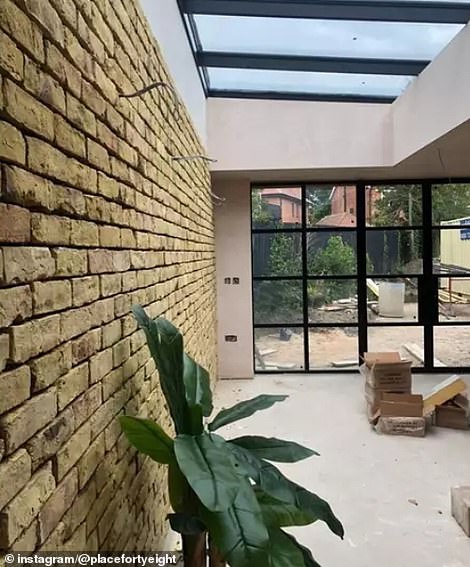 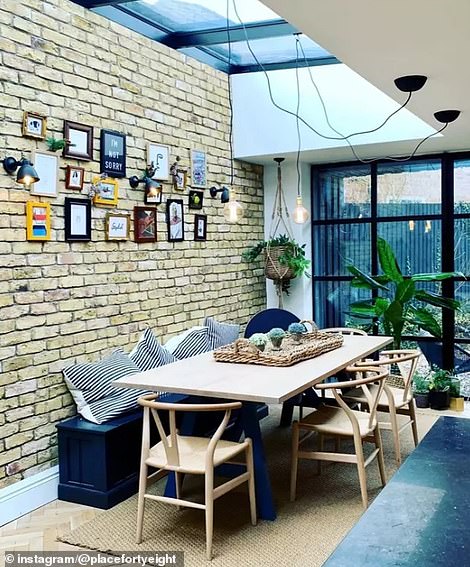 The stunning extension features a trendy exposed brick wall with a large ceiling window allowing light to flood into the space, which Katy uses as a dining room 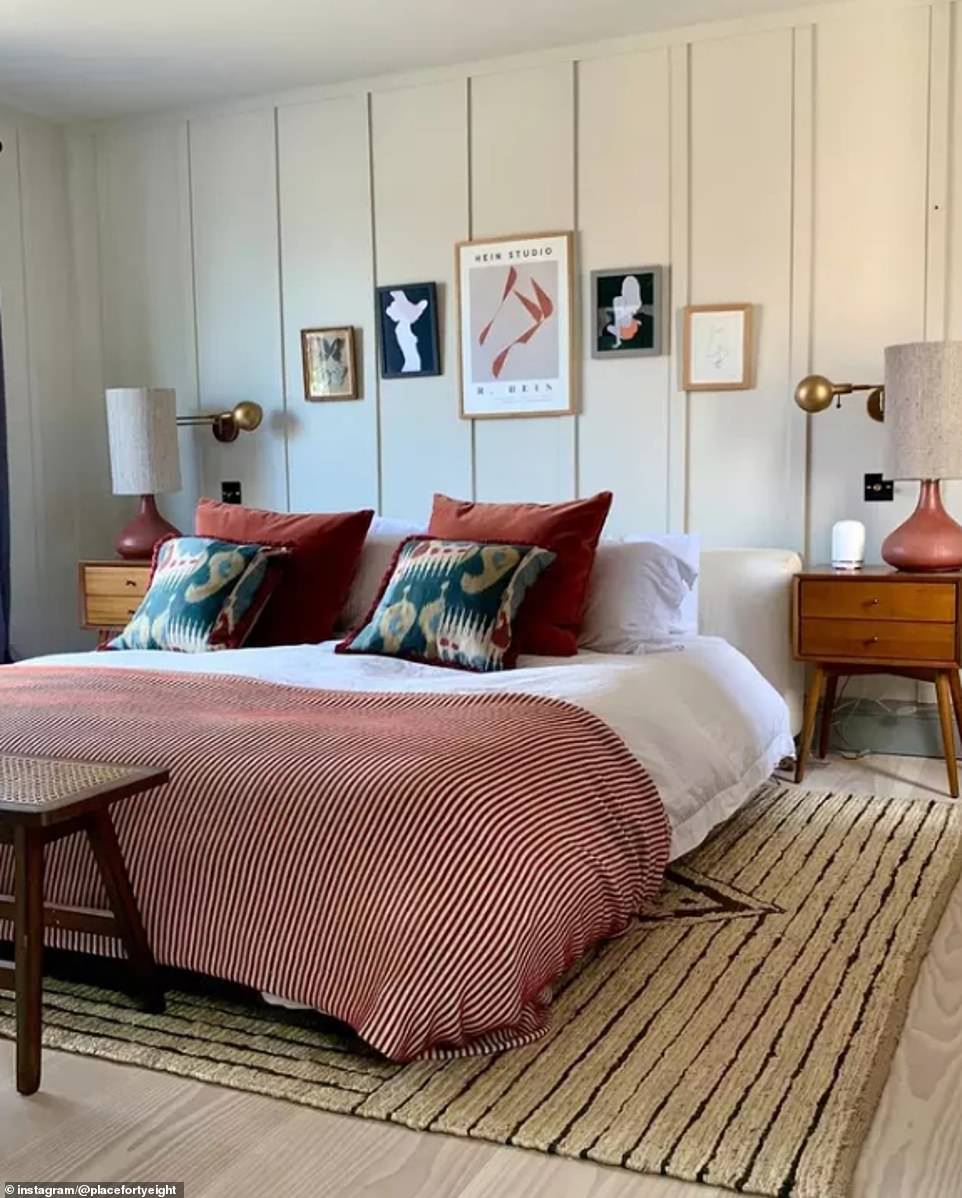 Katy admitted her favourite room is the luxurious and lavish master bedroom, which has an en-suite and separate in built wardrobe space

She admitted the trickiest part of the entire renovation was going through planning to get the contemporary modern cladding for the house passed.

She added that her new favourite room is the bedroom, with the couple adding a partition in which to hide the television, creating a ‘beauty station’ on the other side.

Meanwhile Katy also revealed the additional space had given her room to add an inbuilt wardrobe with a sliding door. 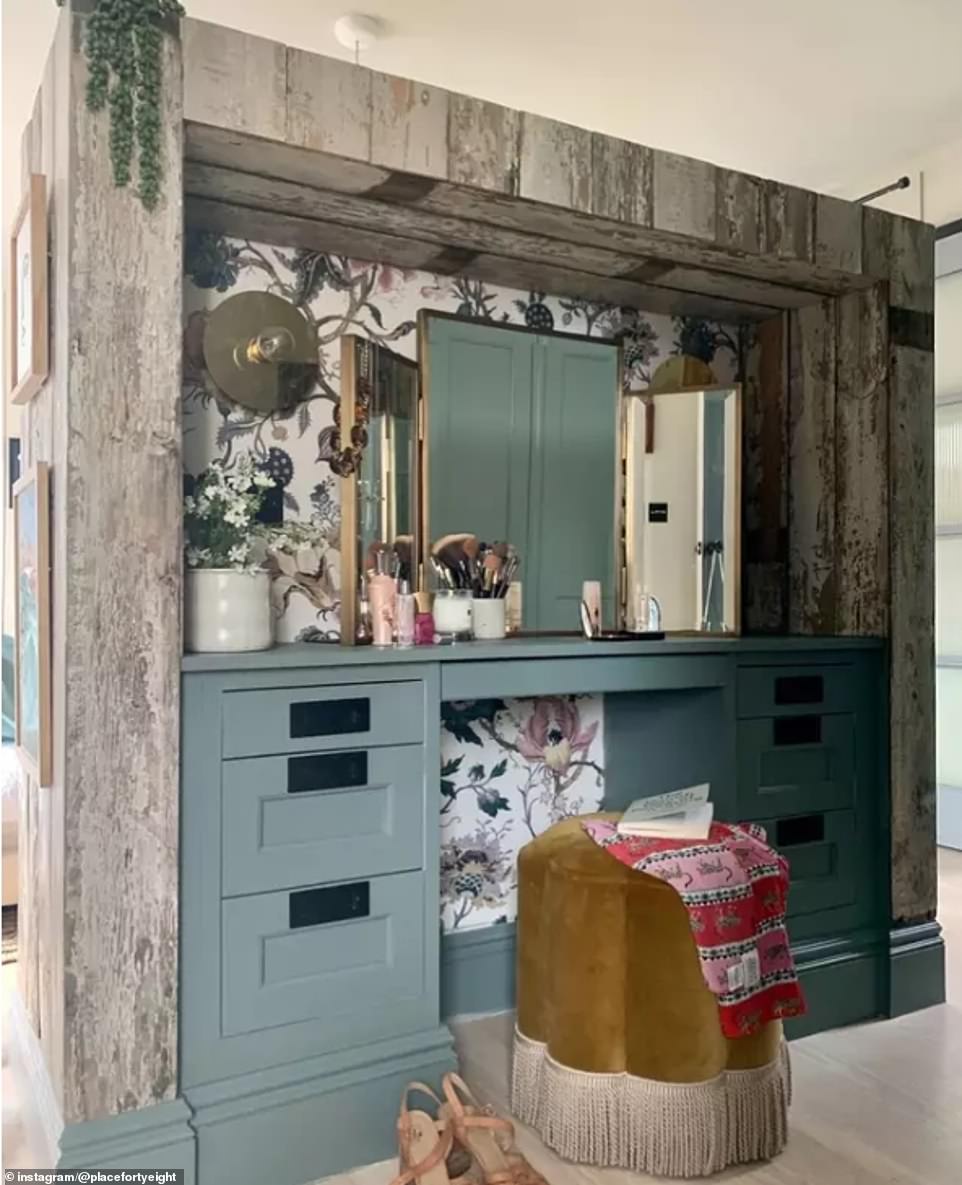 The room has been cleverly designed to work for Katy and her family, with the DIY enthusiast creating a beauty counter space in a corner of her master suite

She explained: ‘Inbuilt storage or bespoke carpentry doesn’t cost the earth, and can really elevate a space. I would always recommend storage solutions as part of your project planning – and trust me, you will thank yourselves later.

‘Research is so important – good preparation brings less stress further down the line.’

She estimates the cost of the project, as well as landscaping the garden, was £250,000 – but said it was all worth it, and it wasn’t ‘as scary’ as she might have initially feared.

Only 10% of Manhattan’s 2 million office workers have returned to...

Woman, 56, who lost her entire NOSE to skin cancer gets...