Some investment experts believe the old adage to ‘sell in May and go away’ might be something to think about this year – even though we can’t physically go away.

When looking at the performance of global markets from the end of May to the end of August, selling in May has only worked in 17 out of the past 50 years.

That means generally, investors have been rewarded by remaining invested. Despite this, the idea of selling as the summer starts might be compelling to some because in the years markets have fallen, the fall has tended to be quite sharp. 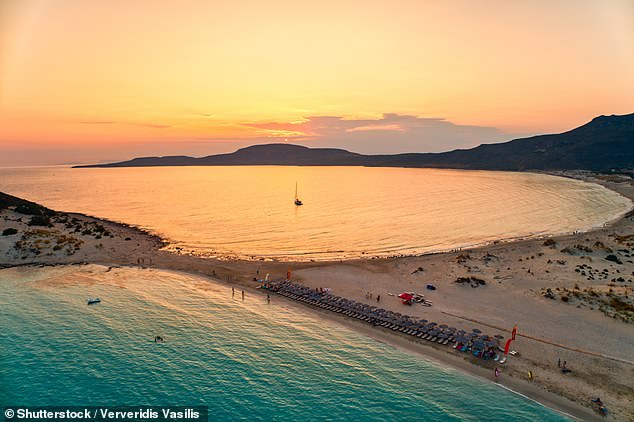 Due to restrictions implemented by various governments across the world to halt the spread of the coronavirus, the prospect of ‘going away’ isn’t looking likely for most at this stage

He added: ‘This is compounded by the fact that major decision-makers – across markets, in senior teams at big corporates, in Governments and so on, tend to be on the beach and have their eye off the ball.’

So does the mantra still stand this year? The market certainly has fallen – and significantly at that. Though this began well before Spring and had a very specific trigger: Covid-19.

There have only been two successful ‘sell in May’ years (in the sense that global equities have fallen) since the global financial crisis. Might 2020 be the third? 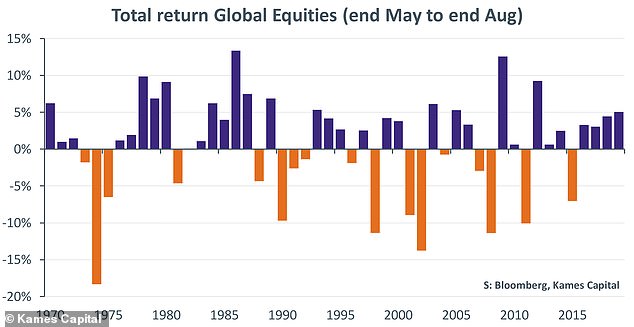 Should we expect a summer lull?

The idea behind the saying is to sell stocks late in May and return to the market towards the autumn, based on a theory that stocks experience a summer lull.

It dates from the time when stockbrokers would typically leave their desks to enjoy the summer ‘season’ and ends with the St. Leger flat race in Doncaster in the middle of September.

Jones said: ‘Global equity markets have risen powerfully, up by 26 per cent since their mid-March low, buoyed by the prospect of economic revival and fuelled by unprecedented monetary and fiscal support.

‘Impressive as this has been, markets are still 16 per cent below levels reached in February. It is perhaps then not too challenging to believe that while Covid-19 will pass, the policy support will endure and if so, this rally could easily continue – after all, equity investors love to dream.’

Unfortunately, as Jones points out, the market has detached from the real economy. While re-opening is underway, as with the virus itself, the process of economic recovery is likely to prove long and challenging.

He added: ‘Those businesses that survive the shutdown, and not all will, will find that the cost of doing business will have risen significantly and many will find that their fixed overheads are too high a hurdle to jump.

‘As a result, it is likely that aggregate corporate earnings will take several years to recover which leaves the valuation of stocks stretched with little to cushion disappointment.

‘Looking into the summer months, it is inevitable that challenges will emerge, and recent years have seen each successive shakeout happen faster and sharper each time.’

‘We may not be able to holiday as we would have liked this summer, but that doesn’t mean that you can’t offer your savings a much-needed time out. Perhaps now is the time to leave you investments alone and come back to them in September.’

While Jones isn’t necessarily advising investors to sell – he doesn’t believe now is the best time to buy.

Origin of the phrase

This phrase refers to a custom of aristocrats, merchants, and bankers who would leave the city of London and escape to the country during the hot summer months.

St. Leger’s Day refers to the St. Leger’s Stakes, a thoroughbred horse race held in mid-September and the last leg of the British Triple Crown.

Similarly, RWC Partners’ Clark Fenton said investors ‘should not be enticed into buying equities at these levels with so much uncertainty,’.

In the US in particular, emergency measures from the authorities have been praised by investors, and the S&P 500 saw a bounce bank in recent weeks.

However, Fenton said this still doesn’t provide a sufficient margin of safety as even though the index is no longer down 30 per cent as it once was in March, it remains in the red, down 11 per cent year-to-date.

The manager of the RWC Diversified Return fund, said while the rally has left the S&P 500 close to pre-crisis levels, it could also be short-lived, with the US Federal Reserve merely preventing an insolvency event so far.

He said: ‘We are not out of the woods yet for risk assets, not by a long way.

‘What we’ve had so far is a big liquidity response to prevent a complete tailspin for markets. That has worked, but there’s still so much insolvency risk out there, not only from companies but also the longer-term impacts of this as it changes our behaviours.’

‘As a result, now is not the time to buy equities, like it was during the sell-off that followed the 2008 financial crisis, with potentially more pain to come and fresh lows for the S&P 500 and other indices.’

Fenton warned there are so many unknowns, with many companies not issuing guidance.

‘All you can do on an individual-stock level is ask what is already in the price, and for a lot of stocks it simply looks too early to make a move back in.

‘Until we see the longer-term impact of the virus on the economy and real balance-sheet repair, we can’t be sure we are near the bottom. Liquidity provision and more debt are simply not enough.’