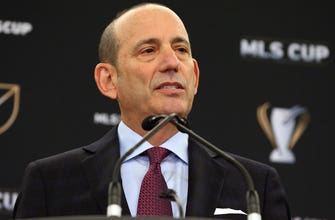 Major League Soccer plans to cut the pay of some executives and front office personnel while the season is on hold because of the coronavirus pandemic, a person with knowledge of the situation told The Associated Press on Wednesday.

MLS commissioner Don Garber and deputy commissioners Mark Abbott and Gary Stevenson will take 25% cuts in salary starting April 16, the person said on the condition of anonymity because the reductions were not announced publicly.

Other cuts would range from 20% to 10% for managerial staff. Lower salaried employees, like entry-level hires, would see no reduction in pay. The cuts were first reported by Yahoo Sports.

MLS does not plan to furlough or layoff staff at this time, although a hiring freeze is in place. The league employs some 300 people at its New York headquarters.

The MLS move comes after the NBA cut the salaries of some 100 top executives by 20% while the season is on hold. The NHL is cutting salaries for league employees 25% starting next month. NASCAR officers will have a 25% reduction in salary, while all other employees will have their salaries reduced by 20%.

The MLS season was suspended on March 12 after teams had played two matches.

The Philadelphia Union announced Wednesday that a player had tested positive for the novel coronavirus after experiencing mild symptoms.

How to make 1 golf course look like 2 different tournaments

Heartburn and indigestion drugs like Priolsec could increase the risk of...

Johnny Depp’s libel trial is shown a picture of his pillbox...